Opening a “dock-to-dish” concept in landlocked Denver may raise some eyebrows. Despite endless discussions over the sourcing of seafood and an ongoing raw bar trend, diners still seem preoccupied over the Mile High City’s sea-less status. To combat this, Blue Island Oyster Bar—the latest from Concept Restaurants, whose recent endeavors include Humboldt Farm, Fish and Wine—takes its fresh seafood ethos seriously.

Not only does Blue Island fly in seafood daily, and source many of its oysters from Long Island’s Great South Bay, the Cherry Creek concept has teamed directly with Chris Quartuccio, founder, and CEO of Blue Island Oyster Company to cut out the middleman. When asked about logistics, Quartuccio details a remarkable half-day journey, starting at 5 a.m. in the Great South Bay with a fresh shucker’s basket full of oysters, and ending on the restaurant’s bar, in a similar basket, in time for dinner.

What does this mean for Denver diners? The real deal when it comes to wild-harvested, diver-foraged oysters. 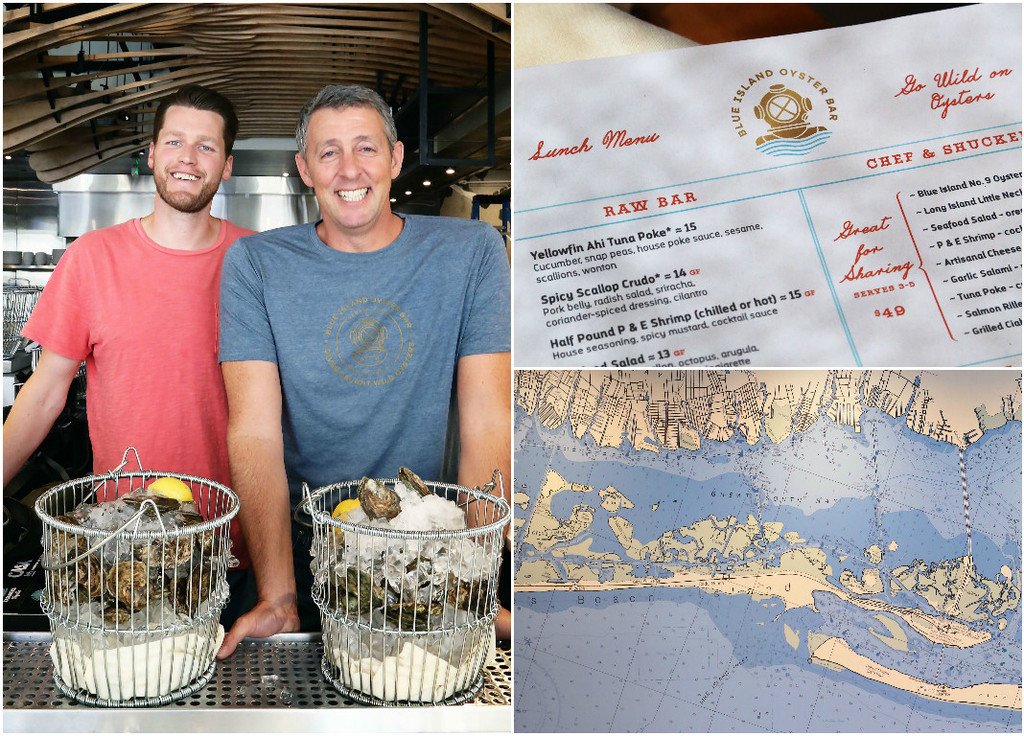 Sean Huggard and Chris Quartuccio. All photography by Danielle Webster

Blue Island has deep east coast roots and is heavily influenced by the food and culture of New England and New York. In addition to Quartuccio’s Long Island connection, Sean Huggard, Director of Operations, grew up south of Boston and cooked in Nantucket, and Executive Chef DJ Nagle—formerly of Humboldt—was raised, and got his professional start, in New York.

“It was important if we were going to serve raw, living animals to people that we really understood what went into it. We wanted to know where [the oysters] were coming from and that we could control the source and serve the best. Not just the best in the city, but the best in the country,” Huggard explained.

While Cherry Creek was not Concept’s first choice, the team is excited to open its doors in the recently revitalized area. “I think we need to attract a certain demographic that understands and finds value in fresh seafood,” says Huggard. “Cherry Creek just works.” 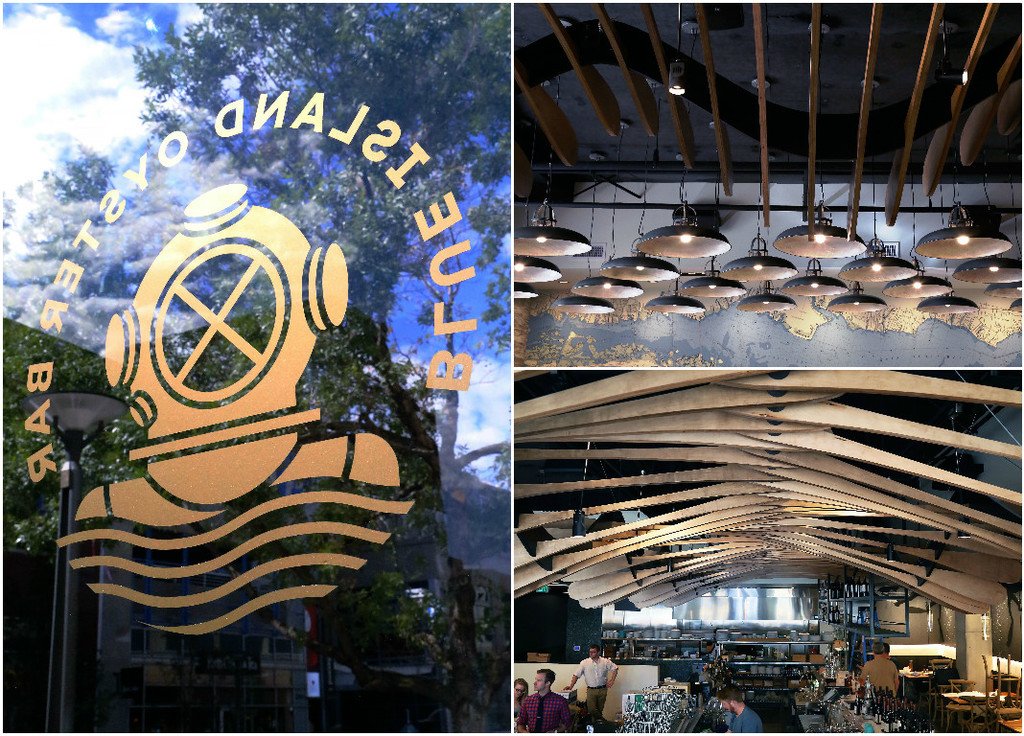 Space designed by Dianna Lynn along with Ken Andrews from Arch1.

Diners are first greeted by Blue Island’s opulent oyster shell entrance. Gray woods and muted blues envelop the expansive 100-seat space. The focus is the lavish raw bar and bordering open kitchen. While the restaurant features an installation above the bar that resembles oars and chairs that are seemingly constructed with driftwood, the coastal influences are lighthearted and refined. Blue Island is equal parts beachside oyster shack and Cherry Creek elegance.

What truly sets Blue Oyster a part from other seafood joints, however, are its subtle reminders of the origins of its sister farm. A detailed, full-wall rendering of the Great South Bay lines the western wall. Photographs of Quartuccio and his team of divers—including a shot of Dave Gum, a guy who Quartuccio tells me was one of the first divers on Long Island—are dispersed throughout the space. And the oysters are displayed directly on the bar in traditional shucker’s baskets. 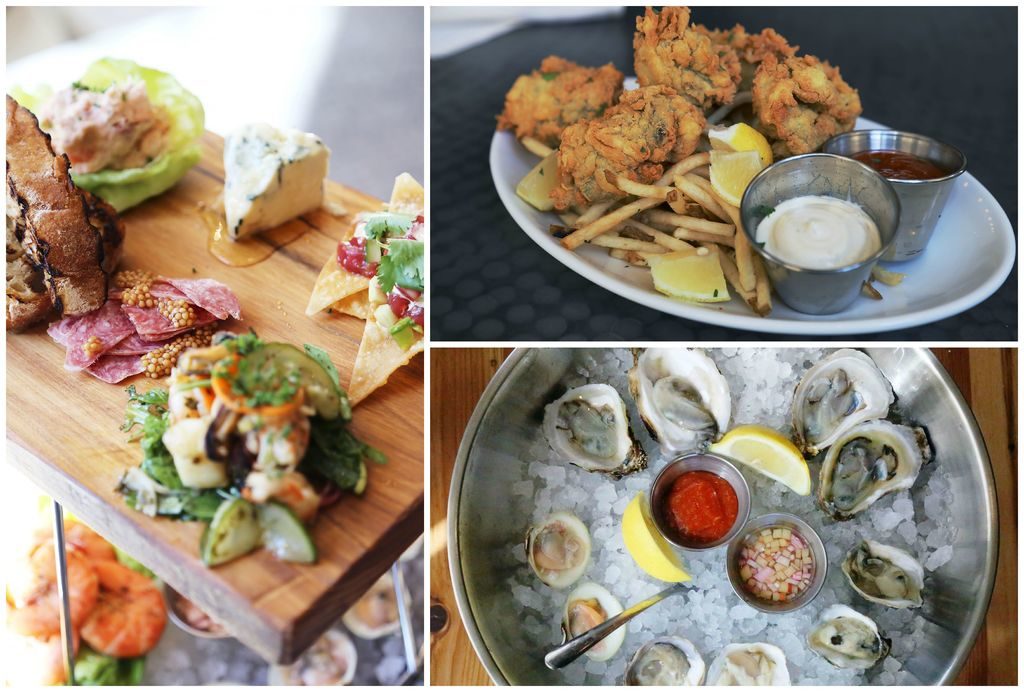 When asked about childhood tastes, Huggard and Nagle are quick to tell nostalgic stories of neighborhood bars serving fresh-caught baked cod and boardwalk clam shacks cooking up family recipes. A shared memory? “That smell,” said Huggard without hesitation, referring to the aromas wafting from Blue Island’s open kitchen. “Especially when the clams hit the frying oil.”

Capturing this essence is a common theme throughout the menu. While offerings such as the crab cakes and fried oysters stay true to their New England roots—and the menu does include non-seafood fare such as steak and burgers—Nagle’s menu is accented by creative interpretations of classics. The shareable Stuffies ($6), a savory Cape Cod baked clam classic, benefit from the addition of scallops, charred corn, and Linguiça sausage. The Fish & Chips ($16) utilize a crunchy cracker crust, and are noticeably lighter than traditional beer-battered versions. And the rotating Chef & Shucker ($49), designed to be shared amongst a table, revitalizes the oft-uninspired seafood tower with eccentric raw bar offerings—the current version features salmon rillette and tuna poke—and chef-inspired charcuterie. Deserts such as Key Lime Pie ($8) and the delectable Chocolate Cake ($10) are unfussy, and are meant to supplement the seafood.

The beverage program, headed by Humboldt’s Alex Curry, again emphasizes simplicity. In addition to familiar offerings such as mules and a Dark & Stormy, Blue Island offers colloquial favorites such as the Cape Cod and a Daiquiri ($10)—all of which will run for $5 during happy hour. The Diver’s Punch ($9), a bold concoction of gin, tequila, muddled fruit and fresh lime, is a party in a glass, but is surprisingly more subtle than sweet. And with its dry cured olive garnish, the salty, aggressive signature martini is your best bet with oysters. Finally, a balanced, focused wine list—featuring an “Interesting Whites” section—and two Boulder Beer offerings, brewed specifically for Blue Island, round out the focused program.

Unsurprisingly, however, oysters are the main show at Blue Island—and Blue Island Oyster Company’s farmed and wild-caught options are the backbone of the menu. The signature Blue Island No. 9—a farmed Virginica variety that balances strong salinity with a smooth, buttery finish—will be a staple, and is also featured on the happy hour menu for $2. Naked Cowboys, a wild oyster diver-harvested in Long Island Sound, are noticeably briny and meaty. And while upfront east coast varieties are the star, the menu features a rotating selection of high-quality specimens (priced daily) from around the world for those that prefer smooth, buttery oysters.

With an approachable menu that aims to highlight a variety of oysters—some of which are farmed or wild-caught in Long Island’s Great South Bay by Quartuccio’s team—and New England comfort food classics, Blue Island Oyster Bar is an appropriate homage to the generations of divers and dockhands who have long foraged for the perfect oyster. Despite being 2,000 miles from the nearest harbor.

[UPDATE: September 22, 2015 at 1:57 p.m.: The article was updated to correct the origin of Naked Cowboy oysters. The oysters are harvested in Long Island Sound not the Great South Bay].