What:  A look at Mockery Brewing and its tea infused beers

Con: The street it is located on is under going construction so avoid rush hour when planning a visit.

As a brew master with 10 years of experience in the craft brewing industry, Zach Rabun, the creator of Mockery Brewing, has spent enough time in the brewing world to know how to construct beer flavor like a master. With a rising saturation of beer standards in the micro-brewing market, crafting new styles of brew is becoming one of the only ways to stand out. Mockery Brewing is not only pushing the boundaries on flavors found in beers such as the pale ale, IPA, stout, Belgian, or German style beer, it is branching into a new world of flavor. Tea infused beers have become one of its specialties, and yeah, they are delicious. Read on to learn more about how Mockery Brewing is busting down the status quo of flavor, and creating new standards for what people will be thinking of in the future of delicious craft micro-brews. 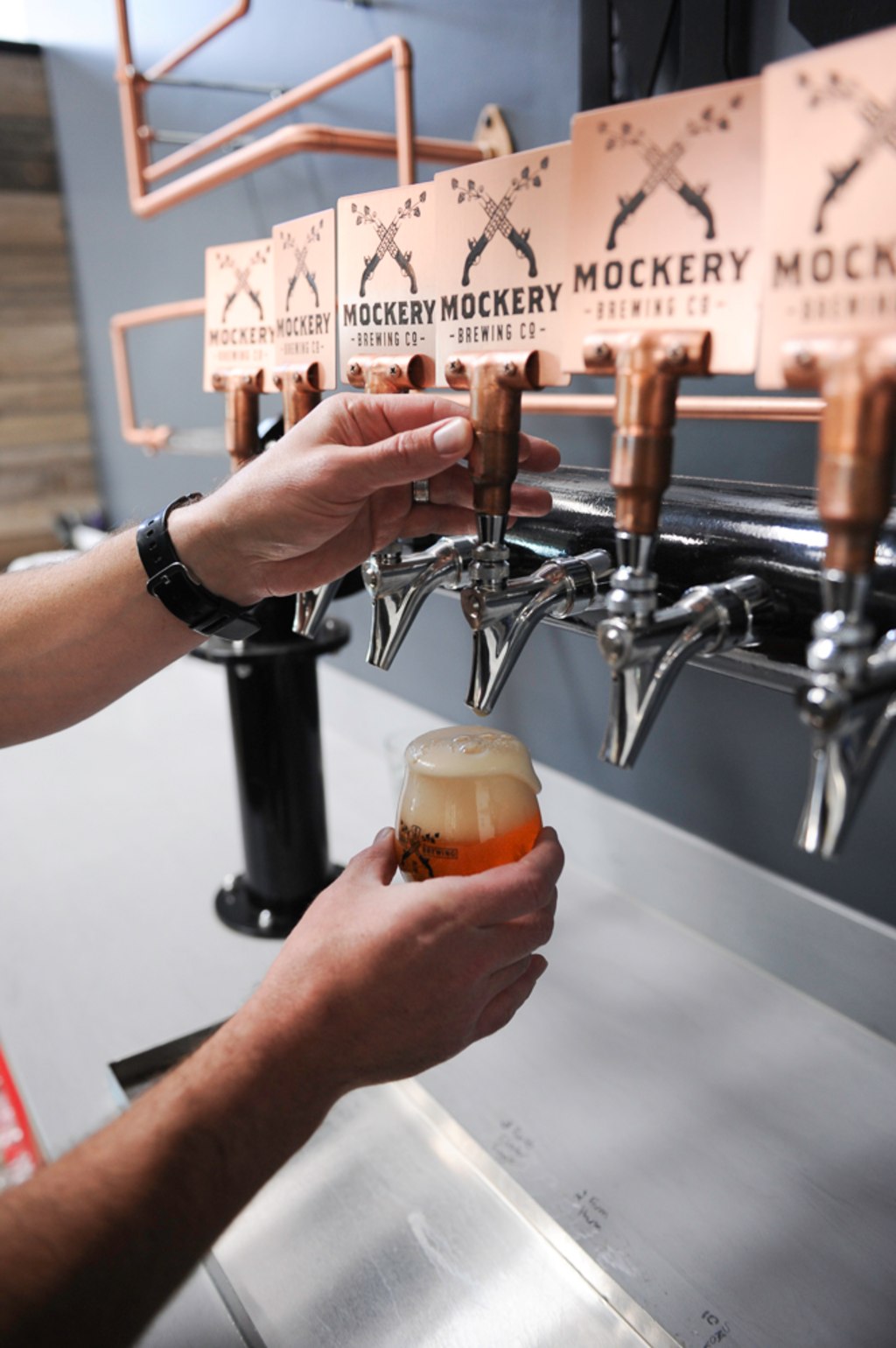 Rabun’s first step into the world of beer happened at the Coors Brewing Company. Behind the wheel of a forklift, he could see that most of the brewing was being done with the formula of a computer. He was not excited. Believing in the power of human touch to the flavors of brewing, Rabun left the forklift behind at Coors Brewing Company, and began working at Elk Mountain Brewery. Quickly working his way to the top of Elk Mountain Brewery, Rabun began looking to further expand his brewing literacy. Heading to the Siebel Institute, a school in Chicago to get a degree in Brewing, Rabun refined his technique, and learned more about the industry from the pros.

Alongside Rabun works his head brewer, Justin Burnsed. Graduating with a degree in Brewing from UC Davis in California, Burnsed has experience brewing for the famous Stone Brewing company in Sand Diego, and Brew Dog in Scotland (a brewery is known for having some of the highest ABV beers). He then helped start Prospectors Brewing in Mariposa California, before joining the team at Mockery Brewing. 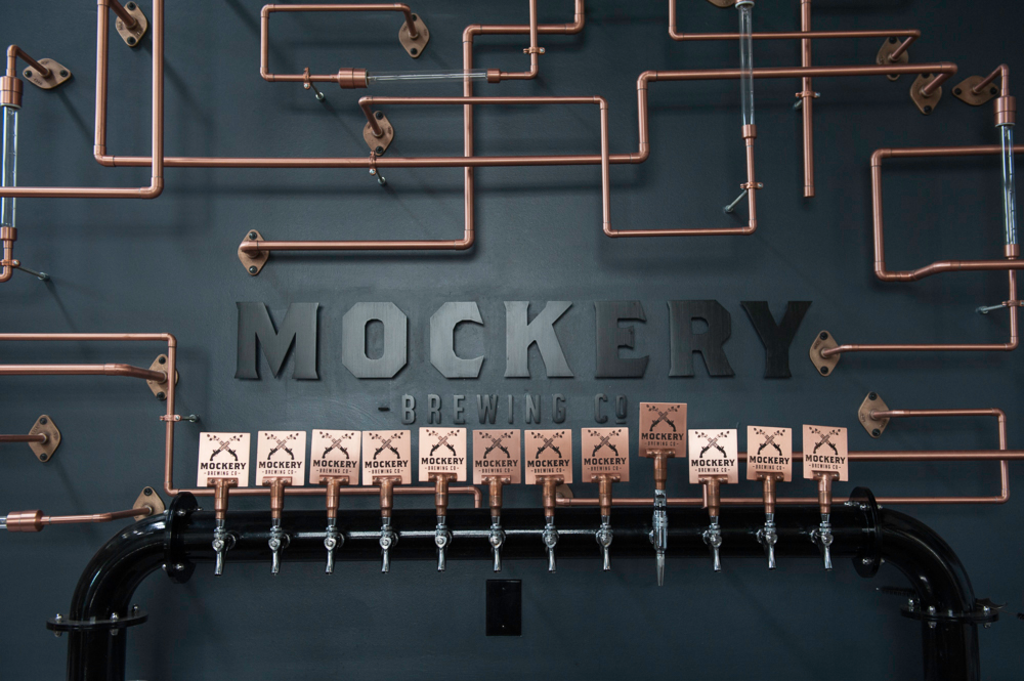 The inside of Mockery Brewing embraces its industrial location and brewing style perfectly. Shiny new metallic surfaces have an industrial style that reflects the road construction crews driving past the back door. This motif is reflected again above the taps in an art installment of copper piping. The piece is an intricately designed maze of pipes and lights that flow around the Mockery Brewing name and logo. Similar versions of the intricately connected brass pipe art have been put up throughout the bar area, along the walls and in the bathroom. Shining stainless steel brewing kettles dominate the back area of Mockery Brewing, as a testament to the freshness of each beer.

Outside there are picnic tables in a patio area that are lit by a canopy string of lights. On the drinker friendly side of things, there is also a game room in a separate building where people can enjoy the feeling of being productive while drinking.

“We don’t want any of our flavors to be small. If we say that a beer has jasmine tea in it, we don’t want our customers spending time trying to find the jasmine tea flavors in their beer.”-  Zach Rabun, owner of Mockery Brewing 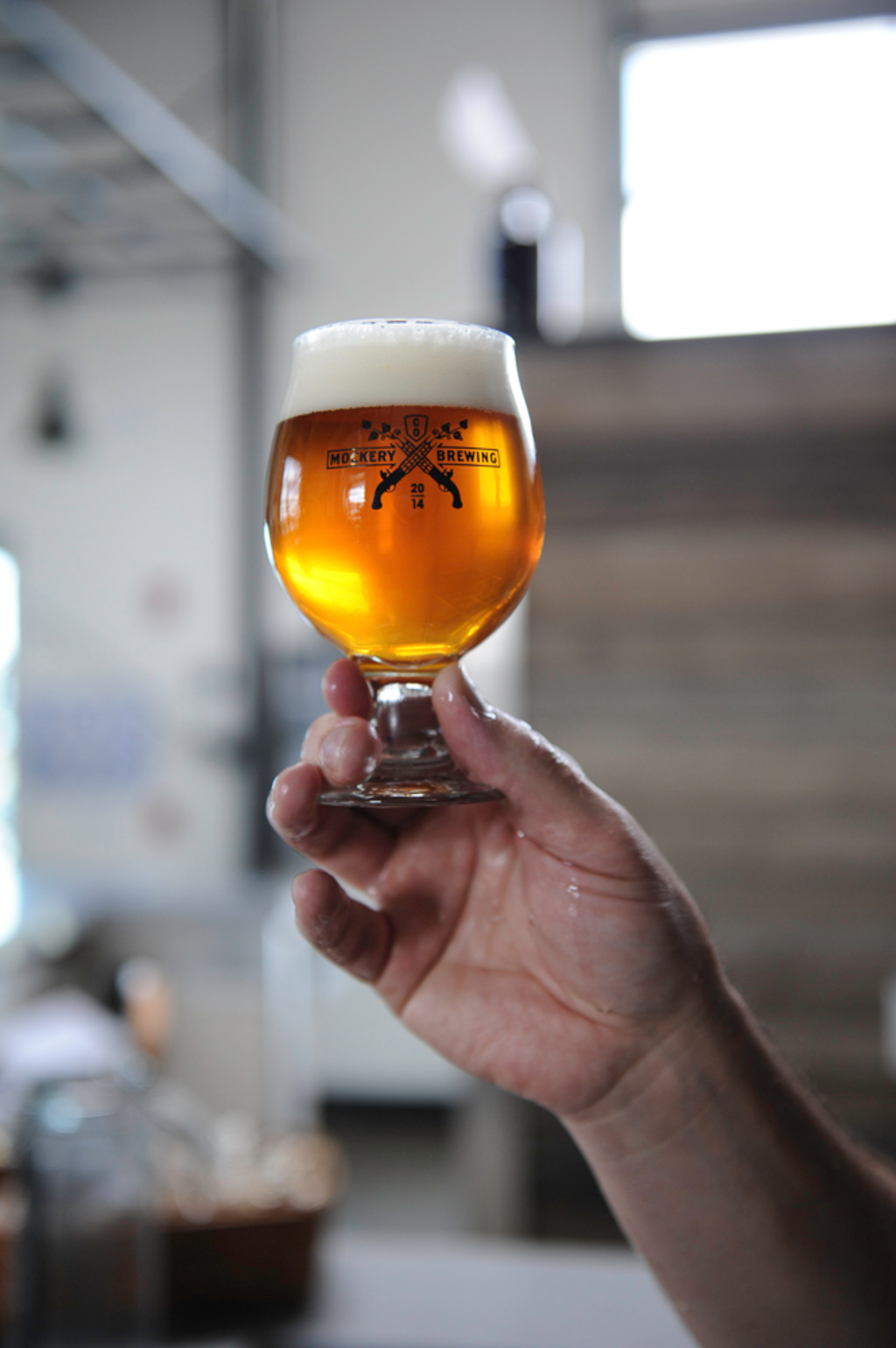 Farmhouse ale, with Rooibos Tea (6.2 percent ABV): Probably the only beer in Denver that uses a dark red, African bush tea (rooibos). The woody flavors of the red tea were subtle, but added a nice additional taste to the yeast and grain flavors of a farmhouse ale.

Smoked lager, with Lapsang Souchong pine smoked tea (6 percent ABV): There is no better beer to pair with a barbecue dinner. This smoked lager possessed an intoxicating smoky flavor that was screaming for a rack of ribs to wash down. The smoky flavor from this beer is immediately noticeable in the nose, and is the strongest flavor from the body, while maintaining the light, sweet, caramel flavor of a lager. 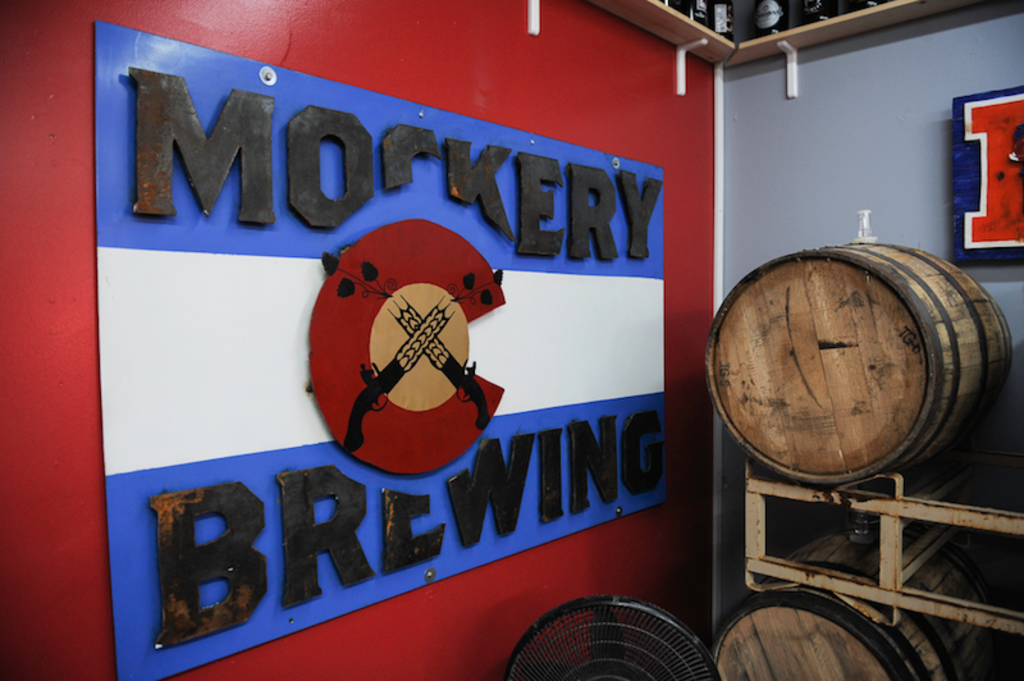 In addition to Mockery’s tea infused beers, Mockery offers an array of unique brews that add something more to their pedigree. A stout, IPA, or pale ale doesn’t simply contain the usual, expected flavors, but has something unique that sets them apart from other beers in the same category.

Oaked Southern Hemisphere Black Pale Ale (6 percent ABV): Brewed using ingredients exclusively from the southern hemisphere, this is one of the most interesting beers I have ever tried. The “black” of this pale ale stands out with flavors close to a stout, dark and fruity with a hint of oak from the chips used in brewing. The beer still had the light flavors of a pale ale, with a creamy finish.

RyeNo Cluster Fuggle (5.9 percent ABV): The collaboration beer of each brewery in the RiNo area for Collaboration Fest 2015. The collab consisted of: Mockery Brewing, Our Mutual Friend, Beryl’s Beer Co., River North Brewing, Epic Brewing and Zephyr Brewing. With this many brilliant minds behind a brew, how could you go wrong? The beer came out red in color, and tasted strongly of rye grains. A hint of sweetness from the Belgian yeast, topped off by a smattering of fuggle hops, creates a cluster fuggle of delicious flavors.

Imperial Coffee Stout (9.2 percent ABV): Crafted from a collaboration with Huckleberry Roasters, the strongest flavors of this beer are coffee, hints of chocolate, and the sweet fruity flavors of dark malt grains. Not much to the nose, other than the slight hint of coffee. The beer even leaves the drinker feeling a little coffee buzz.

Double IPA (8.5 percent ABV): Mockery’s take on an East Coast IPA, meaning that it has the flavors of a creamy caramel stand out more strongly, than its dry bodied, citrus explosion, west coast counterpart.

Dry Hopped Dubbel (8.5 percent ABV): A dry version of a Belgian dubbel, but with a delicious hop filled twist. Still had a lot of the bready flavors that one expects from a Belgian, but was lacking in the candy flavor department.

Red Session Ale (5 percent ABV): Full of citrus hop flavors, and a rich grainy caramel body, this beer has all of the flavor that one looks for in a red ale, but with less alcohol, making this a great beer for day drinking in the summer time.