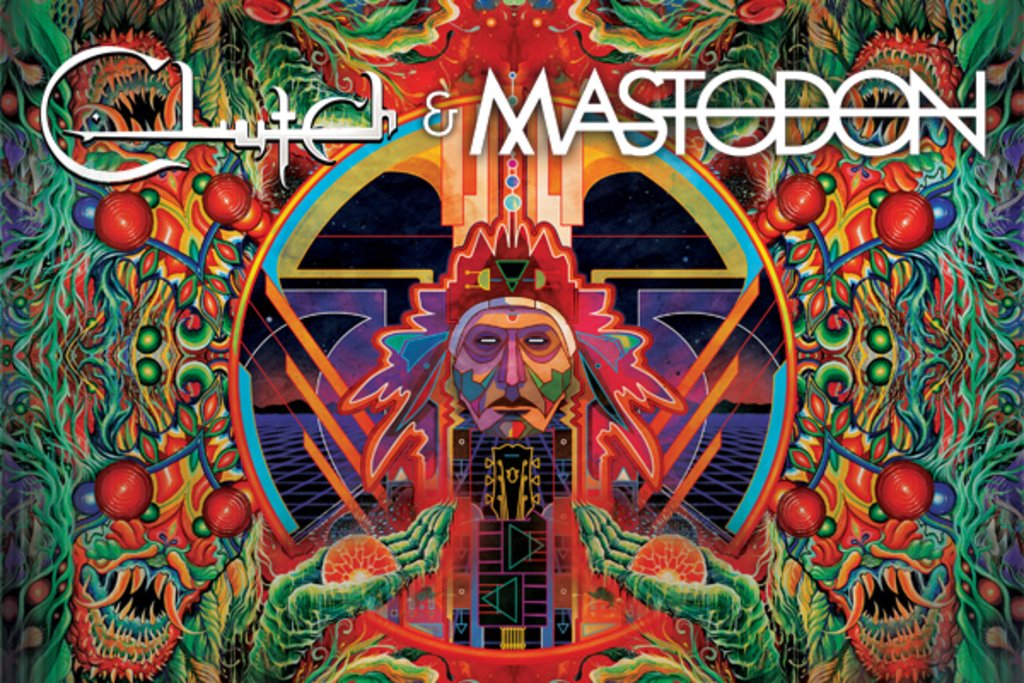 The Red Rocks summer concert season kicked off with a bang on May 3 as rock heavyweights Clutch and Mastodon rolled through on the co-headlining “Missing Link” tour and carved new crevices into the mountain with their earthy, organic riffs and canyon-wide grooves. Red Rocks was the perfect setting for these two larger-than-life bands, and the mammoth stage presence of each rivaled the majesty of the sandstone sheers that adorn each side of Colorado’s most beloved open air venue and made for an evening that attendees would not soon forget. 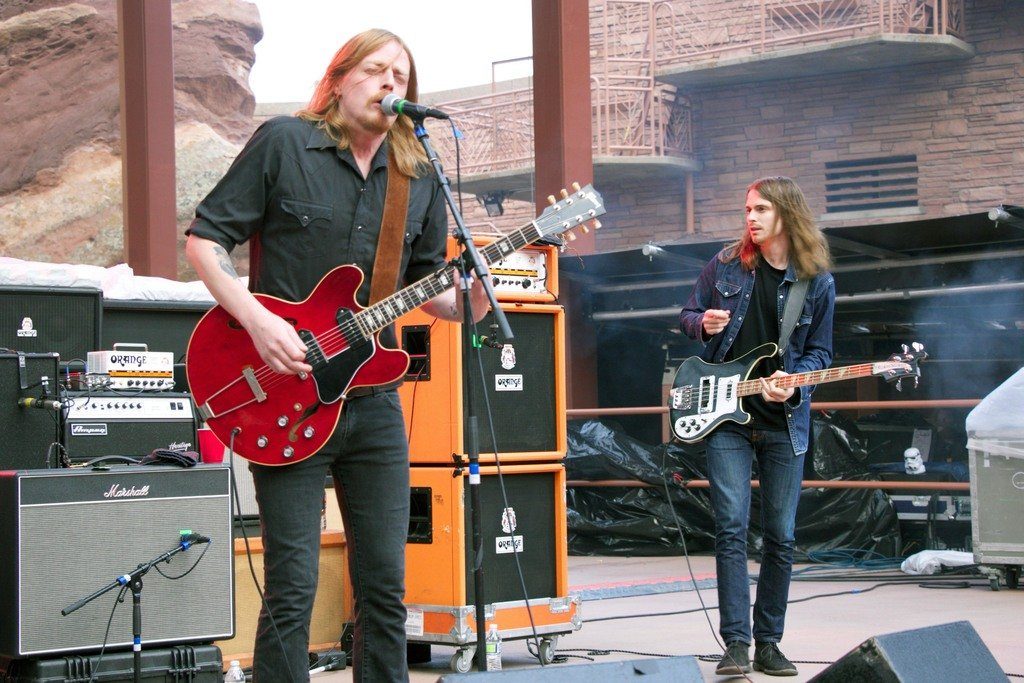 Graveyard performs live at Red Rocks Amphitheatre on May 3.

Swedish blues rockers Graveyard served as openers on this leg of the tour, and their bluesy croons coupled with their classic rock charm were a perfect fit for this tour. Graveyard vocalist/guitarist Joakim Nilsson came out by his lonesome, just him and his guitar, to open their set with a bluesy solo song before being joined by the rest of the band to rip through a nine song set featuring cuts from their two most recent albums, Lights Out and Hisingen Blues. They also played a new song called “The Shove,” set to appear on their new album due out later this year. The gentlemen of Graveyard are rockers through and through, and it showed in every part of their tight and soulful performance. 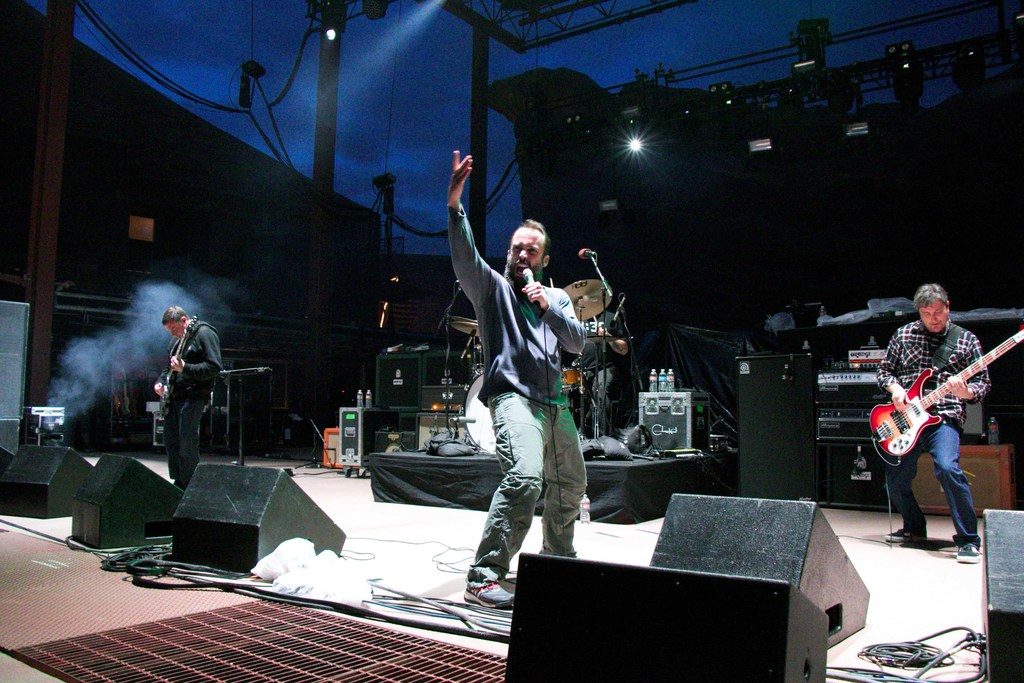 Clutch performs live at Red Rocks Amphitheatre on May 3.

Following Graveyard, the audience cheered when the seasoned veterans of Clutch came on stage, making it apparent that many were here to see them (myself included). Frontman Neil Fallon surveyed the packed amphitheater and drummer JP Gaster gave the audience an “Are you ready?” look as the band prepared to completely floor everyone in attendance with their career-spanning set, which opened with the fan-favorite “The Mob Goes Wild.” And indeed, wild the mob went. As they continued into “Profits of Doom” and “Earth Rocker,” there wasn’t a body between those rocks that wasn’t moving and/or smiling, and it remained as such for their entire performance. 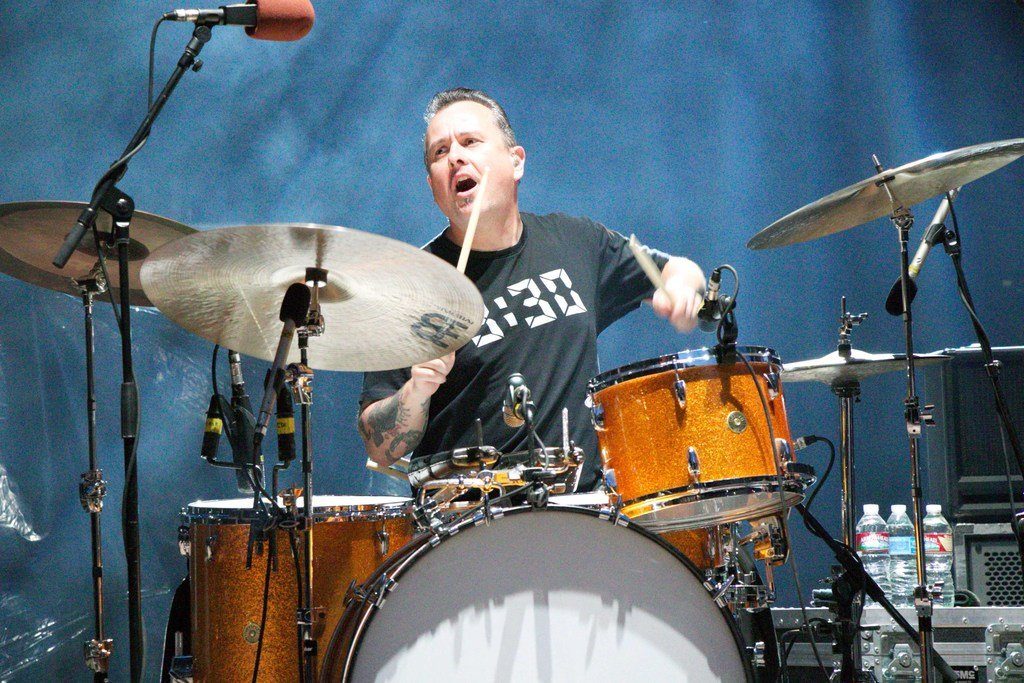 JP Gaster of Clutch performs live at Red Rocks Amphitheatre on May 3.

Clutch are known for changing their setlist up every night, and I have to say, the set they chose for this night was absolutely perfect. “Pure Rock Fury,” “Texan Book of the Dead,” “Cypress Grove,” and “The Regulator” were just a few of the highlights, and they had a few surprises in store as well. They performed two killer new songs from their forthcoming new album Psychic Warfare and invited Mastodon’s Brent Hinds onstageduring “D.C. Sound Attack” for some impressive slide guitar playing. 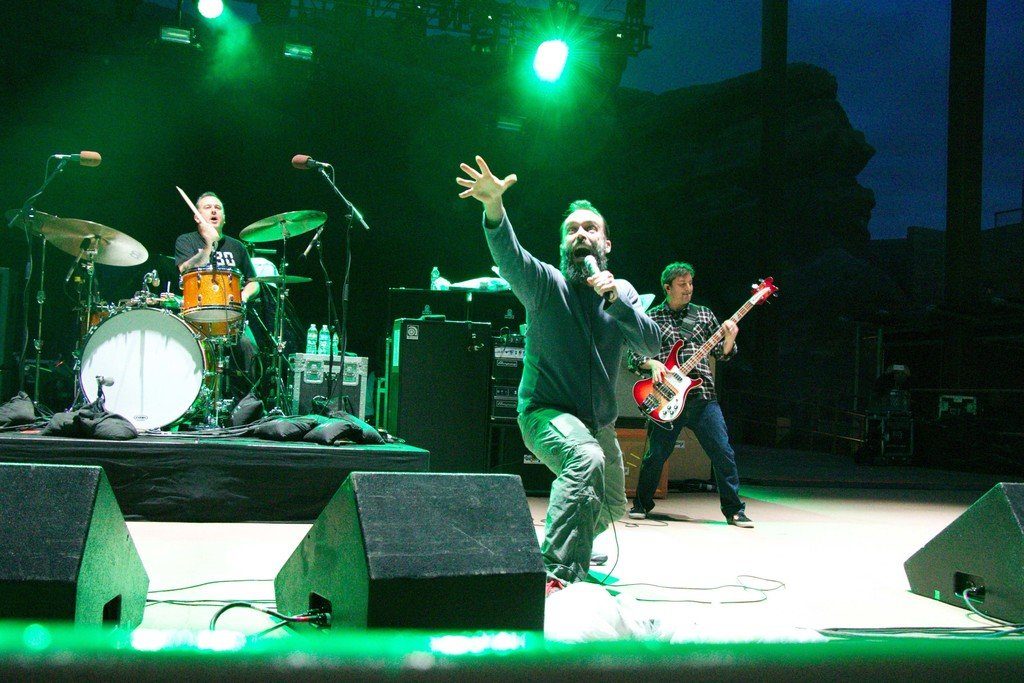 Clutch performs live at Red Rocks Amphitheatre on May 3.

Clutch have developed a cult-like following in their 25 years as a band, and though they remain one of rock’s best kept secrets, they’re hands down one of the best live acts on the planet. Neil Fallon is as eccentric a frontman as they come and consistently keeps the crowd engaged, and each member of the band are masters of their respective instruments. Guitarist Tim Sult is a riff machine whose playing is as smooth and clean as a waxed Mustang, bassist Dan Maines slaps his bass like nobody’s business, and don’t even get me started on JP Gaster. JP is easily the best live drummer I’ve ever seen, and his performance on this particular night was flawless. It’s unbelievably fun to watch him move around his kit with his tasteful playing and hard-hitting fills, and his sense of groove is second to none. He’s a master of keeping the groove in the pocket, which in his case, are as deep and wide as the Grand Canyon.

Clutch put on a remarkably tight performance, and they closed their set with “Electric Worry/One Eye Dollar,” whose backbeat shuffle and iconic, John Lee Hooker-inspired “Bang! Bang! Bang! Bang! Vamanos! Vamanos!” chorus have become a staple of Clutch’s live set. I’m sure everybody would’ve been satisfied had the evening ended there, but luckily, this memorable night of rock n’ roll wasn’t over yet, as Mastodon were up next. 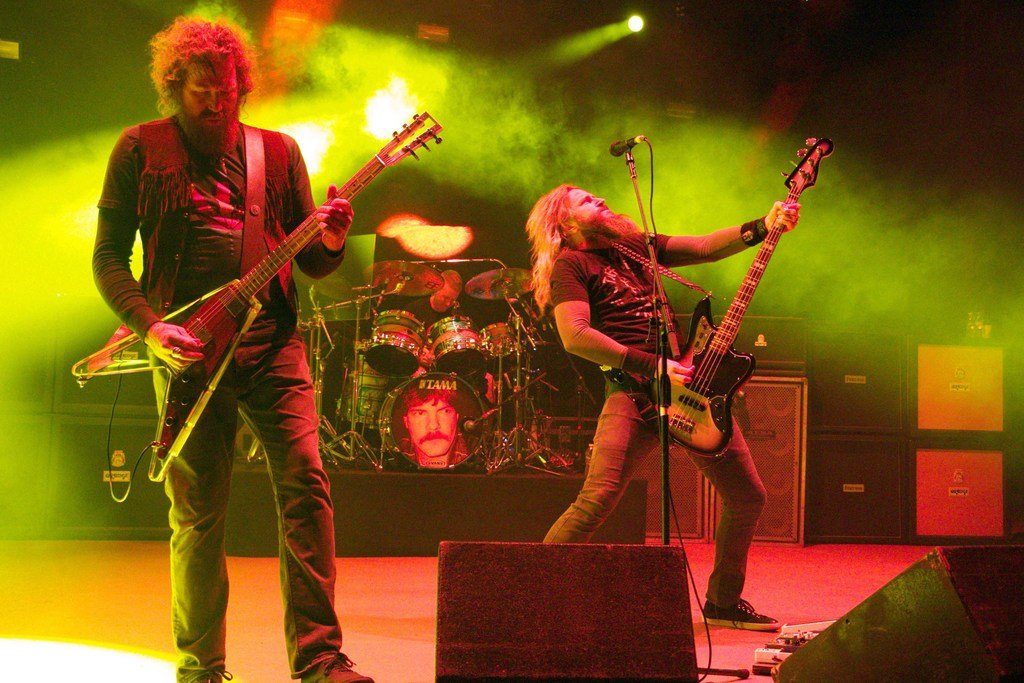 Mastodon performs live at Red Rocks Amphitheatre on May 3.

Still thick in the success from last year’s Once More ‘Round the Sun, Mastodon came out on stage completely reinvigorated and with guns (and guitars) blazing. As the soft guitar strumming that opens “Tread Lightly” began to play, the audience braced themselves for the metal onslaught that was coming. Not only was Mastodon more energetic and excited than I’ve ever seen them before, they sounded absolutely fantastic. There are those who have been very vocal about denouncing the new direction Mastodon have gone in for their past two records, but judging by their performance, it became clear that this new direction is exactly the kind of music Mastodon want to play, and it translated seamlessly to the stage at Red Rocks. 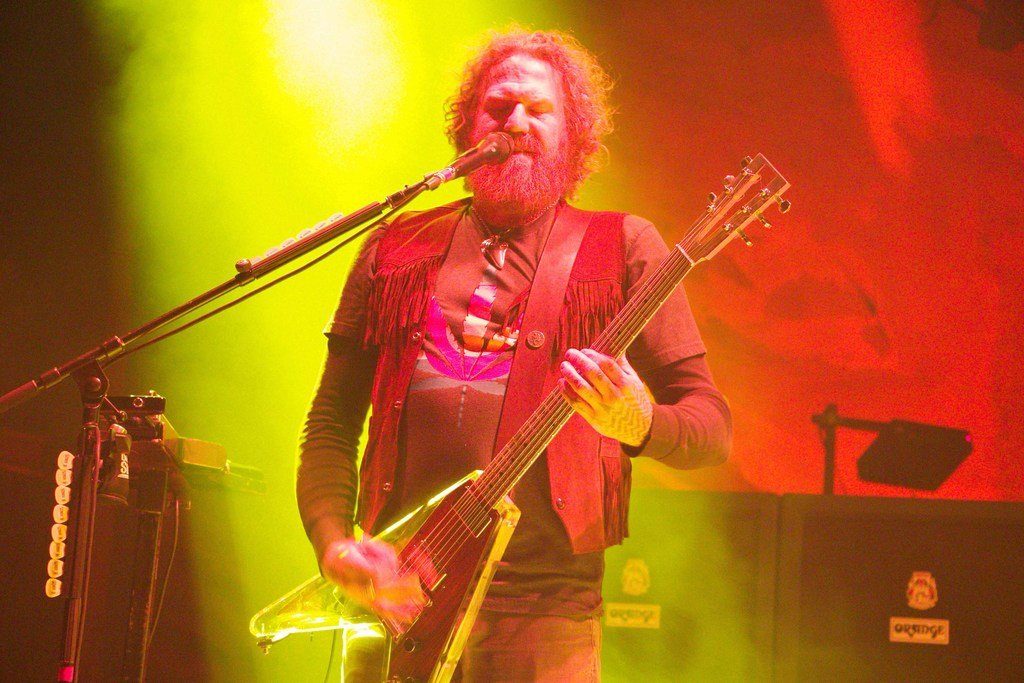 Brent Hinds of Mastodon performs live at Red Rocks Amphitheatre on May 3.

The dynamic duo of guitarists Brent Hinds and Bill Kelliher are a couple modern metal’s greatest guitar gods, and they defended this title successfully as they danced up and down their fretboards and churned out some of metal’s most memorable and psychedelic riffs. Hinds unleashed his inner Van Halen as he shredded a short solo which led into “Aqua Dementia,” a new trick in Mastodon’s repertoire which only furthered their cause for being one of rock’s biggest bands. They played a well-balanced setlist, much of it comprised of newer material but interspersed with old favorites such as “Bladecatcher” and “Megalodon” for good measure. 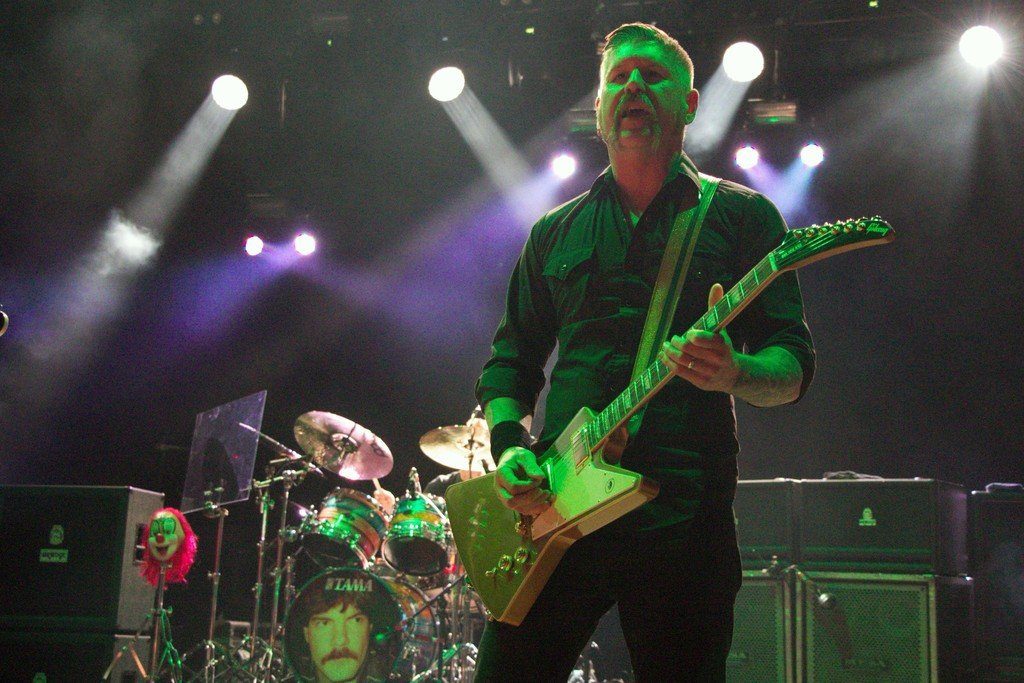 Bill Kelliher of Mastodon performs live at Red Rocks Amphitheatre on May 3.

The most epic moment of the night came at the end of Mastodon’s set, when they performed the four-part suite “The Czar” off of 2009’s  Crack the Skye. This ambitious song showcases Mastodon at their proggiest and most introspective, and was a perfect cap to their awesome set. However, for their encore, they outdid themselves when they broke into the fiery riffs and rolling drum fills of “Blood and Thunder” and invited none other than Clutch’s Neil Fallon out to reprise his role of Ahab, fulfilling a fantasy dreamt of by many a metalheads and ending the evening on the highest note possible.

All Words and Photos by Aaron Lambert.