Denver Fashion weekend is almost upon us and we couldn’t be more excited. Today, we’re taking a moment to chat with one of the fabulous returning hosts for this year’s event, the FOX31 “Everyday” show’s Chris Parente. Chris will take the stage on Night Two of DFW, taking place on Thursday, April 30. You won’t want to miss the street wear and lifestyle brands hitting the runway that night, along with the charm and humor of Denver’s own, Chris Parente.

Read on to see what Chris is excited about at this year’s DFW, some background info on our local (and national) broadcast celeb, and a bit of advice for those of you looking to make your mark on the world stage.

How did you begin your career in broadcast journalism?

I got my start reporting on the War … between the North and the South. Yeah, I’m that old. Thank God for Botox and Tiger’s Blood. Joking aside, it’s been 20 years and a wild ride. My first job was actually in a town just slightly smaller than your garage. Lafayette, Indiana wasn’t glamorous but it was a great way to learn the ropes. I often advise young journalists to start small, where you can actually report, anchor and produce. If your first job is in New York City, you’ll likely be answering phones.

How can you compare Denver to other cities that you have lived in in the past?

I’m not eligible for one of those “Native” bumper stickers but Colorado sure feels like home. I moved to Denver 10 years ago, and in my humble opinion, it’s one of the coolest places to hang your hat. The arts, fashion and music scene is thriving and unique. We enjoy all the perks of the “big city,” without many of the disadvantages. L.A. is great but good luck getting a glass of water! 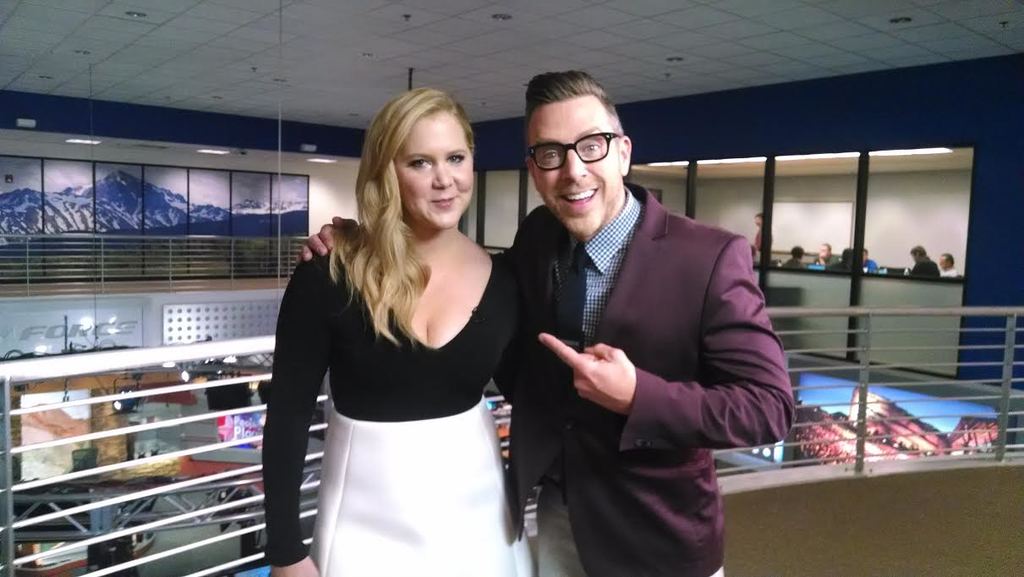 Can you describe one of your favorite celebrity interviews?

I’m always looking for one more reason to have a “nerd” sign taped to my back. But I won’t apologize for being star struck by Harrison Ford. A chance to sit down with Han Solo (note: do NOT call him that) was a real thrill. I was also mesmerized by the legendary Robin Williams (he has no “off” button). Cher, Elton John, Melissa McCarthy, Johnny Depp … almost all the celebrities I’ve interviewed are pretty cool peeps in real life. I’d have to say “Kermit The Frog” was among the most memorable. I might have teared up a little at the chance to actually have a conversation with my childhood hero (go ahead, tape the “nerd” sign to my back)!

You are very well versed in interviewing and bringing a great energy to the camera. Can you give hopeful journalists some insight into the daunting interview process?

The most important piece of advice is also the most clichéd: simply be yourself. There are a million people out there trying for the same job but none of them are you. Rather than attempting to mimic what you think a “good reporter” would do, be comfortable in your own skin, approach each story being true to your style and essence. My co-host on television, the divine Kathie J. (also of KS107.5 Morning show) is a prime example of being true to yourself.  I’ve never worked with a more engaging, funny, off-the-wall and talented woman. And there’s no “secret” to her success, she’s just being who she is. She did also try to sleep her way to the top, but the way she has sex, that might have actually hurt her career. Yes, I’m kidding.

How do you think people relate to you personally when you are on camera?

For better or worse, what you see is what you get.  I can’t stand the “Ken And Barbies” of television (despite the fact that, yes, I did play with Barbie as a child). There is so much fake crap on television. People pretending to be younger, smarter and more “perfect” than they actually are. I’ve got plenty of faults (just ask my partner) and you’ll see ‘em on display, along with what I hope are my strong points. I have found that the more I embrace total honesty, the more people can relate. I’m also a big fan of humor. I try to approach almost every story I do with some degree of levity or “fun.” There’s enough crap in this world, I think we should try and embrace joy and laughter every chance we get. 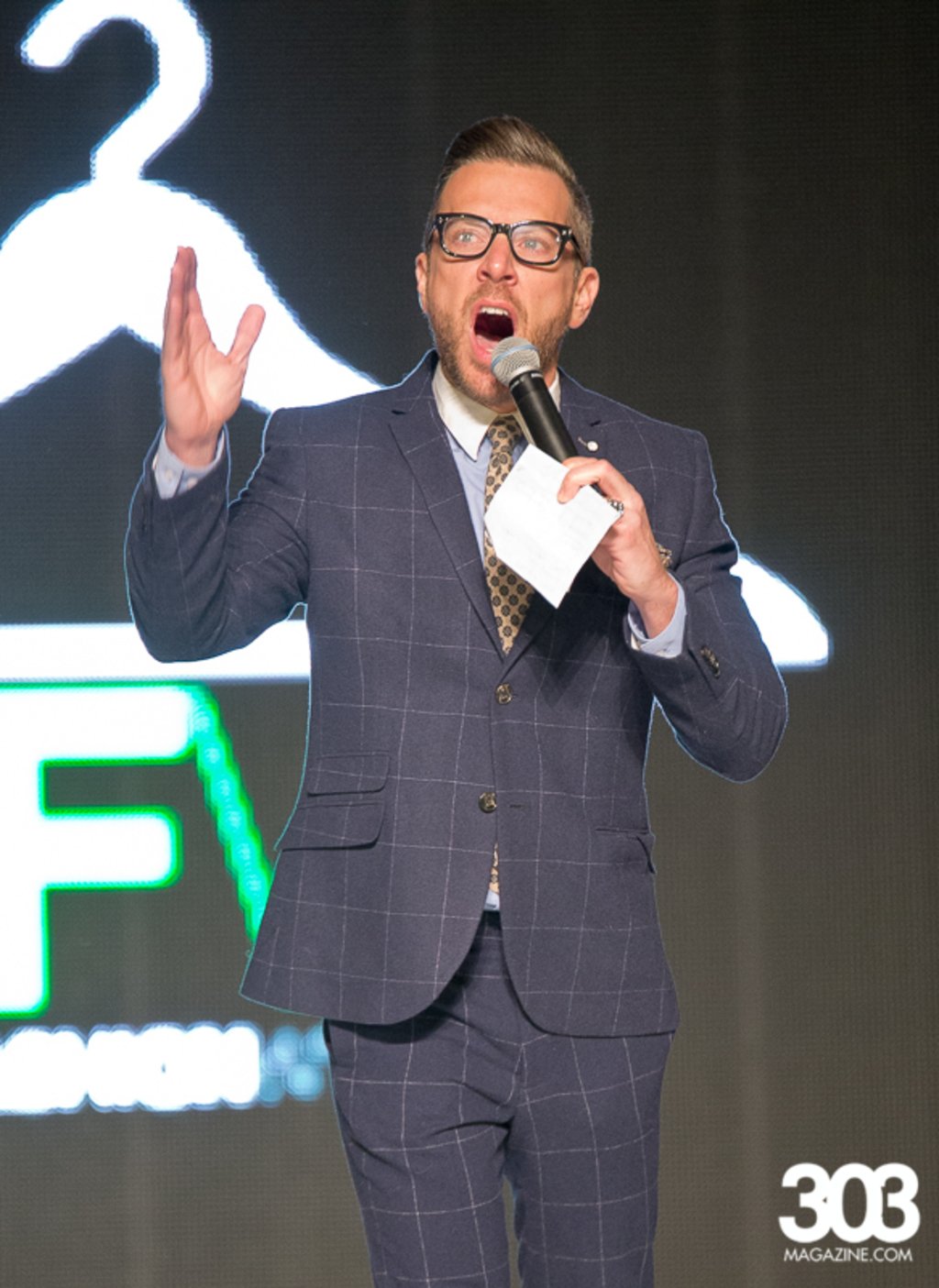 You’ve hosted DFW before. Why did you want to be a part of it again?

For me, DFW is *the* cornerstone of fashion in Colorado. The energy, the presentation and the talent … it’s truly unique and it’s exciting. We’ve got incredible designers (both hair and clothing) and there’s no better showcase for their talents. Plus, I like the drinks.

Are you excited to be able to present at this years show?

I’m always excited to be a part of the show.  At my age, I’m also thrilled that Mondo Guerra is working on a line of designer “Depends.”

What do you hope to gain from this experience?

I hope to be inspired and to get some new ideas for my own wardrobe. It’s great to see so many looks on the runway and to then adapt those looks to my own life. And by adapt, I mean expand the waistline.

What designer or aspect of the show are you most excited for?

I’m guessing I’m not the only one pumped for Scotch & Soda.  It’s a real score to have their first runway presentation in Colorado. We featured several of their looks on my daytime talk show, “Everyday” (weekdays at 10 a.m. on Fox) and I’m already in love with the patterns, the fabrics (and maybe a few of the models).

What advice do you have for Denver’s young fashion and style lovers hoping to make their mark on the world as you have?

The world needs more artists, more poets, more inventors, more visionaries. Odds are, you’ll be mocked or degraded or dismissed. Haters gonna hate. Simply listen to your Heart Song … and FOLLOW IT. You will never regret following your heart.