When: Glazed & Confuzed will serve at Denver Fashion Weekend on Sunday, November 16

Cons: As some Yelpers have pointed out, the price point is a little higher than some donut shops. But patrons should consider that the ingredients going into the donuts are of a much higher quality.

It seems that Denver has experienced something of a donut renaissance. Perhaps one of the most iconic American foods there is, the donut has certainly been on the up and up, with Voodoo Donuts and Dunkin’ Donuts joining the ranks of Denver’s already established shops.  Glazed & Confuzed is the newest donut shop in town, but the fledgling company has already planted firm roots in the Denver community.With organic and local ingredients and creative flavors, Glazed & Confuzed is redefining the donut.

Glazed & Confuzed got its start when co-owner Josh Schwab, formerly a chef, began experimenting with making donuts at home on a whim. When neighbors and friends started demanding them, he realized that he was onto something. He set up a booth at the farmer’s market and sold out of his donuts in just two hours. After months of successful farmer’s market appearances, Schwab began to partner with local coffee shops, including Jake’s Brew Bar and Corvus Coffee, among others. Schwab spent some time working with The Hole Donut (now closed), and began to consider opening up his own shop. The organic success of Schwab’s donuts finally snowballed into the brick-and-mortar joint he and co-founder Ben Hafdahl opened up in Glendale last July. The response has been good.

“If it’s not organic, then it’s local” Like many donut joints, the shop offers some core flavor options, as well as many seasonal and rotating choices. The atmosphere is classic donut shop—on a given snowy morning, you’ll find locals huddled over coffee and donuts, as well as those picking up donuts by the dozen for the office. But that’s about where the similarities between Glazed & Confuzed and your typical donut shop end. G & C does donuts a little differently than most.

For starters, just about everything (aside from one or two garnishes) is made from scratch on a daily basis. Then there’s the ingredients, which are miles above what you’ll find in a standard donut. Think organic eggs and sugar, high-quality unbleached flour, clean frying oil and local dairy. 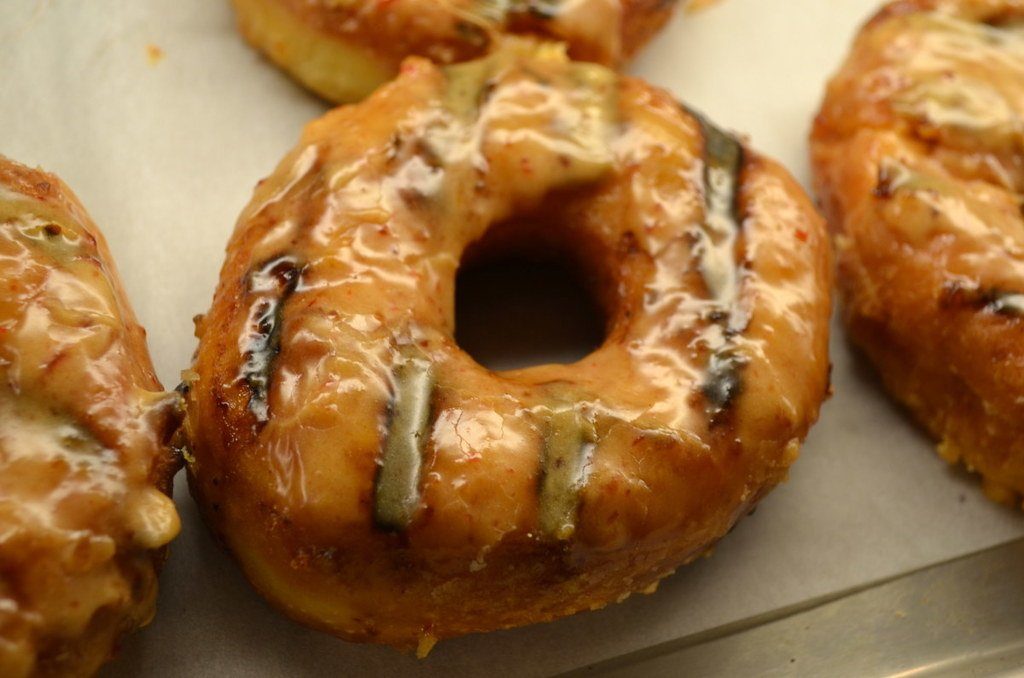 “If it’s not organic, then it’s local,” Schwab explained. The commitment to high-quality ingredients means that G & C strives to include as many local products as possible, and Schwab’s tenure at the farmer’s market has given him plenty of connections for local partnerships. The donuts often spotlight ingredients like locally made jam or goat cheese. The quality of the ingredients means a healthier, more sustainable product free of preservatives and other junk. The resulting donut might not be exactly virtuous, but it is certainly better for you than many others out there. The fact that they taste so great doesn’t hurt either. Just one glance in the case and you can tell that Schwab and Hafdahl have fun experimenting with new flavors and combinations.

When you visit, you’ll find creative flavors in the case like root beer float, hot apple cider, Samoa, and the Grilley D (yep, the Grilley D is indeed a lightly-grilled donut). One of the current menu favorites is the Pecan Pie donut, a classic yeast donut topped with a caramel-y glaze and crunchy candied pecans. But even the vanilla donuts aren’t, well, vanilla. The Signature Vanilla donut comes topped with a browned butter glaze flecked with bits of vanilla bean. These elevated takes on the American donut are surely worth the slightly higher prices.

As the company grows, they plan to expand beyond just donuts and offer a sandwich program featuring homemade breads. In the mean time, they’ll be busy with beer and dessert pairing events, like the Chef and Brew Festival. There are even rumors of a Great Divide Porter in the works featuring a signature Glazed & Confuzed vanilla donut . Glazed & Confuzed has made a point to emphasize the local community, and the partnerships, as well as the new customers, just keep rolling in. If you haven’t had a chance to try Glazed & Confuzed yet, make sure to check out Sunday night of Denver Fashion Weekend, where you’ll be able to sample the goods.