The last time we checked in with Jason Coates of Join Us Around the World, the travel aficionado was working to raise money for a trip to Haiti that would ensure clean water filters for local villages. The crew raised $4690 via Indiegogo and the trip has been completed. The goal, Coates says, is to showcase parts of Haiti you don’t see on television and to highlight the countries beauty and culture. What Coates returned with is a renewed commitment to documenting the Haitian lifestyle and to continue providing clean water filters around the world.

Spending more than a week in Haitian villages riding on “taps taps” (buses that transport from 3-20 people in one truck), to experiencing the Haitian way of life with food and work, Coates was enthralled with the energy of the country. He, along with Derek Reindhardt and Pat Flanigan installed a total of five clean water filters that also included entirely new water systems for the villages. Two of the filters went to two different orphanages, two schools received new water filters and the fifth, the guys secured with a family who would act as the water source for a large village.

“We went and rebuilt their entire piping system because there were breaks in them and water was going everywhere or they were sealed off with T-shirts and plastic bags. We couldn’t go there install filters and leave their systems like that so we found the closest thing to a hardware store and bought the needed supplies to do the jobs,” Coates explains. 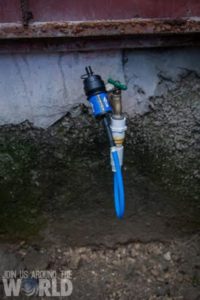 After this moving trip to Haiti, however, Coates says he is more vested in utilizing the humanitarian component. The documentary on the fresh water project in Haiti will be released in early November and the, Coates and his team is off to the Philippines, with a long-term view of bringing water filters to Haiti.

You can watch the trailer below and check back with joinusaroundtheworld.com for more information on the documentary’s release and to learn how to be involved with the movement to bring clean water around the world.