To celebrate 303 Magazine‘s 10-year anniversary this year, we’re hosting The White Party on August 28 at The Breakers Resort. There will be a fashion show with a catwalk on the water, South American appetizers and cocktails, live music from DJ Tatiana and more.

But for the anniversary celebration, we didn’t want just any production – we wanted to go all out. For the first time ever, 303 is working with one of the nation’s largest and most prominent production companies, Rythm EFX. This company has worked at some of the biggest music events and has built stages for some of the world’s most popular musicians including Skrillex and Lil’ Jon.

We’re proud to announce that Rythm EFX will be producing The White Party with visuals, lighting and a stage that will make for an event to remember. To prepare for what everyone is about to experience, 303 spoke with Rythm EFX’s Event Coordinator, Kayzha Shepard.

Get your TICKETS to The White Party now before they sell out!

How did Rythm EFX get its start?

We started in 2009 as a very small special effects company and quickly grew after purchasing all of the lighting and video equipment for the Pretty Lights Tour in 2010. We started doing production in Denver’s concert scene in the fall of 2010 and have been quickly growing since. In July of 2013 we doubled our inventory of LED video wall and purchased over 200 more of our most popular Oracle HD-9mm Video Panels and expanded into and full prop shop for the custom props and expanded our Special Effects department. We have grown incredibly fast and it has been really great so far. 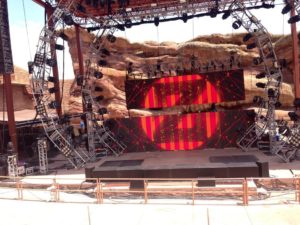 You’ve worked with some amazing artists including LMFAO, Skrillex, Gym Class Heroes and Lil’ Jon. What is the experience like of working with such popular artists?

We’ve had a lot of fun throughout the years. It’s not as glamorous as most would think. We usually don’t talk to the artists, just usually their tour managers, however it has been fun to work on the production of some great music. Each year we get to add some great new artists to the list. This year we worked with Krewella, which was cool, plus our crew enjoys their music, and they seemed like great girls so that has been one of our favorite shows this year so far.

Is it a challenge to offer a new set-up for each artist/client?

We can find it difficult at times but most the time we have great ideas built up just waiting for the right person or place. When designing a show or a stage, it is fun because we have so many new capabilities with lighting fixtures these days. Each year the industry comes out with something amazing that we can do great things with and our designers really take that and make great things with it. Our LED Video walls are very versatile and we can apply them to many designs. We have three types and it gives us a lot of different ideas.

We are the only company in Colorado that do what Hollywood can do. Zack has been making amazing sculptures for years but it has only been in the last few that he has taken that hobby and turned it into something custom for requesting clients. This past year we unveiled a 12’x10’x7’ Animatronic Dragon that was custom made for a touring artist. We really enjoy making things like this even though it was time consuming (the dragon took 5 months to complete) because they are so amazing in the end. We like challenges and making things nobody else does. 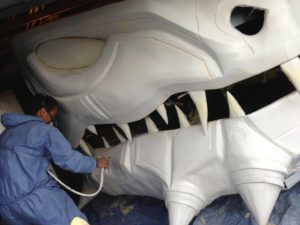 Any favorite projects you’ve worked on so far?

We have had a lot of cool projects throughout the years but I think by far the 5-month dragon project was the best. Zack worked solely on it for the first 3-4 months. He designed the armature with Greeley based monster makers, Distortions Inc. and then started welding, forming and sculpting from there. After the foam was laid it took 3 months to sculpt. Most all the sculpting was done with 6 different types of sanders and grinders. It was tedious and very time consuming and during that time he developed a bit of a love/hate relationship with the dragon. After the major sculpting done, we brought in a couple of our brave crew members that were willing to spend the long days in a full suit with a respirator covered in dust hand-sanding the dragon. We would joke how frustrating it would be spending 6-8 hours on a spot and it looking the same but it was worth it in the end and the angular shape of the head is spectacular.

The animatronic dragon was designed to open with continuous flow confetti in the mouth. It is equipped with six co2 jets inside and an additional two lasers in the eyes

How did it turn out?

Towards the very end of the project was the fun part-the painting and more painting. The dragon is so large that it took a long time to paint each coat and then a long time for each coat to dry. Then, Zack came through and did the final detail paint. The final and most challenging part was moving it. It was designed to move and it comes apart in 4 pieces but it was a huge challenge getting it in a truck. The largest piece took 4 strong guys to move and it was a struggle and we cleared the roof by only an inch! It was a great and fun project and I think everyone that put work into it really felt proud when it was finally done.

You’re behind the production of the upcoming White Party. Why did you want to take this project on?

We always seem to get back in into the concert scene. Which isn’t bad, and it’s what we’re used to but we enjoy a change of pace without the loud music and the crazy people and the super late nights every night. Our owner Zack, who is a professional theatrical and concert lighting designer, has done multiple fashion shows prior to owning RFX and wanted to be apart of the 303 fashion events. So here we are. He also always had the vision of a catwalk over the water so he had his chance with this event and so we will be putting together a beautiful lighting design for the models with the runway that goes out over the pool.

Will producing this fashion event be completely different than projects you’ve worked on before?

We have plenty of experience in this area of production, however the fashion show spectrum is fairly new. We work multiple banquets every year for local non-profits, international non-profits, religious & large nationally known companies. Our HD-9mm Video is very popular since it is so crisp, high resolution and bright or provide confetti and co2 jets for ceremonies. Tell us a little about the runway that will be on top of the water.

What is the process of building this?

Well this will be the first time our crew will have to go swimming to set up something, so that will be kind of fun! I think it will be a process and it will take a little longer than normal. We will have to build an underwater structure and then place the decks on top of the structure once built. There will be lighting on the decking so we will have to carefully run the cables and dress them so that they won’t be touched by the water before/during the event.

What aspects of the production can we look forward to at The White Party?

The catwalk over the water I think will be the most beautiful part of the production. With modeling, lighting is very important so we will be carefully placing theatrical type lighting around the pool to light the runway and the models. We also plan to bring in some color changing LED moving wash lights and LED Video Screen.