I’d Rather The Giver Just Give Me A Cupcake, But Since That’s Out Of The Question…

A first kiss, the first bike ride, the first time you ever had your heart broken, the first time you ever broke someone’s heart — precious moments, either good or bad, that make life, life; but what happens when those little yet important simplicities are taken away from us? 303 Magazine Film + TV staff attended the Denver premier of The Giver at the SIE Film Center, in order to explore the film’s portrayal of that very same question. 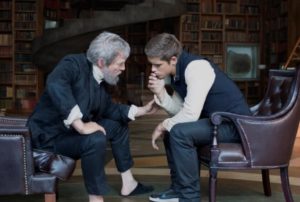 Director, Phillip Noyce, has a long list of dramas under his belt such as: The Bone Collector, Salt and Patriot Games. He can now add The Giver to the list, a film adapted from Lois Lowry’s acclaimed novel of the same name. The story tells of a perfect, utopian (communist) society where hate, love, jealousy and choice do not exist. Even color has been drained from their world, and since no one knows any differently, apparent peace reigns over their city. However, one of the reasons we teach people history is so we don’t end up repeating past mistakes, so for that very same reason their world has a Receiver of Memories, a person with a gift to give and receive memories passed down from former generations in order to provide wisdom to the council upon making important decisions. When Jonas is chosen for this daunting task on the day of his graduation, he does not know what awaits him until the first day of training with The Giver — who shows him a world of memories from life before regimental utopia, and all of the pain and pleasure that accompanies free-will. 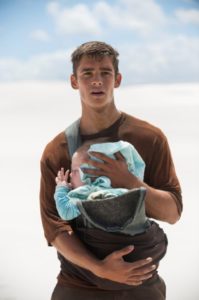 Jonas Seeking What Is Lost

This sci-fi drama blends together several ideas simply within its cinematography, contrasting the artistry of simplicity versus the artistry of chaos. Since, color has been drained from their world, about 3/4 of the film is in black and white. Color is an extremely important trait to our world — you can tell a lot about a person by the color of their room or their hair or their backpack. There is a whole practice of reading “auras” — color(s) that accompanies each individual, which people claim can help you see the true identity/spirit of the person at which you are looking. So, symbolically, color is absent from the world they live in, along with personality, emotions or true identity. Even in this black and white suburbia their is a crisp, cleanliness that can make us even see the benefits in a world of peace and sameness. However, when we catch glimpses of the chaotic remnants from the past that is given to Jonas, we see the beauty in that too — in a tiger, or a church, a riot or a party — and together (us and the characters), discover that those pesky feelings, emotions and decisions that make life hard, also make life worth fighting for — and that’s where the real story begins. 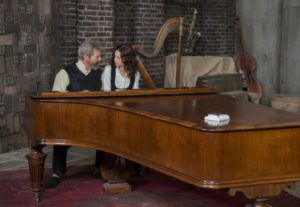 For the most part, the film chose wisely for their cast. Jonas is played by the charmingly adorable Brenton Thwaites, whom we know from our review of one of his previous film endeavors, Maleficent. Jeff Bridges plays the sarcastic, haunted yet extremely redeemable character of The Giver. Meryl Streep takes on the strict, enforcing reign of the Chief Elder… did she succeed? What do you think, she’s Meryl Streep, she could have played any character in this film (and then would have probably won an Oscar for every one of them). Finally, I was surprised, but pleased to see a face re-emerge who has lately been absent from the film industries — Katie Holmes. She plays the strict, legalistic, rule-book thumping mother of Jonas, and her husband is played by none other than the intense and magnetic actor that is Alexander Skarsgård (whom we know from our review of his indie film The East, as well as from interviews with his cast-mates from True Blood). Also to my surprise, the questionable choice of Taylor Swift was made to play the character of Rosemary, one of the former Receiver of Memories. It wasn’t that she did a bad job, she was actually pretty good, however it is my belief that when you take someone who is famous and known all over the world for being themselves and then put them in a movie where they have to convincingly play someone else, it brings you out of the story for a moment. Instead of seeing the character of Rosemary, all you think of is “Taylor Swift”. It brought on a slight abruption of the story for me, but maybe you will be able to seamlessly see past it.

Besides the comment about Taylor Swift, and the fact that we as the audience are not really shown how their society exactly came to be this way, not to mention the fact that the memories Jonas experiences when becoming the Receiver of Memories excludes many other important facts about life — this was an extremely artistic rendition of Lowry’s novel. Fans will find that it follows the book pretty closely in the beginning but starts to stray toward the last half. But, like most films that are made from acclaimed novels, I hope you are able to separate the two. The Giver is like the adult version of Divergent, it deals with the irony of a utopian society that is built and based on a foundation of lies. The film will make you think of all the little moments in life we take for granted, and what it would be like to live in a world void of all the things that make life, life. It all comes down to how we choose to live the life we are given, and it also all comes down to if you decide to go to the movie theater August 15th. I have given it my thoughts, criticisms, praises and also a stamp of approval, so think it over. Until then, get a visual of The Giver with this official trailer: