The Fault in Our Stars REVIEW

Sure, Blame the Stars…

What do we think of when we hear “cancer movies”? It’s probably something along the lines of… perseverance, moments of joy in the midst of tragedy… and predominantly, tears, tears, and more tears….And then we cry a lot. So this week, Film and TV staff at 303 Magazine attended the estrogen-filled Denver premier of The Fault in Our Stars, with a box of tissues, in order to let the audiences in on whether is was a movie worth watching or a tear-fest worth avoiding. 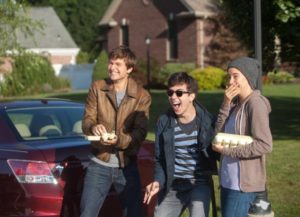 Augustus, Isaac and Hazel- up to no good

Adapted from John Green’s novel, The Fault in Our Stars had a following before the first movie trailer. Readers fell in love with the book that aimed to portray the simple, indelicate life of those who live with cancer, or those who are dying of cancer— the point is to show the audiences the difference. Director Josh Boone, known for his work dealing with the complexities of love, took charge of this acclaimed novel and made it cinematic. Hazel Grace Lancaster, played by Shailene Woodley, is a 17 year old cancer patient. For her, death is inevitable, and her goal in life is not to accept her imminent peril, for she has already done that, but to make sure that her charismatic, caring parents, played by Laura Dern and Sam Trammell, can accept it as well. To that end, she lives her life to please them. This involves being forced into going to a support group, and unexpectedly results in her meeting another caring character. Augustus Waters (Ansel Elgort), is the one who quickly and un-hesitantly falls in love with the girl who already settled with the cards that life had dealt her. This is the story of two young, sarcastic, light-hearted cancer patients that fall in love despite the supposed limitations of their “condition”. 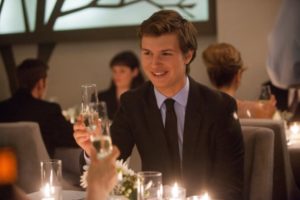 I know what you’re thinking— tear-fest…. However, I was incredibly pleased that this movie has the power to make you laugh even more than it does to make you cry. It wasn’t the typical tragedy audiences would expect; it is witty, unconventional, and as much light-hearted as it is heart-wrenching. With a quirky cast backing it up, it is the most entertaining “cancer movie” I have ever seen. Along with said actors/actresses above, the movie also features Willem Dafoe, as the author that Hazel and Augustus bond over, along with Nat Wolff, who plays Isaac, their hilarious and literally-blind, third-wheeling best friend. Fans will know Willem Dafoe from his role as the Green Goblin in the 2002 Spider-Man. Being an incredibly interesting choice, he perfectly portrays the obnoxious, drunken life of a haunted writer. And I hope it is not ill-mannered to say that Shailene Woodley seemed born to play a cancer patient, because she did so very well, with her dry, witty personality, hoarse voice and cute, round face (a little too glamorous to accurately portray a girl dying of cancer, but hey, it’s a Hollywood film, how close are they really going to get?).

However, I do question the choice to cast Shailene Woodley and Ansel Elgort as love interests just months after they played each other’s brother and sister in the hit movie, Divergent, also adapted from a critically acclaimed book series. The movies came out a little too close together to not make that connection slightly uncomfortable. Never-the-less, the actors did a good job of making fans forget that fun-fact.

Finally, book-loving fans of the novel will be happy with how well the movie followed the original plot. Minus a few scenes here and there, the parts that they didn’t cut out followed the book to a T most of the time (not all the time, of course, but for an adaptation, better than most). Fans and audiences will enjoy being a part of the movie that constantly evoked laughs, sniffs and sobs from those who attended this week’s Denver premier. So bring your tissues and your smiles for a unique story that finds a way to stick to your heart. If your not sure if you want to commit yet, watch the official trailer here: