When: Seven days a week, 11am-midnight

Cons:  Huge and unconventional flavors may be intimidating to those new to the craft beer scene

If you live in Colorado, chances are you know Oskar Blues.  Even if you’re not too familiar with the craft beer scene, you’ve no doubt seen their cans adorning shelves in liquor stores throughout the state.  I’d wager you’ve probably tried one of their beers yourself, and it was probably Dale’s Pale Ale, the best selling pale in Colorado.  However, you’re probably less familiar with what Oskar Blues is up to behind the scenes.  They’ve started a barrel-aging program for some of their lesser-known small batch beers.  They’re leaders in their community.  And they’ve done more good than you’d expect from any large company. 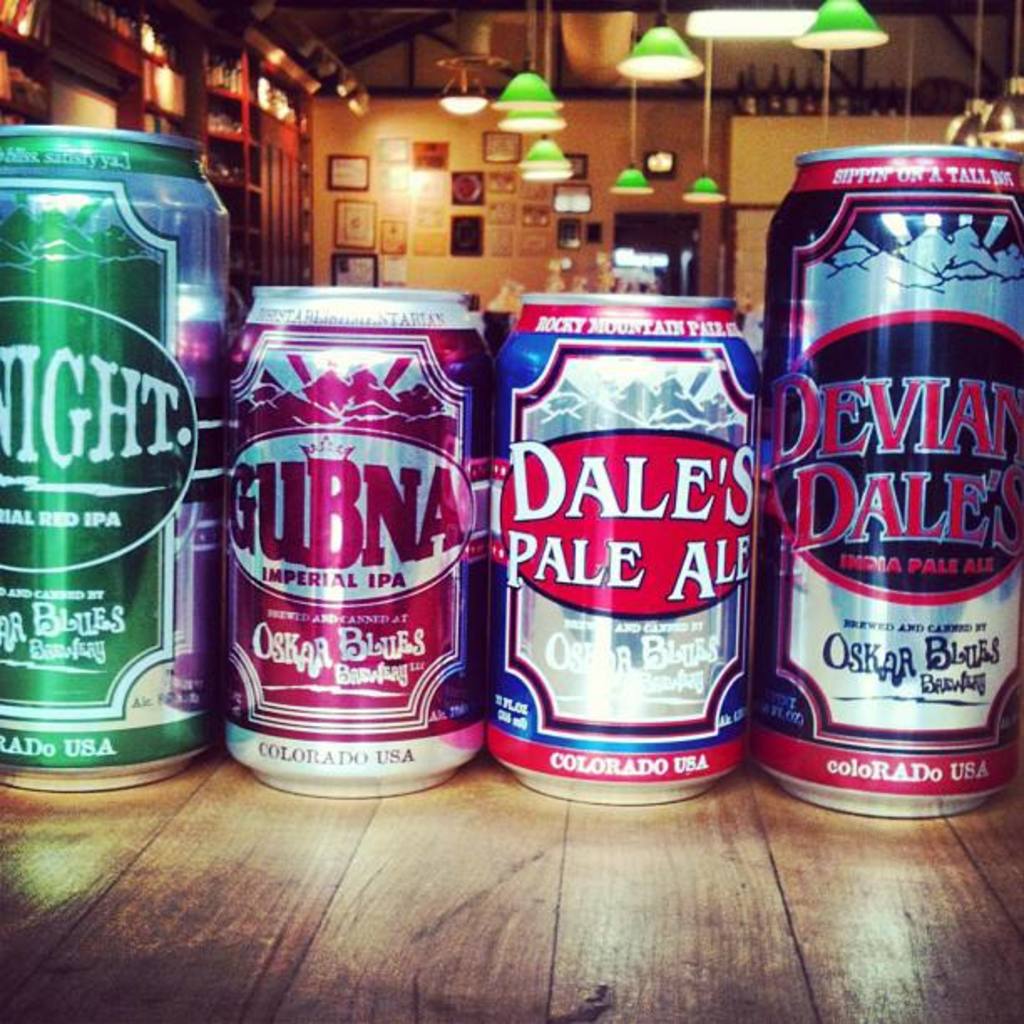 Chad and I sat down to chat at their Tasty Weasel Taproom, connected to their Brewery and “Anti-Corporate Headquarters.”  Having started in 1997 as a restaurant in Lyons that didn’t brew their own beer until 1999, Oskar Blues has grown into one of the leaders of the Colorado Craft Brew scene with their eclectic mix of big flavors.  “I think our beer styles are pretty over the top,” Chad said.  “We continue to push the envelope.  We want to be innovative and go against the grain.”

“This is a really cool time to be a part of craft beer,” –Chad Melis, Marketing Director at Oskar Blues

This policy began early in Oskar Blues history.  At a time when craft brewing was a bottle-centric industry, Oskar Blues decided to go their own way and began using cans.  Chad gave me three reasons for this decision:  1./ it’s good for the beer, 2./ it’s better for the environment, and 3./ it’s portable.  “We moved to Lyons to ride bikes, go hiking, and see Long’s peak,” Chad said, and a backpack full of glass bottles just wasn’t conducive to the outdoor lifestyle the staff were looking to support.  “This was something we had to do.”

With an attitude that emphasizes the collaborative nature of the Colorado craft brew scene, Oskar Blues has done quite a bit to take part in the community.  I remember Collaboration Fest, where Oskar Blues contributed four collaboration brews with four different breweries.  “[Collaboration] is one way to make sure you get out and see your buddies,” Chad said.  He and his compatriots find themselves in the fortunate position of being a leader in a young industry not yet ruled by venture capitalists, and so can guide their business in a more community-centered direction.

This is shown through their charity foundation Can’d Aid, which has raised over a million dollars since their inception nine months ago.  Much of this as been in support of Lyons following the flood that rocked the city and other areas of Colorado.  “[Can’d Aid’s] goal wasn’t to sit on money,” Chad said.  “It was to help people.  Getting money in was only important so that we could get it out.”  The effort began in support of the Oskar Blues staff, helping to make sure their employees were safe and had shelter.  That expanded out until they were doing their part for the town, the economy, and the people of Colorado. 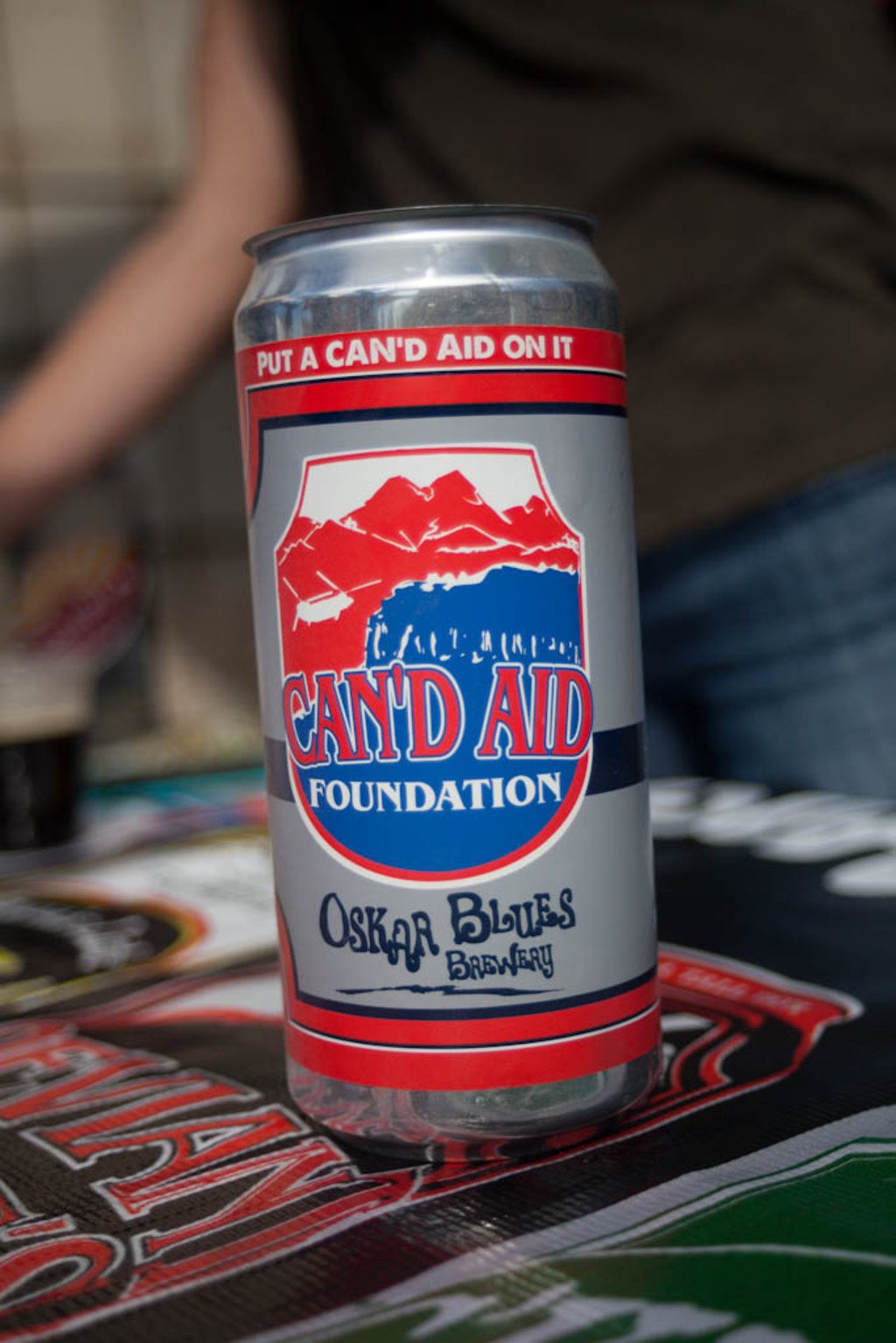 “We took it as an opportunity to learn how cool our neighbors are.”  As he described how the community came together in order to help each other rise above the disaster, I got the impression that Chad and Oskar Blues see Colorado as one huge small town.  What I expected to be “just another tasting” wound up reaffirming my faith in this industry, and this state.  Between their efforts to guide and expand the craft brew industry and their efforts to help support their community, they really restore your belief that people are good.  This might leave me a little biased in a review of their beer, but anyone who’s had their stuff knows they don’t need it.

With a copper color, great head and lacing, and a great malt aroma with floral and almost vegetable notes, this is an IPA that’s beyond reproach in many ways.  It has an effervescent mouthfeel that leaves you refreshed and has a clean finish that doesn’t flavor everything you eat for the rest of the day.  It’s well-balanced, leaning a touch towards the malt side of the spectrum, which is fine by me.  It’s got the sweetness to satisfy the average beer drinker with enough big hops flavor to cater to the hop heads of the beer community.  Not as challenging as some IPAs, but in many ways that’s this brew’s greatest strength.  It brings big flavor without becoming a novelty.  If you like well done hops, this is your go-to beer.

One of Oskar Blues’ small batch beers, I’ve been excited to try new craft lagers ever since I moved to Colorado.  It has a light aroma and a nice head that gives way to some amazing lacing as you drink.  It has a sweet flavor balanced by some light bitterness and almost a hint of sour that reminds you of a Belgian without fully committing to the style.  This might sound like a bad thing, but with the big, round flavor of this brew combined with the short, clean finish, there was no way I wasn’t going to like this beer.  I would consider it a favor if you drank lots of this, because I want them to keep it around.

There have been coconut beers out there that haven’t impressed.  Either they’re way to sweet or there’s such a small amount of coconut taste that you wonder why it’s considered a flavored beer at all.  This particular brew, which has become hugely popular among Oskar Blues’ small batch ales, stands head and shoulders above the rest.  It’s sweet and smooth, with enough coconut flavor that it reminds you of eating Mounds bars as a kid.  But this is balanced by a little coffee bitter flavor.  It has a creamy mouthfeel that is comforting and refreshing at the same time.  With its black/red color and surprisingly mild aroma for how much flavor it brings, give this brew a try if you want something unlike anything else you’ve ever drank. 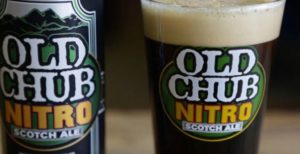 This beer wasn’t in the flight that I was sampling when I visited Oskar Blues, but Chad gave me a 16 oz can of Old Chub Nitro during the tour, promising me an amazing pour.  I was skeptical, but he said it with such pride in his voice that I cracked it open as soon as I got home, and he wasn’t joking.  The widget doesn’t make the can explode all over you the way some canned nitro beers do, and it has that creamy white-and-black fade that only nitrogenated beers have.  It brings a light, creamy sweetness that is balanced by a light bitterness, but the highlight of this beer is how refreshing it is.  I’m used to steeling myself before taking a long pull of a dark beer, but this one is like welcoming an old friend home.  Give this beer a try and you won’t be disappointed.  At the very least, it makes for a beautiful glass of beer.

I got into beer journalism because not only do I love craft beer, I love the culture that surrounds it.  People get into professions for a variety of reasons, but most of the people in the craft brew scene I’ve met with got into the business because they love it.  The folks at Oscar Blues seem, above all, to love what they do and believe that they are making the world a better place, and I’m on board.  I’ve loved Oskar Blues since my first can of Dale’s back before I can remember, but now that I know what they’re up to beyond delicious beer, they’ve become kind of my heroes.  It’s hard to believe that a company that genuinely wants to do good can be as successful as they’ve been, but they prove it’s possible every day.