A new Denver Art Walk has been born. Brilliant Brazilian and Denver artists have created two stunning new murals at the intersection of the Cherry Creek Bike Path and the South Platte, just along Little Raven and 15th Street in Denver. Thanks to the UAF, the path which has always been a spot for illegal tagging is now beautifully claimed and completely transformed.

The first mural represents local artists Jaime Molina and Pedro Barrios, the best of the best in Denver, with two characters representative of their distinct voice. The second mural was painted by international artists Claudio Ethos and Alex Hornest from Sao Paulo, Brazil. Both murals side by side have a stunning visceral presence along the path. They went up just in time for the River Festival this weekend. One of my new favorite spots, the goal will be to eventually fill up a section of the path, so it could turn into a public, fine art gallery for the city. 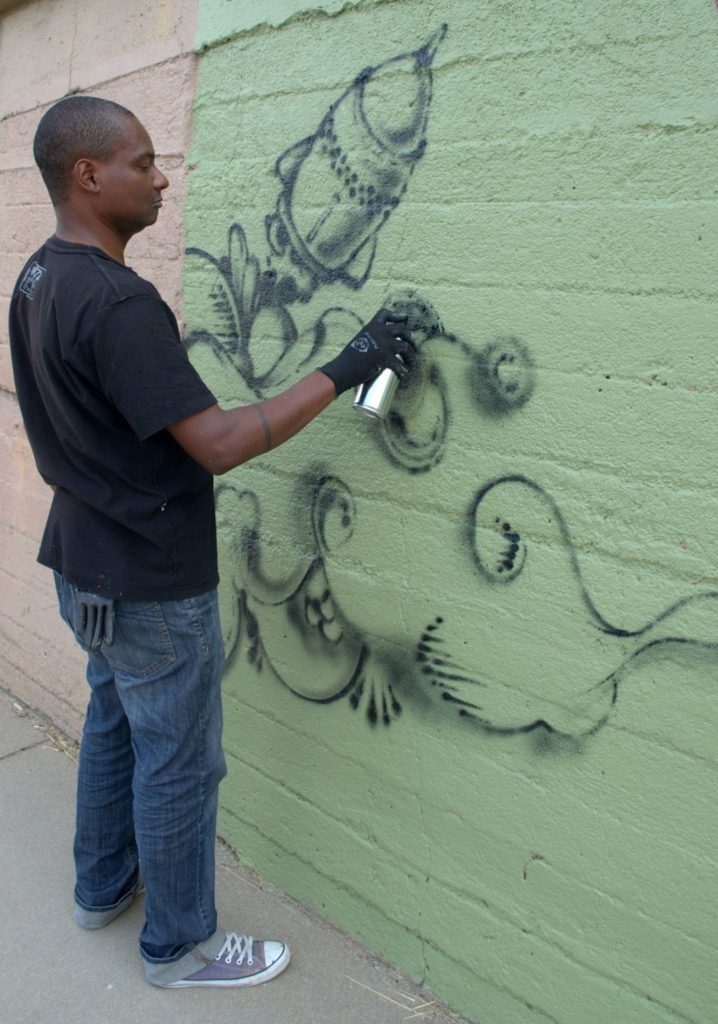 Alex Hornest aka ONESTO working on his details mural on the Cherry Creek Bike Path.

Brasileiros Ethos and Hornest have seen countless cities in search of fine art meets street-art perfection. Ethos told me one of his absolute favorite cities is Paris. Of course, he loves his home in Brazil, but often paints in Los Angeles (and is in fact going to LA from Denver later this week), San Francisco, New York, and all over the globe. Hornest, aka ONESTO, is a powerhouse of talent with a similar, wildly impressive roster of international murals. Collaboratively, the two have created a unique and priceless work of art. Ethos is calm, collected, seriously dedicated to his art, and hilarious. Hornest, with broken Portuguese mixed with English, is absolutely humbled, present and kind. The two mix well in artistic ability and in personalities. 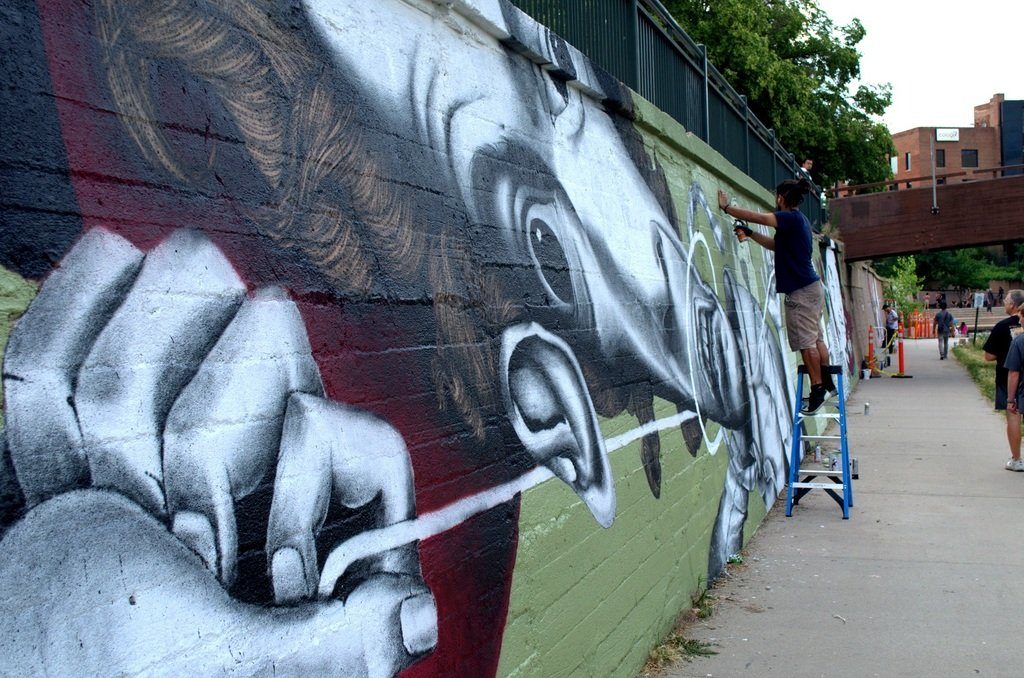 This piece has a mad hatter, Armageddon feel, yet I can’t look away. Ethos explained, “It is chaos but balanced.” There is chaos in the frightening, loud, energetic world. There are even missiles flying into a globe, representing absolute destruction. The two characters are caught in a whirlwind of barbed wire and seem to be playing tug-of-war of the mind. You should feel frightened. But within this chaos, within the loud and overwhelming pieces of the world, there is balance. It is beautiful and almost hypnotizing to look over. Ethos and Hornest displayed their style and signature perfectly and cohesively. It is fine piece of art worthy of the grandest galleries in the world, and Denver is lucky to have this piece on our concrete canvas. 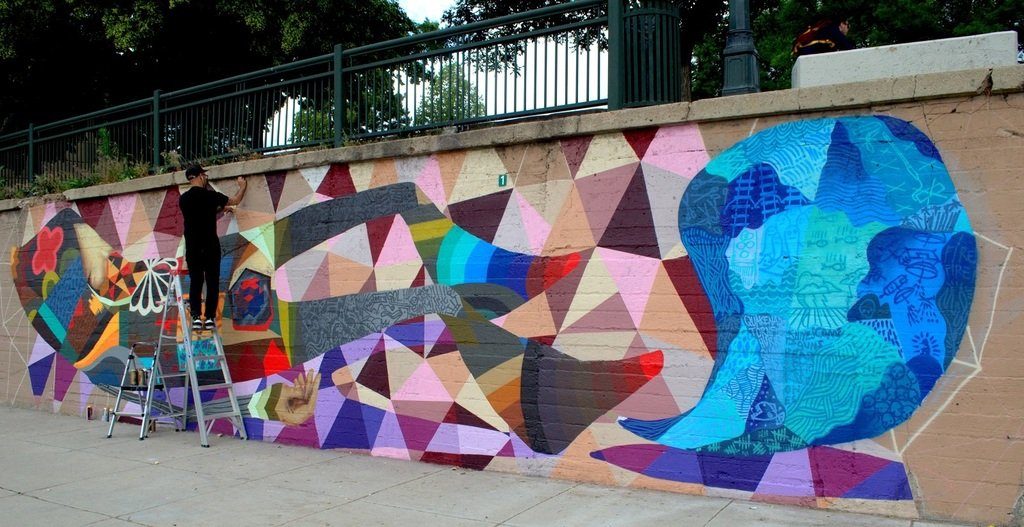 Jaime Molina and Pedro Barrios are Denver natives, yet are not strangers to national press. They have been featured on guru of everything art and subculture, Juxtapoz, as well as countless times on 303 Magazine’s Concrete Canvas. Molina and Barrios have received critical praise in Denver for their work in River North, at the Broadway Triangle Art Wall, at Snowball Music Festival, to name just a few. Jaime Molina even won Denver’s Red Bull Canvas Cooler project, sending his work (and hopefully himself, as well) to SCOPE in Miami this year!

Pedro Barrios is the curator and owner of Denver’s favorite new gallery located in The Source called SvperOrdinary, recently named one of Westword’s Best Galleries in Denver. The gallery will even show work by Jaime Molina this month, opening in July. Barrios is not only dedicated to creating a platform for local artists to show their work, but he is deeply involved in the community through his own artistic endeavors. The UAF invited Jaime Molina and Pedro Barrios to decorate the wall just West of the Brasileiros mural. This piece is one of the largest, most meaningful, and truly most inspirational of theirs to date. This spot where the two rivers intersect is full of energy and life, dogs, bikers, kids swimming, yogis, and now, fine art. 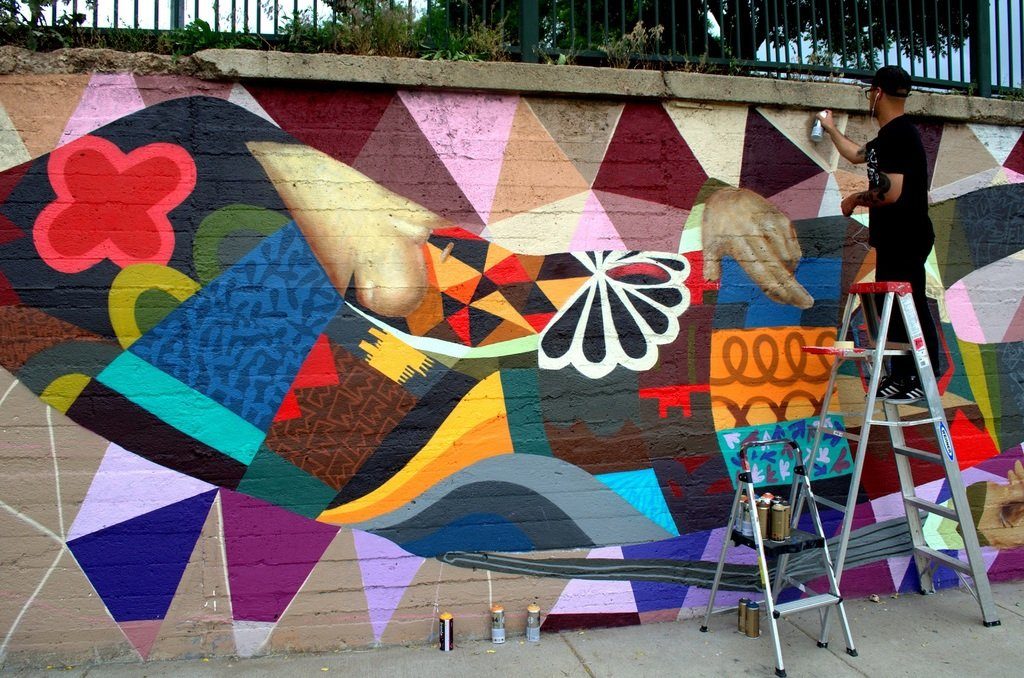 Jaime Molina’s touch is unmistakable. He creates folk-art that disrupts your expectations, making the existential truly accessible. Molina explained his latest Cutty character in this piece and its deeper meaning. Coming out of his heart are all of his fears. He’s laying back, resting, it says rest here across his stomach like he’s falling, but he’s not scared. The Cutty character is letting all of his fears come out of the hole in his heart and just realizing how minor they really are. How, in the course of a lifetime, these small fears and this negative energy means nothing. It represents a letting go of fear so one can move on and live. He’s fallen, he’s experienced these things and the worst is over. There is nothing to be afraid of anymore, and all that’s left is to live. 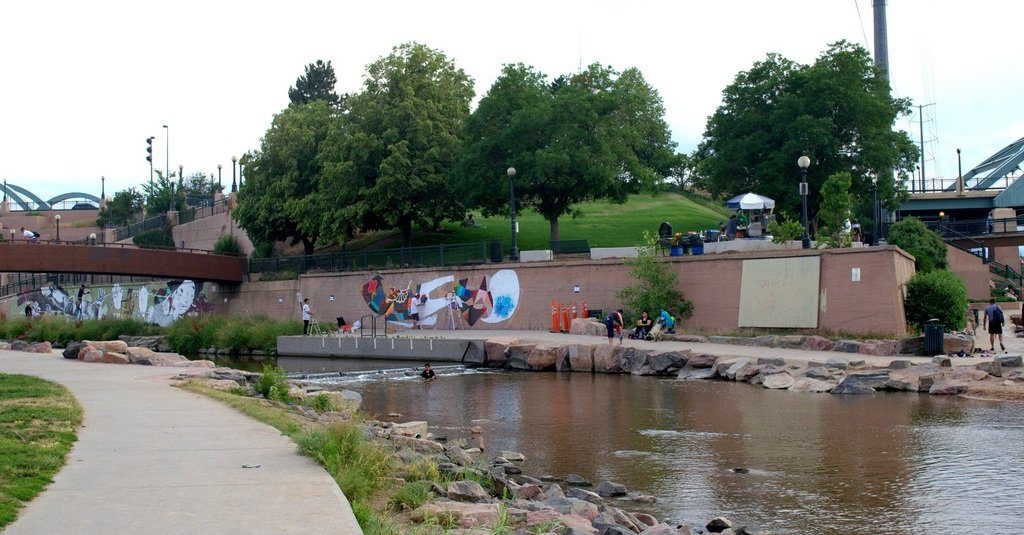 Cruise by the new spot on your bike at the end of the Cherry Creek Bike Path, or take a stroll on 15th where the view is exceptional. The four artists, collaboratively, have changed the face of the city with these murals. I cannot express how exciting it is to see fine art works coming to life on a wall that truly deserves the masterpieces. A special thanks goes to Adam who curates Denver Street Art with the UAF’s Michael Chavez and Mary Valdez for putting together such a feat.

Follow Claudio Ethos, Alex Hornest, Jaime Molina, and Pedro Barrios on Instagram. Be sure to check 303 Magazine on Instagram for the best, local street-art all year long!