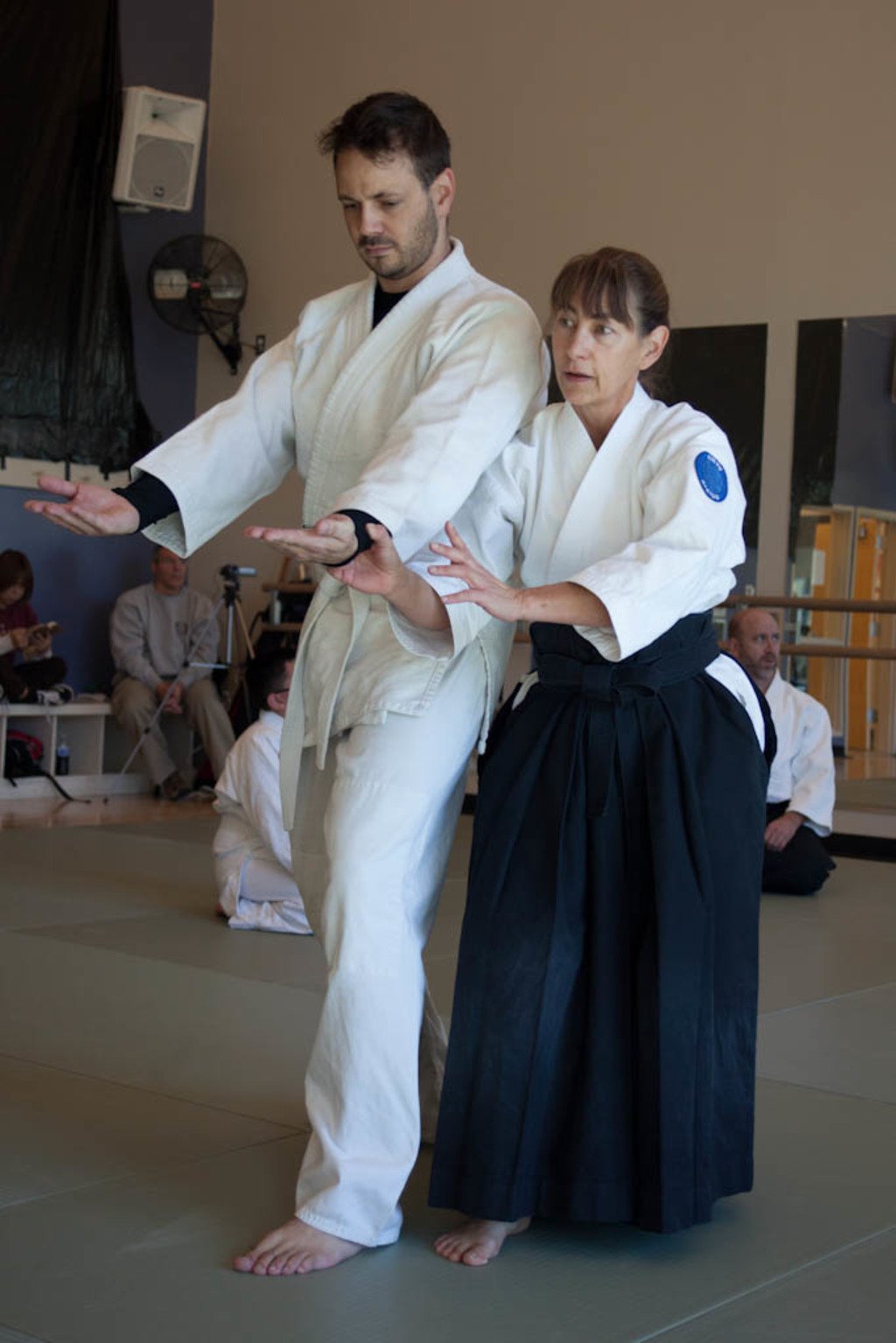 @Elletitude: Fighting Back with the Art of Peace 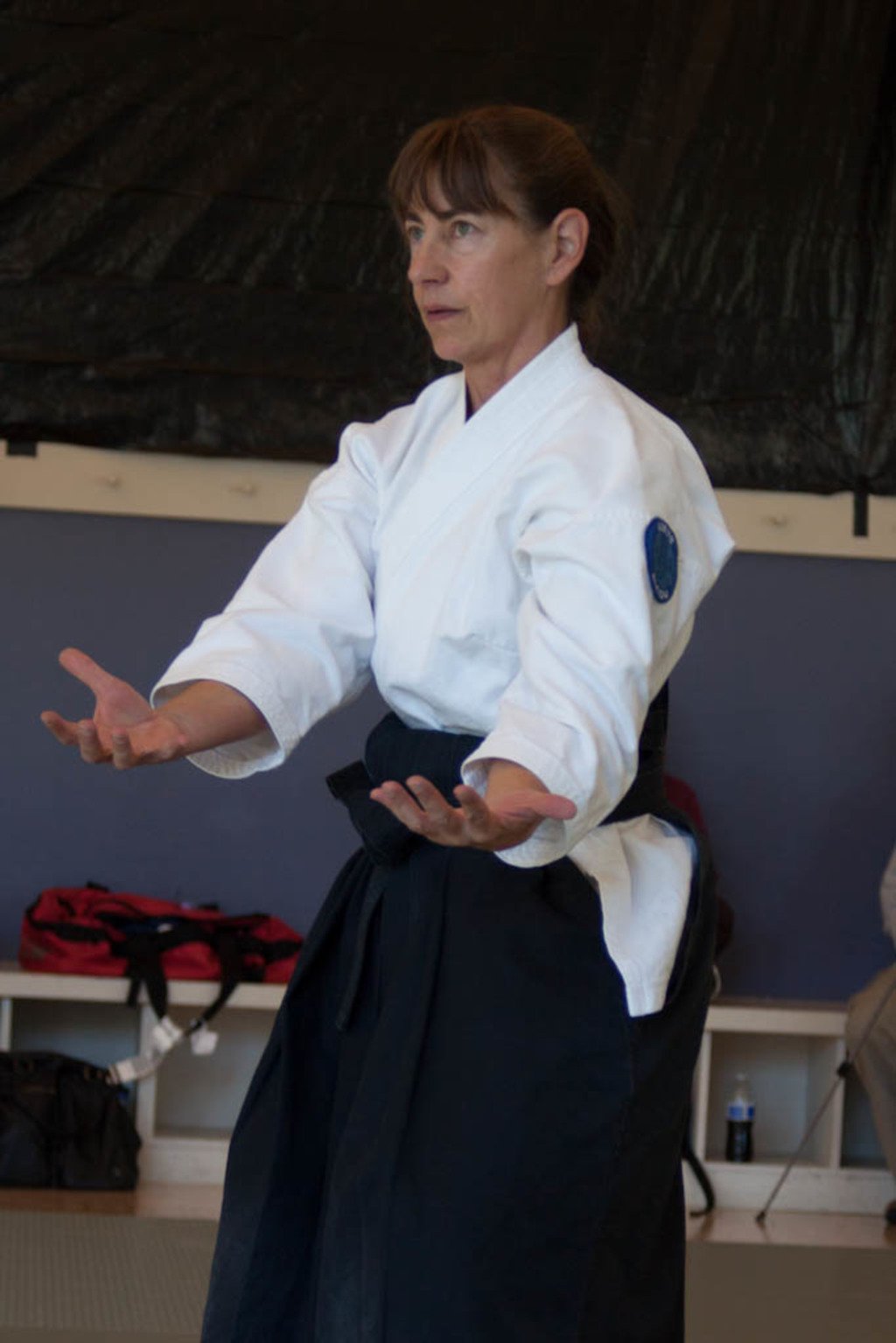 When Kara Stewart found herself in the midst of an abusive marriage, she found repose in a most unlikely place—an Aikido dojo. She learned to fight back against the circumstances she found herself in, but not in the ways you might think.

The techniques of the martial art known as Aikido, which involves the use of locks, holds, and throws to transfer the opponents’ movements against them, brought a sense of consistency, support and encouragement to Kara’s life. The constant falls and throws in Aikido taught her how to find a sense of stability when her home life had none, from planting her feet steadily into a soft floor mat to strengthening the core of her short, 5’2” frame, to the mental equanimity developed by commitment to consistent practice.

As you watch students of Aikido practice, you’d notice they move in circular motions and learn to redirect energy in unique ways– students of Aikido even consider falling and rolling an art in order to protect ones’ self. This is called ukemi.

As I watched Kara practice at Kiryu Aikido, the dojo where she practices, students would slap the mat with their arms upon falling. According to senior instructor, Sempai Les Steveson, students slap the mat to wake up their bodies and to send energy downwards to disperse it. The exercise allows you to become desensitized to the shock of hitting the mat on different falls. Steveson says that a core practice of Kiryu Aikido’s approach is to teach good ukemi so that students learn to practice how to fall in a safe way. The dojo also emphasizes weapons work and honors traditional techniques to build and guide students’ open-hand practice, resulting in strong Aikido techniques.

Practicing a martial art is not just a physical challenge– it’s also a mental one. Initially,  in 2006, Kara began practicing Aikido to improve her horsemanship. She had been involved with horses since she was a child and was on the path to becoming a professional horse trainer– her teacher, Mark Rashid, had begun using Aikido as an adjunct to his own horsemanship and the way he taught his students. According to Kara, tenets in Aikido like focus, breath, redirecting energy, intent and consistency are similarly important in the study of horsemanship in terms of creating mutually respectful bonds and relationships with horses. After Kara’s first class, she knew that she would be practicing Aikido for life. 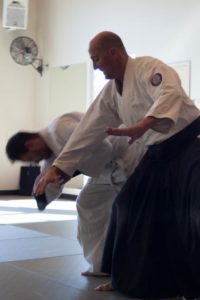 “After a few months on the mat, I started realizing there might be another reason I was drawn to Aikido, perhaps a bigger reason,” Kara says. When she started practicing, she had been in an abusive marriage for a long time. “As people in such relationships know, behaviors and actions that are not healthy start being labeled as ‘normal’ as a way to survive the absolute instability and confusion that define an abusive relationship.”

She says that at the time, she believed that perhaps every relationship had episodes of what she calls “swirling blackness and fear,” but that nobody talked about it, that everyone hid the ugly and frightening aspects of their lives the way that she did.

The more time she spent at the dojo, on the mat, and with teachers like Steveson and her Sensei, Andrew Blevins, who founded the dojo in 2003, she started to question if their lives were like hers at all.

“I don’t remember exactly when the realization hit me, but finally I knew without question that these men did not do such things, and that what I was living was not healthy or normal,” she says. “The biggest realization was that I could choose to have a healthy and stable life without abuse if I took the risk to do so.”

Her commitment to the practice of Aikido was changing her. The strength she found in the dojo and through her practice, reinforced by the consistency and strength of Blevins Sensei and Sempai Steveson, bled into all other aspects of her life. What started as a way to help her horsemanship had indeed turned into something greater.

“Eventually I was strong enough to leave the marriage, but it was by no means an easy task,” she said. She recalls being in fear for her life after she left; and the process between leaving and being fully free of the marriage took two years—during that time, she wanted to give her former husband the chance to seek counseling to see if he could live without anger as the reaction to ever situation. She says that he did eventually change, and that the consistency of her Aikido practice and the people in the dojo provided the grounding and stability to risk leaving.

“I believe that without Aikido, I would still be there,” she says.

“When I test for Sandan will be up to my Sensei, but I approach every single practice as if I am testing for Sandan,” she says. “After all, how we practice is what we become.” 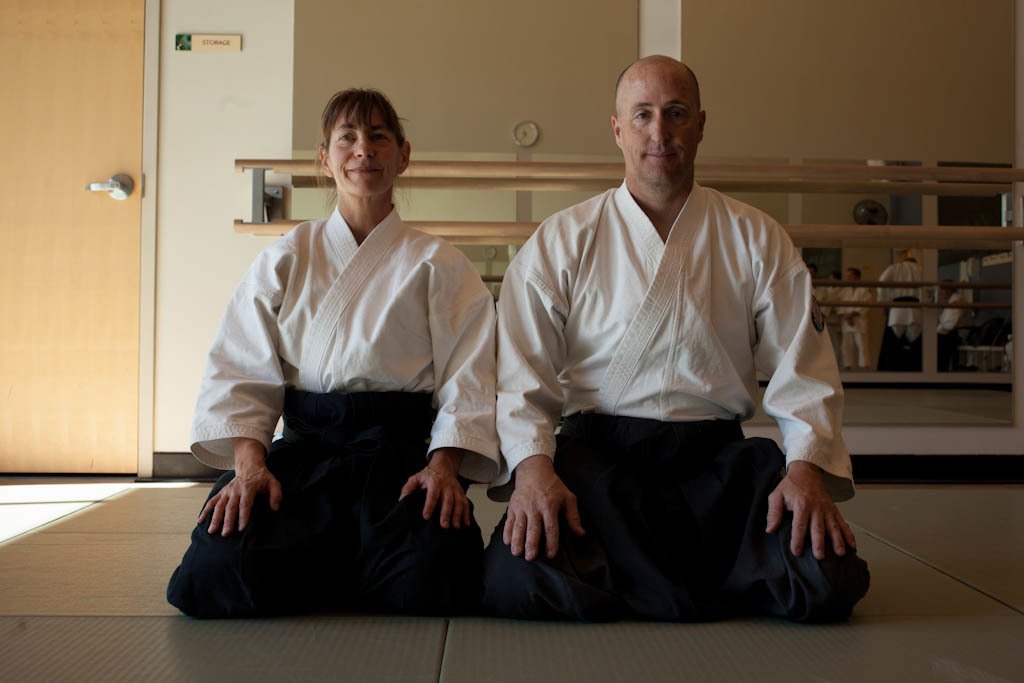 She also became a co-instructor with Sempai Steveson after being an assistant instructor for about two years. Sempai Steveson has been teaching at the dojo since it was founded by Blevins Sensei 10 years ago. Kara says one of the most important things to a martial artist’s success is finding a great teacher and a healthy, supportive dojo, both of which she found in Blevins Sensei and his dojo Kiryu Aikido— his talent and passion for the martial art inspired her from her very first class seven years ago, and she feels that as a new co-instructor she is honored to be able to carry on her Sensei’s legacy and the strong style of Aikido that he teaches. She is also honored to work alongside Sempai Steveson.

“Les-san has always been a cherished Sempai, and he has been instrumental in my growth and progess. He and I make a good team, bringing with the same focus, intensity and dedication to practice,” she says. “We also bring complementary approaches to our teaching– for one thing, he’s really tall, and I am not! He brings his career in law enforcement to his practice and teaching, and I bring my expertise in horsemanship.”

These elements together allow the two teachers to creative a supportive and cohesive environment in the dojo, she says, since they can both approach the differences in students new and old, in their abilities and in their unique paths in Aikido.

“Aikido is the hardest thing I’ve ever done in my life, and without question, it has brought me immeasurable rewards, immense joy and deep life-changing growth,” she says. “At least for me, my practice has underscored the truth that you get out of things what you put into them.”

Elle Groves is a freelance reporter, writer and blogger bent on deconstructing diet culture and keeping her life full of food, fitness, family and friends. She is currently writing a novel that spans the rise and fall of a girl’s struggle with eating disorders and her DIY-recovery. Contact her at [email protected] or follow her on Twitter @ellegrows.