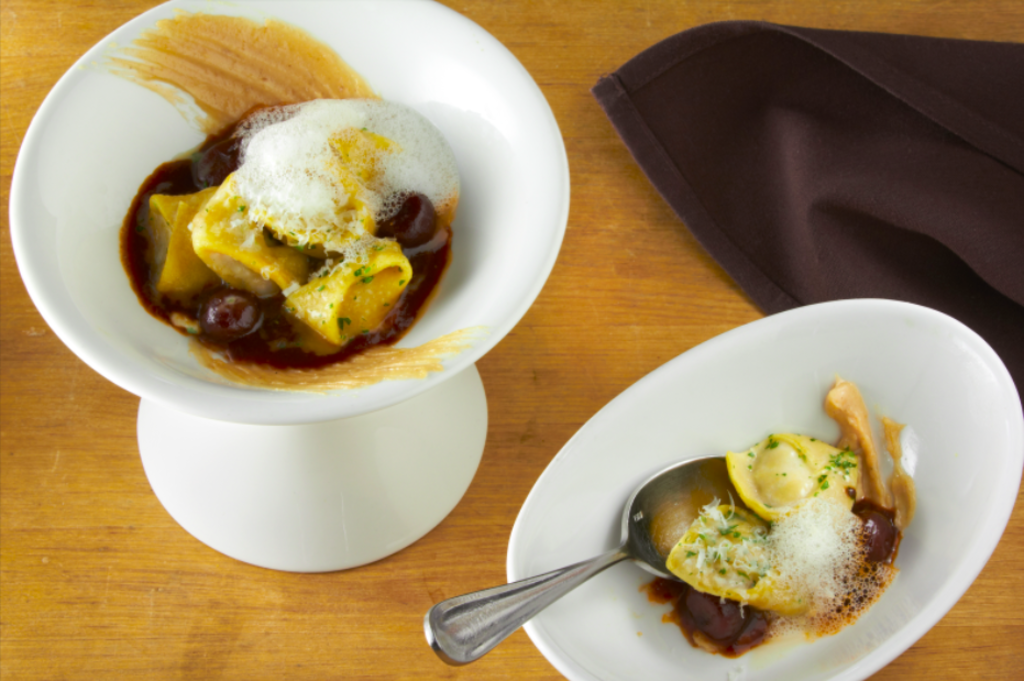 What: A Windy City trip to Storefront Company and Mercat a la Planxa

Don’t Miss: Both of these restaurants boast high ratings from many Chicago publications. From our experience, everything that we ordered from the menus was unbelievable. You won’t be disappointed!

As Denverites, we are lucky to be a short flight away from many great U.S. cities. Whether your Table for Two is shared with your best friend or significant other, an after-work weekend trip to California, Vegas or the Midwest is definitely feasible. This past Labor Day weekend, I visited my hometown of Chicago to show my boyfriend around and meet up with some of my friends. We stopped into Storefront Company in Wicker Park and Mercat a la Planxa in the Loop and were treated to an amazing array of dishes and drinks.

I have to admit something: I did not bring my boyfriend to these Table for Two dates. Don’t worry, it’s nothing scandalous. Work obligations called him back to Colorado so I used this time to catch up with some old friends. While I normally am suggesting restaurants for date ideas, I still know how important it is to invite your best friends to your Table for Two. 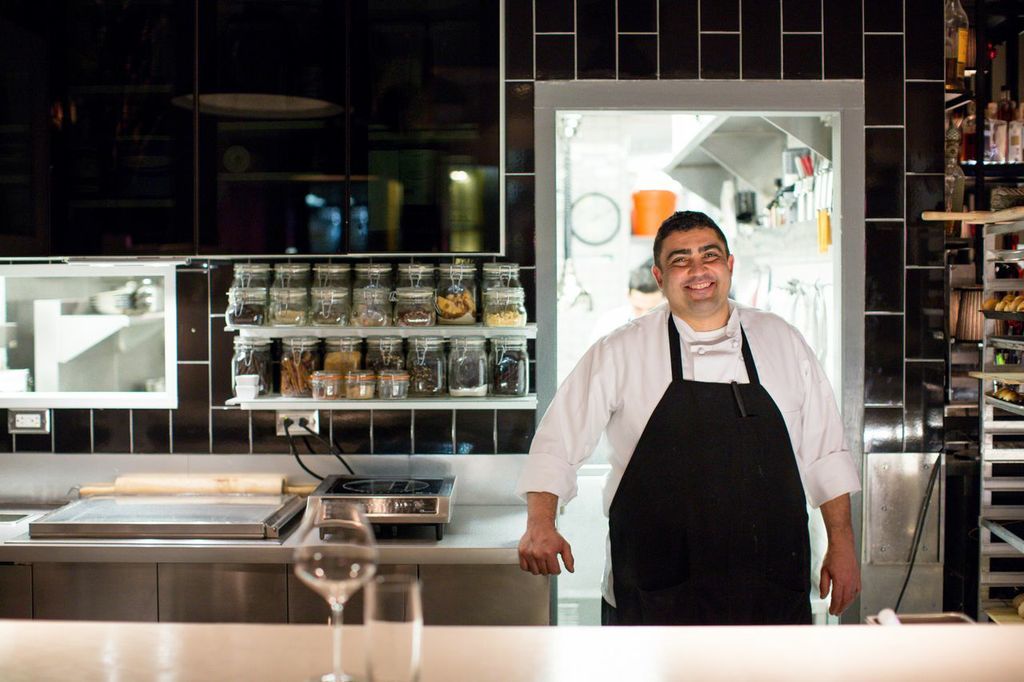 Celebrated for its home style “Kitchen Counter”, it’s easy to see why Storefront Company was recently named Chicago’s hidden gem by the Chicago Tribune. Pull up a seat at their kitchen counter bar and you’ll get a view of head chef Bryan Moscatello and his crew at work. They lay out their fresh ingredients for all patrons to see and pay close attention to detail, making their dishes into works of art. Did I mention that they are delicious as well?

We started off by browsing their cocktail menu. I settled on the Strawberry Kitchen cocktail. Made with B&E Bourbon, byrrh, jam, syrup, lemon and rhubarb bitters, this drink was a nice mix of bourbon and sweet flavors. I may be a Food & Booze writer, but even I had to Google what byrrh was: a wine-based aperitif. This hint of red wine made the drink go down smooth. Little did we know that we were about to embark on a 6-course journey of fresh meats, cheeses, and delicate touches of flavorful accent ingredients.

A dish that stood out during thecourse of the evening was the Black Bass. The Bass is poached in butter and genmaicha. Having lived in Boulder for 4 years, I was well aware that genmaicha is a type of green tea. I expected this combination of tea and butter to be strange, but the dish literally melted in my mouth. Finished off with lemon, honey and a pinot nero rich wine base, this dish was completely filling even as part of the tasting menu.

With its constant raving reviews and prime location in the trendy Wicker Park neighborhood of Chicago, it is very clear that Storefront Company is becoming a hot spot. Located near great shopping spots and boutiques, Storefront Company is a must-stop restaurant during any Windy City trip. 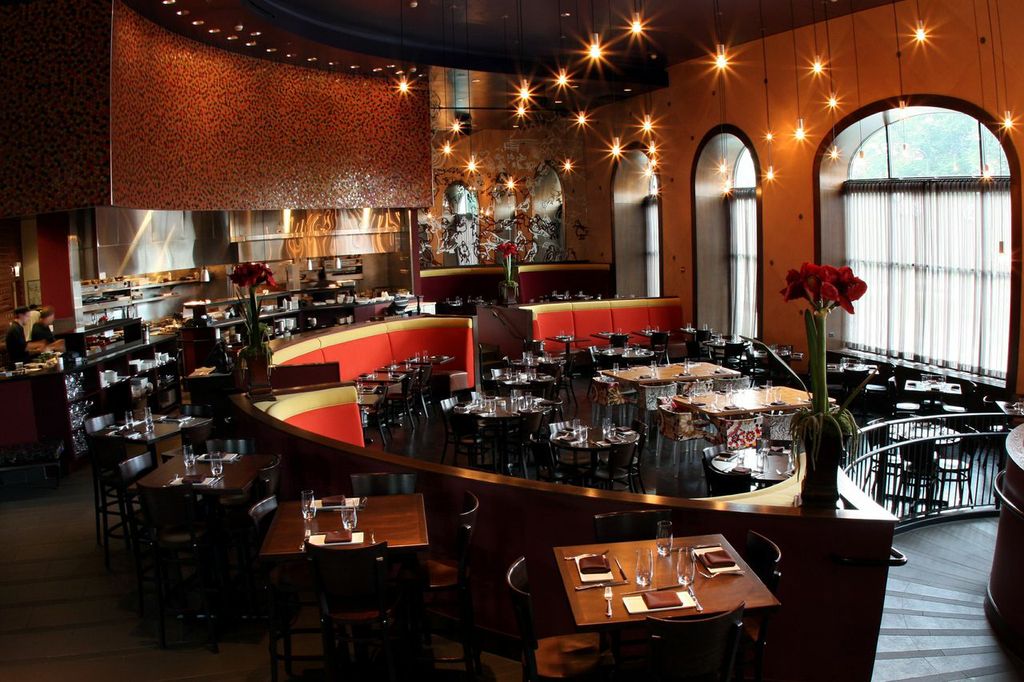 Located in the heart of downtown Chicago, Mercat a la Planxa is a must stop for anyone visiting the city. Across the street from Millennium Park and the famous “bean”, Mercat a la Planxa features an assortment of Catalan-inspired tapas and cocktails that make you feel as though you have traveled to Barcelona. They are that authentic, yet have a contemporary feel that’s hard to beat.

Mercat’s cocktail selections are mostly fruity flavors, but pack a mean punch and go perfectly with their tapas. I chose the La Mora bourbon cocktail that was muddled with blackberries, mint, agave nectar and black pepper. I was a little taken aback by black pepper in my drink, but the spicy flavor and bourbon really complemented the blackberries and made the drink a fruity and hearty combination. They also had sangria options that looked delectable and were mixed with strawberries and tarragon. Can’t decide on which sangria interests you the most? Mercat offers a sangria flight so that you don’t have to choose.

The tapas menu at Mercat a la Planxa features a mix of traditional and modern choices. On the traditional side, the bacon wrapped dates did not disappoint. Stuffed with almonds instead of pits, they were easy to eat and very savory, and we didn’t have to eat around the center worrying that we’d chip our teeth. When our server asked if he could drizzle the dates with their blue cheese glaze (seriously, who says no to blue cheese?) I was completely sold.

A less traditional item on Mercat’s menu was the Conill amb Castanyes. This was a braised rabbit agnolotti, which was essentially a pasta shell stuffed with rabbit. I’m not normally a rabbit eater, but I decided to be adventurous and it was a great choice. It is served with a roasted chestnut puree, brandied cherries and a brown butter foam. Yes, foam. The dish looked totally strange when served but was absolutely delicious.

A less traditional item on Mercat’s menu was the Conill amb Castanyes. This was a braised rabbit agnolotti, which was essentially a pasta shell stuffed with rabbit. I’m not normally a rabbit eater, but I decided to be adventurous and it was a great choice. It is served with a roasted chestnut puree, brandied cherries and a brown butter foam. Yes, foam. The dish looked totally strange when served but was absolutely delicious.

Mercat a la Planxa’s easy location in the Loop makes for a great stop if you are staying in any of the downtown hotels. Make a day of wandering through Grant Park, stopping at the Art Institute, and then heading to Mercat a la Planxa for a hearty, flavor filled tapas dinner.

As much as I enjoy Denver, I encourage you to make a trip to the Windy City. I’m lucky enough to have friends and family in both states and going home always means finding a new restaurant adventure.