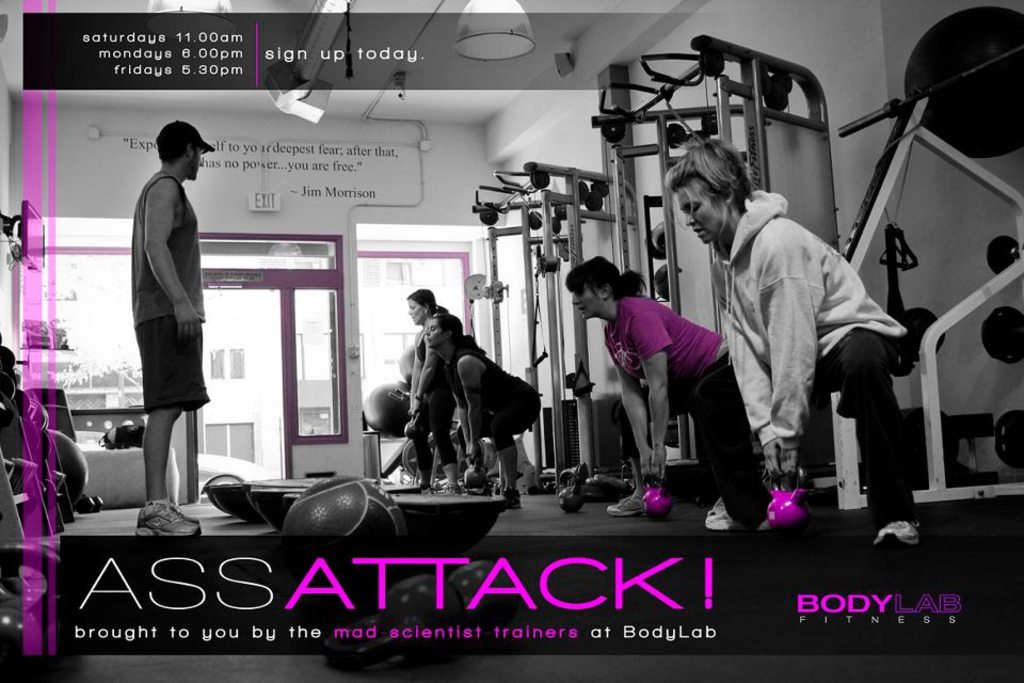 The School of Sweat Hot: B is for Buttocks

As a young misfit, I was given the nickname Bung. I’m not 100 percent sure what that word means anymore, but I’m positive it has something to do with my backside. As the years went on, I was oft referred to as Laura Jane Standley Butt. I even learned how to do the booty shake around age sixteen–a fact my father is surely proud of–which is a dance that consists of turning your ass toward some lucky onlooker and shaking the jiggly mass that is the upper leg. By the time I was in college, my friends talked about resting items on my hindquarters: glasses, books, whathaveyou. Fact is, friends, I’ve always had a sizable ass.

Now, having a large ass region isn’t the worst thing on the planet (thank you, Jenny from the Block). And, frankly, I never thought it was anything but one of god’s larger blessings. But, let’s be fair here. The way an unclothed, nice, big tushy looks in comparison to one that is just a place fat goes to die is different. Say it with me: cottage cheese. So, in order to make sure we’re all fanny fair, Tyler Corbett of The BodyLab decided to start a new group–the Ass Attack.

More than just a place to feel like a video hoe, the Ass Attack class is one of the most enjoyable exercise experiences around. First off, cracking (get it?) ass jokes for thirty minutes as a means to distract oneself from a physically trying–and maybe even a touch awkward?–workout is extraordinarily effective. Being told that you should feel both sodomized like a $5 hooker (except you’re paying for this feeling, which changes things, I think) is extremely motivational. 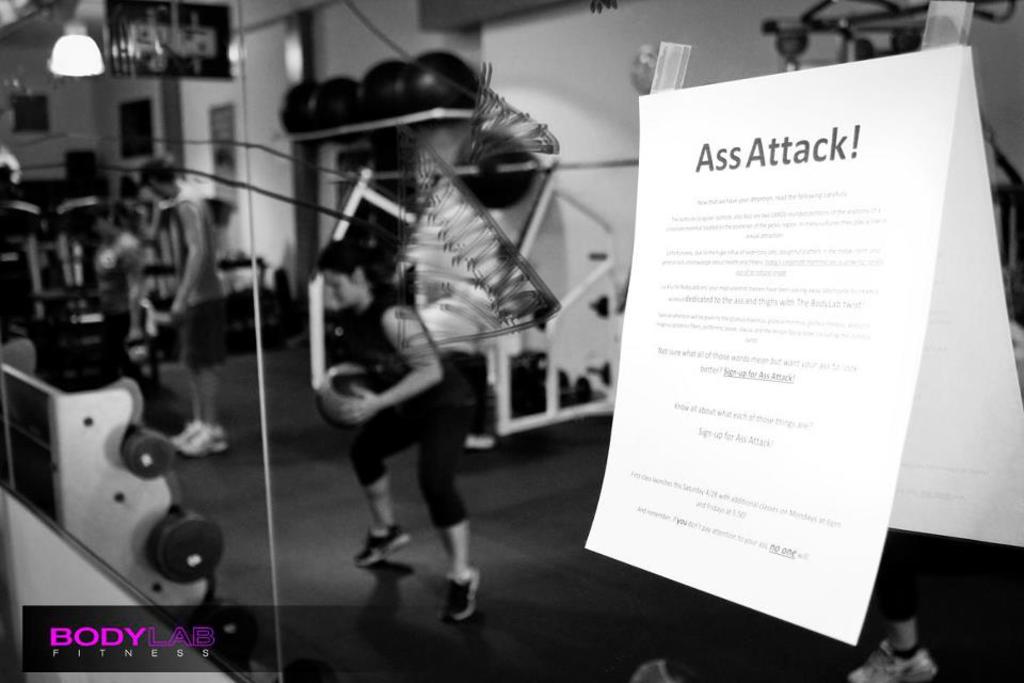 Now, to be honest, I thought I wasn’t getting enough bang for my butt, initially. First time at anything is always a little tricky–what goes where and for how long? So many questions. And there was a photographer (as proof of the photos herein), which is always a little distracting. I mean, Tyler said to clinch my cheeks with gusto, but I’ve seen photos of puckered bums, and no matter how hot that booty be, this is not an attractive look. And, then, there was the thrusting.

Imagine gripping a bar to hold you at ninety degrees on your toes. Picture it. Now, picture squeezing a ball between your thighs. Now, you pop, pop, pop that thing and then, you squeeze and pop…All at ninety, all on your toes. It’s an attractive move, to say the least–but was it effective? Yes. In fact, it was a bit beyond effective. It was terribly challenging. But, pair all of this thrusting with one particular musical gem and you’ve got BodyLab gold: Salt N’ Pepper’s “Push It” found its way into our open ears and it was like the clouds parted  for the sun to shine down on our beaming cheeks. It was like someone had our back. It was one of the most serendipitous moments my ass has ever seen…ever.

Now, between it being our first time–Tyler’s included–and all of the ass cracking jokes that we were cracking and cracking up about, I sort of didn’t even realize how uptight I had become (or rather, what a tight ass I turned into). As I waddled to my car looking like someone who’d just ridden a stallion for half a day, I thought, “Wow. The BodyLab just got one step closer to the dream: getting a superb ass whooping but without even knowing it.”

The only thing that I think is getting overlooked here is this: the world may value a woman’s ass more than a man’s, but there is no better way for a man to stick out (okay, yes, literally, but I do mean among the other menfolk) than to have a gorgeous behind. So many guys spend so much time on their upper body, and I like them for it. Sure. But, what about their skinny legs and lack of butt? The ass is a problem area for most people–either you have too much or not enough and it’s the gray area that we all should aim to live in. Men included. So get your ass to the gym, peeps. Here’s the biggest cliche in a gym rat’s world “You can’t get no booty if you don’t have no booty.” OR the variation: “If you don’t care about your ass, no one else will.” There, I said it. Now, let’s give new meaning to bringing our A game.

AWESOME THINGS I’VE HEARD AT THE LAB SINCE LAST POST

“These dumbbells are like children to me. That’s how much they mean to me. They each have a name…That’s Matilda and that’s Pablo. They are in remedial classes in school, so feel free to come down here whenever you want and tutor them.” – Tyler Corbett.

“They’ve done studies which prove that enough inactivity will cause what’s referred to in the medical community as ‘hot-dog bones,’ which is when the bone material actually turns into pure hot dog. In extreme cases, autopsies have also shown chili and cheese within the hot-dog bone structure.” – Matt D’Amico

“Just meditate on the number and let them flip past like pages on a calendar: 1…2…3…” – Matt D’Amico

Laura Standley has been the editor in chief of 303 Magazine since 2007. She has been blogging about fitness since January 2011. To read her past posts, click here.