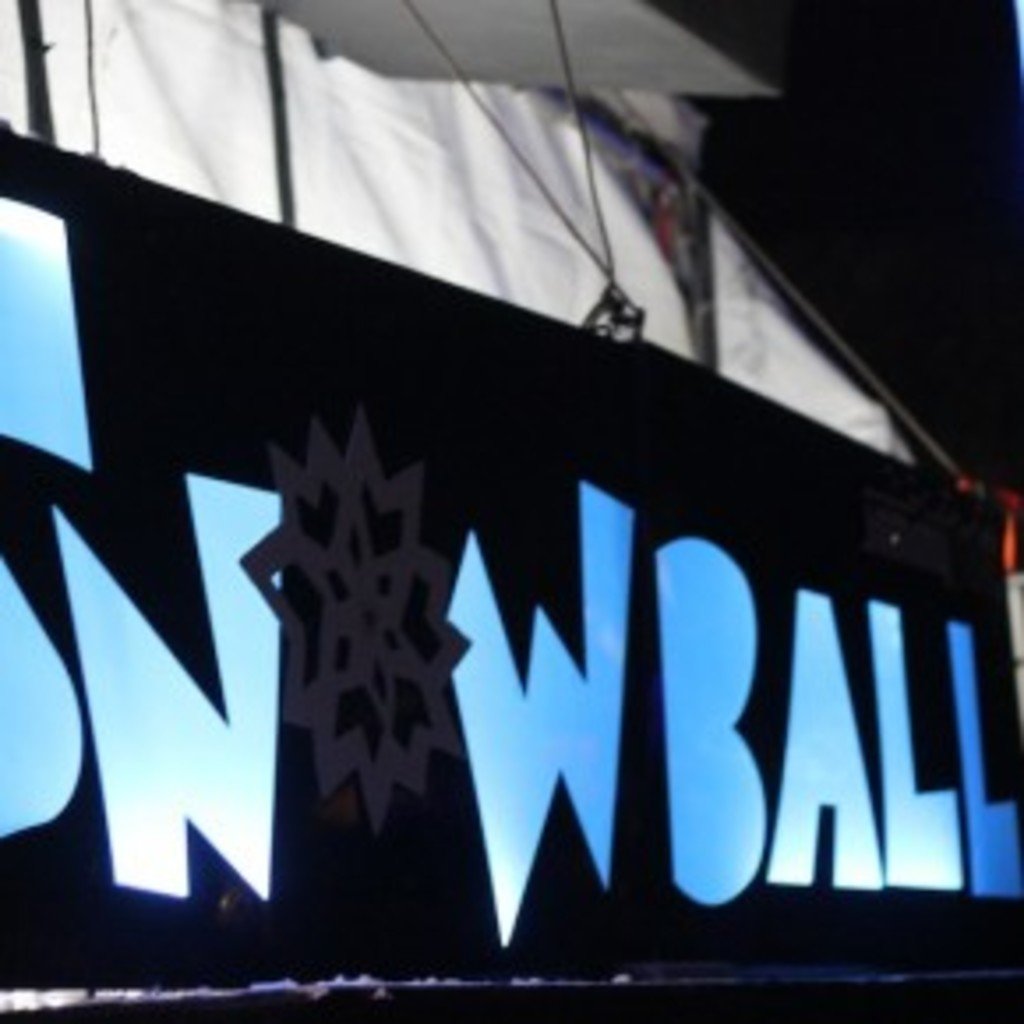 As the snow, ice, and mud still settles from the three-day adventure that was Snowball Music Festival and the headaches and depression come to an end, we here at 303 Magazine want to take a fond look back on the highs (and some lows) that occurred during the fun and music-filled weekend. For this past Friday, Saturday and Sunday, thousands of people all flocked upon the humble Nottingham Park in Avon to enjoy some of the best acts from the worlds of jam, electronic, hip-hop, folk and more. Concert-goers, while undoubtedly fueled by a steady influx of booze and drugs, apparently both hard and soft, and heavy doses of their favorite music, spent their days meeting new people, bouncing around to different stages, and most importantly, trying to keep their balance in the compromising conditions.

The first night, as anyone who was there can attest, brought some of the most unbearable conditions imaginable for a wintertime festival taking place outdoors. As the sun dropped behind the mountains, the temperature dropped to right around zero degrees Fahrenheit and stayed there, challenging everyone to the extremes. Gloves, hats and socks became useless to block out the freezing temperatures and desperate fans huddled together in the tents hoping to use each others’ body heat to keep them warm. While the temperatures certainly made it more difficult to enjoy the music, it certainly did not make it impossible as Mimosa was packed to the brim in the Groove Tent and Big Boi and Rusko brought out the crowd and the energy to the most frigid Main Stage. Luckily, when the show ended that night, those who made it had much warmer weather to look forward to in the coming days.

Saturday brought with it sunshine and even more people. All the weekenders who came out from Denver and Boulder and undoubtedly some daily ticket holders packed in to see one of the most amazing and diverse lineups of the weekend. From my hotel room, I watched as people arrived at the festival much earlier than on Friday, pouring in to catch early acts like Pierce Fulton and Figure in the Groove Tent and Trampled By Turtles on the Main Stage. With the Heat Hut playing host to disco and funk house DJ Cassian, the Groove Tent hosting back-to-back pounding dubstep and electro with Dillon Francis and Dada Life, and the Main Stage giving indie fans The Kooks and TV On The Radio, there was plenty to choose from and enough diversity to satisfy everyone. However, it seemed like everyone chose to migrate to the Main Stage for the headliner that day: the infamous Snoop Dogg. Snoop played with a live band and gave us all our favorite throwback favorites as well as breaking it down with his more recent hits “Sexual Seduction” and “Drop It Like It’s Hot”. While he paced the stage continually sucking down on blunts and encouraging the audience to do the same, he kept the crowd completely involved with his call-and-response tactic and by dropping jam after jam.

The last day seemed a bit quieter early on compared with Saturday but the energy picked up quickly as Minnesota and Boombox took the stage in the Groove Tent. Boombox undoubtedly made a ton of new fans and satisfied old ones with their unique live show and interesting style of music. The sun was high and, despite the deep mud, nobody could complain about the warmest temperatures of the weekend. Plastic Plates threw down an impressive set of disco house in the Heat Hut who was then followed by electro youngster DallasK, who at only 20 years old had more than enough energy (and the proper tunes) to get the crowd jumping throughout his entire set. Then, everyone still standing was left with only one choice for the last hour and a half: dubstep kingpin Bassnectar. After putting on such an amazing show last year (not to mention continually selling out venues across the country), the crowd in attendance knew they were in for an amazing performance. Bassnectar played a mix of mellow and intense dubstep, complemented by his entrancing light show and his head-banging antics. Even though that night ended early at 8 pm, nobody left disappointed and, for many, the night was far from over.

DallasK In The Heat Hut

In an interesting move, Snowball sponsored nightly afterparties around popular venues in Avon and Vail featuring many of the artists from the festival and even a few who didn’t perform at the festivals. The lineups across the venues, which included Agave and the recently opened Montana’s in Avon and Sandbar and Samana’s Lounge in Vail, were so well put together that the events quickly sold out, many well in advance of the festival. Agave, the largest club in Avon, played host to Diplo, one half of Major Lazer, on Friday night, Dillon Francis and Dada Life on Saturday and Boombox on Sunday and certainly attracted a hell of a crowd across the three nights. Sandbar, while it is a few exits down the highway from the festival site, also had no problem attracting massive crowds for their three nights of amazing music. The afterparties gave everyone a chance to keep the party going while being able to do so inside and anyone who attended one could appreciate the warmth of the club scene after being out in the cold and arid air all day.

In a statement released to the Vail Daily on Monday by Avon Police, apparently the festival wasn’t quite as tame as it seemed. While a police presence was certainly visible, both in the form of uniformed and undercover officers, it is staggering to believe that 140 people were arrested throughout the three days, 40 of which could face felony charges. Anyone in attendance last year could likely attest to the fact that the increased numbers of arrests (there were only 48 last year) could only be related to the increased security and beefed up police presence inside the festival. According to police, ecstacy, cocaine, mushrooms, acid and naturally pot were the most prevalent, with a few isolated cases of harder drugs. But with all the drugs floating around, the most arrests were made for underage drinking and police did not mention any deaths.

So, all things considered, Snowball this year proved to be a massive success. With enough time to put together a game plan this year, security and police felt more prepared and comfortable to handle the crowds of people who turned out to see their favorite artists and indulge in three days of debauchery. The weather posed some issues in the form of freezing temperatures and equipment malfunctions but never broke the spirit of the thousands who turned out for the fun. The afterparties provided a new dimension to the festival which would have been lacking for many with the party ending rather early every night. Finally, Snowball nailed their lineup this year so that all kinds of music fans would leave satisfied and learn about something new and exciting in the process. So for those who made this their first Snowball, it is doubtful that it will be their last. See you all next year.