From the outside-chipping beige paint, rickety chain-link fence and a sticker-tattered door, the joint looks like any old house you’d pass by in Denver, but what waits behind the immediate exterior is something locally treasured — the Seventh Circle. Before entering the venue, the rough yet emotive music can be heard from the back. Walking through the barrier of entry — a front door plastered with stickers — a quick flash of a five-dollar membership card and an optional donation is all that’s needed to get into the show. To those more familiar with $20 minimum ticket prices, not including the cost of drinks, it feels alien to walk into a live music space with such ease.

Navigating past the scarcely-labeled bathroom and the charming old fan that vigorously spins on the ceiling, the music leads attendees to the heart of the venue: a stage that shouldn’t be defined by its size, as its small appearance fails to stand as a testament to the amount of energy that radiates from it. 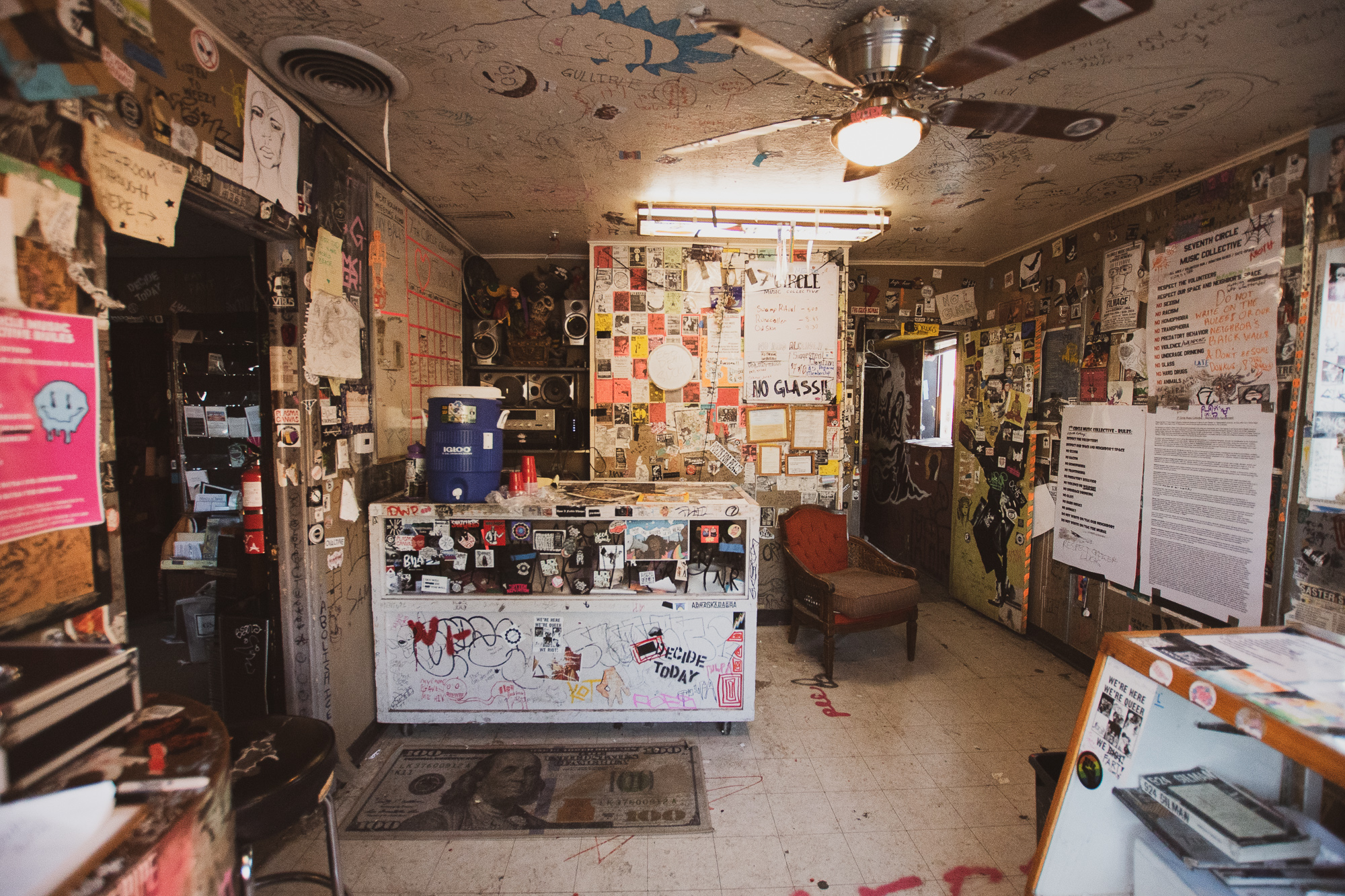 A warm breeze flows from the gaping mouth of the garage, carrying with it the sweet cacophony of music bleeding from the stage. Looking around, disassociating from the identity of an audience member, a pure sense of community can be seen. Faces bearing the full spectrums of age and gender identity can be seen laughing between shared drinks and head banging. Reimmersed as a member of the observed crowd by the intensity of the music, it’s clear that something unique resides in these walls.

Seventh Circle Music Collective has come to be a staple in independent music, housing hardcore and punk shows in an independent fashion that sets it apart from any other venue in Denver. Focused on creating a space for independent artists to get their start and fans of any age to step into the live music scene, the DIY venue has become “Denver’s CBGB” to many, as volunteer Lucyfer explained. 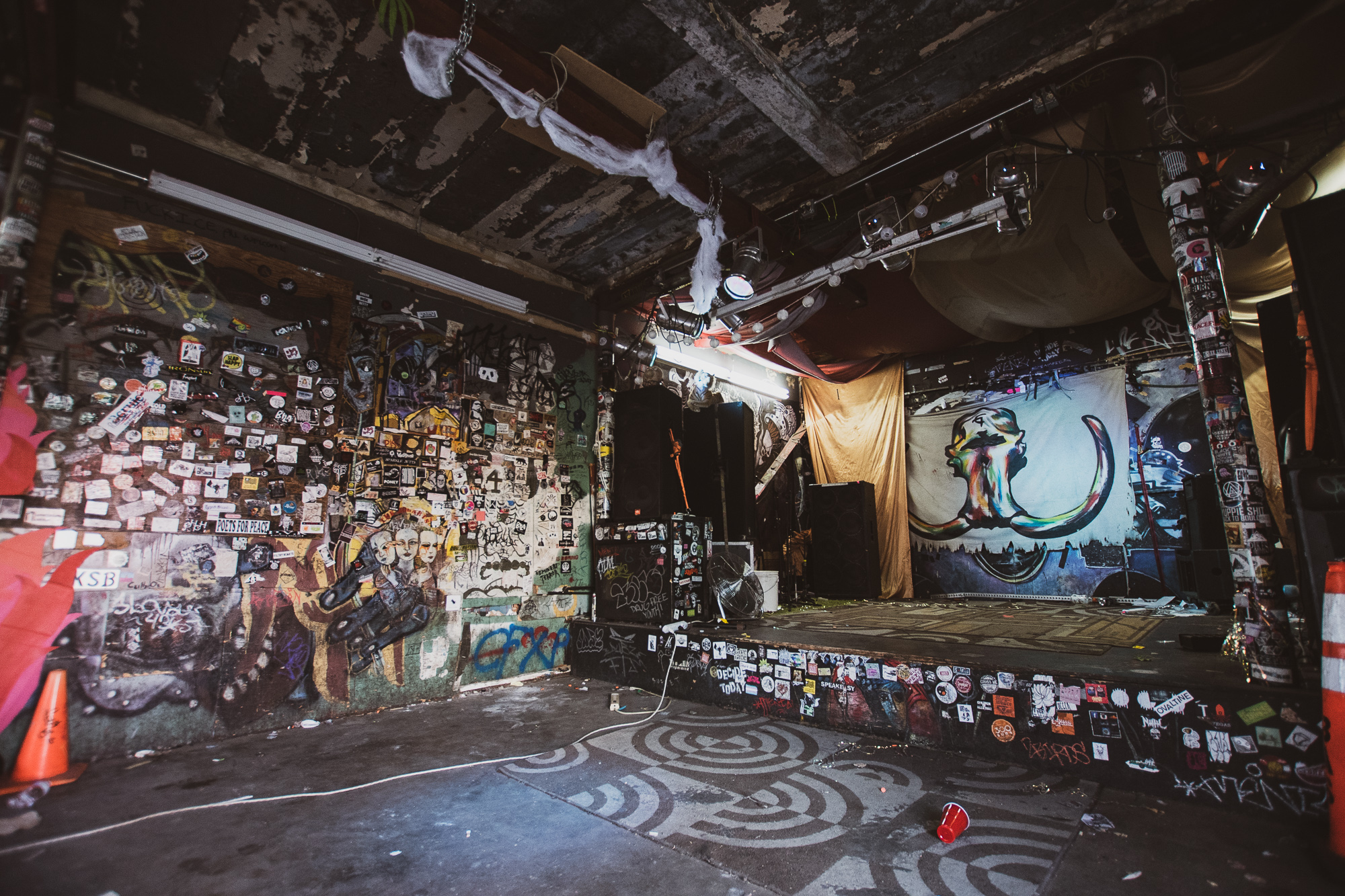 “My main goal is to keep 7C inclusive and diverse. I want 7C to be a safe space for everyone, a little oasis in this world, a place to express who you are with no judgment and a place where you have a support system,” she went on to say. Lucyfer has been involved at Seventh Circle since 2015, contributing to an integral part of what makes the space unique — its stacked team of volunteers running it.

Beginning its live music journey in 2005 under the name “Blast-O-Mat,” the location took up the name “Seventh Circle” in 2012. Hosting a variety of underground shows each week, the venue is (mostly) free of the confines of capitalism that traditional venues are chained to. “Seventh Circle is a space that exists outside of capitalism as much as we are able to. We have to pay rent and make repairs, but outside of that, it is all volunteer-run and the majority of the money we make each night goes to the bands,” volunteer Perry Froelich said. 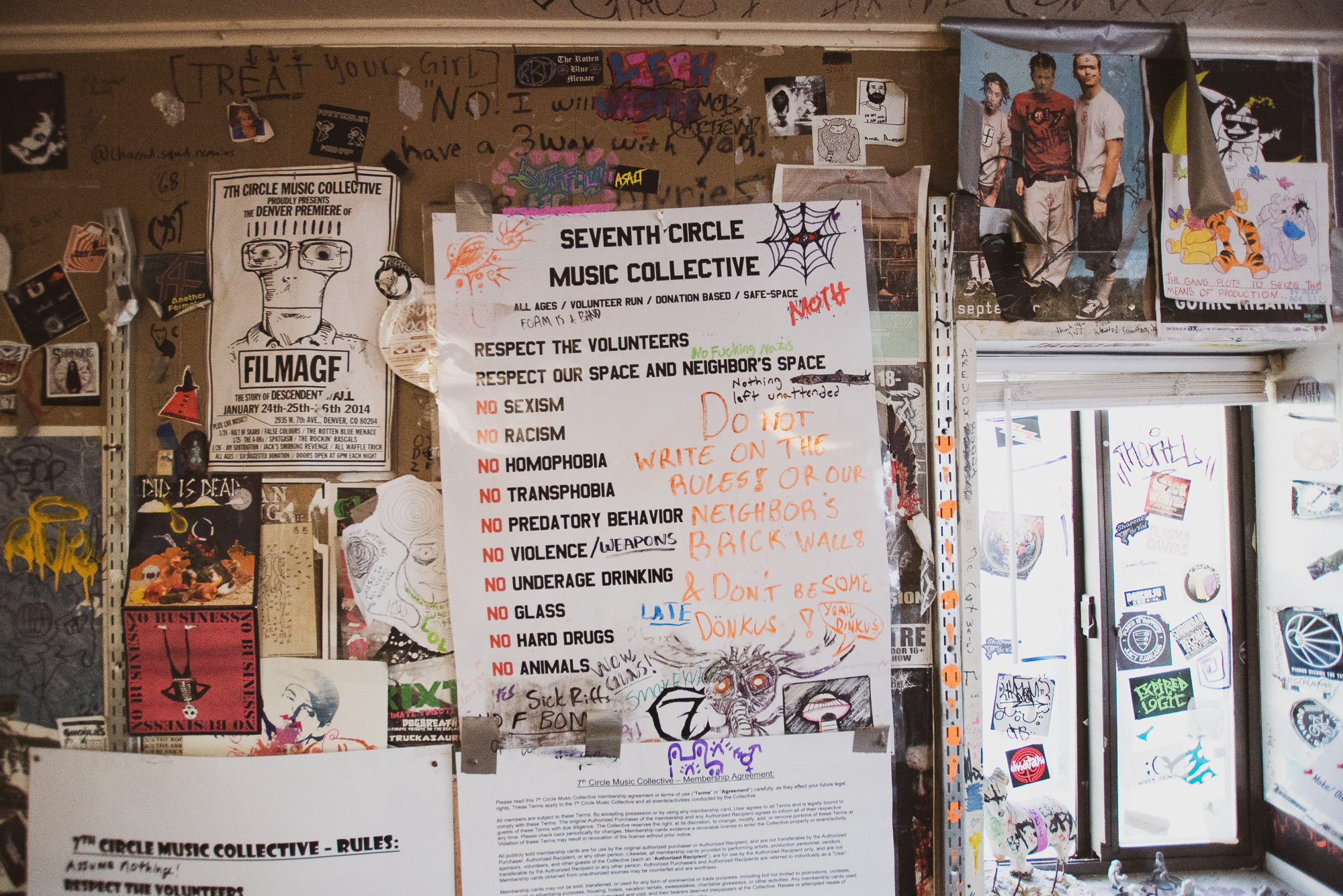 Froelich, who has been volunteering at Seventh Circle coming up on ten years this fall, expressed how the hierarchical structure of the venue makes way for a community that, at its core, is committed to the love of live music and the community surrounding Seventh Circle. Lucyfer resonated with Froelich’s assessment of how the space operated, commenting, “It is the one space that isn’t pressure-cooked by capitalism and just lets you exist freely.”

Since its conception in the early 2000s, Seventh Circle has operated as a collective run by volunteers. Long-time volunteer of the space, Aaron Saye, who began working with Seventh Circle at its start as Blast-O-Mat, described how he watched the demographic shift with the prevalent music scenes at the time: from classic, leather jacket-wearing, spiky-haired punks to hardcore rockers and electronic music enthusiasts, the venue has remained a space of inclusion for all people to enjoy music. 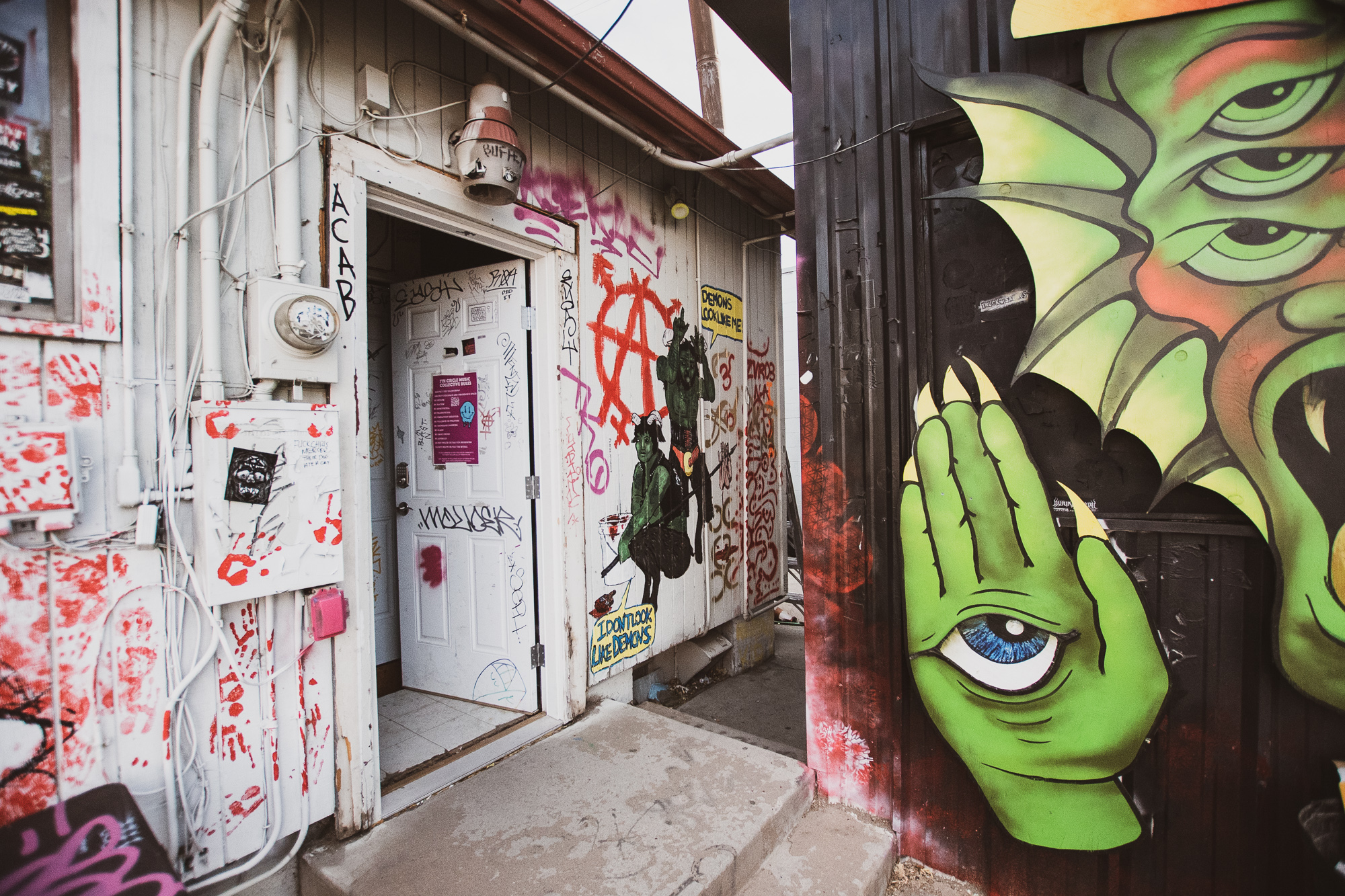 “We’re a place people connect with, a community hub and a safe space for anyone who needs it, as opposed to just a building people go to in order to see bands play — a building they have no connection with separately from the night the band they want to see is there,” Saye expressed.

Volunteers at the venue fill the roles of booking shows, filing the venue’s taxes, managing venue memberships and deciding on the many issues that need to be addressed as a democratic group. Carrying the weight of operating such a space comes with its challenges, but is made worth it by the value that the unique DIY space offers to the larger music scene in Denver. 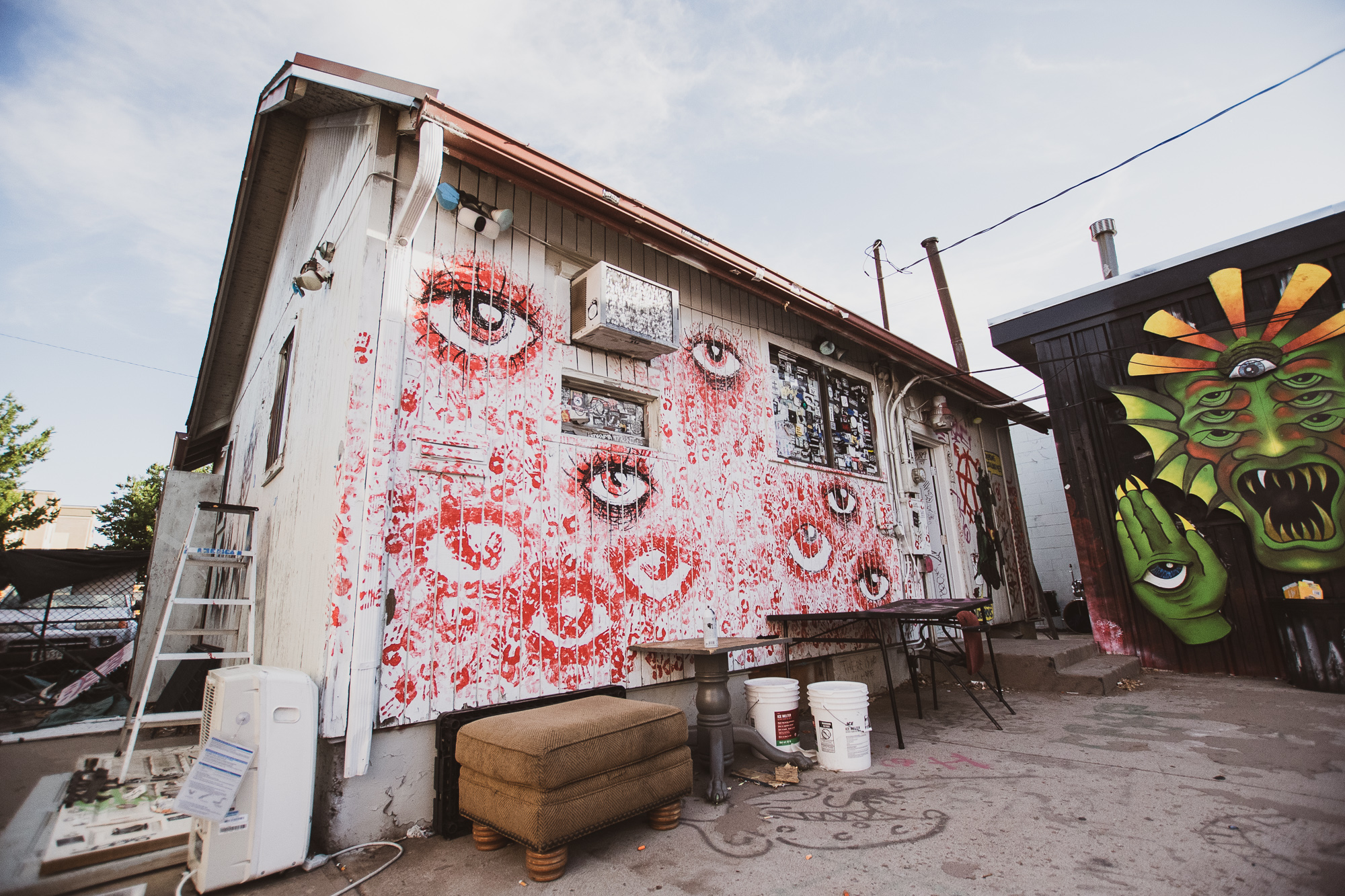 Faced with the many responsibilities that are placed on the shoulders of its volunteers, Froelich reflected on the root of what makes all the efforts put into Seventh Circle worthwhile. “We all like cool art, and do our best to add value to each other’s lives. Some people want to use it as a stepping stone, but for most of us, just being able to have a space like this is enough. Simply being enough is pretty cool.”

Seventh Circle hosts all-ages shows every week at their location at 2939 West 7th Avenue. It costs $5 for a yearly membership which grants access to any show. Donations are graciously accepted and encouraged with each attendance.

All photography by Roxanna Carrasco—