Bury Mia Build Upon The Foundation Of Local Pop-Punk

“Bury Mia started in a Mazda,” bassist Devin Martinez told 303 Magazine over beers at Ratio Beerworks. Martinez recalled that he was on his way to grab a bite to eat at Snarf’s before going to a concert with friend and fellow bandmate Justin O’Neal. At that time, Martinez and O’Neal were collaborating on hard rock tracks for a different local band, but they kept finding themselves writing pop-punk songs on the sidelines. By the band’s recollection, that was approximately seven years ago. Fast forward to now, and Bury Mia is a four-piece tour de force (having added drummer Marcus Allen-Hille and guitarist Noah Droddy to the mix) and one of the most veteran bands in the local pop-punk scene.

Today, pop-punk is in the midst of a revival, both in the local scene and nationally — and it isn’t uncommon to see a pop-punk band headlining a show that sees a lineup stacked with other bands in the same genre. Martinez describes today’s local pop-punk scene as a supportive family, and Bury Mia often plays with other local acts like Stray The Course, Losers Club and Dayshaper. But it wasn’t like that when Bury Mia got its start. In the melting pot of the local music scene, Bury Mia was an island of pop-punk in a sea of metal and electronics. 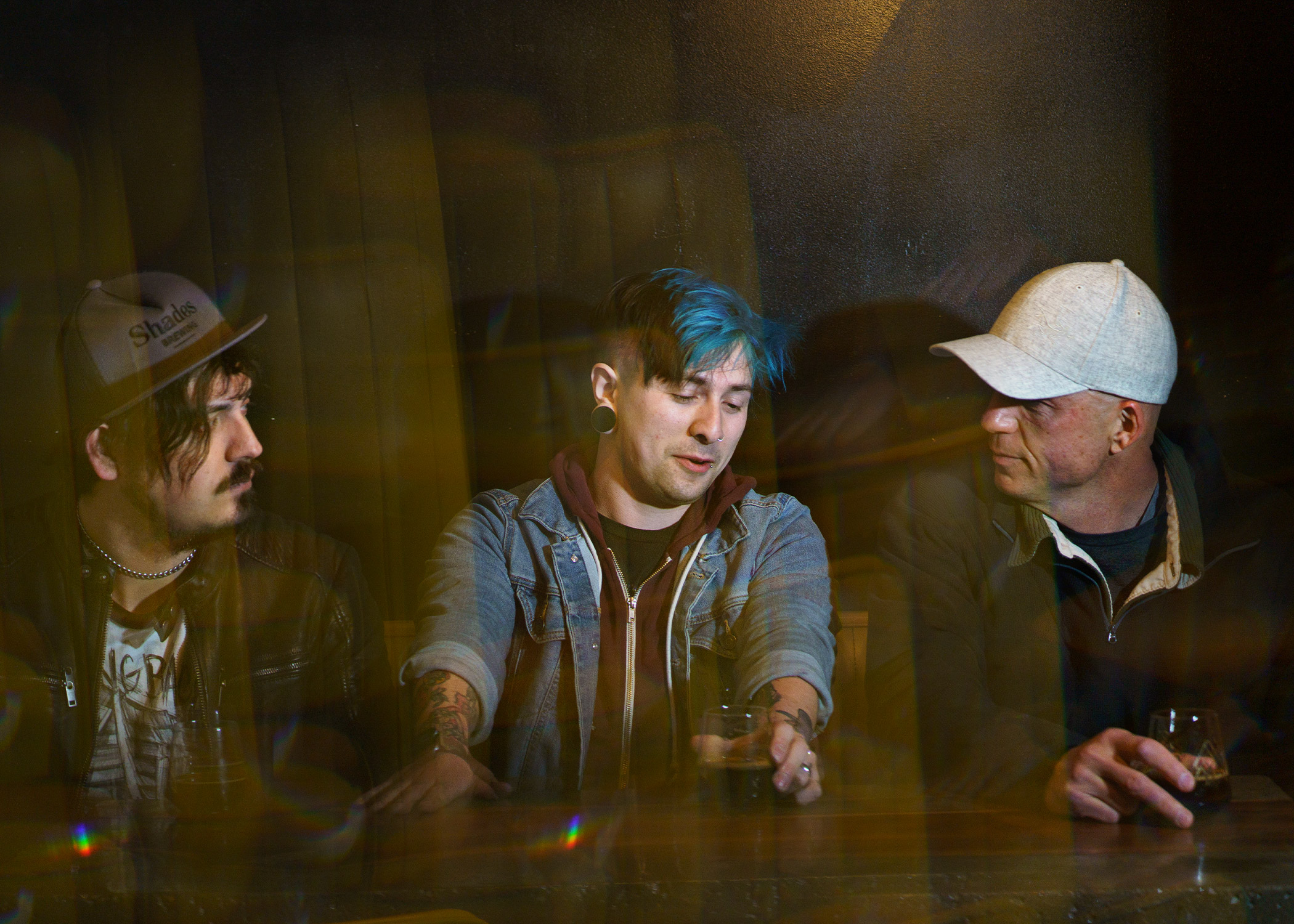 “When we were playing at first,” O’Neal recalled, “We didn’t have anyone to play with. We were playing with screaming bands, like really screaming bands, metal bands, sludge bands and really alt-rock [bands.]” Fortunately, with the exception of the occasional genre elitist, local fans were largely supportive of Bury Mia at these shows, even if it wasn’t the music they were there for. “So, I mean, respect to the metal community,” Martinez said. “They’ve been welcoming to us and they’ve helped us grow into what we are today. But it was hard to mesh genres like that.”

Often playing to crowds that weren’t in the venue for a pop-punk show, Bury Mia made it a habit to play hard and aggressive. But mostly, O’Neal said they just played for themselves. Without other like-minded acts waiting offstage to offer their musical expertise between sets, Bury Mia developed its sound largely without outside influence, leading to something that’s a near-perfect case study in the sounds of the golden era of pop-punk that Martinez and O’Neal grew up listening to.

This sound is easy to find on Bury Mia’s debut, the 2019 album …and Sleep It Off. That album was recorded in O’Neal’s basement with modest equipment. At the time, Allen-Hille was still very new to the band, still finding his bearings as he learned the already-written songs and laid down tracks for the record. Spending hours of dedicated time to capture the right sound and polish it to perfection, the final result was an album that shows Bury Mia’s pop-punk roots and influences.

“I feel like when I listen to the album as a fan, it feels really familiar in a way but it feels really fresh too. Pop-punk has gone through a reinvention, and it feels familiar yet really interesting and fresh to me. I don’t hear much like it. I really don’t,” said Allen-Hille.

“It seemed like we were meeting the best version of that song without being limited by just home recording equipment,” O’Neal said. But it wasn’t just the equipment and acoustics of a studio that made a difference. “There were a lot more couches accessible for me to sleep on, let’s start there,” Martinez laughed. And when they weren’t sleeping inside the studio, they worked with audio engineer Andrew Berlin to record and produce the album. With Berlin’s outside perspective and commitment to capturing the right sound — no matter how many takes it took — Bury Mia flourished. 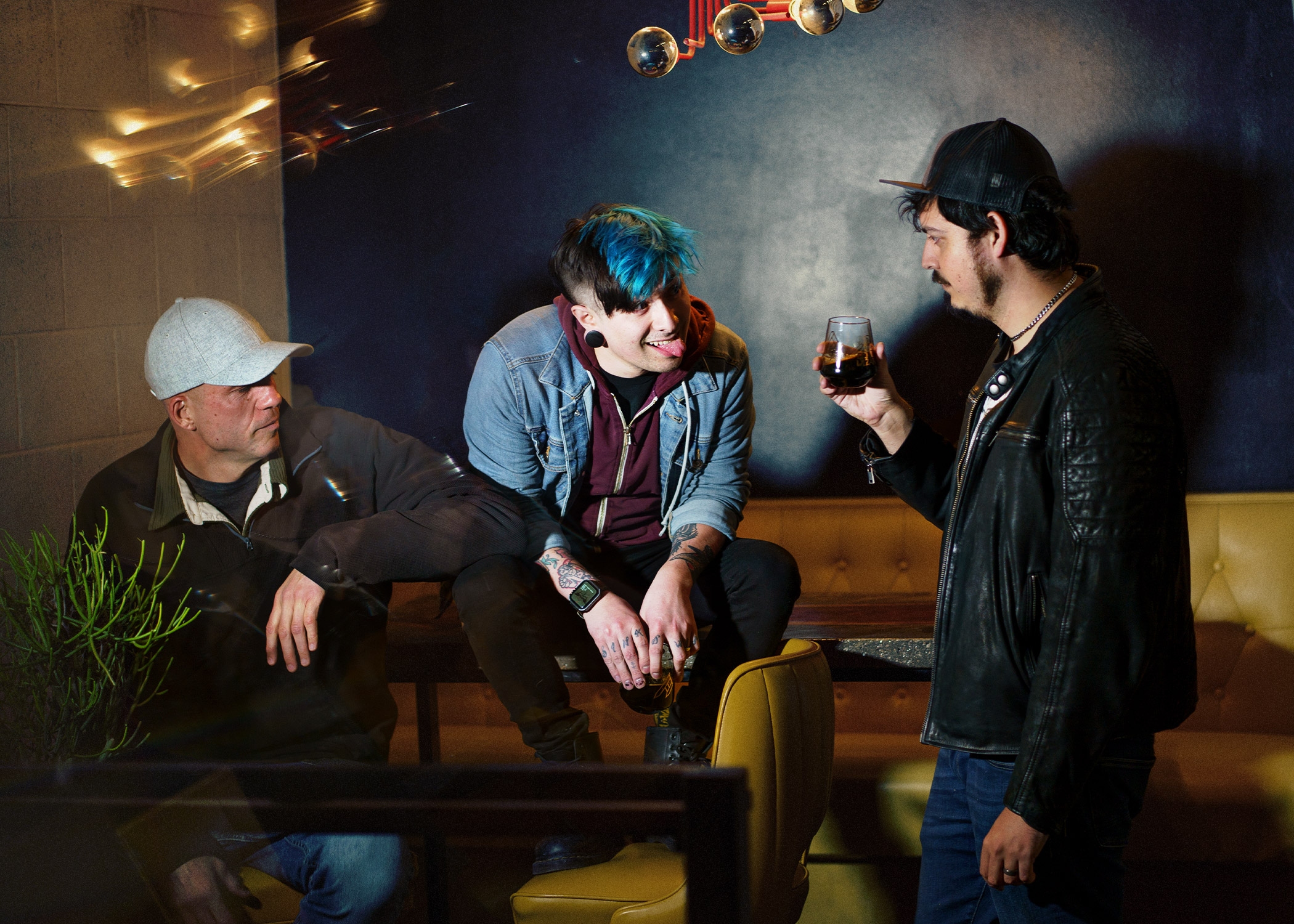 The album also has one other major difference that Bury Mia contributes to the defining sound of the album: Allen-Hille’s original drum contributions. “With this new album, I was able to be my best self and I was very much more comfortable with [everyone in the band] as people, the music, what I wanted to create and how I see myself within the band,” the drummer said. “Personality definitely comes out.”

“I think the drums is really what makes the album go to that next elevation. Because it’s Marcus being able to be Marcus, instead of him being handed a template of something. It’s literally the last puzzle piece we had to solve for what Bury Mia is today and what we’ve become. Plain and simple,” Martinez said.

This contribution is perhaps easier to see on Allen-Hille’s favorite track on the album, “Peanut Butter & Jealous.” The song was written after O’Neal sent Allen-Hille a text, asking him to “create a drumbeat [he’d] never heard before.” The drummer acquiesced, writing a relentless 250 bpm beat. O’Neal listened to the beat and used it as the basis for the song. “It’s the most fun to play on drums and it’s just fantastic,” Allen-Hille said. “It’s like three minutes of bliss for me.”

A couple of the songs on the album — “Past Eleven On A School Night” and “We Deeply Apologize For The Lack of Horn Section” — were pulled from the archives of Bury Mia’s early days as a band. And O’Neal admits that lyrically, they’re a bit more immature than some of the newer songs. “They’re a little bit more me trying to figure out my lyrical style and develop that,” O’Neal explained. “‘Past 11’ has a weird amount of references to the breakfast club. That’s just what most of it is.” 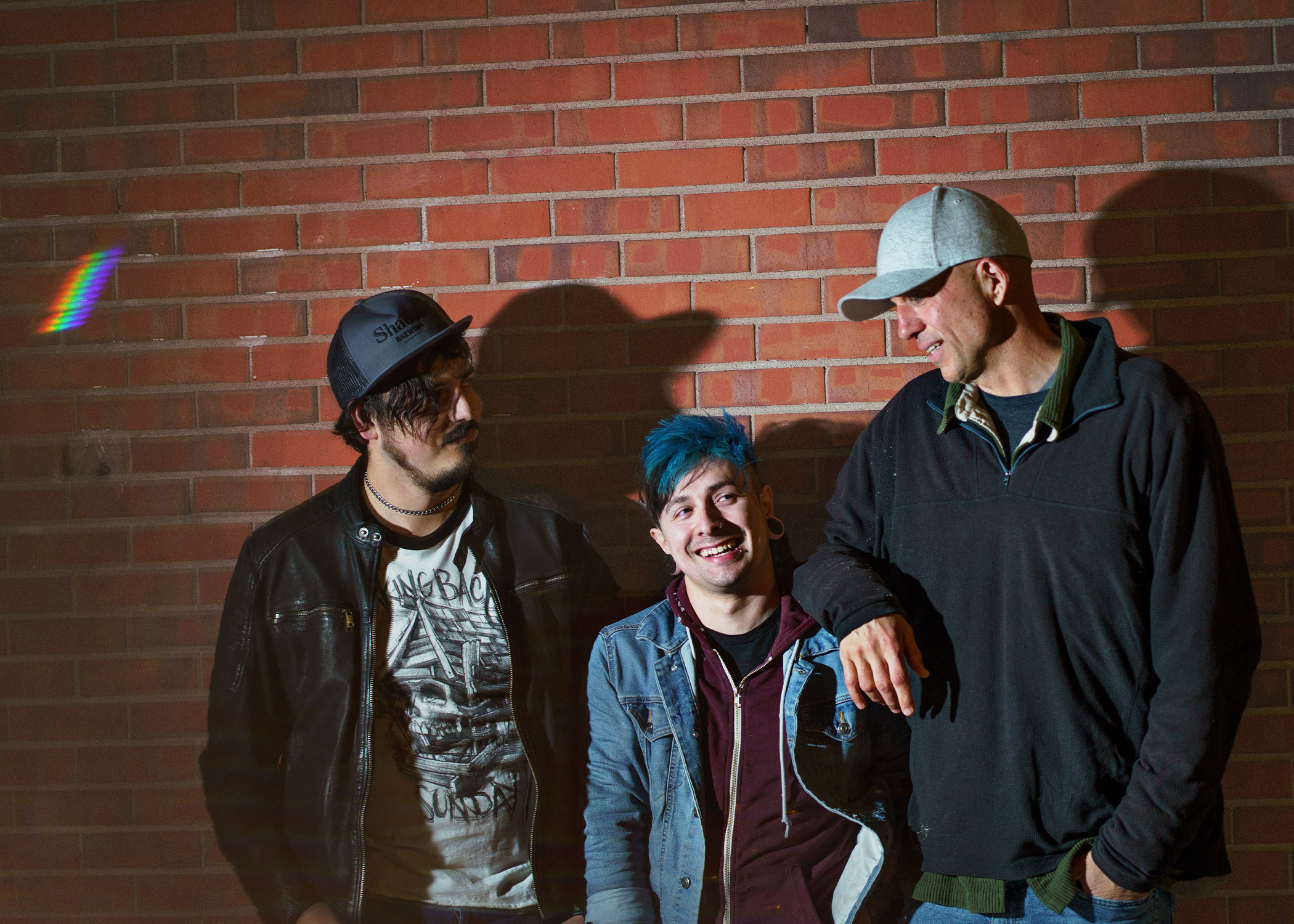 However, other than those two tracks, the lyrics found on  Somewhere Between Where We Are and Where We’ve Been capture the essence of modern-day life for the band, grappling with topics like heartbreak, fatherhood and even politics. Near the end of the album, “Seriously Though, Let’s Increase the Minimum Wage,” was inspired by the political turmoil of 2020. Originally a song about overthrowing the government, lyrics like “overthrow the government” were swapped for “overturn what’s been romanced,” after the January 6 attack on the capitol further escalated and polarized the country.

Bury Mia is growing up and maturing in both sound and lyrics. With the release of their latest album earlier this year, they’ve captured the exact sound they were chasing after. “When we went to the Blasting Room, it was our first chance to really do it,” O’Neal said of the new album’s polished sound. “So, now I feel like we get to evolve. We wanted to hit the sounds that I heard in 2001, and 2002, and crush it. And now we can experiment with it and go off.”

Veterans of the scene who have finally released the album they’ve always wanted to, it would be easy for Bury Mia to sit back and watch the newest wave of pop-punk taking over the local scene. Instead, Bury Mia wants to continue pushing pop-punk to the forefront of the local scene. “We did UMS this last year, which was amazing,” O’Neal explained. “I think we were the only pop-punk band there. But I would love to see — I literally put in our UMS submission — I want to see an entire pop-punk stage.” With no shortage of talent in the still-growing pop-punk scene, there’s always a chance that Bury Mia’s UMS dream will become a reality. 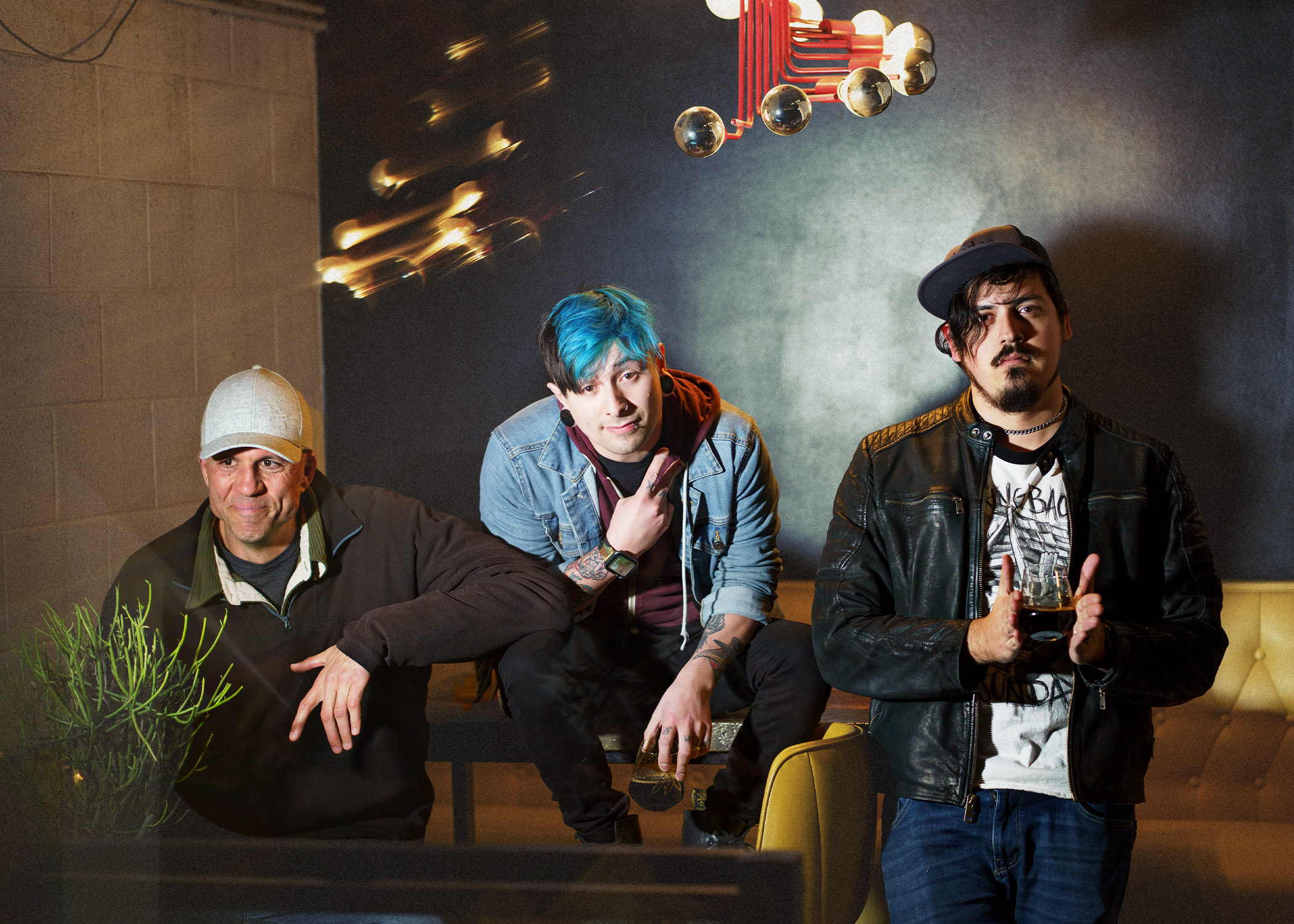 Bury Mia will celebrate the release of Somewhere Between Where We Are and Where We’ve Been with a show at The Fox Theater in Boulder on April 30. The concert will see Bury Mia headline, joined by local pop-punk openers Losers Club, Dayshaper and Slap Happy. Buy tickets for the show here.