Across all musical genres, creativity is at the forefront of innovation. There’s an endless pool of musical talent in all sectors of the world, but the best bass artists in the industry are right here in Denver. As a genre that’s defined by wonky creativity, it’s no surprise that DJs flock to Denver like moths to a light. As saturated as the Mile High City is with talented electronic superstars (Griz, Clozee and Big Gigantic, to name a few), it’s becoming increasingly difficult to stand out amongst the crowd. Somehow, Kyral x Banko is managing to do just that. And it all started with one word: snoitch. 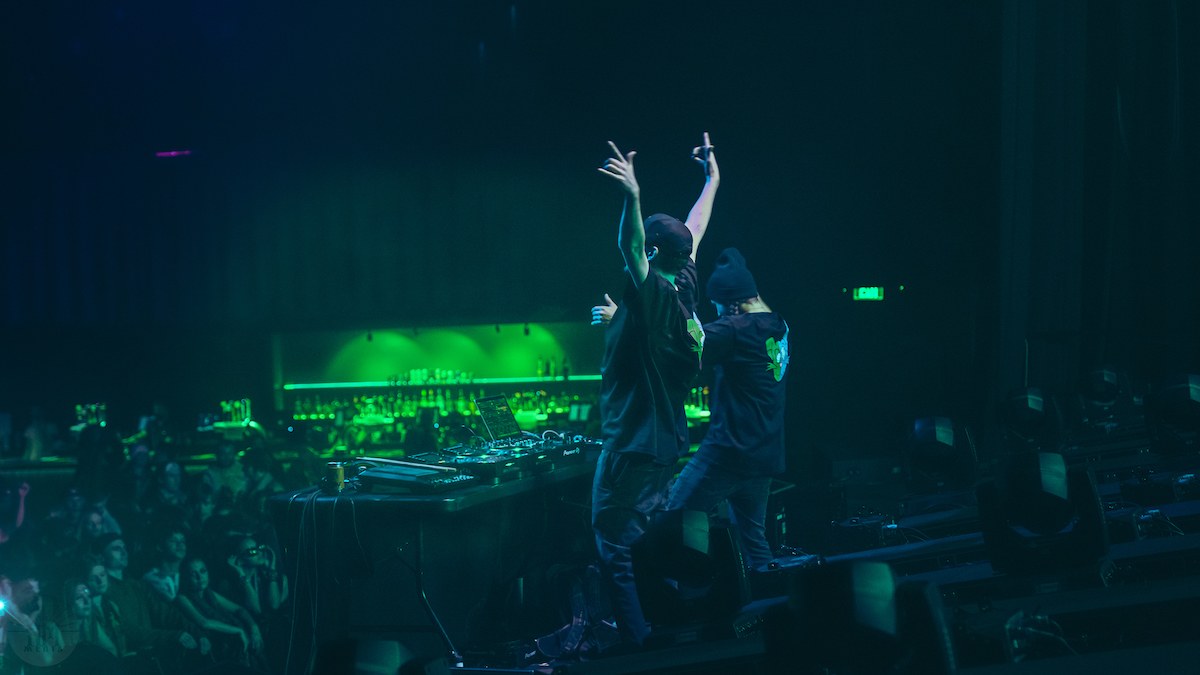 As you might have guessed, “snoitch” can’t be found in Webster’s dictionary, at least not yet. The word was originally fabricated in 2018 by Banko – real name Bennett Kohler – during a brainstorming session with Kyral – real name Collin Burdick– at Union Station. In a creative marketing effort, Kohler and Burdick were designing a matchbook that would function as their business card for years to come, as Kohler explained:

“We were getting these matchbooks because they’re the most functional business card ever. We ordered thousands of them and we’d just be throwing these out at our shows and leaving them on the tables and stuff. Either way, this was the second iteration of the matchbooks and we wanted to put some text on the inside. Collin was like, ‘What should it be?’ and I didn’t even have a second to consider a word other than what came out of my mouth at that given time – snoitch. Collin and I sat for a second and we just mutually agreed, that was it. So that’s how it started really, just blurting something out and being like, ‘Okay, where can we take this made-up word?’”

Over the years, Kyral x Banko has continued to expand on the snoitch, which has grown into its own universe and inspired their colorfully creative Snoitch EP. Snoitch is too abstract for a definitive meaning, and Kyral x Banko prefers to leave its interpretation up to their audience. Earlier this year, they took a poll, asking their audience what snoitch meant to them. The responses were just as creative and wonky as the word itself.

In a way, snoitch is a byproduct of Kyral x Banko’s move from Chicago to Denver, a decision they say changed the course of their sound and career, although it didn’t happen all at once.

Before their eventual move to Denver, Kyral x Banko was known for a much different sound rooted in trap aesthetics and hard-hitting drum beats. When they first started performing together during their college days at the University of Illinois, they had to cater to a much different crowd that mostly consisted of drunk college kids that were more concerned with the party than the music. Trap beats were the perfect background music.

The bars Kyral x Banko performed at around their university were dominated, and almost entirely run, by college kids. The partying came first. But when the crowd did want to tune into the DJs, they usually wanted to hear the hot electronic music of that time. All these elements came together to create a perfect environment for upcoming DJs and producers like Kyral x Banko to learn the ropes.

“The whole scene was run by [college] kids, from the door guy to up to the manager usually. That’s exactly why it was okay. If you’re in a big city, it’s not like that. You could go play a bar but you had to play what the crowd wanted and whatnot. But what we all wanted, as staff and bartenders and everything else, was the hot electronic music mixed with some top 40 stuff.” 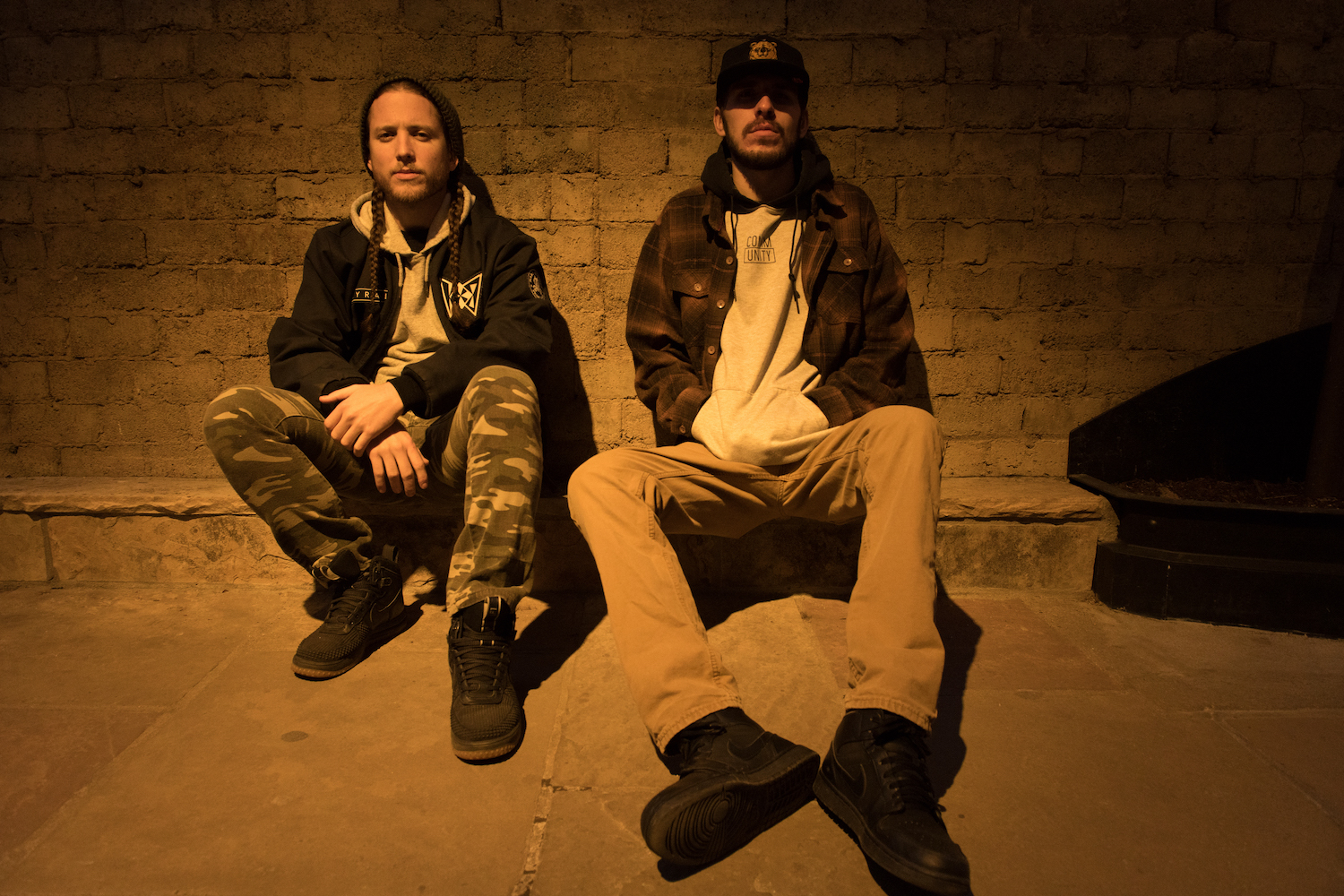 After a few years of performing, Kyral x Banko was ready to take their music to the next level. The problem was they weren’t really sure how to do that. Then Burdick went to 2017’s Sonic Bloom festival, an experience that effectively became the genesis of Kyral x Banko’s signature sound we know and love today.

“Being at Sonic Bloom, hearing all these sounds on proper systems and getting to feel them properly really helped me understand the difference between what trap music has to offer versus what you would call West Coast bass music… For me, it was like preparation meeting the opportunity of getting to hear all these really well-crafted sounds. At that moment, a very specific day of my life, everything clicked. I was like, ‘Oh my God, I know how they’re making this.’ It all started making sense to me. That was definitely the defining moment that everything changed.”

From that moment on, Kyral x Banko shifted their focus. Every time they sat down in the studio, they had a clear goal – to move people through sound, not hype.

With the proper vision, tools and experience, the snoitch was officially on. Kyral x Banko would spend the next few years growing their brand and diving into the Denver scene at places like the Black Box. By all accounts, things were going great for the duo. In just a few short years, they had a proper management team at Mindwarp Management, a newly refreshed creative drive and a fleshed-out home studio that provided a dedicated space to work on new music without limitations. Then COVID hit.

Thankfully, they managed to maintain their creative juices and utilized their free time during the lockdown to develop their distinct brand and sonic identity. The byproduct? Two EPs, a fully realized thematic concept for their graphic design and a release with the iconic WAKAAN record label. To be fair, they did have a little help from some psychedelic mushrooms, which were utilized for day-long creative brainstorming sessions that would eventually result in the cover art for the Snoitch EP and the Greenside / Beanside EP. When recalling the genesis of the Snoitchverse artistic concept, Burdick grinned with a sense of accomplishment.

“It takes a long time for a lot of artists to chisel out that unique brand aesthetic and what people incorporate with when they think about your brand. With Nike or Adidas, when you say those names, you think about certain things immediately. A lot of people spend forever working on that, you know? So we were like, all right, we already made up a word that no one else has ever said. Now let’s just run with it.” 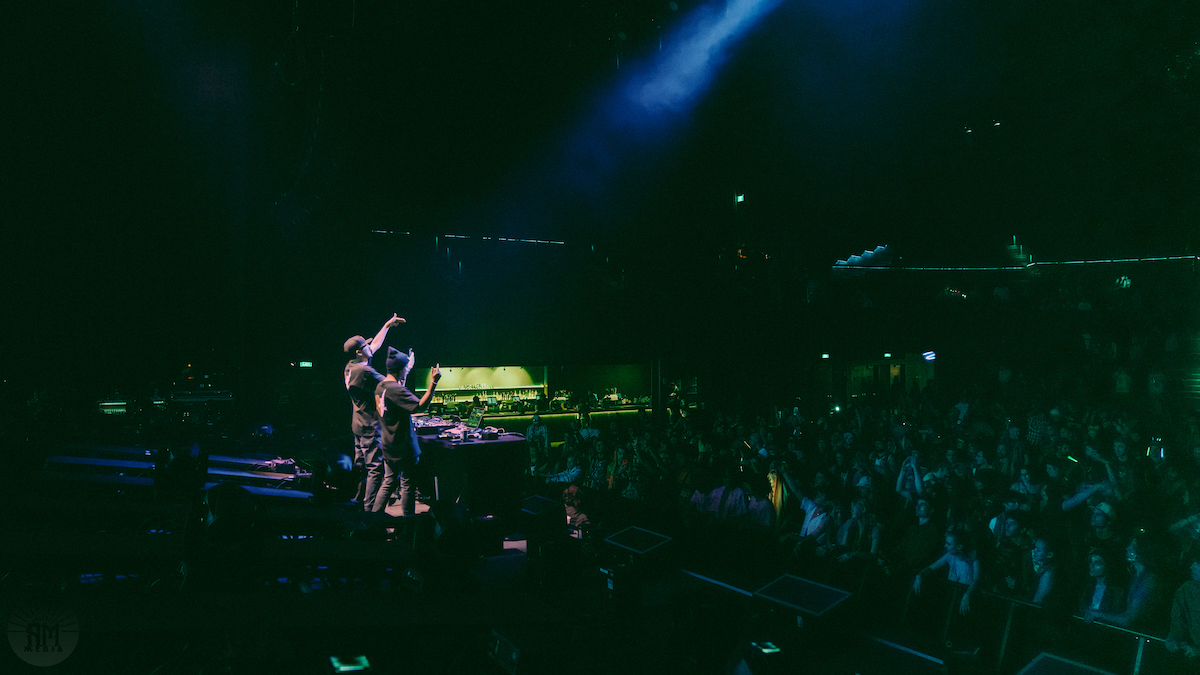 And that’s exactly what they did. Both the Snoitch EP and Greenside / Beanside EP, which came together during the lockdown, received critical acclaim, and for good reason. In just three songs, the Greenside / Beanside EP manages to exist in a world entirely on its own, filled with relentless creativity and a healthy mix of traditional dubstep-inspired bass music (“Greenside”) and the deeper, darker side of EDM (“Beanside (Joitle)”).

The sound of Greenside / Beanside is just as creative as the snoitch-inspired cover art accompanying the project. When I say “sound,” I’m referring to more than the music. From the opening moments, sound is used in inventive ways as a narrator named Gregorny guides the listeners through a psychedelic jungle under the ominous sounds of an oncoming thunderstorm and the chirps of anxious birds preparing for the electrifying cyclone to come.

“Greenside” continues as a category four hurricane of swirling bass and distorted wubs before venturing into the dark side of the Snoitchverse on “Beanside (Joitle).” Gregorny helps the listener cross over into the other dimension before deep frequencies and ominous snoitches overload the senses.

Following “Beanside,” the electronic duo gives the listener some room to breathe and come down from the penthouse of experimental freeform bass music with the closing track “Lost Space.” Existing somewhere between “Greenside”’s traditional dubstep sound and the ominous outer-world of “Beanside (Joitle),” “Lost Space” acts as electronic elevator music that guides the listener back to the lobby of reality. 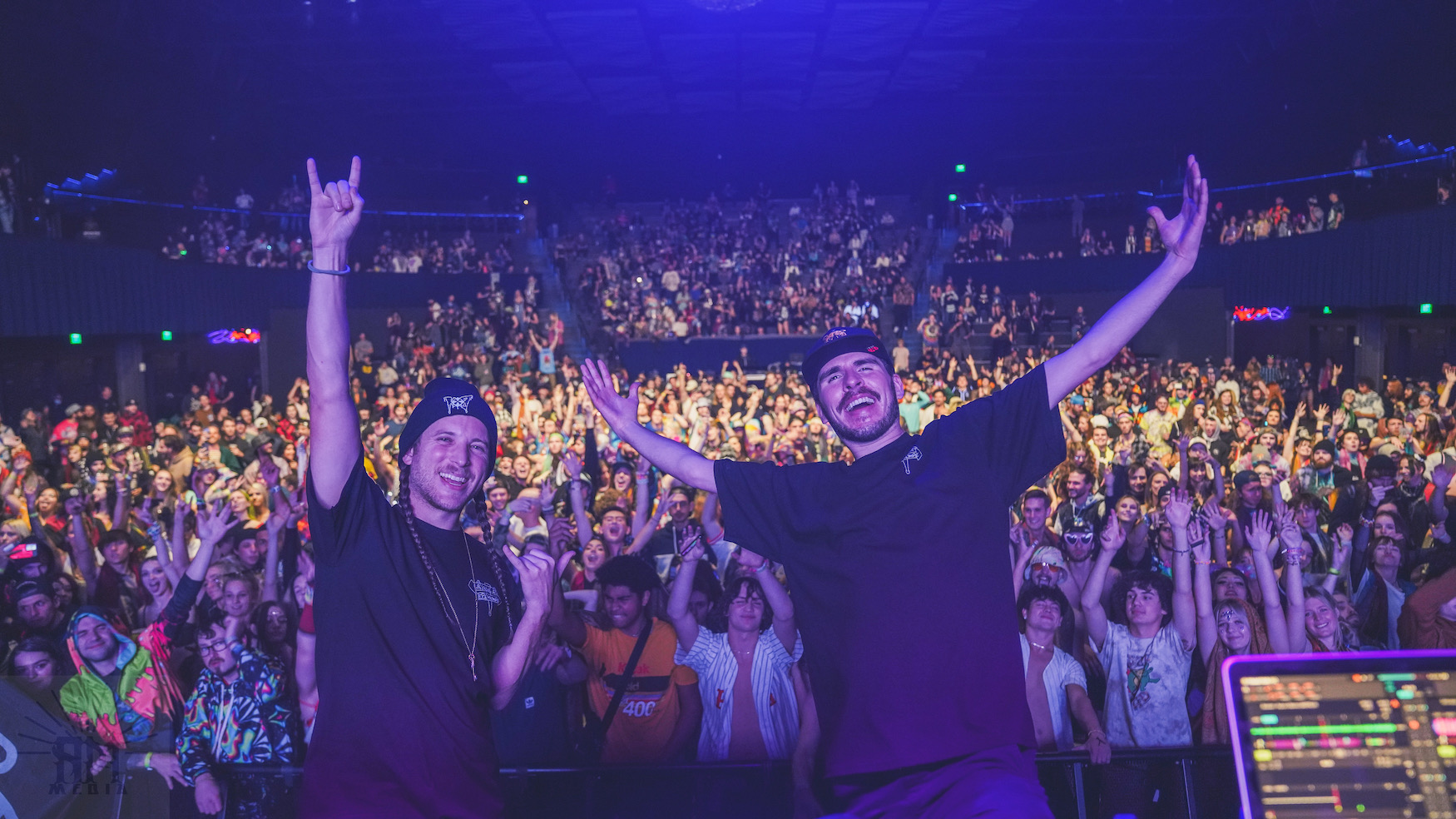 Released on the Denver-based Morflo Records label, Greenside / Beanside fits in perfectly in Denver’s ever-expanding experimental-bass scene. While the duo has enjoyed working with Morflo Records, which boasts impressive releases from freeform bass artists including Denver’s own rising star Mersiv, they also hope to continue building a relationship with the iconic WAKAAN label, who released Kyral x Banko’s Snoitch EP back in March.

“The whole WAKAAN team is like a family. Not all labels are like that. Not even close actually. It’s a really healthy community of artists. [Releasing with WAKAAN] is not necessarily the easiest thing to do, which makes it sort of special. I’m not saying that it’s this mega exclusive club that you have to have an invite to, but it is an accomplishment. it’s really nice to have that label that will have your first release and then be like, where do we go from here? Instead of being like, thanks for releasing this with us, talk to you maybe never. You know?”

The future is promising for Kyral x Banko, who recently opened up for WAKAAN creator Liquid Stranger at the Mission Ballroom. Their talents are obviously getting noticed, and their fanbase is growing every day. Their music is refreshing and their artistic vision is clear. Whatever the snoitch is, Kyral x Banko has it. Then again, isn’t the snoitch in all of us?