Chow Down on Dumplings and Noodles at Newly-Opened YumCha

When people want to taste authenticity, they have a picture of what it should look like. People imagine Abuelitas pressing homemade tortillas in a “tortilladora” or a fifth-generation Italian stewing a sauce from a recipe written in cursive on a tattered-yellowing piece of paper. These images have people believing that there are certain ways to achieve flavor from around the world. Denver-based ChoLon Restaurant Concepts achieved this same soul through a new spot, YumCha.

Iowa-raised Lon Symensma’s passport proves his intense integration in Asian culture helped garner his repertoire in recreating it. Thereby, fans appreciate his tradition and fusion at ChoLon and now the same ideas come forth at his renovated Cho77. He boils the concept down to showcasing noodles and dumplings — common choices for diners at ChoLon. With that, the Mile High City welcomes YumCha to the trifecta of ChoLon concepts rounding the 16th St and Blake corner. 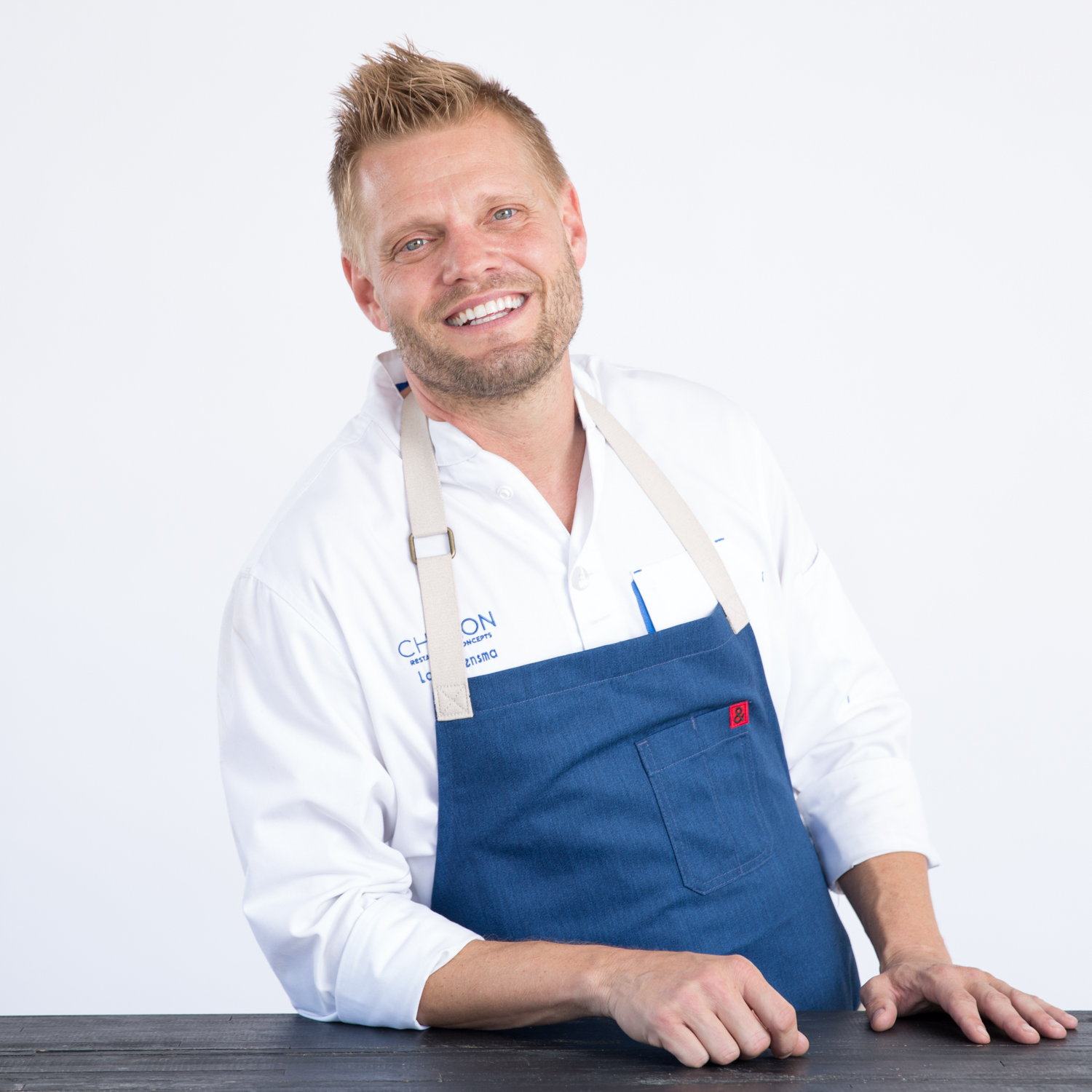 “Something I learned from my travels is that food is universal. Similar to language, there are similarities throughout each. Finding them, that’s the fun part,” Symensma said.

His early integration with food gave him the ability to see it from pasture to plate as he grew up on a farm. Seeing his mother pickle garden favorites to keep as the end of the growing season grew near in his mind paralleled the pickled elements adding acidity to different dishes he discovered. They served a purpose — they were needed in their own ways.

Although he fantasized about exploring the world of food, his Anthony Bourdain adventure didn’t begin until being assigned to open Jean-Georges Vongerichten’s Shanghai location. Vongerichten collected diaries of what he tasted and where to find them that Symensma followed like a roadmap. He slurped noodles, toured dumplings of all sorts — pillowy bao buns, thinly sealed xiao long bao (soup dumplings), sleekly steamed and freshly fried. His French-classic degree and time in Europe didn’t leave as big of an imprint.

“This spot recreates the fun, light-hearted memories of being in the bustling noodle shops. With a name like YumCha, it’ll be hard not to say it with a smile,” Symensma said.

READ: 11 Best Spots for Dumplings In And Around Denver 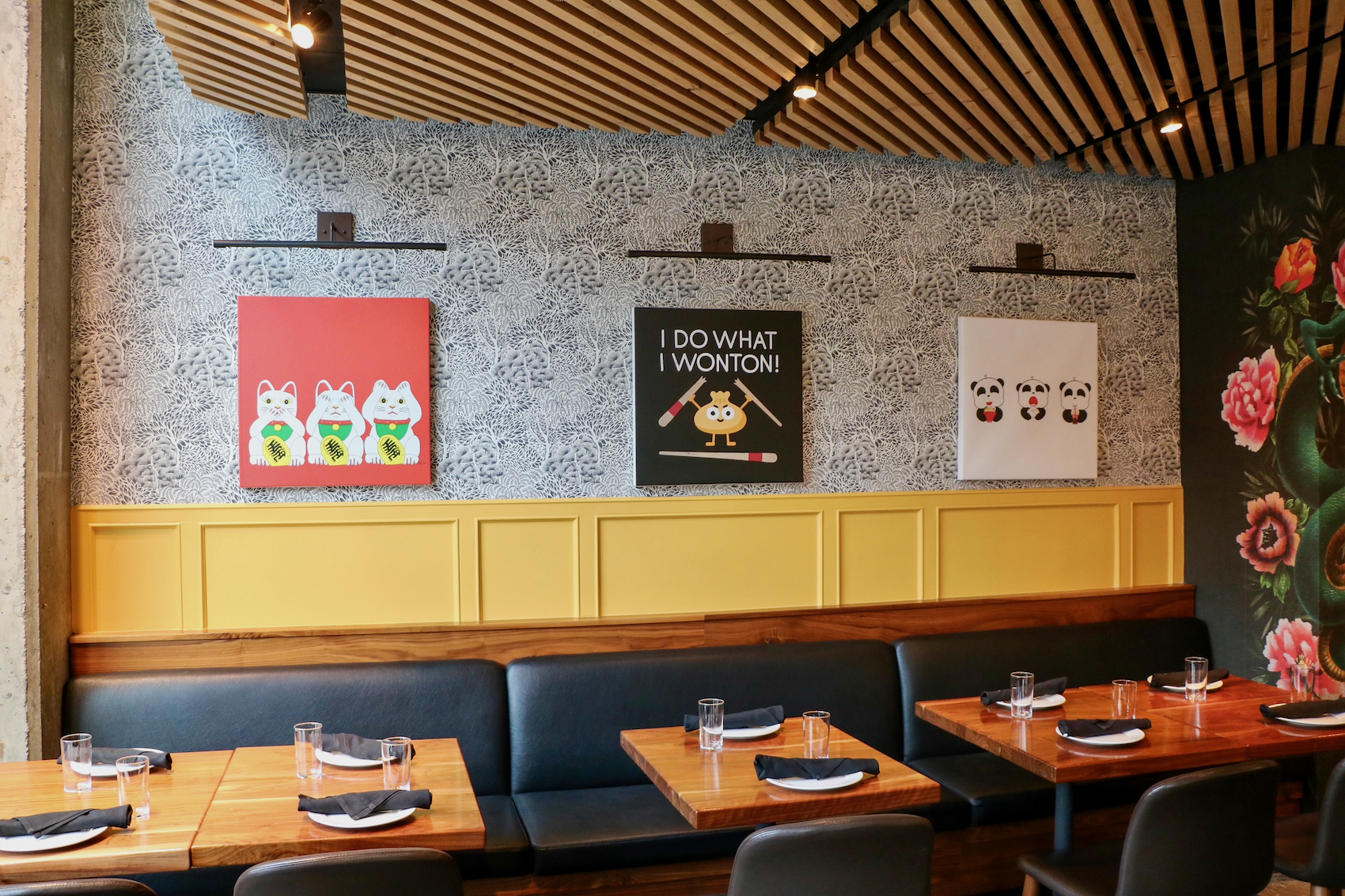 The name is only the start. With pictures of a noodle-eating sloth and a cartoon panda taking a sip of boba adorning the walls, the space was meant to be inviting. Symensma’s love for creativity interplays with his technique-driven background. After years of flying his dear friend and dumpling savant Michelle Xiao to hold a 101 on dumplings to train his staff, she finally migrated to the Mile High City for this new concept. Her work at Buddakan in NYC showed Symensma that she’s the best dumpling wrapper around.

“We want everyone to find themselves here and that is reflected in our dishes. We hope people come because they love dumplings. But sure enough, someone that loves American classics can get behind our cheeseburger shumai,” Symensma said.

Denverites can’t quit devouring the french onion soup stuffed inside ChoLon’s dumpling wrap. Another soup dumpling graces this menu as well. Symensma remains in the Southeast Asian region with a similar aromatic soup sitting inside the traditional Xia Long Bao. His Vietnamese Pho Soup Dumplings ($12) maintain the lemongrass and ginger notes it should; beef meatballs hide inside as they often warrant searches amidst the vermicelli when traditionally plated.

The crystal dumpling skin tradition caresses shrimp and the translucent nature takes on the pink color instead. Here, the Shiitake Mushroom Crystal Dumplings ($12) are his vegetarian option with earthiness rather than the saltiness from the ocean. The shrimp rather integrates into an Asian rendition of a french croquette — Pom Pom Shrimp ($8). Also known as fried shrimp balls, these have the panko flakey crunchy crust but a tender interior.

After ordering the BBQ Bacon Cheeseburger, the appearance of little bite-sized pieces may seem jarring, but that’s just Symensma and Xiao’s ability to incorporate grandiose flavors in small packages. Essentially, the BBQ Bacon Cheeseburger Shumai ($12) is a one-biter — it should leave folks wondering if they assembled the tiniest slider in town and sealed it in a wonton wrapper.

The menu does exceed its two namesake items of dumplings and noodles. One of the chef’s favorites includes the Peking Duck Scallion Flatbread ($11). Usually, it’s a prized and pricey dish when the entire bird is presented on the table and then sliced for guests to make their own pancakes or buns with the accouterments. However, this offer is a tasty start — Symensma’s twist on the more common chicken pesto flatbread. 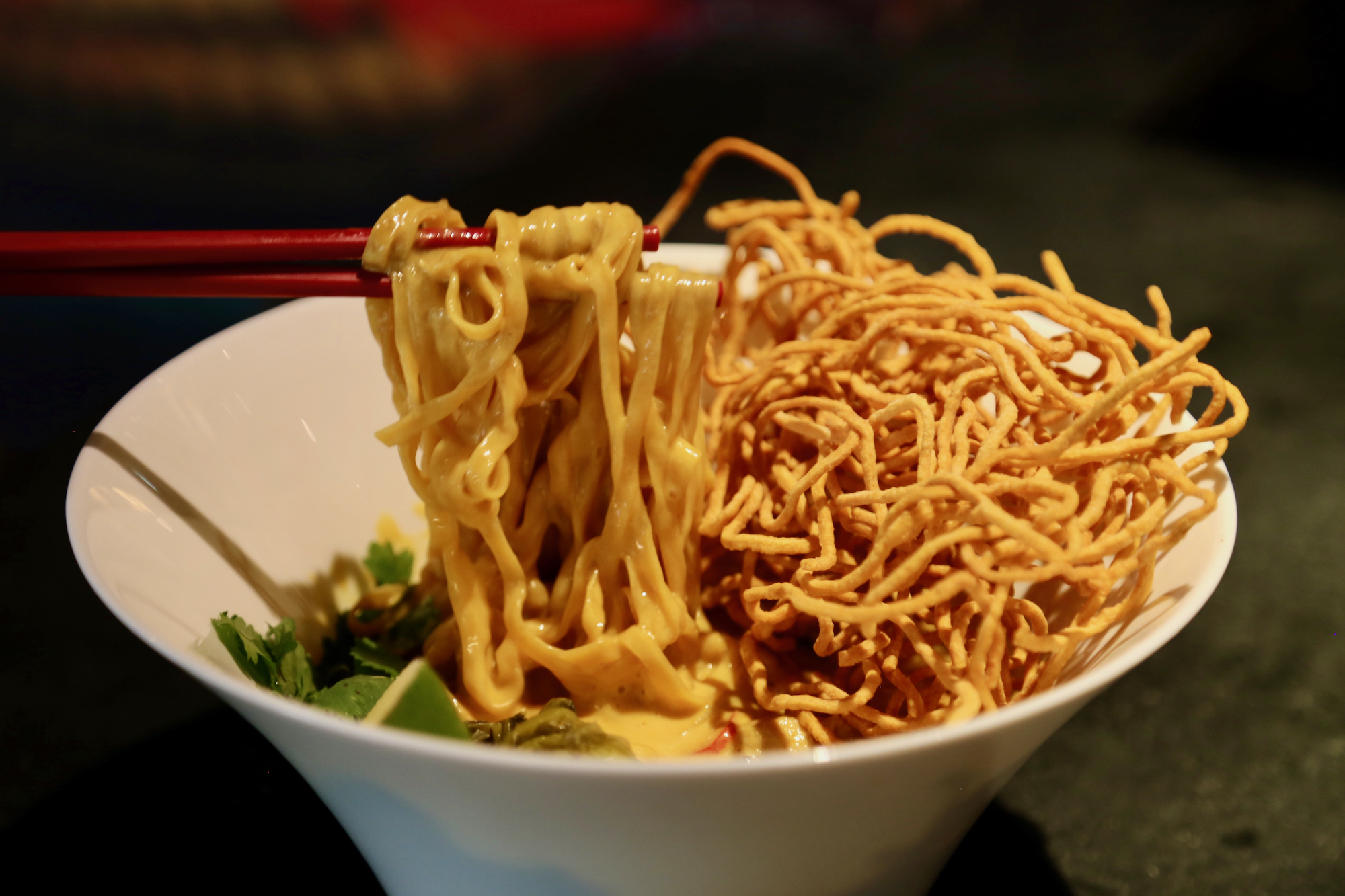 As the colder weather creeps closer, so does the desire for a steaming bowl of something — soup, sticky rice, ramen or noodles. The Chiang Mai Chicken Curry ($14) extracts the comfort of chicken noodle soup and imparts an extra layer of warmth from curry spices. The duo of textures amplifies the experience with slurp-able noodles lingering beneath the surface and a ring of crispy fried egg noodles as well.

The menu is thoughtfully small, surely not because Symensma ran out of ideas — he constantly thinks about what flavor he can transform into his favorite food groups: dumplings and noodles. Instead, he awaits growth and perfecting his current favorites.

“Downtown was a ghost town for too long so we hope YumCha can get people excited about the food scene that has still been steadily working and growing. Living in Denver for over 10 years, I witnessed this scene progress in many ways. Yet, it grows more every day,” Symensma said.

Well, it seems like the final piece is politely rolling up some sleeves and slurping the steaming bowl of noodles set at the table. At least, that’s what Symensa can be found doing.