A5 Reinvents the Denver Steakhouse Scene

As 2022 inches closer, one of Denver’s newest restaurants, A5 Steakhouse, is embracing a fresh start by offering a new aesthetic to the traditional steakhouse. Folks may remember the dramatic and sleek atmosphere of Morin, its predecessor. The oceanic, eye-catching chandelier has been properly replaced with the greenery associated with an endless pasture. A5’s cheeky name is a nod to their prize possession: steak. But, understanding the definition a bit more accurately encompasses their wholeness and authenticity when it comes to food.

A steak that achieves A5 status goes beyond organic approval. The bonafide bovine receives the royal treatment; their caretakers ensure there’s no stress in their lives. The effect? A steak intertwining the muscle and fat to produce a lovely marbling — similar to an artistic rock formation. This tender care has heartbrokenly been lost in the mass production farm industry. This wholesomeness fits as the entire A5 team believes that building a sustainable and ethical restaurant is the primary concern. 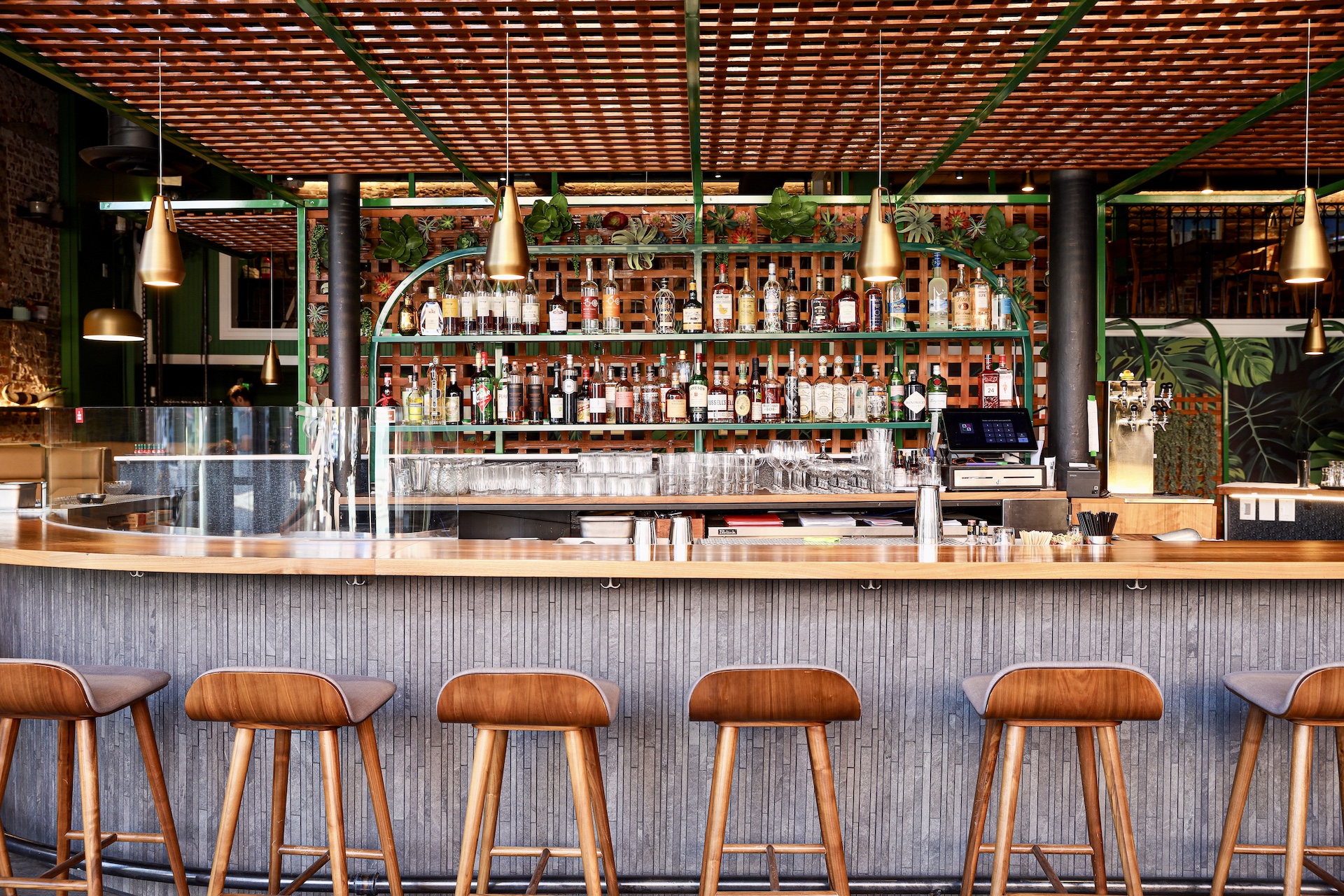 A5 bar. Photo by Eric Donzella.

Chef Max MacKissock leads his team by the principles of seasonality, traceability and creativity. Director of hospitality Kevin Burke affirmed this when he said, “When we vet our purveyor, we are deliberate in knowing as much information about their background and the product as possible. We want to know everything about the grapes that condense into the wine our somme’s pour. We talk to farmers and ranchers from all over the state to ensure we know every step of how our ingredients arrive here.” It ultimately stems from invigorating ethical producers. This system ensures the sustainability of these economies.

Diners immediately immerse themselves in a funky alternative to the average steakhouse. This comes across with their version of dogs playing poker as portraits of cows in suits and the vibrant green leaf wallpaper. A5 sheds the intimidating steakhouse atmosphere to welcome those on their way to Ball Arena, friends catching up while sitting at the bar and even the business moguls finding their next home base.

In terms of menu, it blurs the line between steakhouse classics and a new wave of contemporary cuisine. Even though truffle fries make the menu at most places, Chef MacKissock provides the same salty fix but with a Canadian favorite instead — Poutine ($15). His thick steak fries at the bottom of the cast iron plate hold up his version of poutine layered on top. He cooks down a chicken confit to get a deep, rich flavored gravy, then layers the shreds of chicken on top as well. The earthiness of sage rekindles the feeling of a holiday roast. However, the special touch comes from the sprinkling of chicken chicharrones amidst the mountain of potato, chicken and cheese curds. A steak house version of nachos if you will. 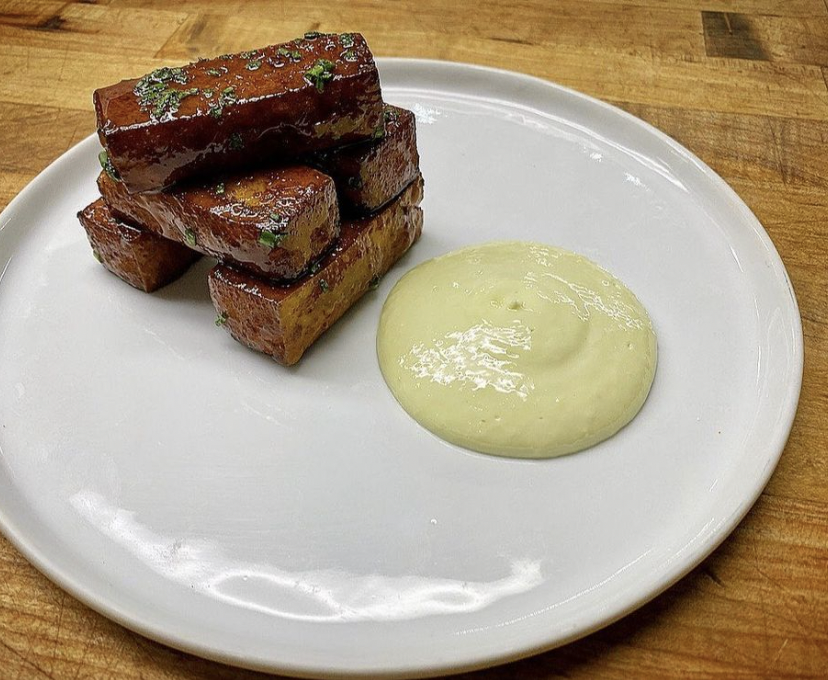 Chickpea Fries. Photo courtesy of A5.

For a lighter but still unique alternative to a french fry, the Chickpea Fries ($12) are another gateway to the mind of MacKissock. These fries begin as a batter and frying each rectangle allows the smooth interior to remain while the outside gains texture. Each glossy fry could be mistaken for a tangy barbecue rib upon first glance but what appears like polenta remains on the inside.

With their assortment of steak preparations, it’s unsurprising that one had to be presented raw. Their Beef Tartare Katsu Sando ($18) arrives in the traditional manner of being sliced down the middle and presented with the inside exposed. Little pearls of minced steak surround the soft boiled quail egg which honestly appears more like the tamago sando. Regardless, the milk bread receive a toast to counter act the softness of the dish and provides the elements of a tartare but bypassing the struggle of constructing one’s own crostini. 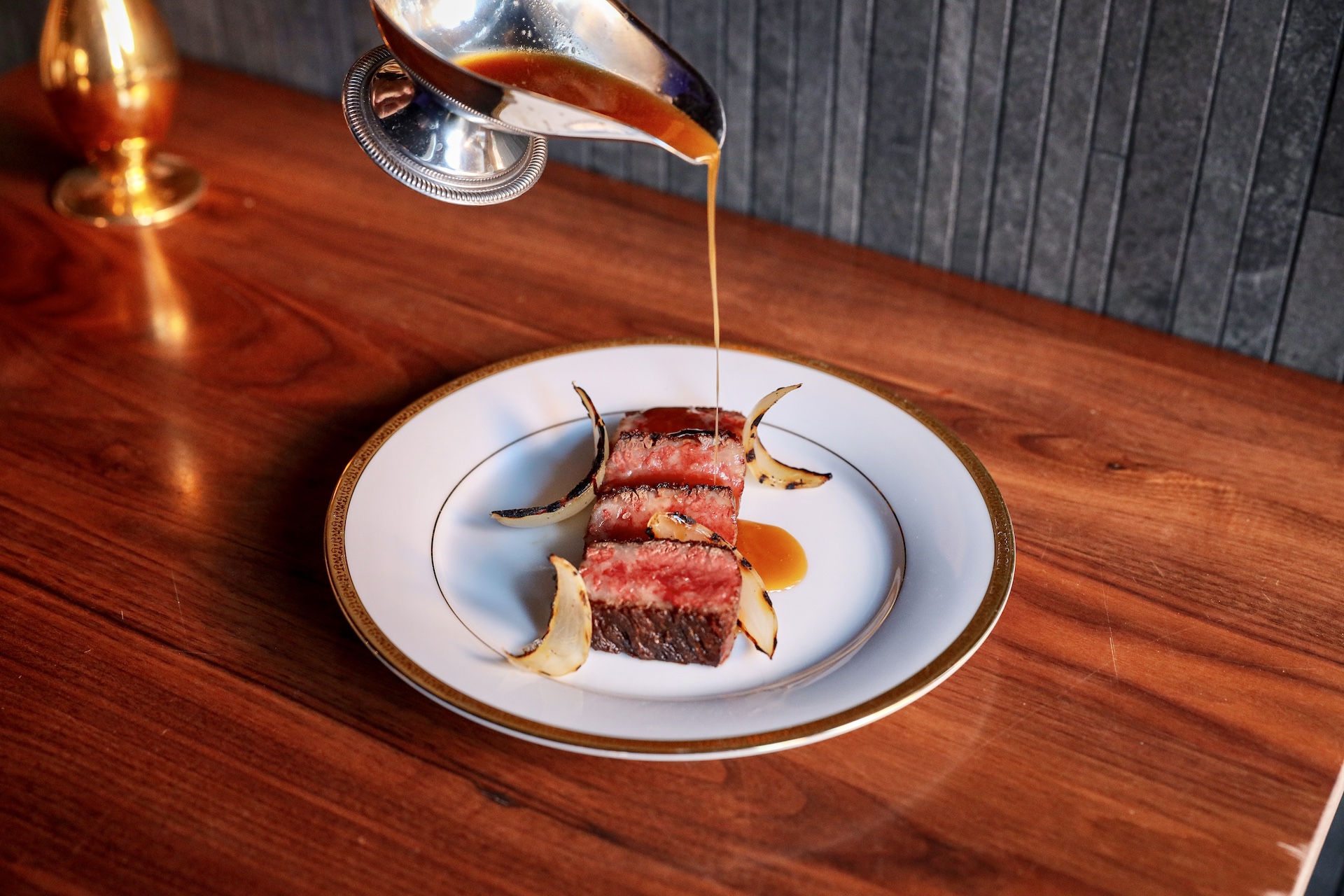 A5’s steak section is thorough and provides a tour of the entire animal beyond the most known cuts. The chef challenges himself to present less popular cuts like the Denver Steak ($34), often a flank, and the Bavette ($34) in a way that patrons swoon over. Depending on who’s at the table, the bone in the 30 oz Strip ($94) could be the right move along with a mix of sides. But folks wanting to honor the A5 name will lean towards the Japanese A5 Wagyu (MP). The other cuts have the American stamp of approval with a lineage of the farm it’s from. However, care put into A5 Japanese Waygu is a true art form. Chef MacKissock keeps it a vibrant magenta in the middle but ensures the marbled fat throughout melts into the meat to help tenderize each bite. 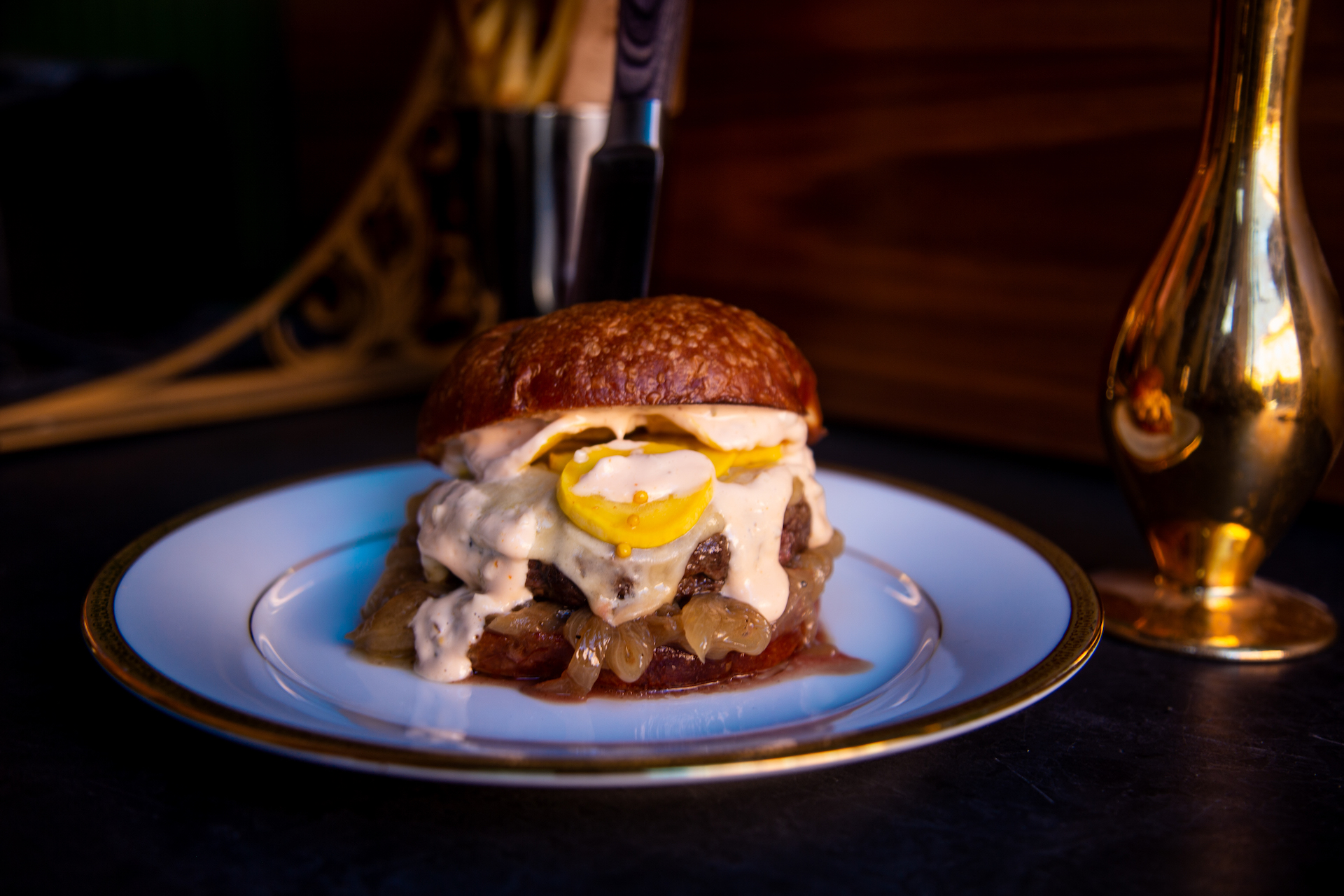 A5 Burger. Photo By Kayla Jones.

Other highlights that find the eyes reading the menu beyond the steak section include a minimalist A5 Burger ($18) that maximizes the attention of diners when the 4 oz patty arrives cuddled in the brioche bun. Among guilty pleasure a juicy burger with the gooey American cheese must make the list and to revamp that nostalgia, A5 used butterkase cheese. Loosely sounding like butter cheese in German is actually a pretty accurate description of its character. The ease in melting allows for it to emulate a juicy lucy, almost where the grand review of cheese occurs after the first bite. 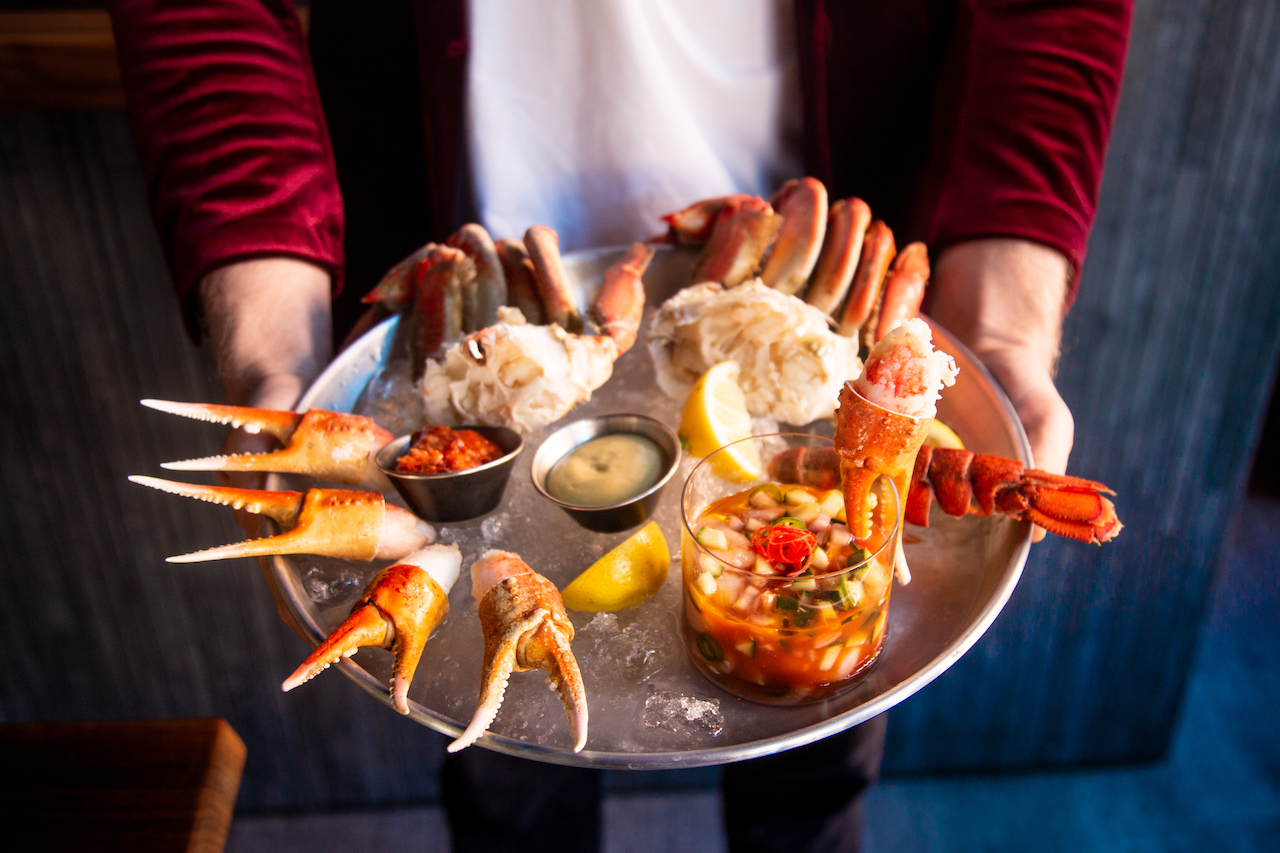 The name A5 could easily deter anyone interested in other offerings besides beef, but that’s where Ben Wolven comes in. The shores of Maine and his dad brought the humble oyster into his life early on — and even out here in Denver it still defines him. The Oyster Wulff pop-up began at the outside bar of Mister Oso with Wolven, an ice chest of oysters, some fresh horseradish and a shucker. Since then, his hustle has him at Forget Me Not in Cherry Creek where fans can try their hands at a number of his flown-in provisions. His connection with The Culinary Creative Group and their coinciding ideologies of food sourcing landed this matrimony. Oysters were a must for more than the steakhouse aesthetic — rather these altruistic sea creatives leave each spot they lived better than they arrived which embodies A5’s agenda.

“I source straight from the farmers. They’re my friends, my family and I know from seeing it first-hand that they are treating their oysters as they should,” said Wolven. “It’s about supporting the people that are working to make sure our food is prepared right. It’s just the right thing to do.” 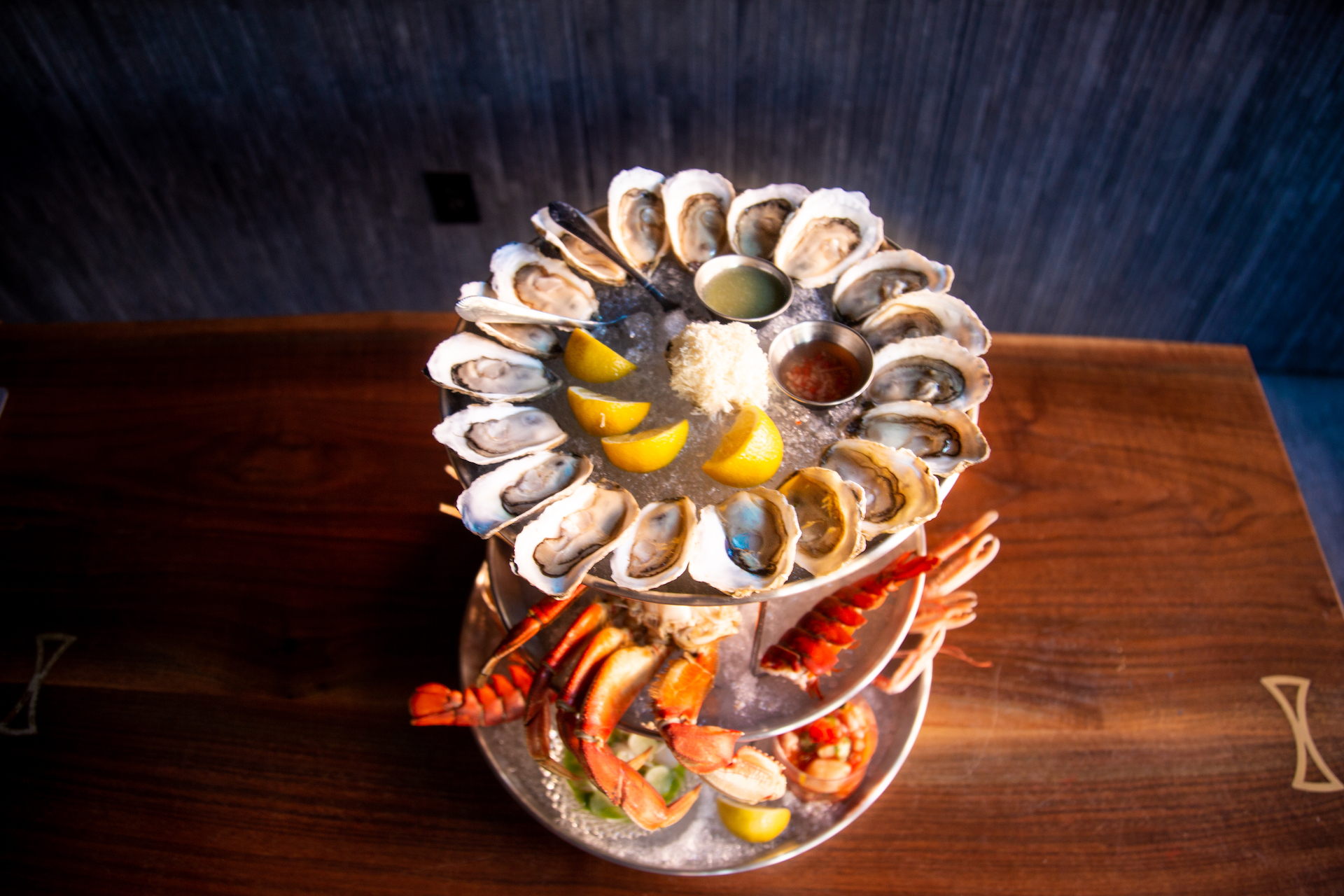 Wolven’s following stems from each beautiful full-bellied oyster he shucks, but at A5 he imparts a lot more of the sea onto the menu. The elegance of an ice tower adorned with crustaceans galore is now added to the menu.

The level of care and detail orientation makes replication hard, although this is the hope for the future of eating. Restauranteurs, chefs and customers alike see the lineage of the food. Therefore, they can have a relationship with the food chain they live among. A5 achieves the first step in this process and continues to fortify the small business, artisanal side of the culinary realm — and gives Denver another axis to inject from.