Halloween 2020 looked unlike any other. With a pandemic in full effect and an imminent (and perhaps scarier) election on the horizon, Halloween as we knew it, was doomed from the start. The circumstances however did not stop immersive band, Itchy-O.  The group, known for their thunderous and all-encompassing performances seemed to double down on their spectacle, inviting their audience into an apocalyptic circus of epic proportions. A socially distanced drive-in experience by design, Itchy-O’s annual ritualistic performance dubbed, Hallowmass, extended far beyond the confines of a car door and seeped something sinister bringing some much-needed afterlife to the spooky season. 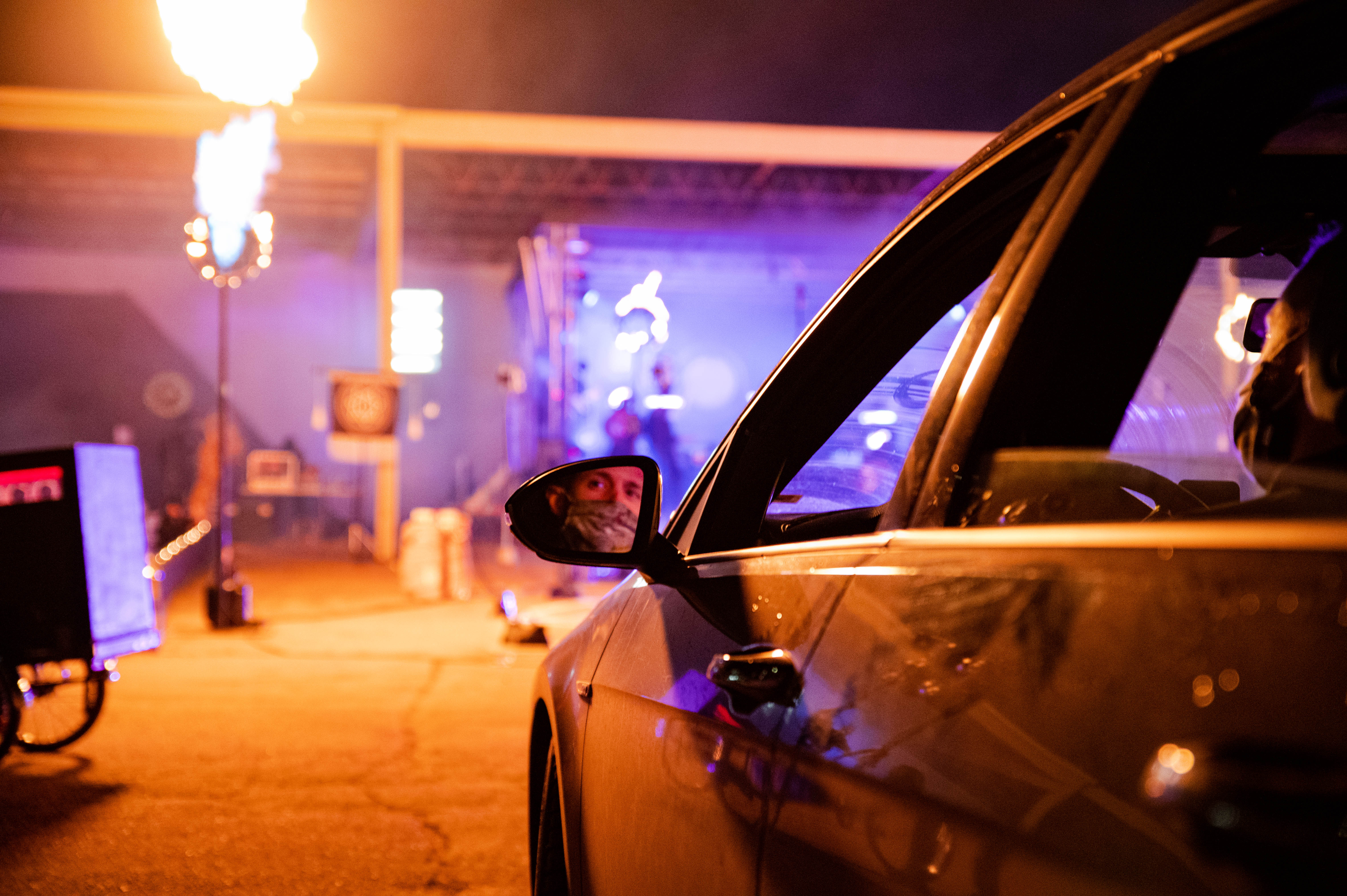 Much like the group’s SYPHERLOT sound bath performance in August of this year, Itchy- O, set the stage for their otherworldly performance in a large backlot in RiNo. This time however, the festivities were held at the Former New Tech Machinery across cracking asphalt marked with a pentagram-esque emblem and a shipping bay converted into a shrine of sorts. A stage sat in the back of the expanse — a perch for the group’s notorious drumline to set aflame. Cars full of eager fans were shepherded in and arranged in rows like pews bearing witness to an unholy sermon.  A grotesque snarl of distorted soundwaves enveloped the grounds and poured out through the FM-transmitters into each vehicle and dark cloaked figured began to spill out from the shadows.

The ceremony started in slow succession — the figures in the shadows traced the bodies of cars, popping up against windows and hoods. Some rode elaborate bicycles and other sprayed white clouds of smoke from “radioactive” backpacks as the propulsion of the drums picked up into a rousing pace. The music fell into a fever dream of noise — gnashing guitars collided with the mania of drums and the squeals and crunch of synthesizers as the dark figures grew more and more invasive. A thurible filled with a fragrant incense filled the air and wafted out over the cars. In the shipping bay, the dark figures kindled a large fire as sparks flew into the ether. As the music would swell, infernos shot into the sky. 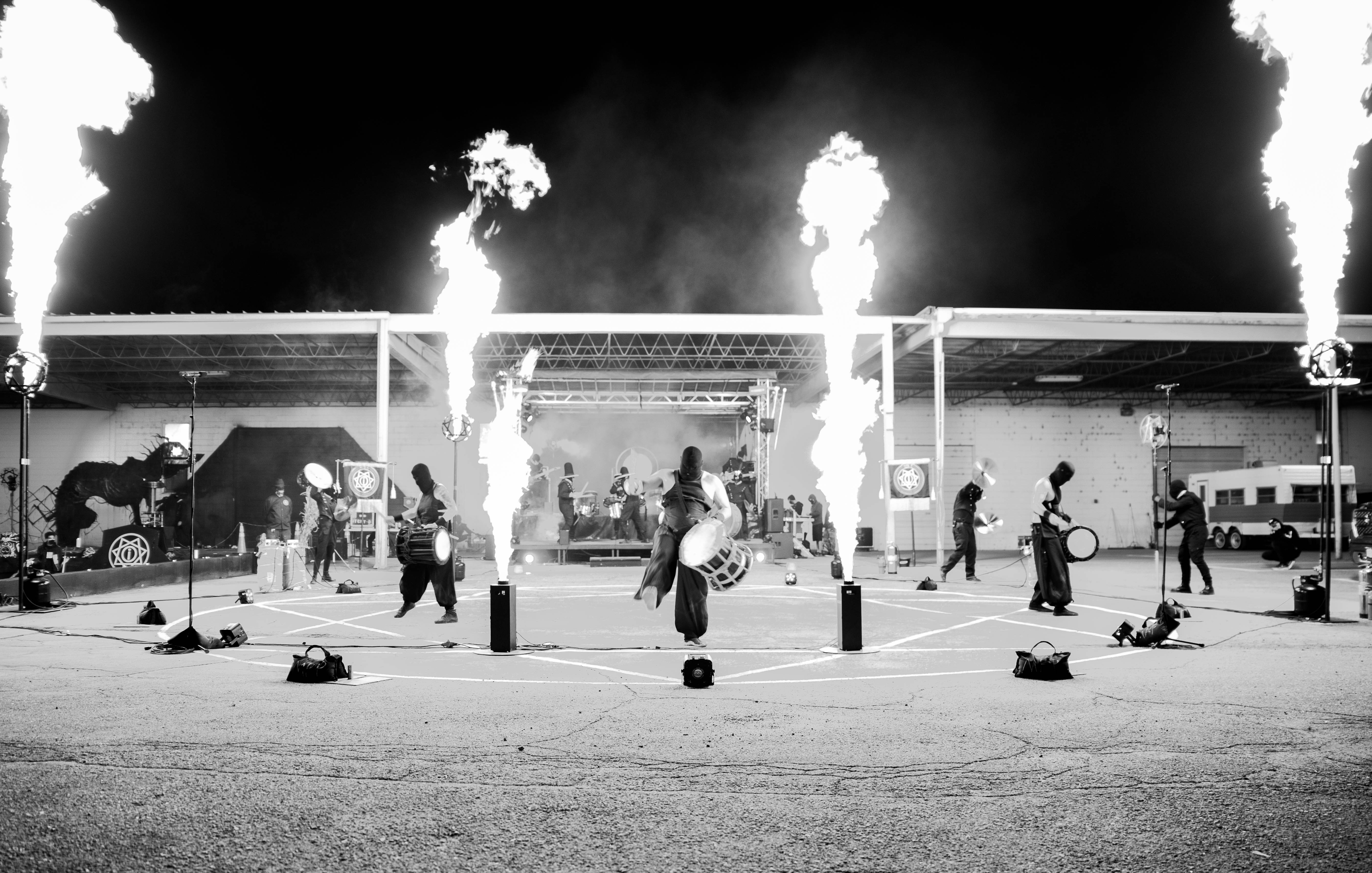 Itchy-O’s hellscape was a playground of nightmares. Between the dark figures roaming the grounds in packs, the drums unloading rounds in a rhythmic onslaught and the flames bursting into the atmosphere, Itchy- O took the crowd down a straight descent into Hallow’s Eve as it was meant to be experienced — freaky and in the flesh. As unsettling as the affair was, it brought a much-needed bit of Halloween magic out of the grave and unshakeably into our heads. Even though it wasn’t their typical “Hallowmass” antics, Itchy- O still manage to baptize Denver is in their dark decadence.

Itchy-O will return for a second performance on Friday and Saturday, November 6 and 7 at the Former New Tech Machinery (1300 40th Street, Denver 80205). Tickets are available here.