Portraiture is a deeply human form of art. Unlike Abstract Expressionism or Impressionism, portraiture relies solely on the ability of an artist to represent a human face. Not all portraiture should or needs to be photorealistic, but there is no doubt that every good portrait artist has a way with showing facial expression — whether it’s just with a single drawn eyebrow line or a thousand strokes of shading and gradient.

Inside ILA Gallery — a brand new art gallery owned by Fa’al Ali that opened just three days before COVID-19 led to the shut down of local businesses — two artists showcase their own distinctive brands of portraiture. Curated by Lorenzo Talcott, Twenty Toes showcases the work of Denver-based artist Casey Kawaguchi and Albuquerque-based artist Jodie Herrera, side-by-side. In reality, it’s not so much a group show as it is a complementary one, where each artists’ work stands on its own — hence the name. 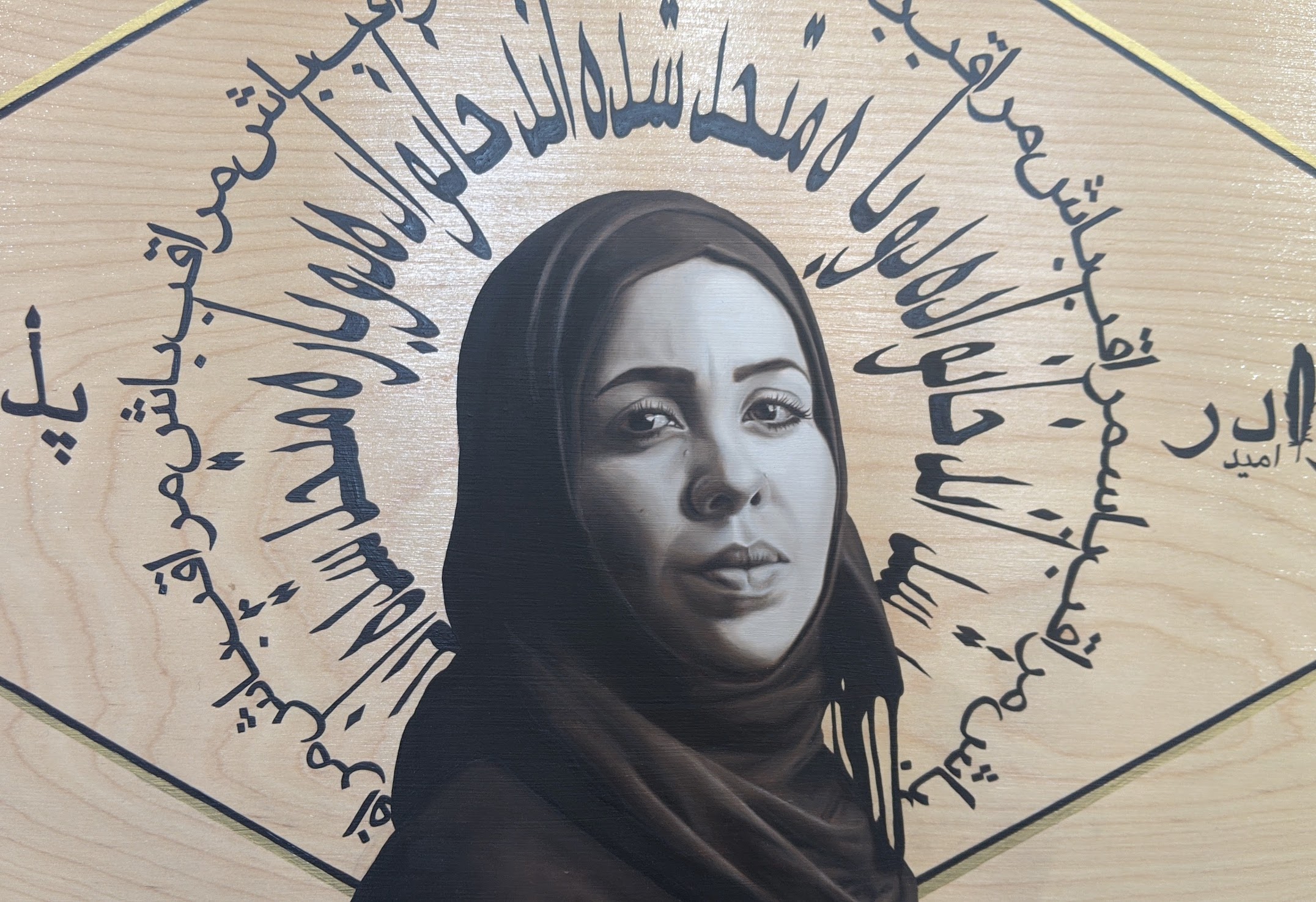 Two things seem to fuel Herrera’s work — symbolism and storytelling. In her breathtaking oil paintings on wood panels, she portrays semi photorealistic portraits (mostly) of women, accompanied by patterns she sources from their backgrounds, ethnicity, ancestry or practices. But these are no ordinary portraits — they are beautiful portrayals of women who have suffered and survived, posing in powerful and empowering ways.

Each portrait Herrera paints is born from a relationship she makes with the subject. Through interviews with women in northern New Mexico (near her home) as well as with refugee and immigrant women through the program Women Across Borders, Herrera listens to hours of stories and internalizes them. She then takes those stories back to her studio and paints an ode to the woman who told them, using patterns and symbology to represent the most important parts of the story or the most admirable qualities of the storyteller.

Herrera’s paintings are full of fine detail — so fine, sometimes, that it looks like a sticker instead of a paintbrush stroke. Her straight and steady hand lends to the simplicity of the backgrounds of her paintings, where you’ll find single colorful or dark brushstrokes starkly contrasted by light natural wood grain. The backgrounds are simple because Herrera wants the viewer to appreciate the shadows and illumination of the woman instead.

“I use the technique of chiaroscuro (high contrast from light to dark) to reference how a woman’s depth can only be rendered with her darkest of shadows present as well as her light,” Herrera explained.

In Twenty Toes, Herrera presents written stories accompanied by their portraits for four women — Elana, Hope, Aya and Saree. Their stories are at once heartbreaking and inspiring and it’s clear that Herrera has the ability to coax out the good and bad from within her interviewees — a sign of the trust she builds with each one of them. 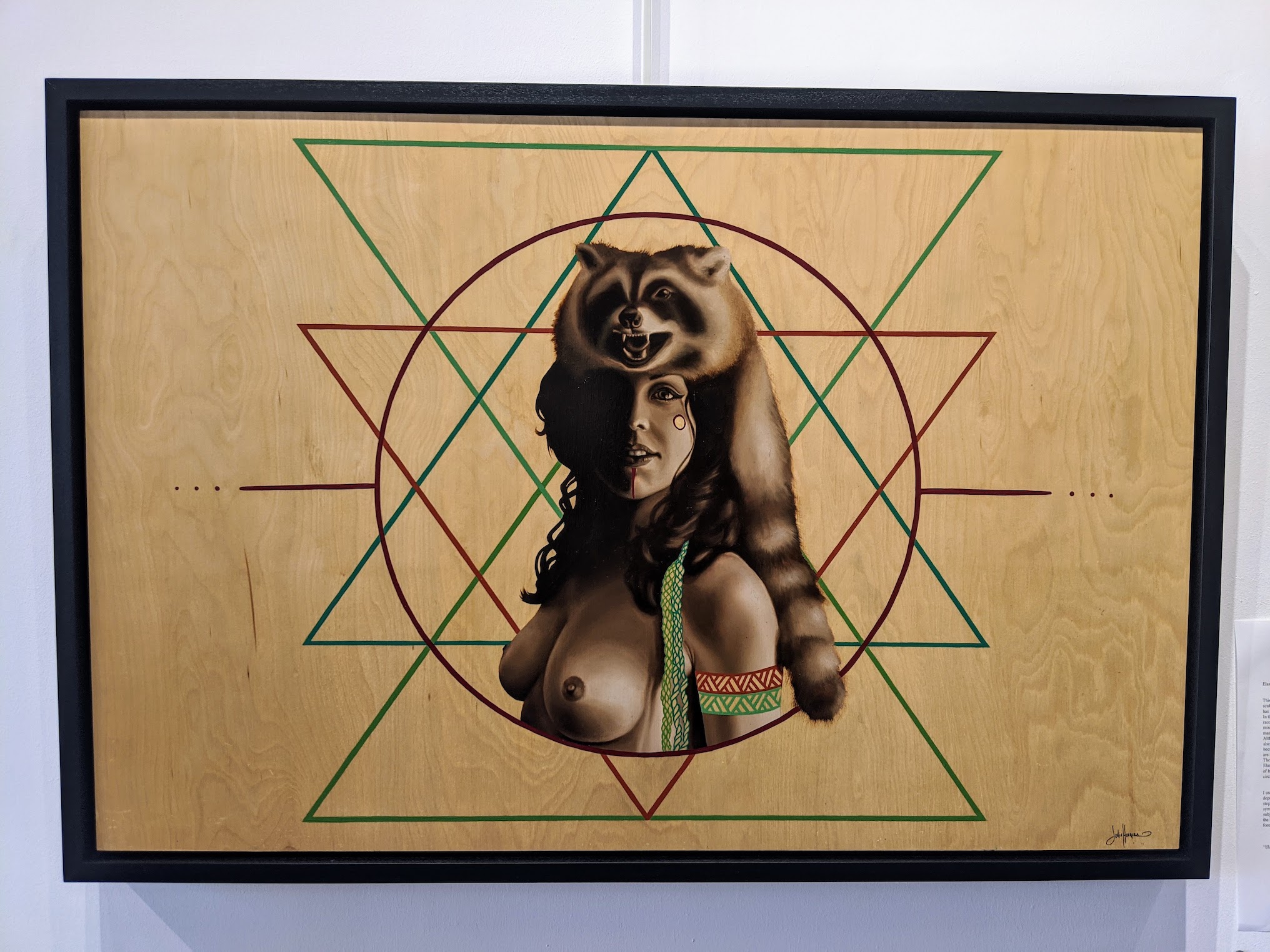 Some of Herrera’s portraits depict female nudity, and it’s a point she wants to make with emphasis. “I want to step away from the assumption that the female nude has to be reduced to dehumanized sex symbol or an allegorical figure of purity to be well received,” she commented. “The personal stories of female subjects are scarcely told and often censored. I intend to show that beauty is incomplete without the humanizing experiences that a woman obtains throughout her life. I utilize wood as the foreground to illustrate the raw nature of the content.”

Two pieces stand apart in this show because Herrera felt the need to respond to current events. The first is a piece made during self-isolation — a gloved hand holding a rose. The second is called Golden Straw and depicts a Black man’s fist reaching up, with the name “George Floyd” printed on the wrist, surrounded by a particular pattern that it has been said was used to denote safe spaces on the Underground Railroad.

The rest of Herrera’s pieces in the show are other portraits, sans written statements to accompany them. But once you’ve read the four featured stories, it’s hard to imagine any of the women on the walls to exist without a complicated, tragic, wonderful and lovely story. 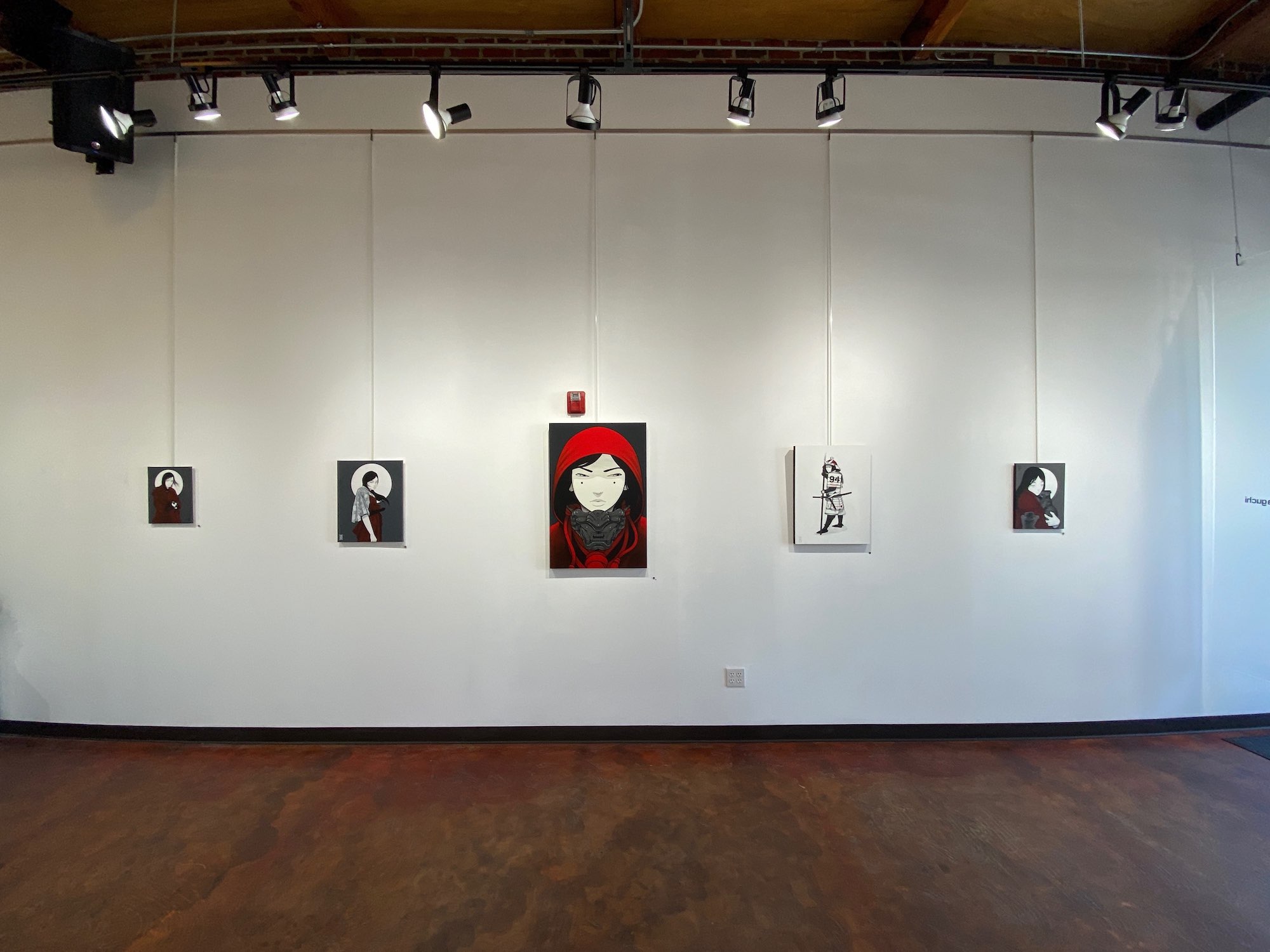 Since moving to Denver in 2015, Kawaguchi has made a name for himself by painting one large scale mural after another. Each one features the mysterious face of his Japanese-inspired character — in alleys and walls in RiNo, on 17th Avenue, in the Art District on Santa Fe and in Westwood. And yet even though the face has become familiar to Denver street art lovers, there is a great mystery about it. Does the character have a name? A story? A past?

In this exhibition, Kawaguchi took time to reflect inward about himself and this character he paints so frequently. He wanted to connect to both his “most delicate and powerful sense of self during this era of solitude and self-reflection,” as he explained.

In five portraits, Kawaguchi shows five different sides to the character and, most likely, different sides of himself. In three of the paintings, a large white orb sits behind the subject like a full moon. Its simplicity and starkness allow the viewer to take a closer look at the subject’s face. In this moment of inspection, it becomes obvious that Kawaguchi is one of those portraitists who can use a single line to change the expression and mood of his character. One thing that Herrera and Kawaguchi definitely share is their ability to paint unbelievably thin lines and make it look easy. 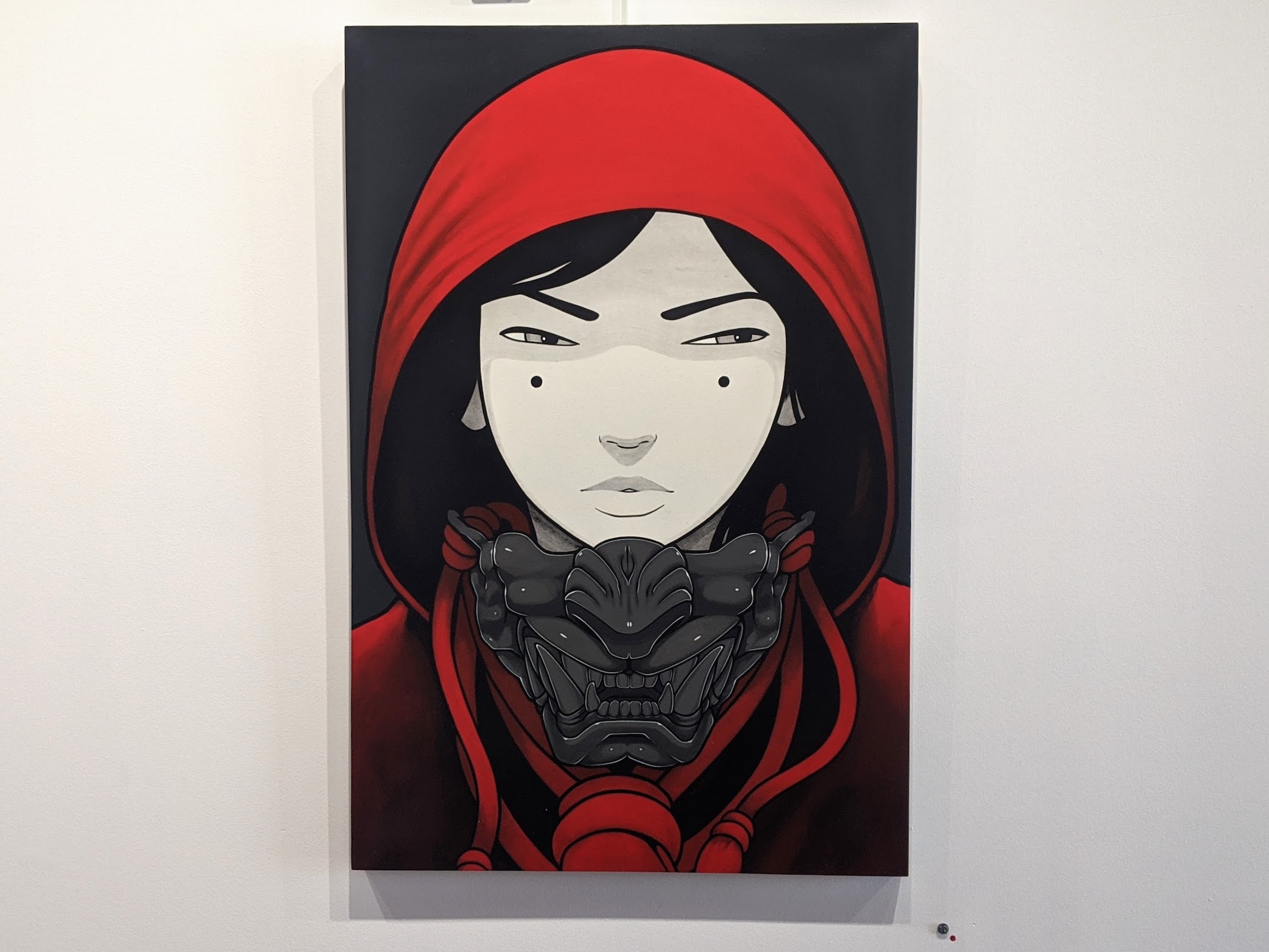 Kawaguchi has always been a superb minimalist though — using a limited color palette and simple linework. And yet his paintings, whether they are 20-feet tall on a wall or 12 inches on canvas, exude a liveliness and realness that makes the character he paints come to life.

Twenty Toes opened to the public last week on June 19 after months of waiting to see if an in-person gallery show would be possible. Ali, Talcott and co-director Casey Karns asked visitors to sign up for time slots ahead of time and to wear a mask while inside. Despite the restrictions, more than 150 people showed up to take a peek at the art over two days. No appointment is necessary to see the shows now.

ILA Gallery is located at 209 Kalamath Street, Unit 12, Denver. It is open Tuesday through Saturday from 2 to 6 p.m.