Dane Frost, the founder of Darklands Vintage, has always used fashion as a form of self-expression. Through his many phases — like most of us have throughout life —clothing remained an extension of himself, a way to tell a story, and a hobby to keep up with. “Clothing is something I’ve loved and been perceptive of, even as a small child,” said Frost. He continued,

“Clothing to me is an extension of the person wearing it. It’s story-telling. It’s costume design. It’s a reflection of your influences and interests, people you aspire to be. Inspiration can come from so many different artistic mediums, so I think clothing as one of those mediums has a very important place in our history and culture.” 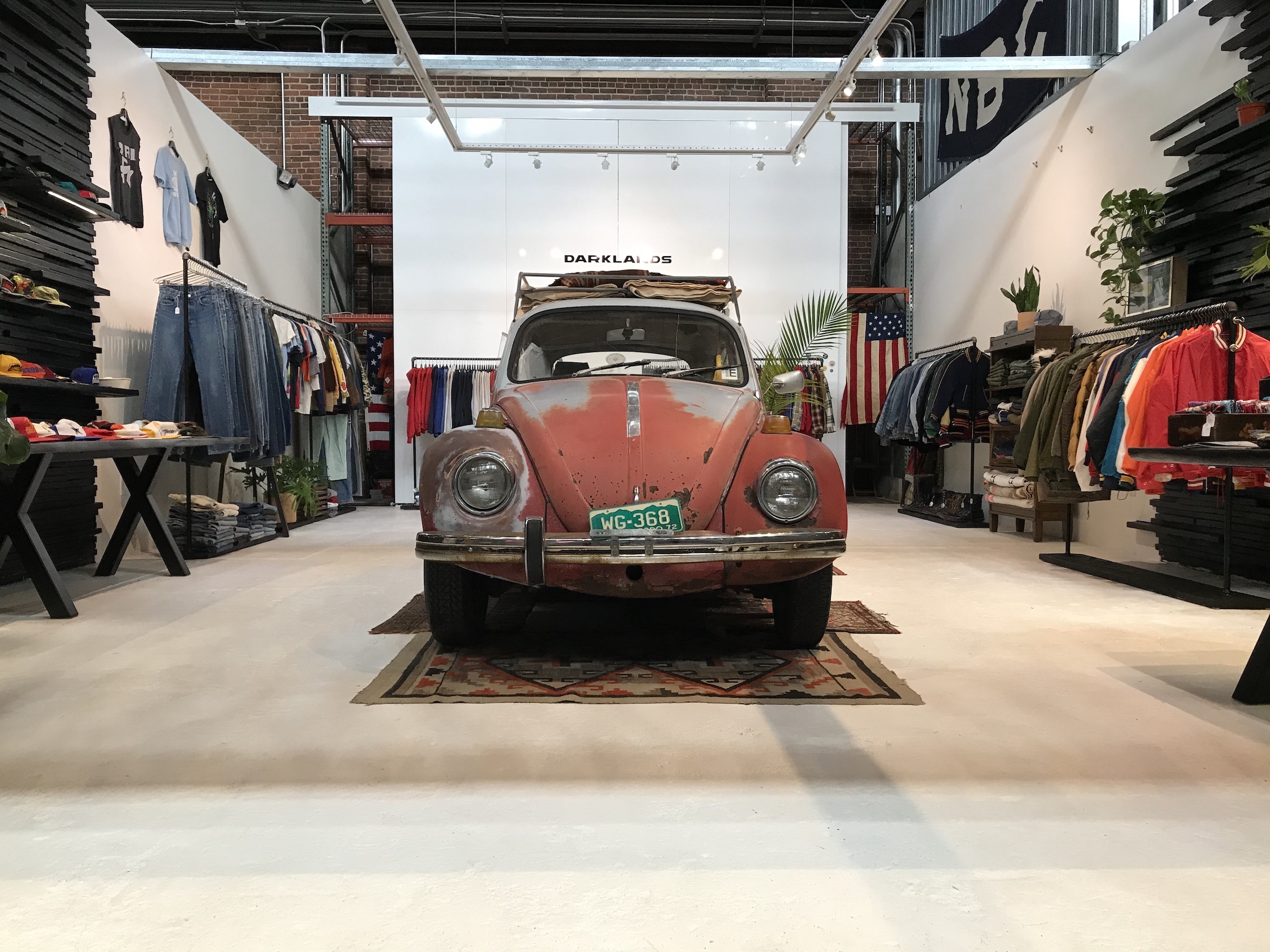 Frost noted that there are pros and cons of both online selling and selling in person at his brick-and-mortar location, noting that allowing people to see, feel and try the pieces on is one of the biggest benefits of selling in person. “A major pro is being able to physically see the garment in a way that, sometimes a chest measurement or length measurement online isn’t going to provide,” he said. He also explained that being able to express an idea or a larger picture is another positive to the brick and mortar store. Although this is the case, Frost admits that it’s hard to dismiss that everyone is connected to the internet nowadays, making the vastness of the internet an unlimited market. He concluded, “You definitely find a much larger audience with online selling and that can be really cool too. I’ve been able to sell some pieces to some pretty well known people by having that online presence.

Instead of playing sports, Frost was an art kid who started thrifting in high school. He and his friends would go to Salvation Army’s and other thrift shops in Massachusetts and New Hampshire, searching for, “cool old shit,” like clothes and cameras. With a passion for thrifting growing up and appreciating fashion as an artistic medium, Darklands first was created as an online boutique through Etsy and now also thrives in The Source in Denver’s RiNo neighborhood.

Frost described Darklands as, “the place on a Venn diagram where all the shit I love overlaps.” He explained how, style-wise, the shop intentionally has a pretty broad spectrum, wanting to have space for a lot of options for people but with a curated selection that didn’t feel like it was going in every direction at once. “I’ve had a lot of people come in asking if it’s a menswear store,” said Frost. “Partially, yes, by default, but not by design. I’d like to think it’s just universal pieces everyone knows and loves. Perfect-fit jeans, perfect broken-in tees, 60-year-old Pendleton shirts, denim and leather jackets,” he concluded. Frost noted that items like these are timeless pieces. 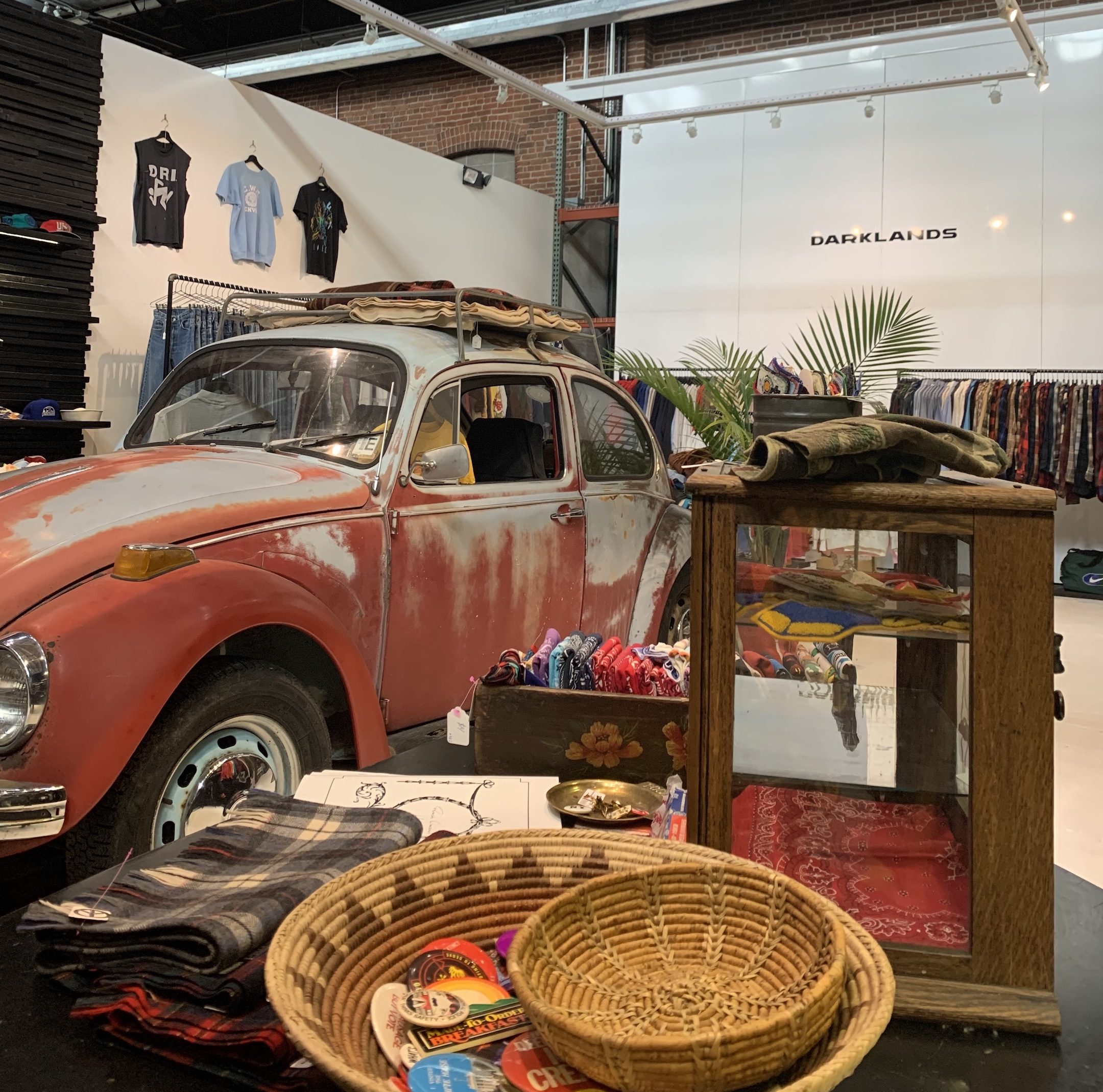 To Frost, thrifted clothing is far more than something you wear. To him, it’s a platform for expression of personality and character. Frost stated, “I’m interested in the story clothing tells. Vintage clothing, in particular, tells a unique story.” So, these pieces he finds not only help people tell their story as they wear them, but help to tell a bigger story of the journey and character the pieces have. “Looking at a piece that’s got wear or fading or really unique holes on the shoulder or back of a t-shirt, where the material is so threadbare from going under intense wash and wear on a weekly basis for 30, 40, 50+ years. It’s beautiful” said Frost. He goes on to say that damage has intent and purpose, and is part of the story. He continued, “To me, the imperfections actually make the garment more perfect; it’s very romantic in that sense.” 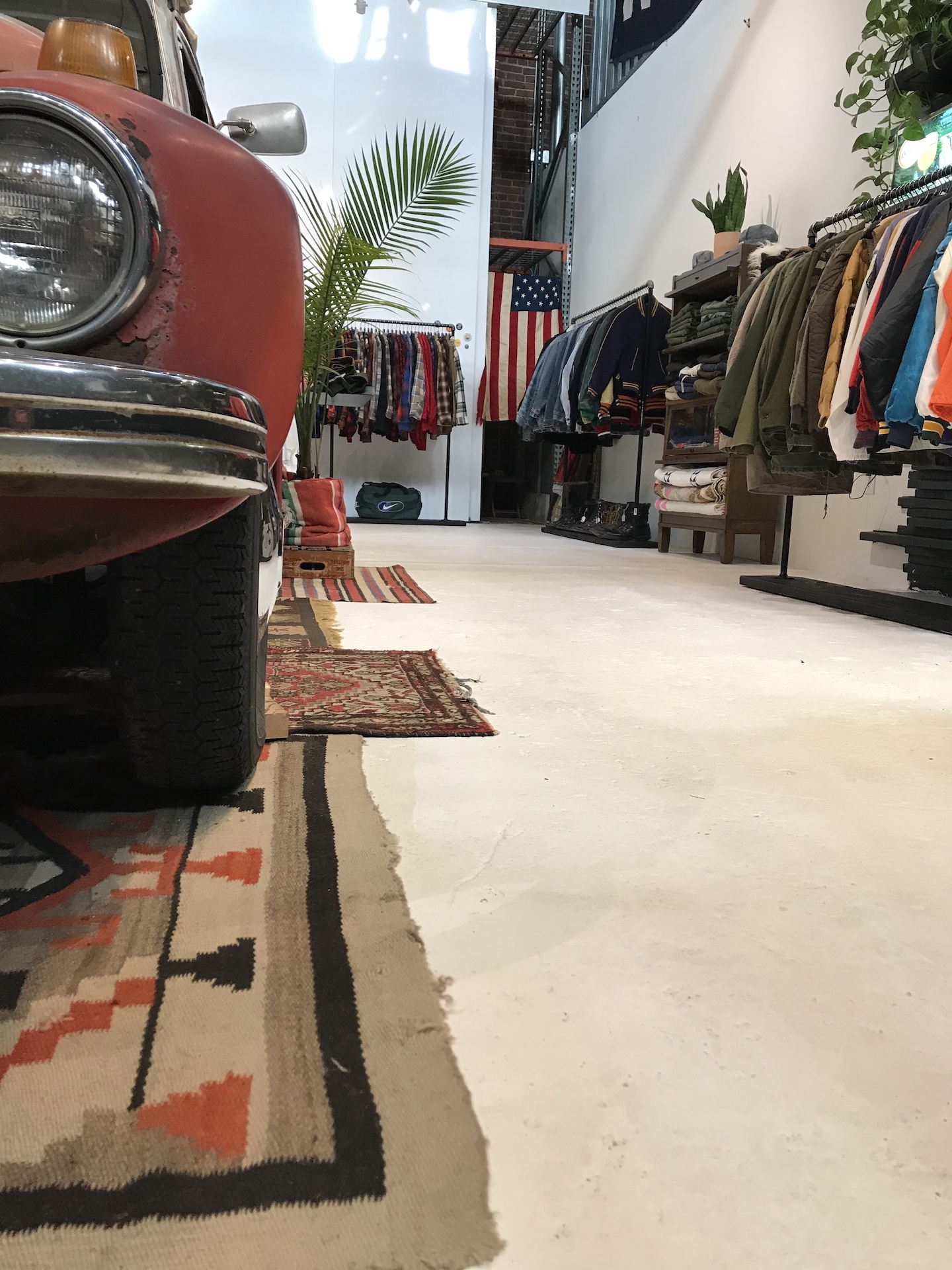 Darklands is a direct extension of Frost’s personal style. “It’s just easier to stock what you know and what interests you,” he said. Frost’s style remains fairly simple, but he makes sure that people, especially his customers, know that he appreciates good quality over everything else, stating, “I think having fewer, but quality- made pieces rather than an overabundance of season, trendy junk is important.”

When asked about his thrifting process to determine what items make it in his brick and mortar store location, Frost said that the most important part of his buying process is his selectivity. “I actively choose pieces that fit into the aesthetic of the shop, pieces that help tell the story of Darklands, from generations or movements through history that interest me,” he said. Outlets are some of the places Frost finds his products and explains they can be the best place to find pieces because, “sometimes the quality or condition isn’t up to standard for racks, but instead of getting sent abroad to be turned into cotton pulp or rags, it gets one last chance.” 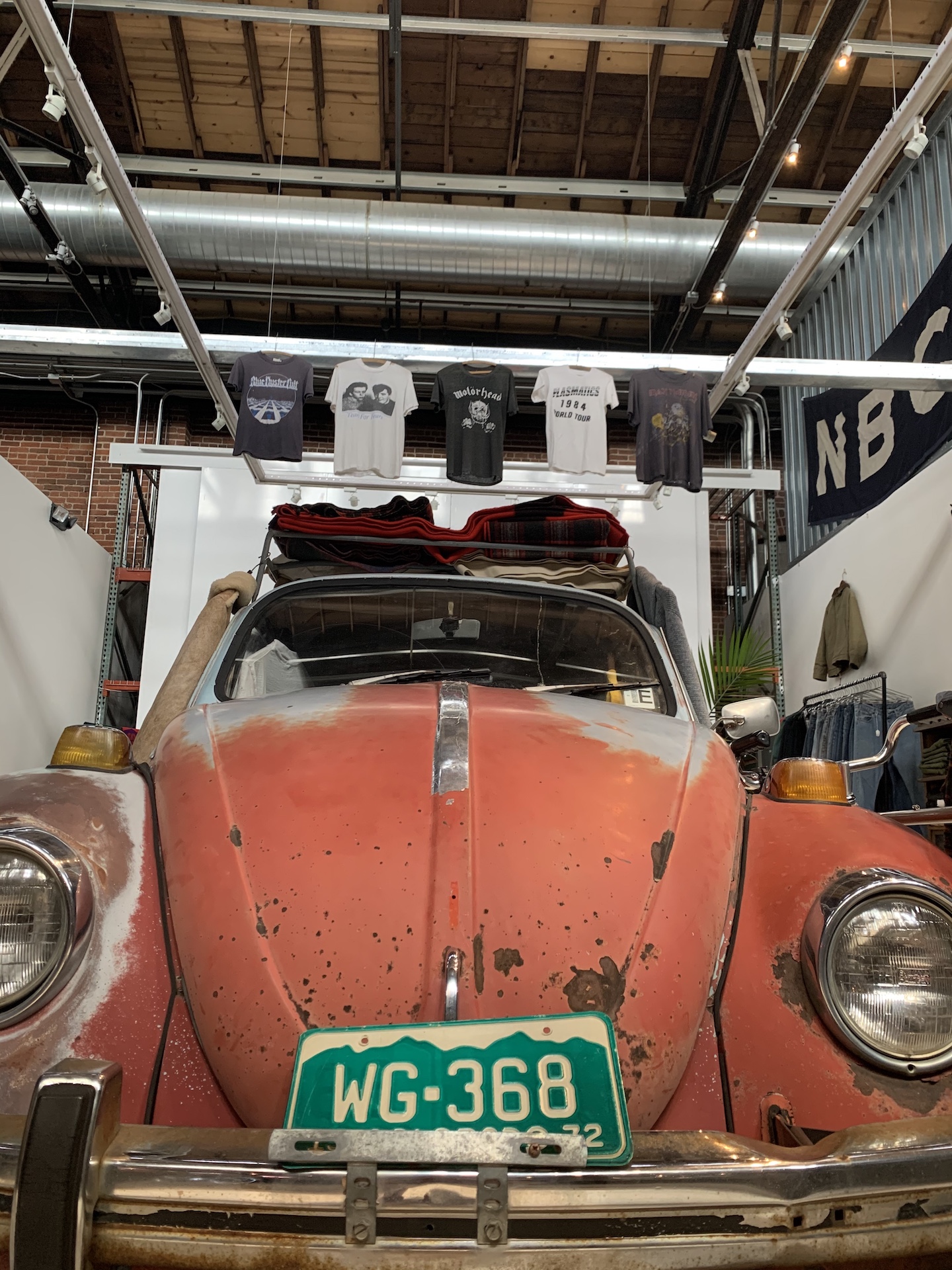 “It’s the thrill of the hunt,” Frost said when describing his favorite part of the thrifting process. He went on to say, “Finding something rare or special that you’ve always been looking for is one of the most fulfilling feelings.” On the business side of things, seeing guests return is what he says is his favorite part of being a business owner. He said, “Having people tell me that it’s their favorite shop in Denver, especially with so many other amazing shops, people and friends doing this, that truly warms my heart.”

Frost’s journey into the fashion business hasn’t always been easy, though. He says there is an uncertainty that comes with the entire profession. “If people don’t value clothing the same way they do now, who knows when and where this will end,” said Frost. He also notes that with the popularity of fast fashion in today’s society, having to dig through lower quality brands and so much clothing makes finding a single item tricky. Frost said he thinks this is what keeps vintage’s value appreciating.”The amount of work it takes to find a single worthwhile piece is exponentially higher than even last year,” said Frost.

As for the future of Frost and Darklands, he has high hopes and plans. “I want to do more creative projects, a coffee program, a record bar, a motel, a nightclub, a second shop somewhere. The list grows by the day,” he said, noting that the creative possibilities are endless and spread far beyond just the fashion world.

All photography provided by Dane Frost