Review – It Was Doja Cat’s Snow Show, and the Rest of Us Were Just Living in It (Including Tyga)

As Coloradoans, the prospect of snow incites us to turn up rather than hunker down. Indeed, the line outside the Fillmore on the evening of February 29 — this year’s date of local radio station KS107.5’s annual Snow Show — was nearly as long as the lift lines at Vail. The event sold out for the same reason people showed up to it so early: the cavalier female rapper Doja Cat would perform as an opener, right in the thick of her pop-cultural moment.

This past week, Doja Cat performed her 2020 single “Say So” on The Tonight Show starring Jimmy Fallon and released the music video hours later, which already has 11 million views. She also announced and sold out all the dates on her North American “Hot Pink Tour.” Meanwhile, her name trended worldwide on Twitter, and her 2019 single, “Juicy,” went platinum. In light of these events, it’s no wonder that many Snow Show attendees kept forgetting (and maybe didn’t want to remember) that Doja Cat wasn’t actually the headliner — Tyga was. Over the course of the evening, audiences were reminded of this fact. 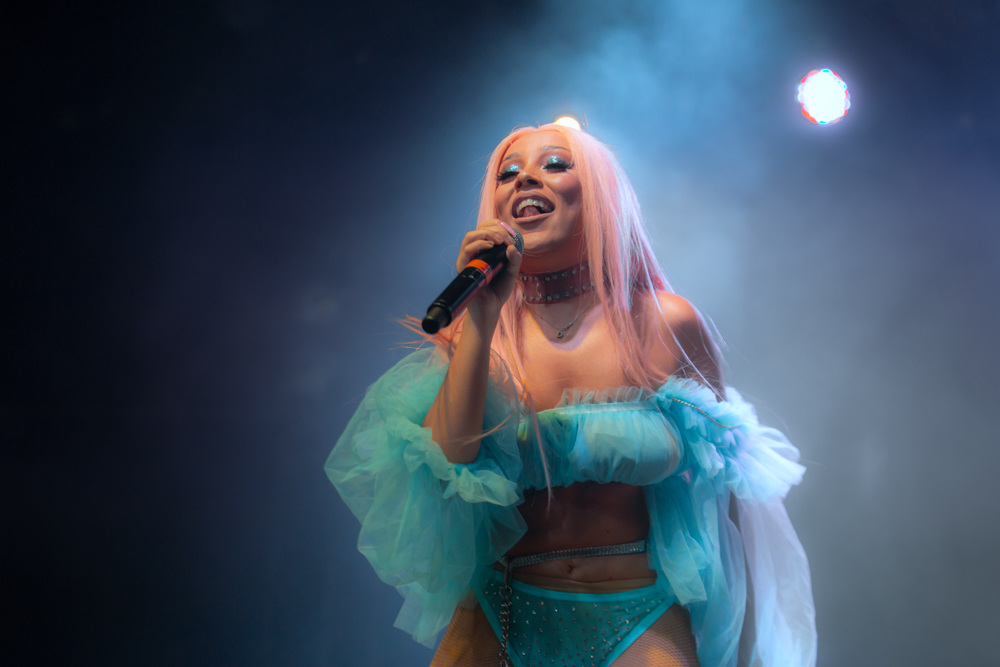 The length of Doja’s set and its relatively sparse production marked her status as an opener, but she worked within these structural limitations to serve Denver with some superstar power. Backed by only a DJ and a screen of Powerpuff Girl illustrations, she ripped through 10 original songs in her allotted 30 minutes, stopping only once to send out an “I love you” into the crowd’s minute-long deafening roar that followed her performance of “Go To Town.” The qualities that make her studio hits so singular — her variance of rhythmic delivery, the many voices she adopts and characters she ventriloquizes — were also at the heart of her live performance. In every sense of the phrase, her vocals delivered.

Hardly a second after singing the last note, Doja Cat announced, “Thank You! I’m Doja Cat; I’m heading out!” and then exited in a flurry of baby blue fabric. Not an insignificant amount of audience members left at that time, too. 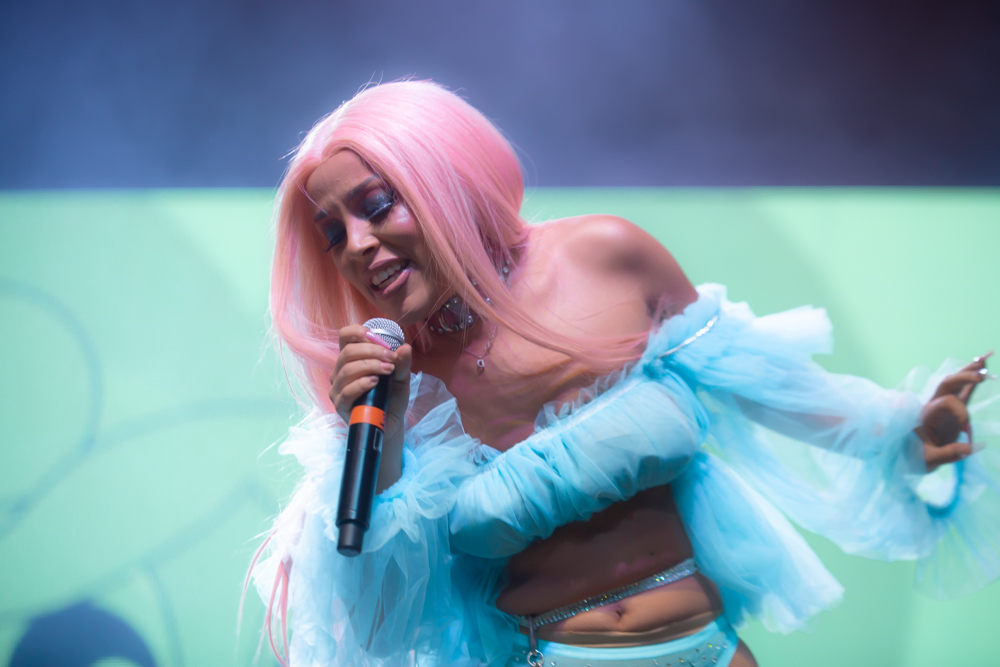 Those who left with Doja ended up missing out on a good time because the majority of Tyga’s headlining set was worth seeing. Yes, he opened with a song called “Lightskin Lil Wayne,” and yes, he closed with “Ayy Macarena,” his 2019 remix of Los Del Río’s 1993 classic (which he already performed that night). But for the rest of his time on stage, he used the sheer size of his discography to his advantage. He’s released seven studio albums, 19 mixtapes and 40 singles, and has featured on three compilation albums and 34 other singles. There are more than a few diamonds in this ruff, and Tyga showed them off.

Tyga’s Denver performance was unofficially separated into little subsections. First, he played some of his more recent hits, showing that he’s come out on the other side of his creative and commercial drought that lasted from 2015 to 2018. Following 2019’s “Lightskin Lil Wayne” was “Dip,” a single featuring Nicki Minaj, and “God Damn” — Tyga’s Lil Nas X-inspired track.

Then he revisited his glory days of 2012. His best album, Careless World, Rise of the Last King, released that year, and he performed its best songs, which include “Make It Nasty,” “Faded,” and, of course, “Rack City.” Tyga also rapped his verse in Drake’s iconic 2012 single, “The Motto,” in which the Toronto star gave the world the term “YOLO.” 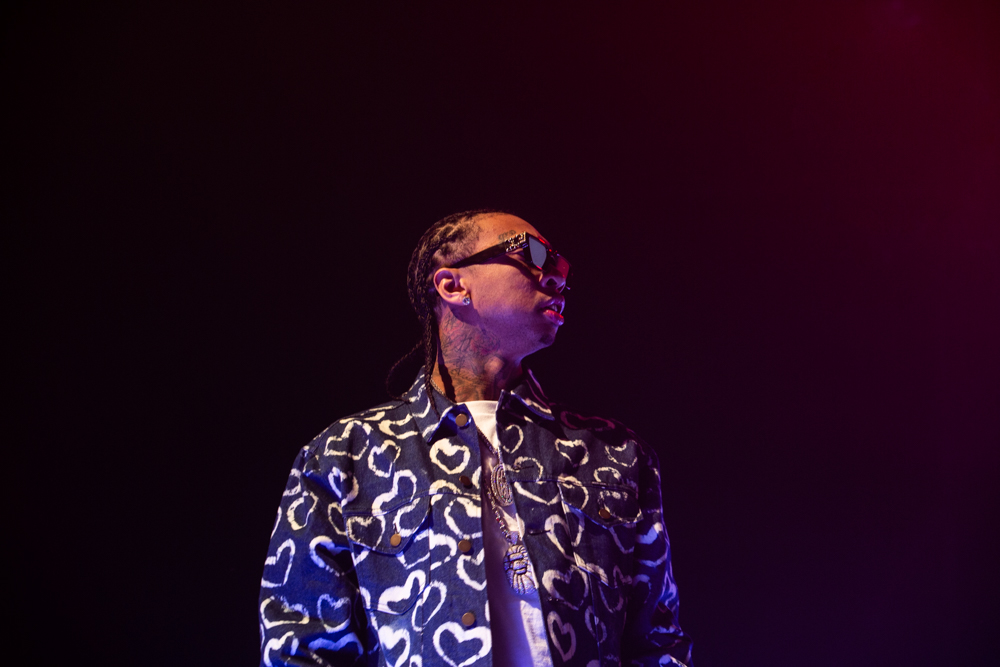 Following the 2012 re-wind, Tyga recapitulated some of he and Chris Brown’s collaborations, such as 2014’s “Loyal” and 2015’s “Ayo.” Shortly after, he launched into a series of Latin-based songs that he contributed verses to in 2019. They include YG’s “Go Loko,” Ambjaay’s “Uno” and DJ Snake and J Balvin’s “Loco Contigo.”

The final subsection of Tyga’s time onstage was the oddest one. Around a hundred women — who were ostensibly selected from the crowd throughout the night — emerged from backstage and danced for three songs in a row. None of these songs were Tyga’s, or even related to him in any way. Audience members began petering out shortly after, and then left en masse once they realized Tyga was heading towards another round of “Ayy Macarena.”

Though the conclusion of Tyga’s set was lukewarm, he achieved what he set out to accomplish. He reminded us of his hand in making countless Billboard-worthy bangers in the last decade and proved that he still has the chops, the stamina and the showmanship to pull off a complete comeback. Whether his errors in judgment outside the studio should influence his musical rebound is up for fans to decide. 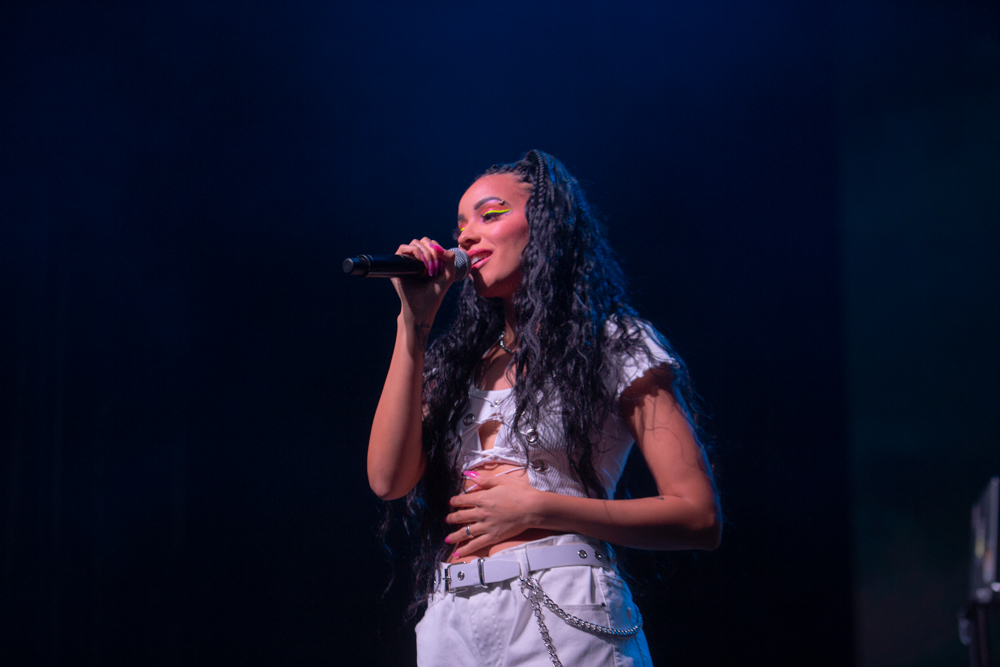 Denver’s own Kayla Rae — who won 303 Magazine’s award for Best R&B artist last year — gave a 30-minute set before Doja Cat and provided the evening’s wholesome content. In between choreographed performances of her lush hits, she gave short speeches about how she developed the habit of choosing love every day. It tugs on the heartstrings to imagine what she must have felt after “On 10,” when her hometown audience chanted her name over and over again. She also deserves props for setting the mood of the concert by nailing the vocal crescendo the chorus of her first song, “Self Control.” Simply put, Kayla Rae arrived that night and challenged both the audience and the subsequent acts to do the same.