The little things can make a huge difference in someone’s life. If you’ve seen the cheerful, mint-green trucks driving around town, you’ve probably pondered their purpose. The words “laundry” or “shower” emblazoned in bold letters are only slightly representative of their mission. They’re serving Denver’s homeless population.

According to a Point in Time Survey conducted in January 2019, there are 3,943 homeless people living in the City and County of Denver — 428 of which are newly homeless. Although a large percentage of that number currently resides in transitional housing or emergency shelters around the city, there are still hundreds of people that are completely unsheltered. 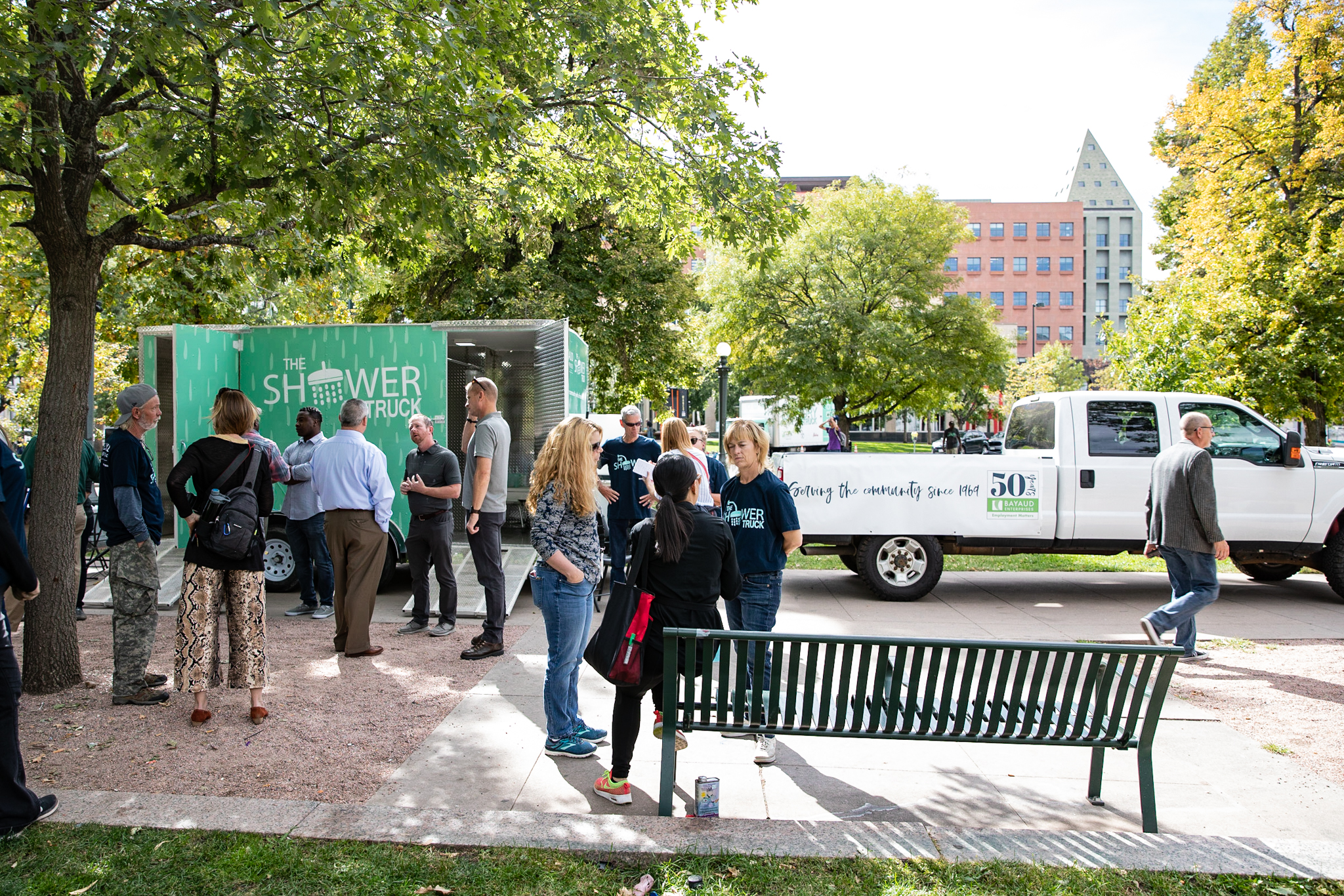 Since 1969, nonprofit organization Bayaud Enterprises has been dedicated to changing the lives of Denver residents by providing employment coaching and other resources necessary to obtain stable income, housing and healthcare. Bayaud initiatives include the Denver Day Works program, which is designed to offer low-barrier work experiences for adults experiencing or at risk of experiencing homelessness.

While Bayaud’s number of success stories through the Denver Day Works program is high, Riley Cockrell, the mobile services program manager for Bayaud Enterprises, says the waitlist for assistance can be long — a dilemma that caused Bayaud employees to brainstorm other ways to help the homeless.

The idea for the two laundry trucks came a couple of years ago when Bayaud learned that Denver Day Works program employees that once experienced homelessness would often struggle to regularly wash their clothes. It was an obvious problem, but the solution proved to be complicated. After six commercial washers and dryers were installed inside two trucks, Bayaud’s first mobile service was underway. While the clean, dry clothes were appreciated, many laundry truck users still wished for a hot shower.

With a similar concept in mind, Bayaud began to construct the shower truck — a safe haven for those struggling to maintain a daily regimen that many of us take for granted. It took over a year to get the shower truck up and running in October, but Cockrell says it’s been incredibly successful with roughly 10 users per day. 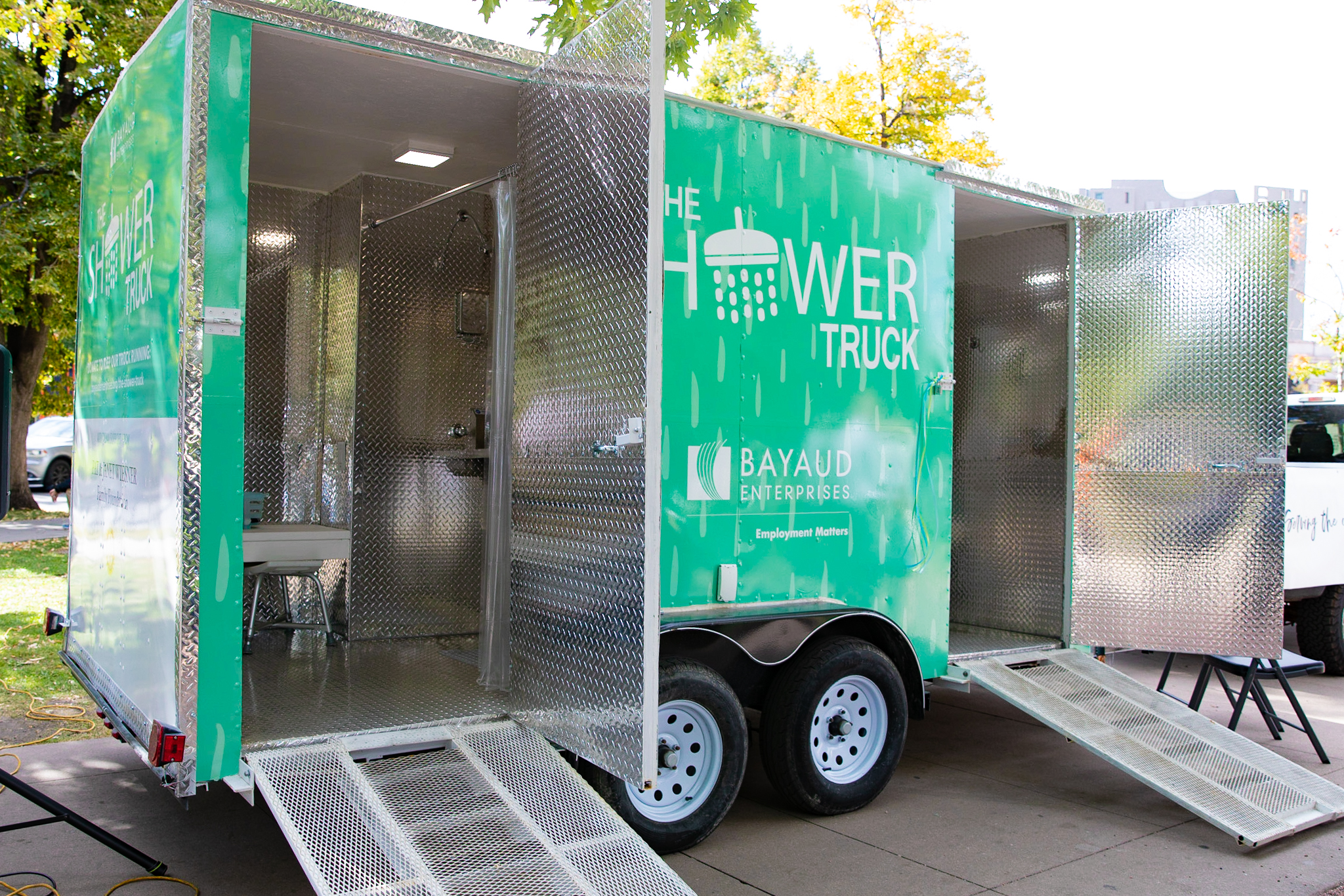 “People thank us in big and small ways,” he said. “We don’t have people breaking down in emotion in front of us, but they express gratitude in a lot of different ways.”

The shower truck, which regularly follows a typical route alongside the two laundry trucks, makes stops at the Denver Central Library, the Blair-Caldwell Library and Bayaud’s main office in Baker.

Inside the truck are two private stalls that are non-gendered and wheelchair accessible, a bench, a changing area, hooks for clothes, a sink and a mirror. Users each have 20 minutes to shower and get dressed and are able to use disposable razors, soap, shampoo and towels as well as complimentary clean socks, underwear and T-shirts.

Sometimes the shower truck is available along with one of the two laundry trucks, so that users can wash clothes while they rinse. It’s a humbling sight — especially since the employees that run the laundry trucks and shower truck were once homeless themselves.

“They’re run by people in the Denver Day Works program. We think that’s important because we really want to be a service that is sort of by and for the people who are using it,” Cockrell said.

With this full-circle setup, Bayaud hopes its employees will encourage shower and laundry truck users to take advantage of all the resources in the Denver Day Works program.

“We essentially want to get people who are out of the workforce for one reason or another back to work. We hope that we can use these mobile services as an outreach tool to build trust with the community and let people know about the other services we offer. The goal is to eventually get people signed up to be in the Denver Day Works program.” 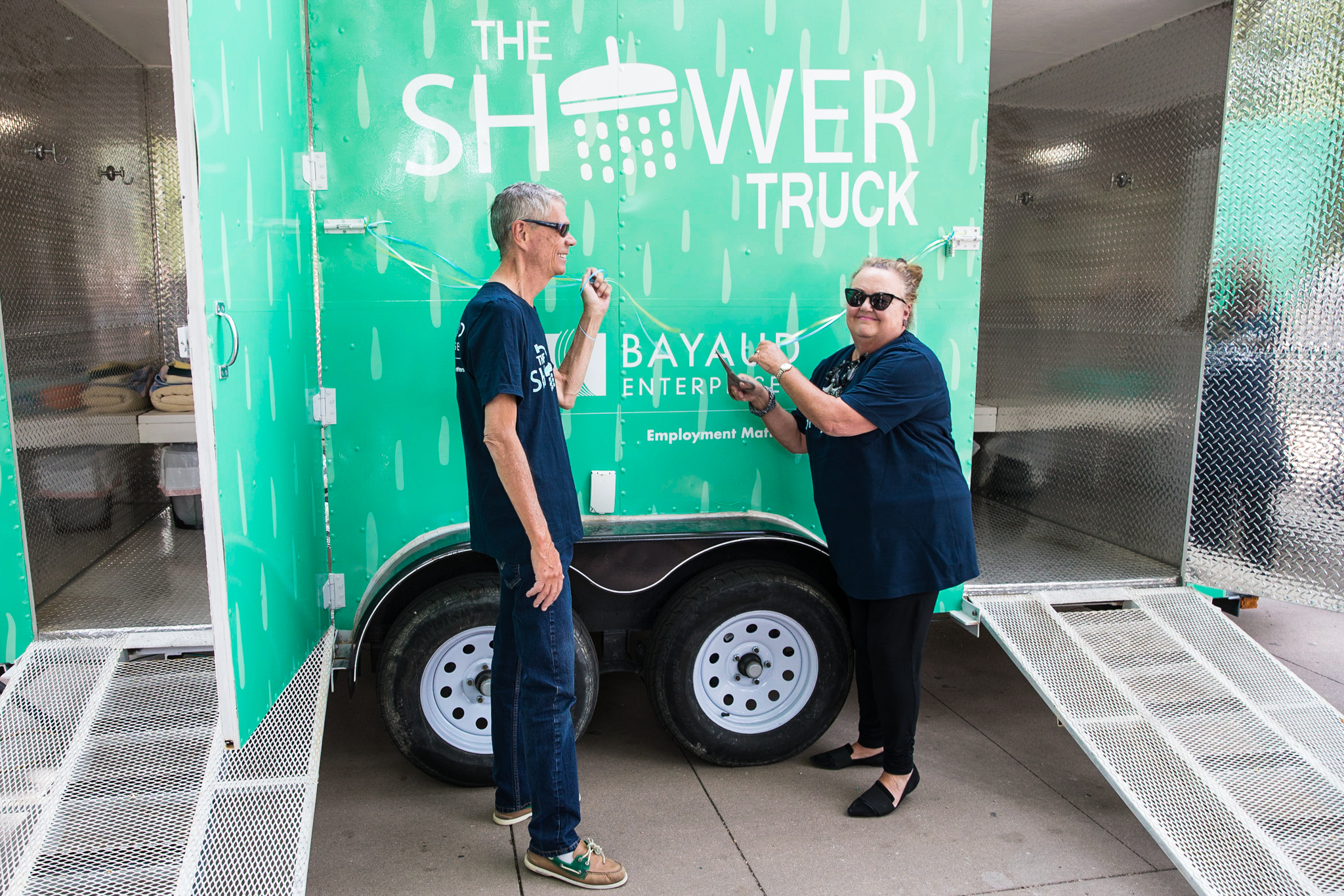 Although many people use the shower and laundry trucks, sometimes getting cleaned is all they have in mind, but Cockrell says that’s okay.

“We respect people’s right to access any level of service that they want. A big part of our program is to meet people where they are. We certainly don’t require people to participate or push people in any direction. We just want to help people achieve their own goals,” he said.

For Cockrell and other Bayaud employees, the shower truck and laundry trucks are designed to boost confidence.

“Clean laundry and showers go a long way to provide dignity for people. Part of our mission is to make sure that people feel their best, so they can do their best in the world,” Cockrell said. “I think when people can’t get their very basic needs met, it becomes pretty impossible to move on and address bigger issues that they’re facing. We really help people meet those basic needs, so that they can go on to achieve the other goal that they have, which often includes getting a house or getting a job.”

Making sure the homeless receive the same amount of dignity and respect is meaningful for Cockrell.

“It’s important to me because I care about Denver being an accessible place for everybody. I want the city to remain a place where people of all economic backgrounds and experiences can thrive,” he said. “Just like for everybody, it feels good to have fresh laundry and a shower.” 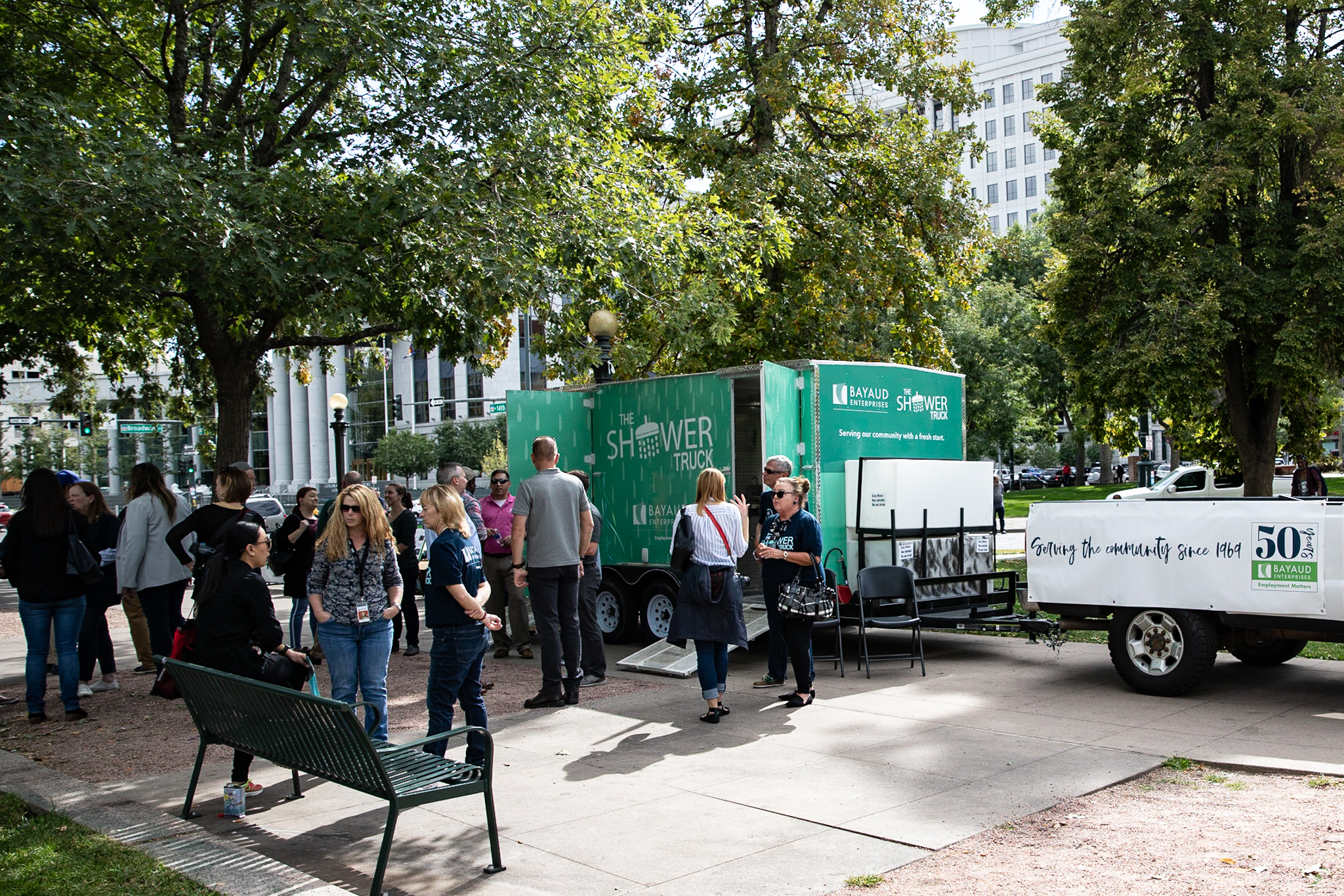