On Wednesday, February 26 Berkeley Donuts hosted its grand opening in the illustrious pizza, beer and sandwich staple Hops & Pie. Functioning in the morning inside the original space, owners Drew and Leah Watson’s new project continues the legacy of excellence established by Hops.  Now, the spot also serves a range of potato doughnuts that include more classic flavors, sourdough-style, vegan and gluten-free options and an unmissable breakfast sandwich. While there is no change in outward appearance, the kitchen underwent a massive overhaul during a seven-day closure in January. 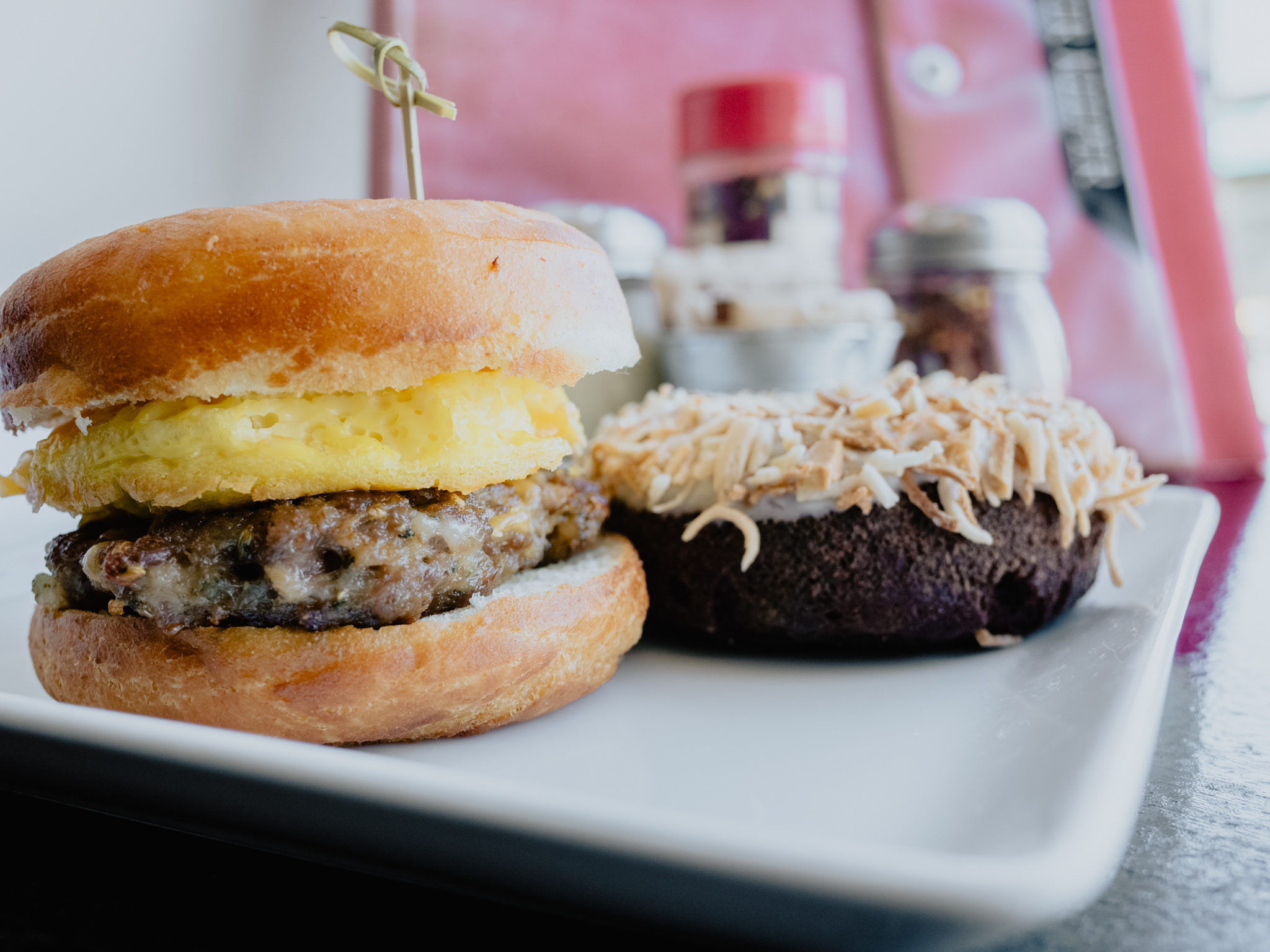 The series of serendipities that eventually led to the concept’s opening began with a 2016 bachelor party in Portland, Maine. Drew’s morning-after stop at The Holy Donut generated a surge of inspiration, with him returning to Denver to tinker with doughnuts at home nonstop for several years. Leah provided research and development. “I brought the tasting aspect, the brutal honesty,” she grinned. The plan was always to eventually serve them to the public, the decision to use the Hops & Pie space came out of convenience and a long-standing love for the neighborhood it has been a part of for just shy of a decade. As the idea brewed, Drew returned to Portland on a 24-hour reconnaissance trip with the sole intent of trying all three of Holy’s locations. Much to his surprise, he discovered the original spot stood next door to the house his mom had grown up in.

Head baker Audie Mauk — a former employee of Hops who worked every position including sous chef and front of house management — had been quietly dreaming of opening a doughnut shop since he graduated from Cook Street School of Culinary Arts. After a stint in fine dining kitchens including Table 6 and Fruition he worked at Lakewood’s Taste of Denmark. “I made many a croissant in that building,” laughed the chef. Having grown up cooking either crepes or doughnuts at home on the weekends, Mauk imbues the options available at Berkeley with palpable nostalgia — the clear result of both decades of experience and the desire to recreate the childhood joy. While Drew had the initial revelation, he and Mauk develop the flavors together. “We trust each other’s palate,” noted Mauk.

The potato-style doughnuts are a New England staple. Berkeley uses Russets from Jones Family Farms to give the pastries added fluff — the fresh spuds being cooked, riced and added to the batter. “Our classic and familiar favorites, we’re just blowing it out of the water,” said Mauk. The Strawberry Homer — available in vanilla cake ($3), chocolate cake ($3) and sourdough ($2.25) options — comes with a glaze that employees have rightfully dubbed “pink crack.” More elaborate options including the s’mores ($3.75), the salted caramel ($3.75) and the brown butter Rice Krispy ($3.50) delight in both novelty and flawless execution. The B’fast Sando ($6) with house-made maple sausage, egg and cheddar atop a plain sourdough doughnut is the most exciting item on the new menu, the subtle sweetness of both the doughnut and patty dance lightly atop the sharp cheese. To wash it all down, Novo Coffee is served on drip.

“I’ve lived and worked in the Berkeley community for a long time,” said Mauk. His love for the neighborhood is evident, the chef clearly enjoys getting pastries into the hands of his friends and neighbors. The menu will continue to feature the established staples with a few seasonal selections and a weekly option to be added down the line.

Berkeley Donuts is located inside Hops and Pie at 3920 Tennyson St., Denver. It is open Wednesday – Sunday 7:30 a.m. until sold out.