Ramakhandra Talk Creation and A Cosmic Search For Identity

How do you rediscover the imagination of youth? To feel that unburdened animation, the fantasy conceived among Saturday morning cartoons and cereal, ambling its way out the door and reverse its course? Creation now is different than it was then — there’s been more existence, there’s been more pain and setbacks. Dipping into a blasé basin of the human condition to describe that which is commonplace — heartbreak, betrayal, etc. — how does one feel sadness in any color but blue? It’s not as simple as coloring outside the lines of an easily duplicated stencil. The hot tailed pursuit of originality lies at the core of any creative endeavor, but what does it truly mean? That question, among others, rests squarely on the tongues of Denver’s Ramakhandra, and their vivid amalgamation of genres and jurisdiction. Like the principal pillar of the Hindu deity from whom they take their name, for Ramakhandra, it’s more than a method, it’s their duty. 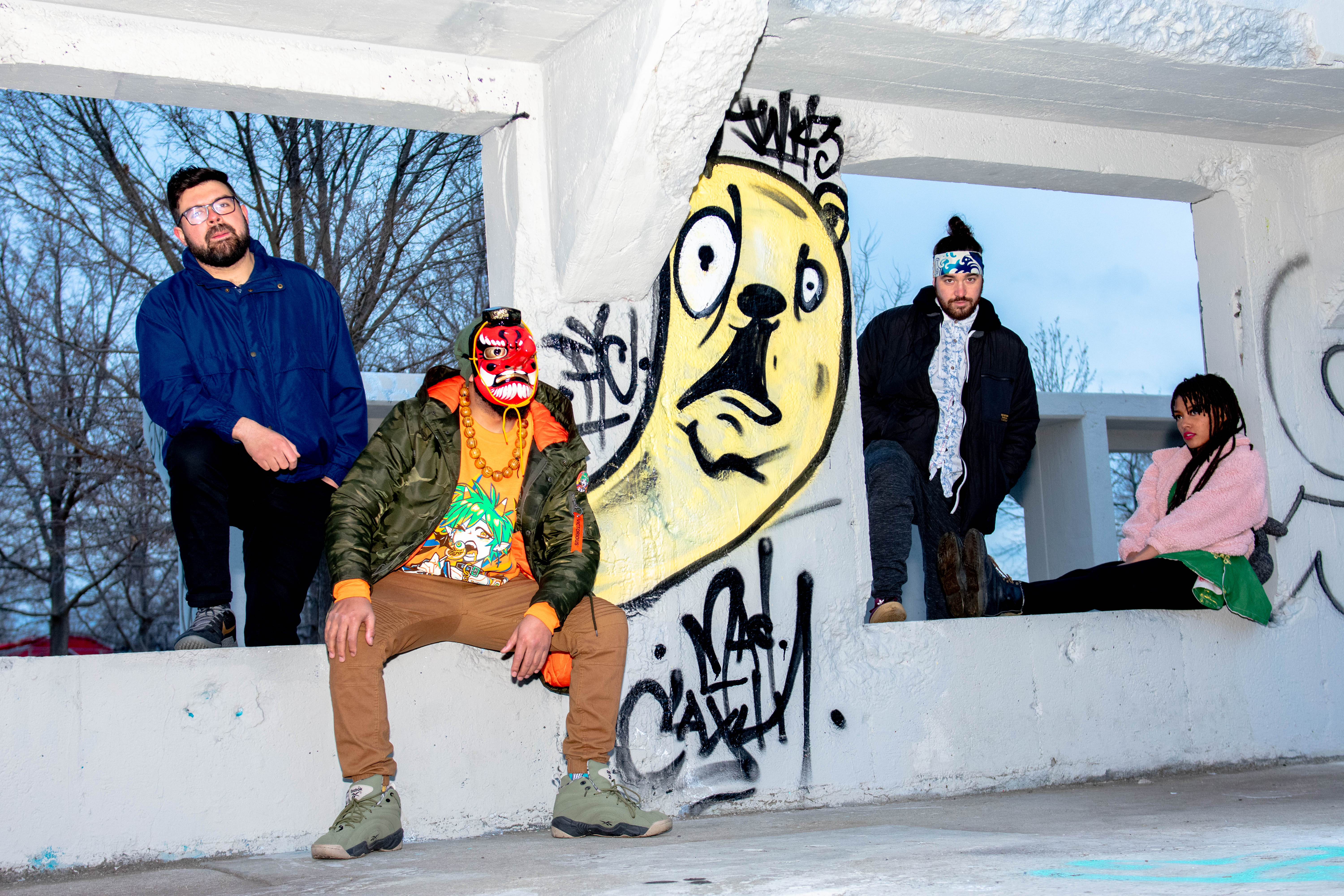 No place is safe for Ramakhandra, and they know that. The mundanity of slinging sushi rolls and battling cyber fraud bears little opportunity to escape the loaded gun of “traditional” adulthood poised squarely at their temples. The four-piece band, most preferring to rely on pseudonyms — Annastehzaa (the only real name) on harp and vocals, Clato on bass, Ness on synthesizers and Nobahdee on drums, are quite literally a cast of characters seeking asylum in each other. The result is a graphic illustration audaciously sketched in music — a menagerie of part and parcel of each other’s story, wherein Nobahdee says it best, “it feels like this music is kind of just being remembered and in a sense discovered.”

To understand what he means is to understand how the band crossed paths in the first place. Each member unknowingly connected around the same couple of blocks in downtown Denver in the span of a year in what can only be described as fate. With Annastehzaa busking on 16th Street Mall with a full harp in tow, and Clato hustling in a nearby sushi joint, it was only a matter of time before he’d eventually stop for a smoke break and a double-take.

“I always say this,” remarks Clato in regard to meeting Annastehzaa, “it was one of those really clear moments in life where you see an alternative path. It’s like, ‘if I do this, things will be different — it will change everything.” 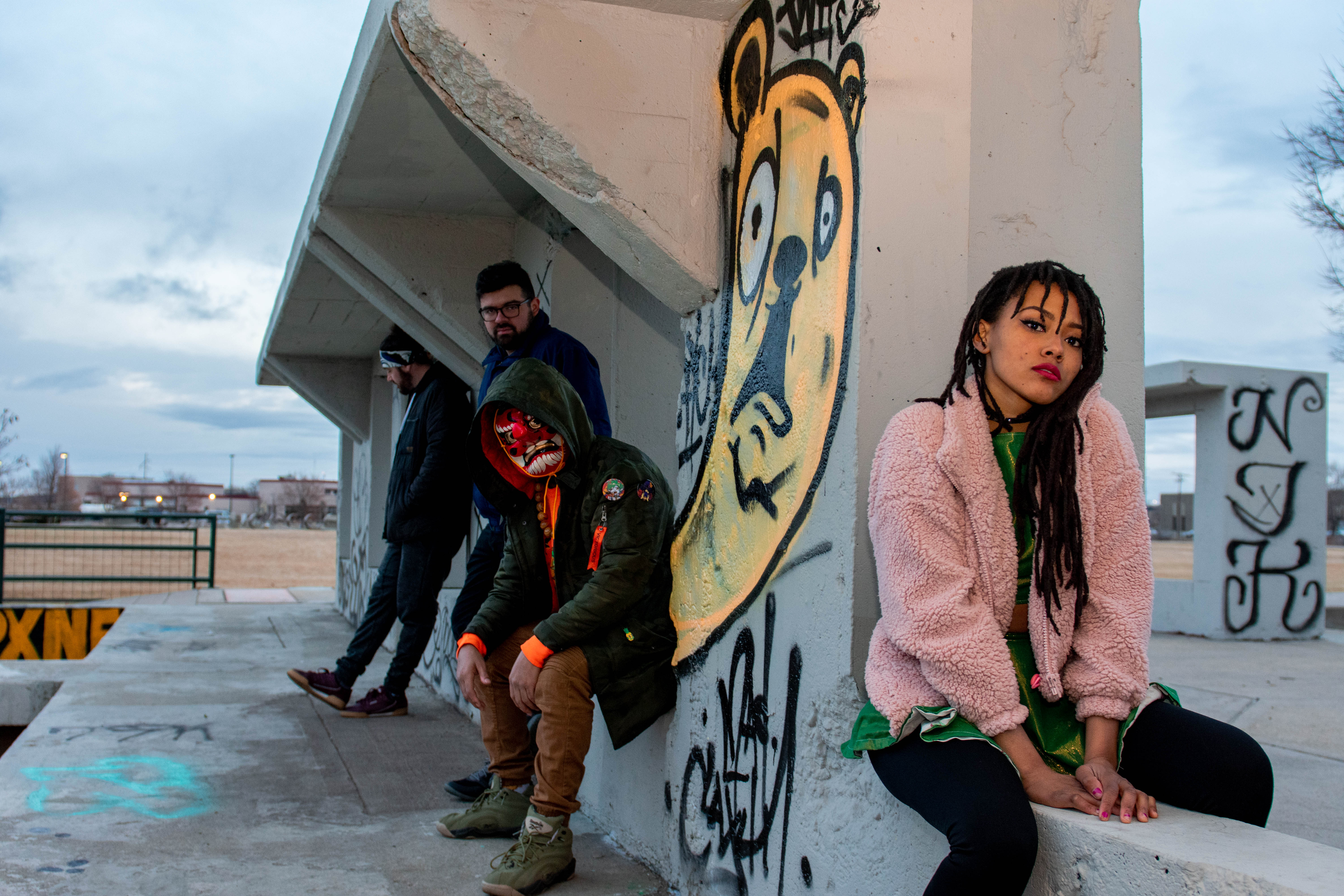 About a month prior, Nobahdee and Ness, who were playing in a band together at the time, crossed Ananstehzaa and her harp busking near The Cheesecake Factory, “anime-style” in cinematic freeze frames, before going on their separate ways. It wasn’t until Clato and Nobahdee linked up around an of-the-moment reggae project, that the pieces fell into place, and they discovered their shared mutual connection and invited her out to play. But, when that day came around, she “ghosted” them. Chalk it up to nerves or anxiety, but Nobahdee wasn’t having it, “I was like, we don’t have time for that.” Next time, she showed up and sat down, and as Nobahdee recalls, “it was like a wall of like ‘Holy Fuck!’ coming at you,” – the rest was history.

The result is a cosmic crevice split to its core, releasing a sound that is boundless. The band’s affinity for anime shows like Space Dandy and Nintendo video games feels more referential to their sound than any single music act. Their lyrics, evocative in their ability to raze and replace reality, zoom through galaxies of complex drums patterns, synths and harp strummed arpeggios. The need to have lyrics comes and goes, as does Annastehzaa’s voice, but the band works in an almost frantic compulsion to conjure an episode that plays out in real-time across each of their drastically unique sonic landscapes.

“Imagination is absent from a lot of music, in general, because there’s not a lot of imagination. My approach is to go back to being a kid and being like, ‘what the hell do I want my world to be?,'” remarks Nobahdee. “‘Adulting’ sucks, so how can we make our world what it should have been like?” 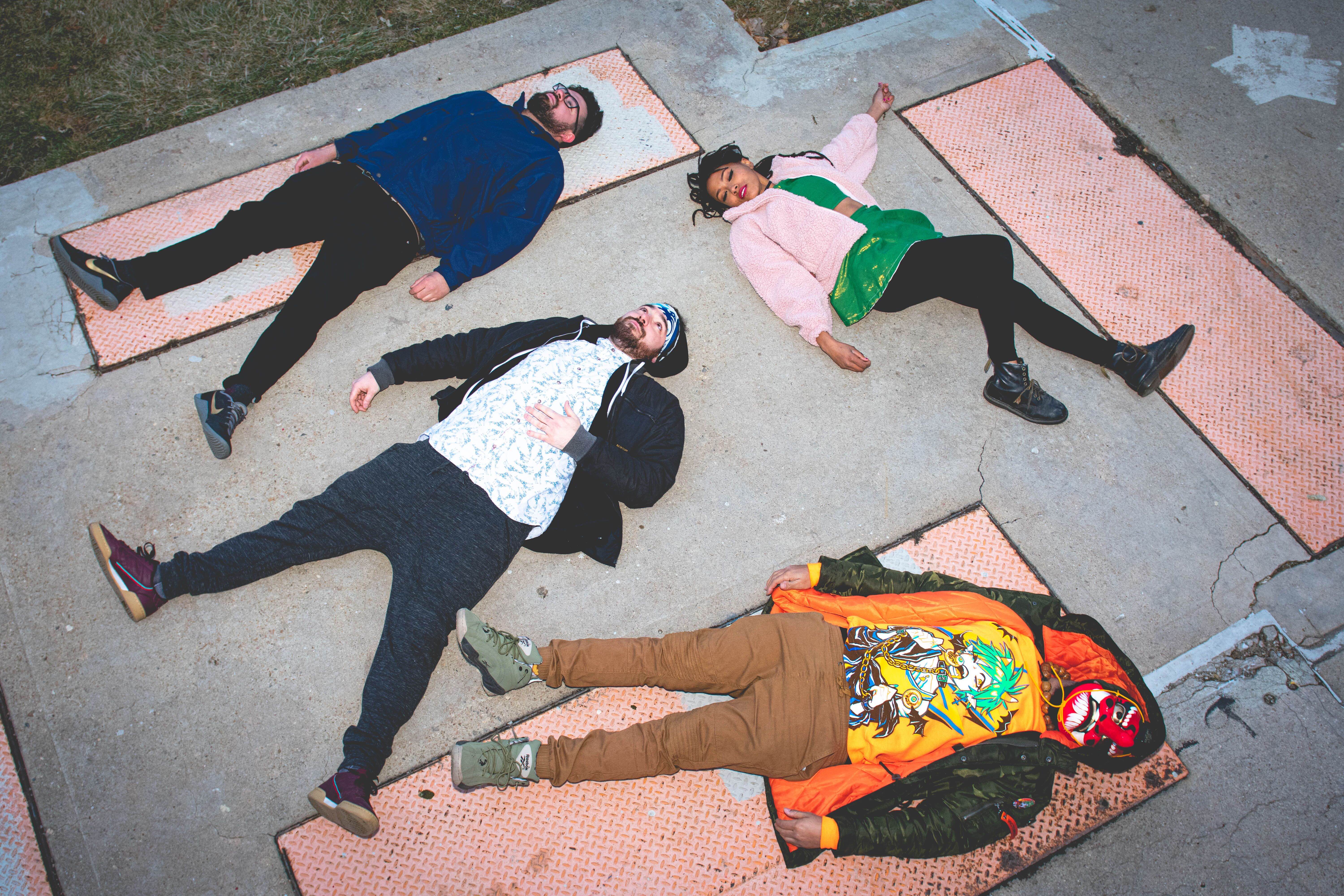 In creating that world they’ve envisioned, Ramakhandra’s rise has been nothing short of unconventional. The band has yet to release any music, but that hasn’t stopped them from nabbing coveted opening slots at some of Denver’s best venues and drawing a cult fandom from all corners of Denver’s music scene. While the spotlight so clearly shines upon the outfit, there’s a reluctance to stare into the bright light. In fact, at the center of the myth of Ramkhandra’s existence, there’s some serious musicianship that makes one wonder why a band so talented would use pseudonyms at all — and then there’s the mask.

“Growing up I lived with my grandparents, ” Nobahdee reminisces.  “My mom and I were very poor, but there was a time when my whole mom’s side of the family was under one roof. My grandpa was like my father because I didn’t have one, but he was my main inspiration for music. He’d come home from work and he was getting on the piano and that was my first contact with music. He would also bring home comic books. Spider-Man was the main one he’d bring home. As you know, the story behind that is with great power comes great responsibilities, but he also honed in on keeping his identity secret so he could live his real life. Before I got to meet everybody (in the band), my grandpa and I got a really bad fight and then I left the house. He passed so he never got to see me perform on the drums ever. He’s the reason why I play music, so I asked myself, how can I continue to give a tribute to him? I wear the mask because I’m trying to convey that this is who I am. For me, it’s very much in tune with the representation of this band. We just all want to be something original, but it has to be real first.”

Check out our 13 Denver Musicians to watch in 2020 featuring Ramakhandra.

For Ramakhandra, like the anime and animations that made them, the realness they seek comes from the art first and foremost, and their identity as creators second, or in their case, not at all. This is where the band’s sense of duty is most evident. 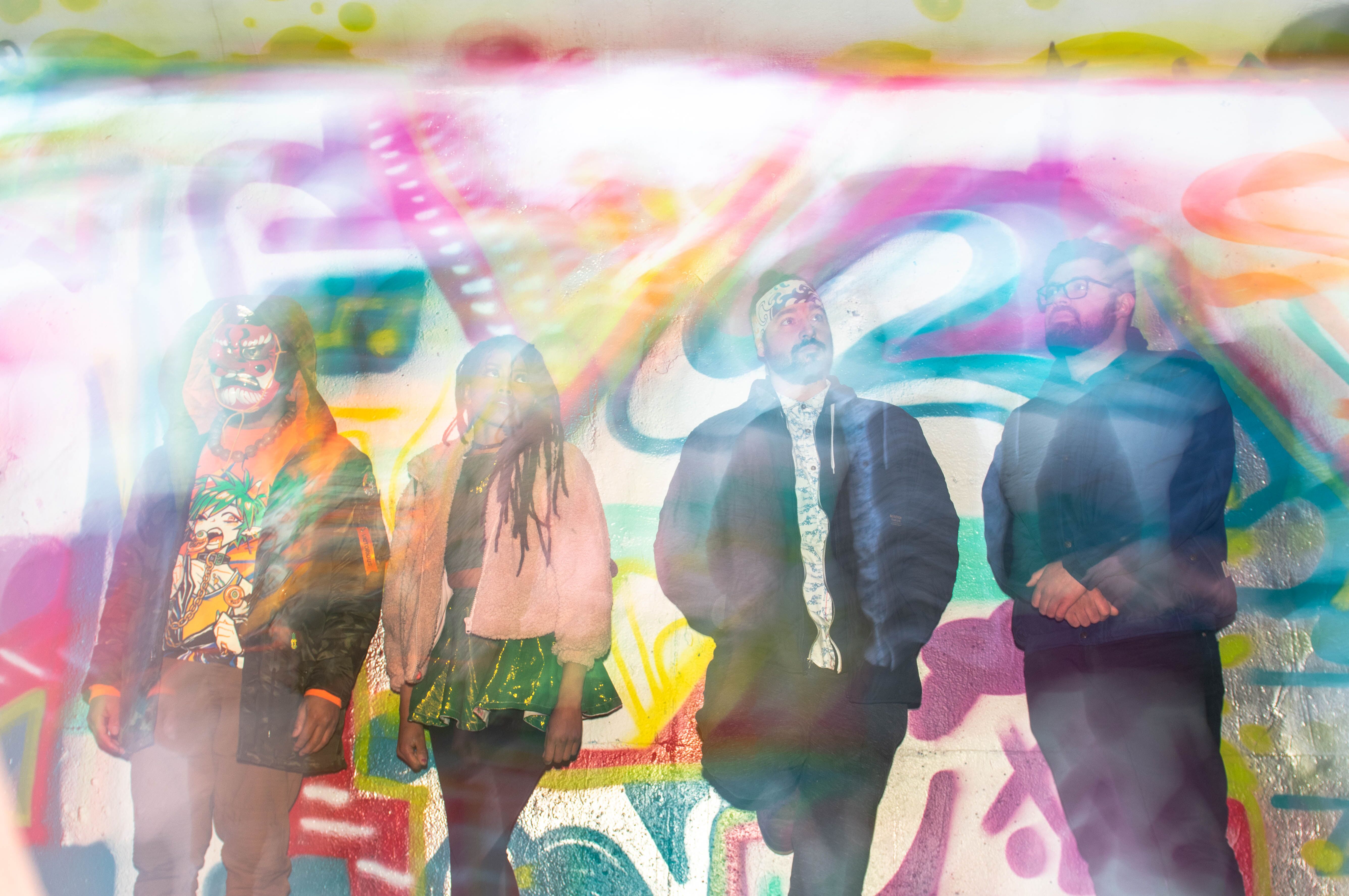 “I really don’t want to be a novelty act because it’s crazy and it’s different,” says Annastehzaa. “The story is extremely perfect to me, but I want to make sure that it’s a genuine expression of our tastes and interests and everything of who we are.”

For their part, Ramakhandra is simultaneously everything and nothing at all. They’re a reflection of the past and present, their influences and their upbringing. As people, they only exist as passerby’s, background characters in someone else’s video game. They are a singular entity by way of artifice, using their imagination to figure out how the things around them relate to one another. Drawing inspiration from the world and taking it apart at their own leisure comes with great responsibility as was told to them once by a friend.

Their music is the world distilled, spilled upon the pavement in reverence.