Dine Under the Stars Is Coming to Denver This Spring

[UPDATE: Dine Under the Stars has filed for bankruptcy. According to the company, you can file a claim for a refund with their appointed bankruptcy trustee. Visit their site for more info.]

Although the saying that Denver gets 300 days of sunshine per year seems to be based more on myth, dining al fresco in the Mile High does prove difficult in colder, snowier spring months. Leave the Canadians to change that.

The Montréal-based, traveling dining event company Dine Under The Stars will stop in Denver in 2020 from April 1 through April 30, and hopefully again on undetermined dates this fall. Twenty garden domes will be constructed at the Denver Botanic Gardens’ Chatfield Farms location in Littleton near the restored, 1918 dairy barn Hildebrand Ranch in order to offer guests an intimate, four-course outdoor dining experience that doesn’t depend on the weather.

Each geodesic dome can seat up to six people and will be completely weather-resistant with a heater and blankets for colder days and a portable fan for hotter days. According to the owner/partner of Dine Under The Stars, Ryan Wibawa, the event takes place in the spring and autumn in cities where colder climates keep people indoors. The decision to stop in Denver wasn’t difficult.

“It has to be a place where winter is a little bit harsh,” Wibawa said.

The venue at Chatfield Farms, in particular, was exciting for the Dine Under The Stars team due to the mountain backdrop.

“The Denver location is absolutely fantastic. It’s very rare in life you’ll find the opportunity to sit under a dome and actually eat with the mountains in the snow or rain,” he said. 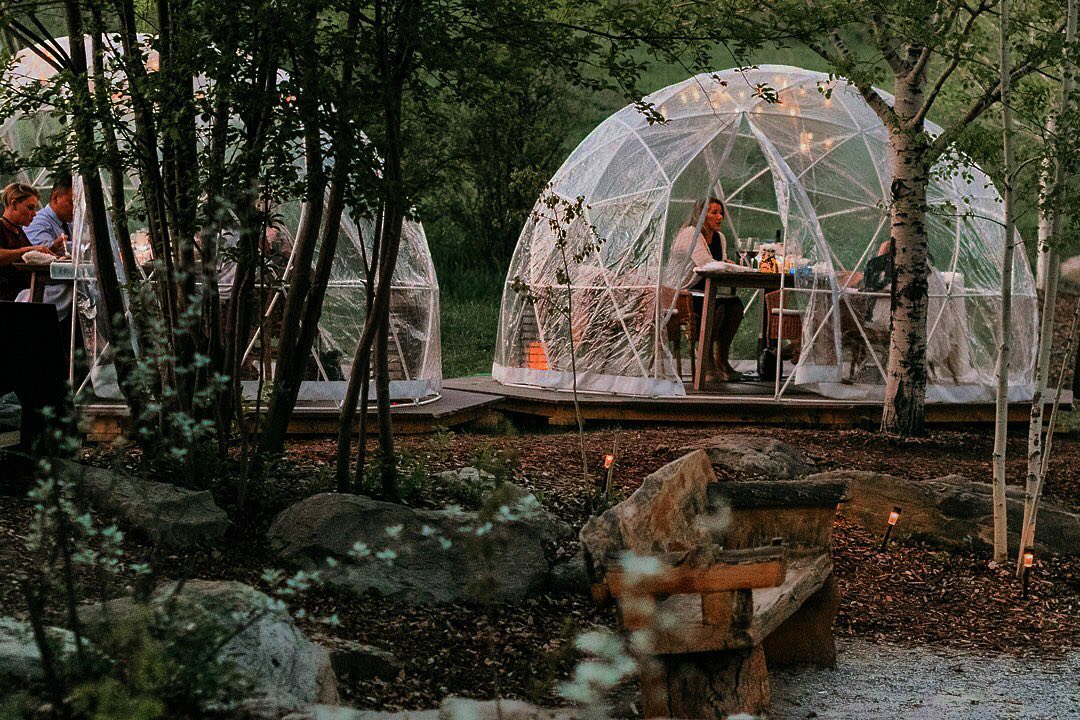 Denver’s growing culinary scene also made the city attractive to the event company, although making plans to stop in the Mile High City has been more difficult than usual due to regulations on obtaining a liquor license.

“It’s a little unnerving because we’ve never seen that before,” Wibawa said. “It’s been a little more challenging, but we really wanted to make it work because of the particular venue we have. It’ll be worth it when we’re eating and looking at that mountain.”

Wibawa, who previously owned nightclubs and restaurants and launched two similar event dining companies called Dinner for Four and Dinner With a View, is no stranger to hosting lavish dining experiences. But he says Dine Under The Stars is a bit different than his other ventures. The concept for the outdoor dome dining began when Wibawa changed his perspective on dining out.

“In this Instagram generation, people aren’t just going to a restaurant to eat. People are going to restaurants for the experience of going out. We wanted to use that concept — this idea that people are going for the sake of taking pictures of their food and friends and having a reason to step foot out of the house,” Wibawa said. “With social media, dining has now become this whole experience and so the venue has to take it up a notch. We have to step outside of the box, and in order to step outside of the box, we need to actually step outside of a restaurant.” 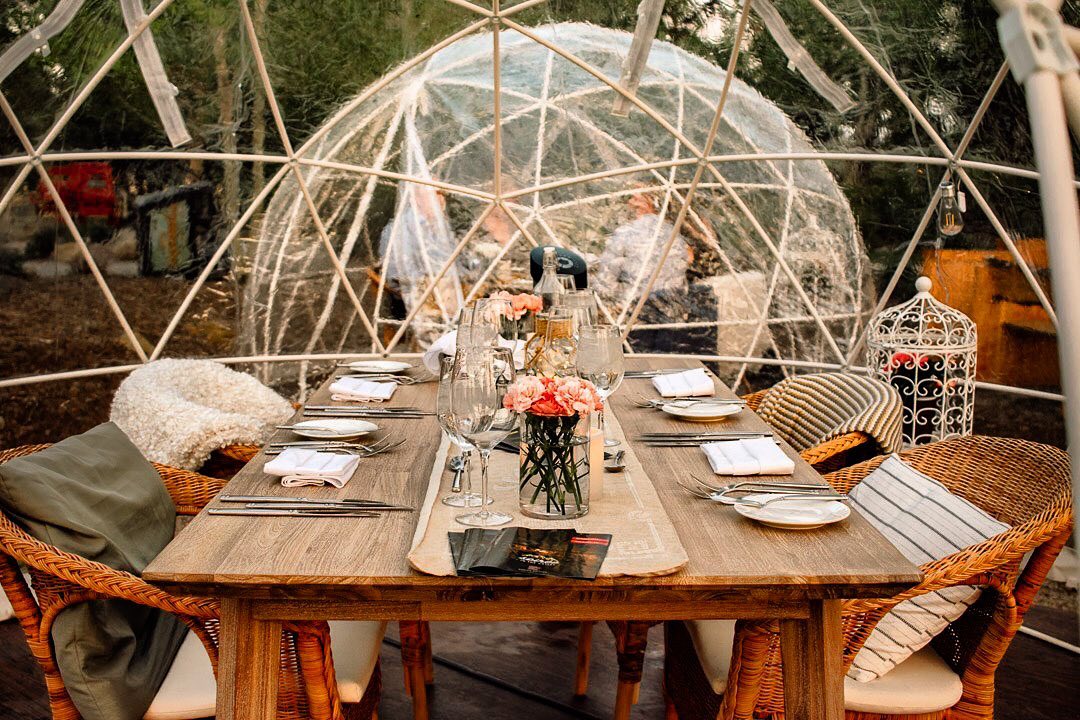 The domes might be a good reason to step outside of the house, but they are actually designed to feel like home.

“Once you get inside these domes, you don’t want to feel like you’re outside anymore. You want to feel like you’re in the warmth of your home. The domes have indoor laminated hardwood floors like you would have in your living room. The dining table is not an outdoor dining table. It’s one that you’d have in your dining room,” Wibawa said. “You get this really homey feeling. There are blankets. You feel like you’re inside a private little home with you and your favorite people. It’s heated, it’s warm and it’s a good time.”

According to Wibawa, the goal of Dine Under The Stars isn’t really to see stars as the name suggests, but rather to enjoy the surrounding natural environment and indulge on delicious cuisine with friends and family.

Although the event largely focuses on the atmosphere, Wibawa promises quality food and drink are also top priorities. The four-course meal will include an appetizer, two main entrées and a dessert and accommodate any dietary restrictions and allergies.

Wibawa says the chef and partnering catering company will be announced by January 21, and that unlike most traveling event companies, Dine Under The Stars is completely devoted to providing locally sourced cuisine.

“It is a local chef, it is a local [catering] company and there’ll be an emphasis on local, homegrown, organic food. We only bring in local chefs. We bring in a celebrated chef from each city. It’ll be a chef from Denver,” Wibawa said. 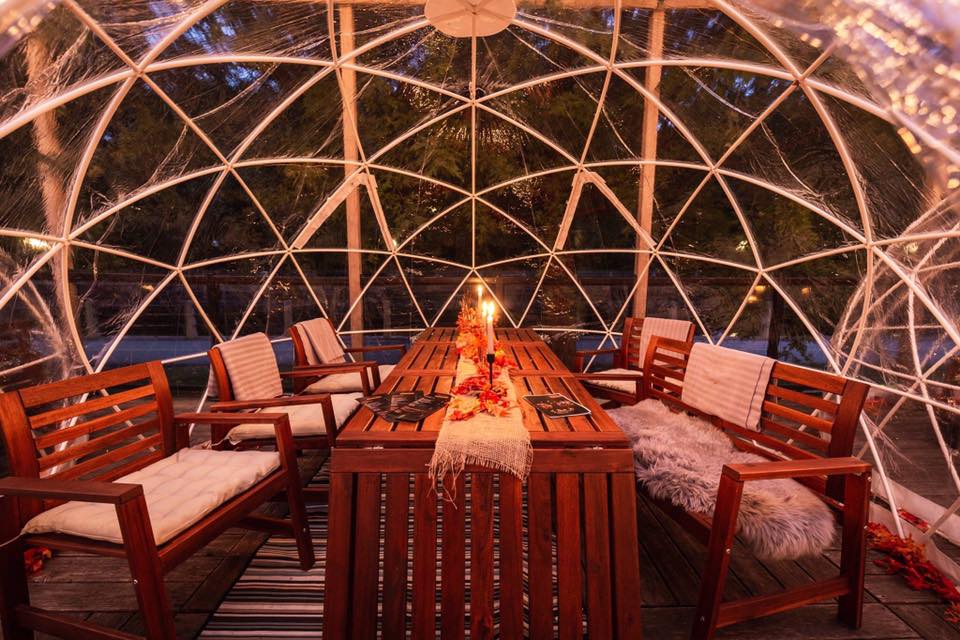 There aren’t any clues as to who the chef is yet or what’ll be on the menu, but Wibawa says Dine Under The Stars searches for talent based on professional food critic reviews, photography, restaurant reviews, blogs and other online mentions. Although Wibawa is unable to sample each chef’s food individually, he says popularity is of utmost importance.

“Eating someone’s food in person isn’t really a good way to tell if they’re a good chef or not [for Dine Under The Stars]. What I do know is that the people who have experienced it before — if they’re going out of their way to rave about it and the food looks presentable — chances are that person won’t disappoint,” he said.

Chefs must also have the ability to prepare dishes that accompany a wide variety of taste preferences in order to be considered.

“We do not choose chefs that are nationally or regionally inclined. That’s a disqualifier for us because we’re trying to include everybody. You cannot hope that everyone is going to like Italian, Mexican or Thai food. Although all those things sound fantastic, they just won’t please everyone. We take a mainstream approach. We don’t like to put national or regional twists on food,” Wibawa said.

For the month-long event, the selected chef will have the option to prepare a rotating menu.

“The food changes. What the chef cooks on week one might not be what he or she cooks on week two. We try to stay with what’s good at that very moment in that city. It’s not possible to anticipate what the menu will look like,” Wibawa said.

Guests will just have to be surprised. 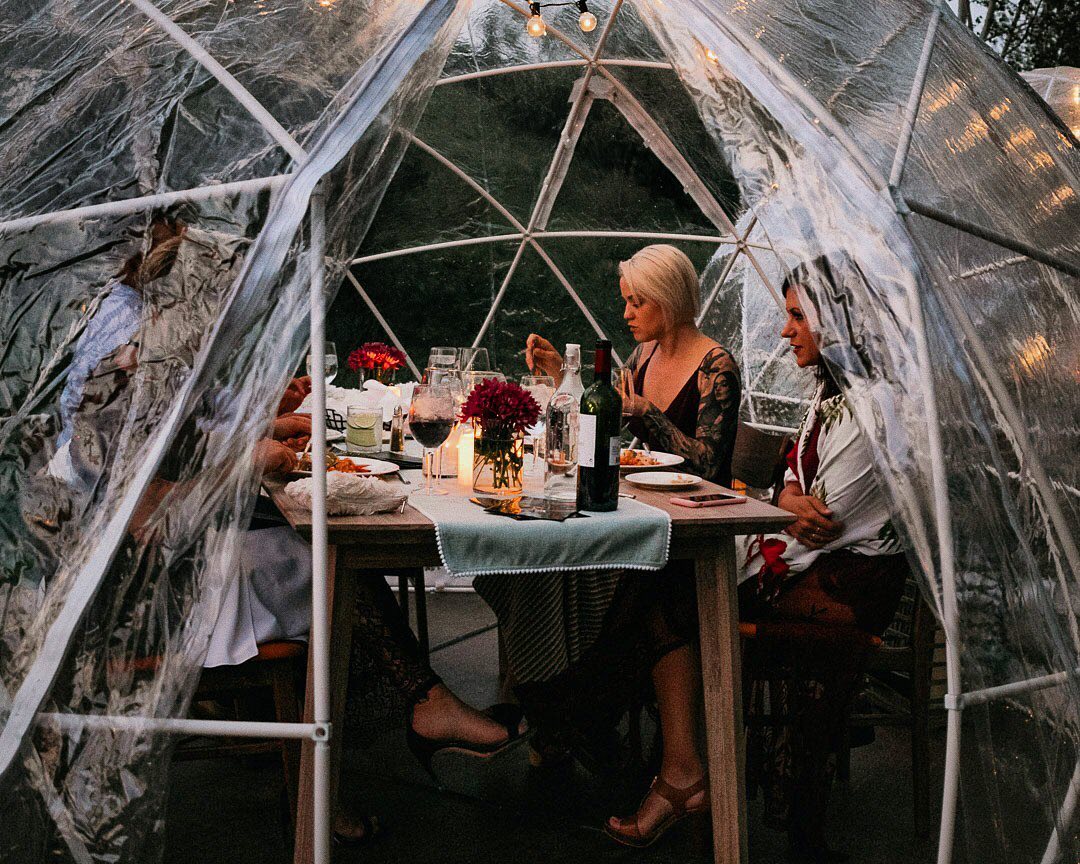 Dine Under The Stars will be located at the Denver Botanic Gardens Chatfield Farms at 8500 West Deer Creek Canyon Rd., Littleton, CO 80128. The spring event will run from April 1 through April 30, 2020, with reservations at 5, 7 and 9 p.m. Each reserved dome will be $90 and seat up to six people at $76 per meal. Make reservations here.

Correction: the article was updated to change the reserved dome price from $45 to $90. By using an online promotional code, domes can be reserved for $45. This price does not include tax and convenience fees.