All photos courtesy of ColoLocal

Did you know that The Lumineers’ former cellist, Neyla Pekarek, found inspiration for her first solo album at the Greeley Historical Museum, where she encountered a dress made of rattlesnake skin? That Gordon Gano, the lead singer of the Violent Femmes, lives in Colorado and toured with the Denver-based tribute band, The Dirty Femmes? Or that Brianna Straut, the 2019 winner of Westword Music Awards’ Americana category, got her start playing the saxophone? These and countless other unique stories about music in Colorado are there for you to discover within episodes of the ColoLocal podcast.

The podcast’s recently completed first season features eight engaging guests, all of whom have garnered rather illustrious reputations within the local music scene. Sugar Britches, Jen Korte (a.k.a. Lady Gang) and Chella Negro are among its visitants.

Each hour-length (give or take) episode consists of 30 to 40 minutes of conversation between the artist and Jeremy Gee, the host and driving force of ColoLocal. During natural breaks in the discussion, the artist performs their tunes live on the podcast, which Gee also films and uploads to YouTube.

At least half of ColoLocal’s season one guests played songs they hadn’t released — and in some cases, hadn’t even titled — at the time of the episode’s airdate. “I said to the artists, you know if you want to come on the show and do something different, like bring in an extra instrument, or do different instrumentation on something, by all means,” said Gee. “Neyla Pekarek played a song that she had never played live before. Larry Nix did too.”

Gee developed the idea for a locally based music show shortly after co-producing Sounds Like Colorado, a documentary that chronicles the adventures of five Front Range bands within a year. They pitched ColoLocal to their collaborator on that project, Toddi Norum, who is now the podcast’s executive producer. “I’ve been fortunate to stay on the fringes of the [music] scene enough to be able to make an impact at this point with a show of my own,” Gee reflected.

Gee moved to Colorado in 2008 to attend the University of Colorado Denver (CU Denver), and since then has worked as a lighting technician and video producer for a number of local and national projects. As an undergrad, they went on the road with Whiskey King Coalition and Carolina Story to make a documentary of their Southwest tour. Today, ColoLocal benefits from Gee’s experience in the music industry as both a professional and a dedicated fan. 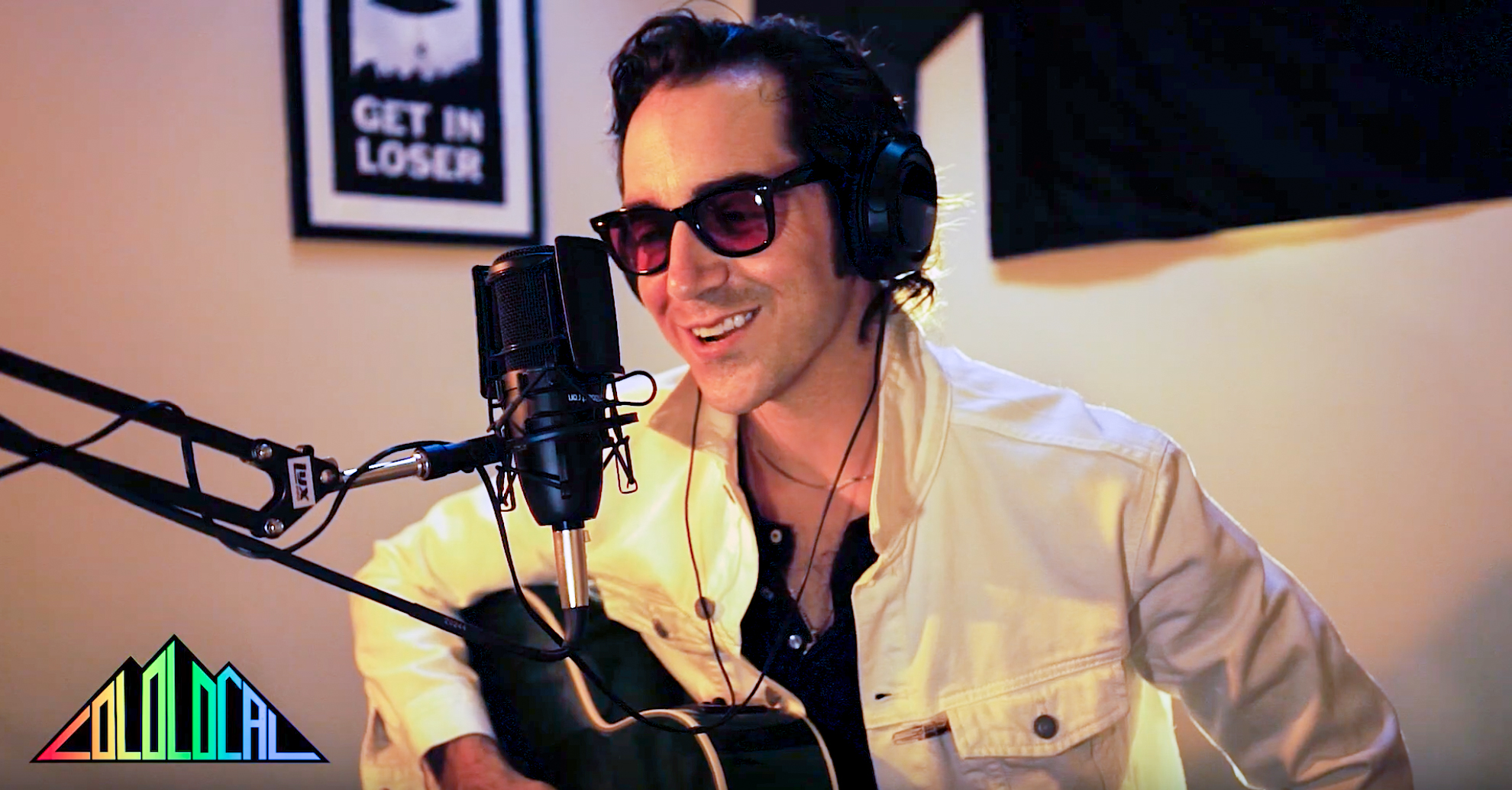 ColoLocal’s debut was a live event launch held at Purpose Brewing last year during FoCoMx, Fort Collins’ annual music festival. Sarah Slaton and Justin Roth were its musical guests. With the help of famed director and videographer, Ian Kellett, Gee live-streamed the event on Facebook. The number of people who tuned into the event — both in-person and digitally — was enough to convince them to move forward with the project.

At this juncture, Gee and their team got clear about what they wanted out of this. “We wanted interview musicians who have good stories to tell, and we wanted to feature them in an efficient manner, and on a budget. A podcast, frankly, is the best way to do that,” Gee said. “It doesn’t hurt that it’s a medium that a lot of people are tuning into right now. It’s a very accessible medium, and we didn’t want to get hung up on the production. We wanted to get these stories out into the world as fast as possible.” 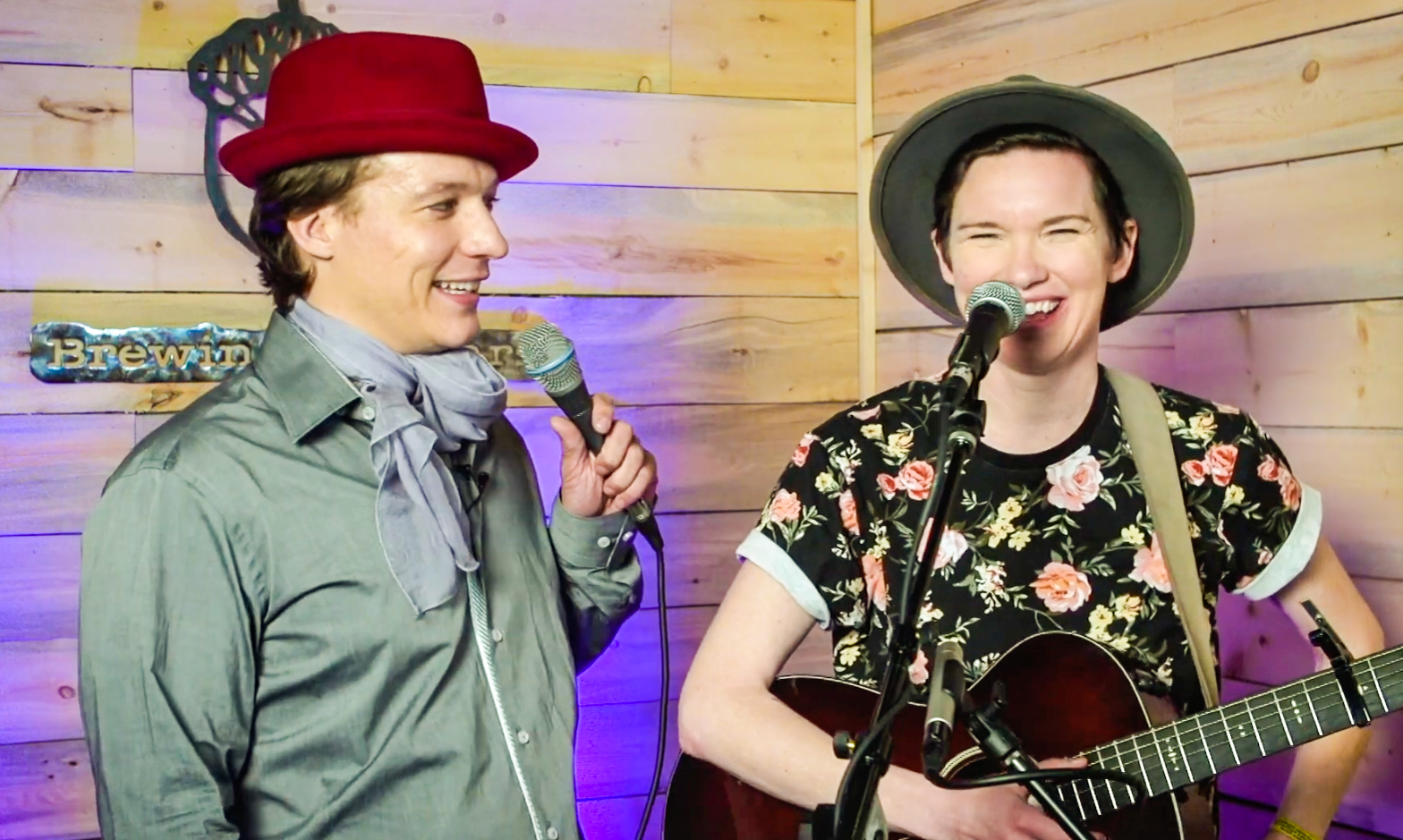 ColoLocal records out of the Creative Density podcast studio in Denver’s Capitol Hill neighborhood for $15 an hour and the team carves out these hours from busy schedules. Everyone involved with the podcast’s production has their own separate career. Gee is a full-time electrician. Their partner, Anisetta Valdez, co-edits the podcast and is a full-time employee at The Market on Larimer Square, where Gee and I met on a Monday evening after a nine-hour workday.

Currently, ColoLocal doesn’t bring in any revenue from podcast streams. “We are 100% free to the public and completely unfunded — or 100% self-funded, I should say. Eventually, we hope that this is funded in other ways,” Gee noted. They’re working on setting up a website and a listener subscription or donation button for the start of season two, which Gee projects will air in March or April of this year. Ultimately, Gee expressed, “It’s a passion project and remains a passion project.”

Gee certainly fills the studio with a kind of passion you can hear. One of the podcast’s strengths is that its correspondents delve into more weighty, complex topics than they do on other platforms. Part of this is due to the general nature of podcasts, which allow for lengthier, more explanatory discussions. Mostly, though, it’s because ColoLocal’s guests are comfortable being themselves around Gee. They trust Gee with their stories. 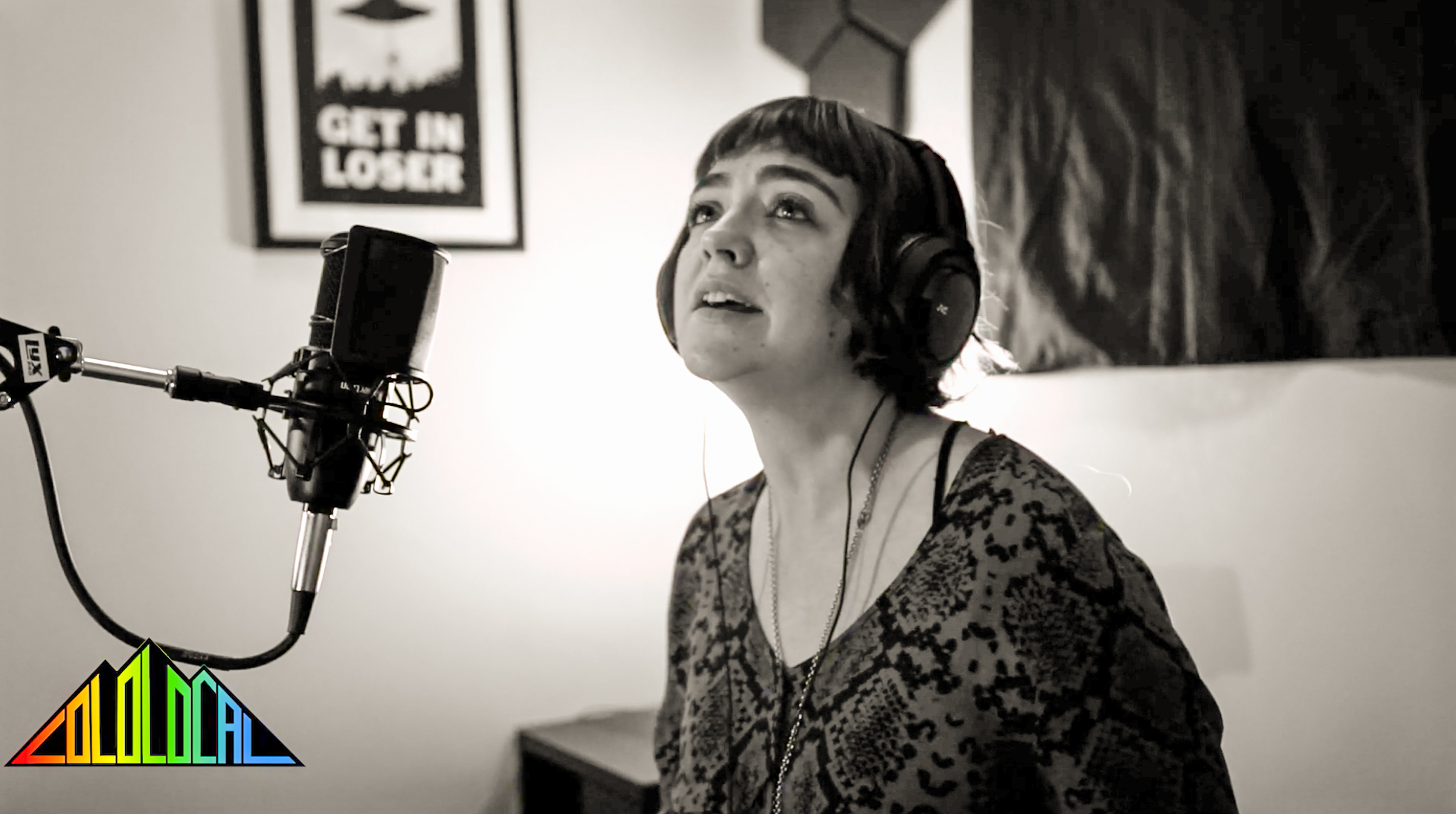 When asked about the role of ColoLocal within the music scene, Gee responded, “I don’t think that you can ever give your local artists enough opportunity to voice their opinion. Especially in a market that seems to have as much affluence and buzz as Colorado — Denver in particular — and yet the local artists don’t seem to have a very large slice of that pie. That’s something on the podcast that I’ve discussed with a few artists.”

Guests on the show broach many other nuanced topics, such as the industry’s increasing reliance on streams and follower counts to measure artistic talent, the ideal consumer-artist relationship and the gender disparity in pay as experienced by female musicians. The latter, Gee said, sticks with them every day. “It’s not something I have the answer to, but giving voice to that type of stuff is something that I’d like to do, and I think I’ve helped to do and would like to continue to do.” 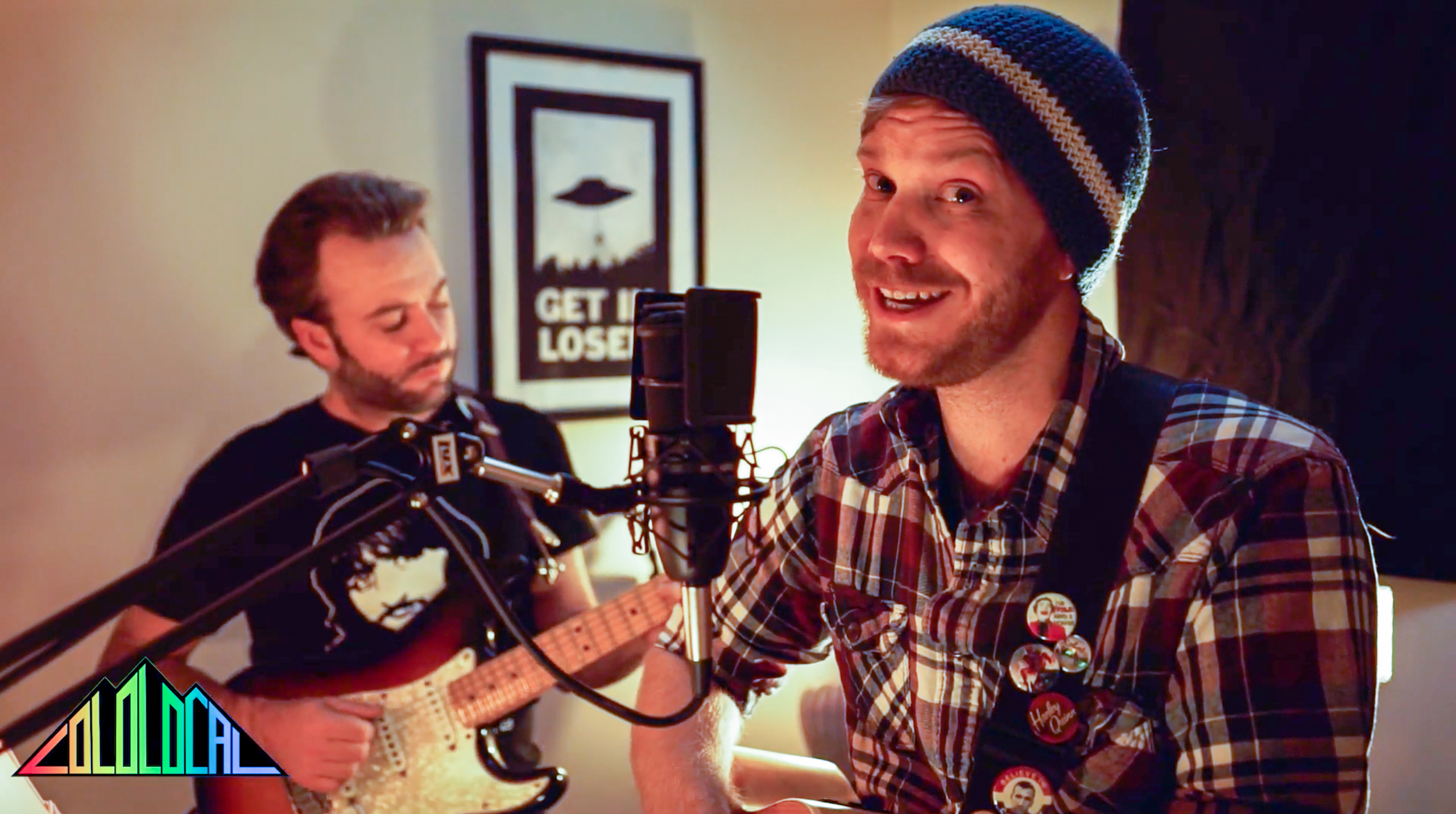 Sugar Britches sharing their music live on the podcast

After listening to artists telling their stories on ColoLocal, it’s natural to want to reinvigorate yourself into the local music scene. Luckily, Gee has some advice for folks looking to do just that.

“Start with your local pub, brewery or venue — Herman’s Hideaway, Broadway Roxy, Ophelia’s or a café, stuff like that. Go in there on a Friday or Saturday night and just talk to people. Talk to musicians. If you like one musician, go and talk to them, and they’ll recommend another one right away,” Gee said. “One of the nice things about this community, actually, is that for the most part, I think everyone seems to uphold each other and recommend each other. It’s a very collaborative effort.”

You can listen to ColoLocal on Apple Podcasts, Spotify, Google Play and Podbean. Be sure to follow their Instagram for updates.