Show You Should Know – Part & Parcel Party for Charity

The fourth annual Corduroy Classic from up-and-comers Part & Parcel returns to the Cervantes’ stage on Friday, November 8 with a spectacular lineup of local musicians. P&P mandolinist Mark Pietrovito and resident goofball boasts that it’ll be “a night of music and shenanigans,” which will undoubtedly be the case knowing this wild crew. As the event’s host band, Part & Parcel have rounded up some close friends and musicians to help them throw a raging party, which for the past three years has been pulled off victoriously. 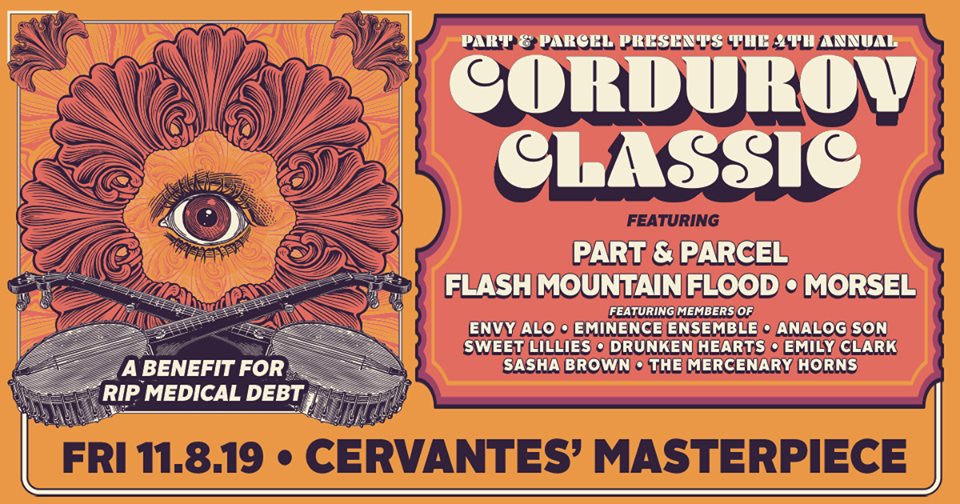 For the 2019 edition of the Corduroy Classic, Part & Parcel have curated their lineup quite beautifully. Kicking off the evening is jamgrass group Morsel, a band that Pietrovito described as “awesome, the nicest group of dudes in the business,” and expects to be hearing their name a lot more in the near future. Plus, their band interests are listed as “mischief” and “shenanigans,” so they’re a natural fit to the bill.

Following them will be Flash Mountain Flood, which in Pietrovito’s own glowing words are “a staple of the Boulder music scene.” Surprisingly, this will be the first time Part & Parcel has shared the stage with Flash Mountain Flood, and this upcoming collaboration is a very long time in the making.

Next up will be one set of music from Part & Parcel, with guest sit-ins from guitarist Kevin Hinder of Envy Alo and the Drunken Hearts’ Cody Russel on pedal steel/banjo, where they’ll be “debuting some new ones and playing some of our favorites as well.” The last and final set of the evening will be from the Corduroy Classic House Band, which includes a laundry list of kickass local musicians — members of Part & Parcel, Envy Alo, the Drunken Hearts, Eminence Ensemble, the Sweet Lillies, the Mercenary Horns, and many more. They’ll even have former bandmate P&P co-founder Brandon Jay participating in the festivities, both onstage and off. And just in case that list isn’t impressive enough for you, P&P has arranged surprise guests for this final set of music as well — you’ll have to wait and see.

Though the music is great, what’s even better is the charitable aspect of the annual Corduroy Classic. The event is a non-profit, with ticket sales going back into the community and serving those that are less fortunate. Generously sponsored by Odells Brewing Company and Fire on the Mountain, Part & Parcel is able to help those in need heading into the holidays.

The band has teamed up yet again with RIP Medical Debt, a non-profit organization that purchases medical debt for cents on the dollar. “They then forgive the debt, alleviating financial pressure for families in need. Each dollar donated is roughly equivalent to 100 dollars of medical debt forgiven.”

Across the last three years, the Corduroy Classics have forgiven over 200 thousand dollars worth of medical debt, and Part & Parcel is “really looking forward to making an impact this year.” So slap on your head-to-toe corduroy and join P&P and all of their many friends and musical peers for a night of goodwill and debauchery, an odd pairing that has worked very well for three, going on four, years.