From the beginning, Lady Justice founders Betsy Lay, Kate Power and Jen Cuesta wanted to bring together their community with great beer and a mission for social good. The trio has been successful since the start, sharing their deep passion for public service, community, and drinking beer with their supporters.

Focused on women-centered organizations, Lady Justice donates all proceeds over cost to organizations that promote and support Colorado women and girls. They follow a community-supported brewery model (CSB), but also make beer to serve in a taproom once a week. 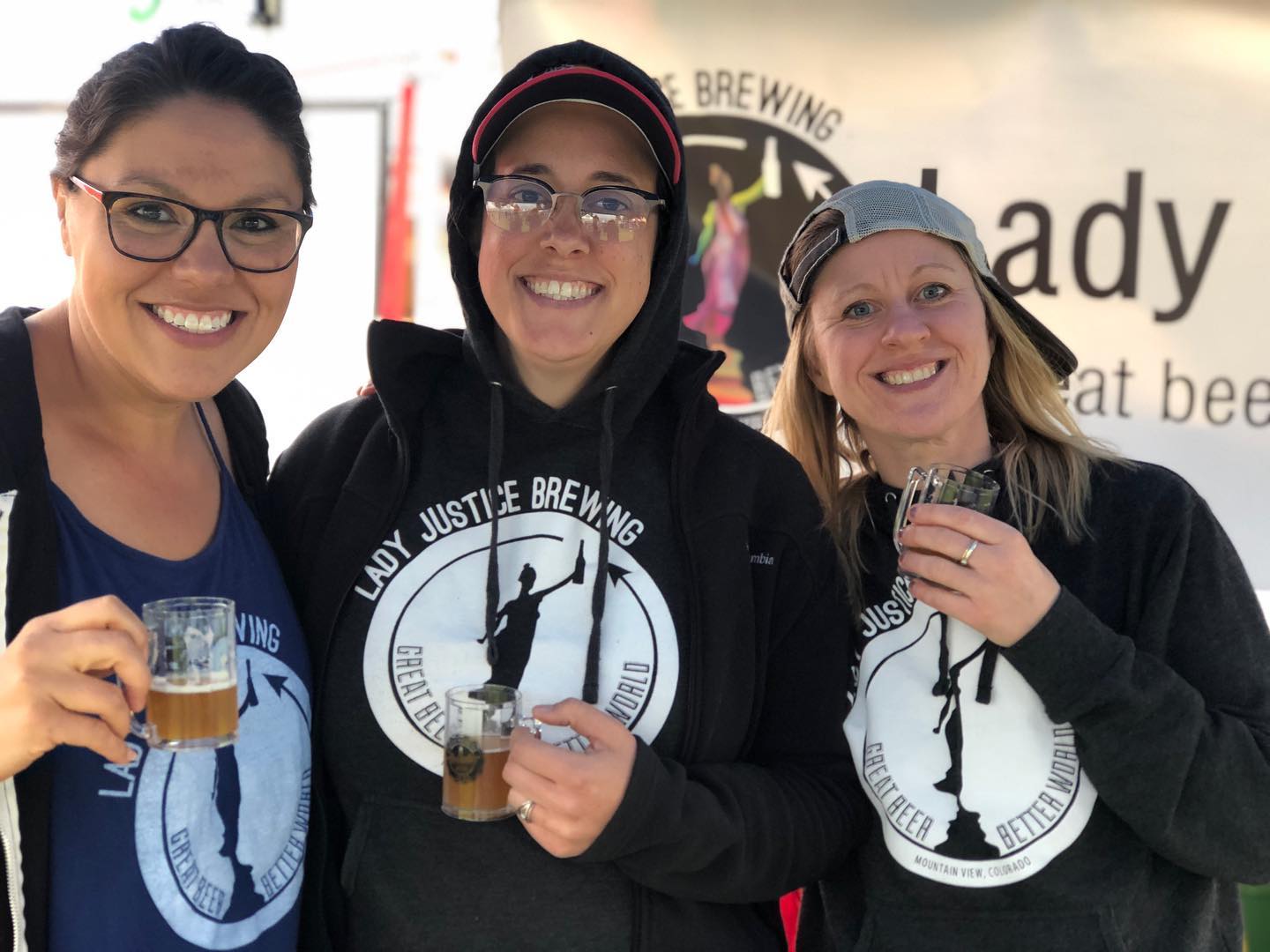 Cuesta, Lay and Power met in 2009 when they were in AmeriCorps together in Arvada. Though the trio was each making only about $10,000 a year, they spent a lot of downtime drinking beer at Vine Street to unwind. And it was there that the idea for Lady Justice brewing was born.

They wanted to drink beer and make the world a better place while doing it. Ten years after the initial vision, the trio has been living out that dream in the Denver Metro area. The women of Lady Justice describe it as a hybrid for-profit and nonprofit, a philanthropic brewery.

Each founder feels that their success in life is due in large part to the women in their lives that propelled them forward. After working in AmeriCorps, which “aimed to honor women doing really special work in the world,” Lay explained, they decided to focus on offering a similar support system to women and girls in the area. All proceeds above cost are donated to various organizations – including World Hoops Academy, Love146 and Women’s Lobby of Colorado – or individuals waiting to get involved in an empowering organization or summer camp session.

Their donation and grant process has evolved with the business. The first year, Lady Justice profited around $900 – a success considering most businesses end their first year in debt. The brewery opened applications for grants and selected a handful of recipients to receive a small donation from Lady Justice Brewing. Their favorite application by far, they agreed, was a girl who wanted to go to a basketball camp to learn leadership and teamwork skills that would help her get along better with her brother.

Lady Justice Brewing started in a rented room that measured 332 square feet. While the small space had its challenges – like fluctuating temperature – it allowed for the CSB members to experience the brewing. Each month, members got a crowler of beer, and when they picked it up at the brew room, the founding trio would brew the next month’s beer. Members often brought their children or dogs and stayed awhile, and slowly the members and the founders got to know each other.

Realizing they needed more room to grow, Lady Justice Brewing said goodbye to the brew closet and moved into Factotum Brewhouse. The ladies and a few volunteer bartenders took over the space on Sundays, and the taproom quickly became a hangout spot for all Lady J fans. Lay describes the atmosphere of Sundays well, “There was this day where every single seat at the bar was occupied by CSB members . . . so Sundays sorta became the time when people would just plan on [going] to Lady J so they could see each other and hang out.”

Now Lady Justice highlights a couple of organizations at the beginning of each brewing season. Members of their CSB (similar to a CSA) know from the beginning who their money is supporting, and they get to know the organization at events throughout the season. “I like to be able to use our little platform to give them a new audience,” Power commented.

“[Our supporters] would drink beer anyway . . . but they’re choosing to drink our beer, I think for two reasons. One: they like it and two: they like the mission,” Lay explained. But their beers do more than support a good cause. The three founders – with the occasional help from brewer Aimee Soete – are likely the most female-concentrated brewery in Denver. In a male-dominated field, it’s impressive that Lady Justice is run by a team of women – and that all four know how to brew a good beer.

“We like to have fun with our beer,” Lay said. “Careful fun,” Power clarified. They aren’t afraid to try something new, like a cardamom-spiced porter or aging in a red wine or tequila barrel. The brewery also brews by commission either for weddings, social justice organizations or movie theaters. It was through a recent partnership with Alamo Drafthouse that Lady Justice got into the business of making glitter beers. For Pride month, they worked with the Transformative Freedom Fund to create a strawberry, lime and poblano beer that sparkled with both silver and gold glitter.

Thanks to their adventurous brewing – and their community – Lady Justice Brewing has donated about $10,000 since the start. The founders are quick to credit each supporter of the brewery – whether someone bought one beer or a person has been a CSB member from the beginning. “Even if you bought a CSB membership every single time, you would have spent about $300 [or] $350,” Power explained. “So [with] the community coming together, your [$300] dollars in three years of memberships actually really contributed to $10,000.”

Last month, the trio decided to move out of Factotum and pause brewing to figure out their next business move. “We’re at this point where it feels like people are ready for us to be bigger than we are,” Lay said about their decision. All three still hold full-time jobs outside of the brewery and want to spend focused energy on deciding how Lady Justice can continue growing and make a bigger impact.

“One of the funny things that I think about growing is how do you keep that sense of community and that very genuine connection?” Power mentioned. It doesn’t appear that Lady J has ever had a problem with rallying support and sustaining a genuine community – even as fans leave the state. Love for Lady Justice beer ranges across the country as Cuesta, Lay and Power’s friends and family rep the brewery with shirts and stickers. And when two fans meet outside the state of Colorado, the founders always get a text telling the story of how wide the support for Lady J is, and just how small the beer world is.

“Dreamworld – if Lady Justice were huge,” Lay explained, “I would still want anyone who walked through the doors to feel at home.” Whatever the trio decides to do next, creating a welcome space for people of all backgrounds to drink beer is a guarantee. In the meantime, Lady J fans can stay in touch through a few special events like happy hours or donation drives. Cuesta, Lay and Power don’t want to leave their community without opportunities to come together as they plan what’s to come next.

At the end of the day, Lady Justice’s founders are always grateful for their community and credit their supporters for their ability to make a difference in people’s lives. Now, “something as simple as drinking a beer can have a huge impact on [our] community,” Lay commented. “It’s because our beer drinkers want to help our community that we’re able to do what we do,” she added.

All photography courtesy of Lady Justice Brewing on Facebook.