When attending “The Night Running Tour,” the night is more a marathon than a sprint. With a stacked lineup that includes Spoon, Cage the Elephant and Beck – all in one night – it’s important for concertgoers to pace themselves. One high-energy act after another, each with hits that you can’t help but dance to, could easily exhaust the average person. But not the crowd that filled Fiddler’s Green Amphitheatre on a Tuesday night.

As concert-goers began to enter the venue, Starcrawler played their last show with the tour here in Denver. The punk-rock band from Los Angeles may be young, but are already known for their Ozzy Osbourne-like antics on stage. Lead vocalist Arrow de Wilde spent the set stumbling around onstage and smearing paint across her dress and face, her tall, lanky frame making it seem inevitable that she would trip over a cord at some point while singing “She Gets Around.” 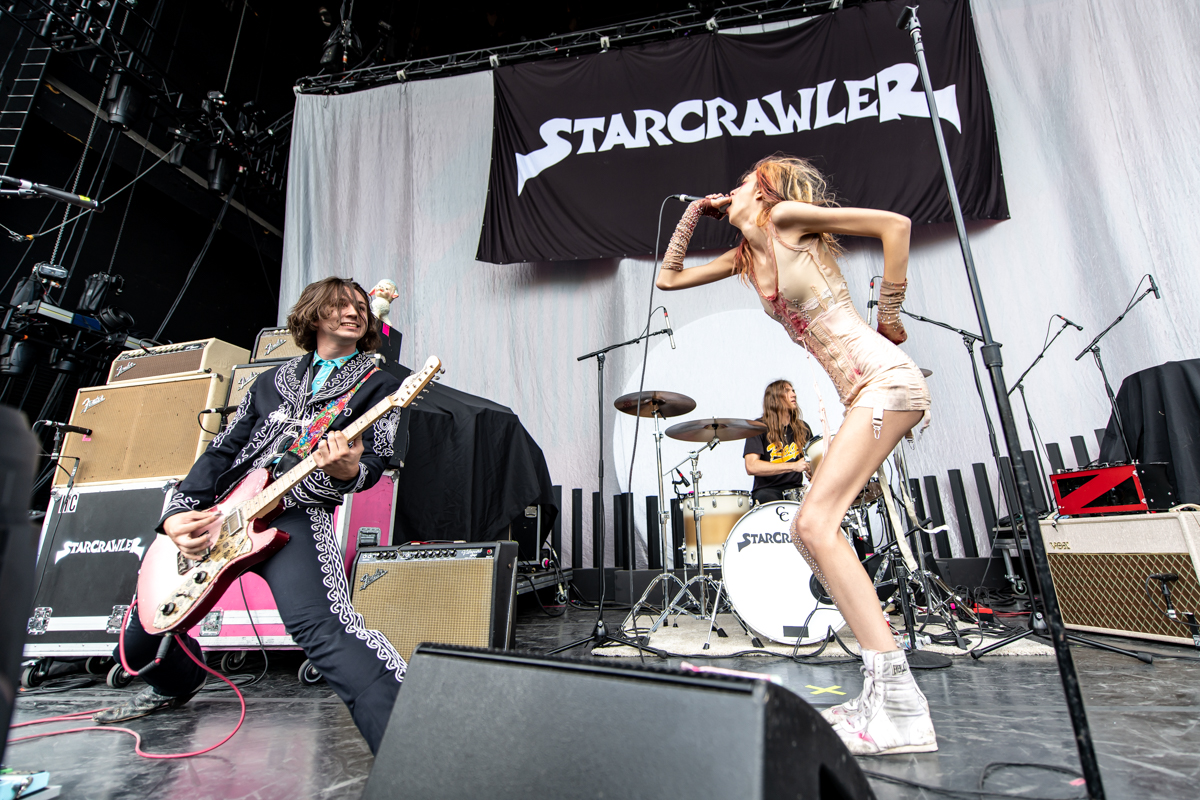 Closing their set out with “Chicken Woman,” de Wilde stayed true to the band’s name when she crawled over the stage barrier, into the crowd and allowed a man to cradle her before she crawled again, across the front row to the side entrance of the stage. Before she disappeared behind the stage, she dipped her hands into a cooler being used to keep the security staff hydrated, flinging ice cubes and water into the crowd.

Spoon took the stage after Starcrawler, and by the reactions of many in the filling-up crowd, this was the act they came for. After “No Bullets Spent,” frontman Britt Daniel paused to point out familiar faces in the audience. The group clearly just enjoyed being together on stage and navigated their setlist with an ease that could only come from years of playing together – 26 years, to be exact. 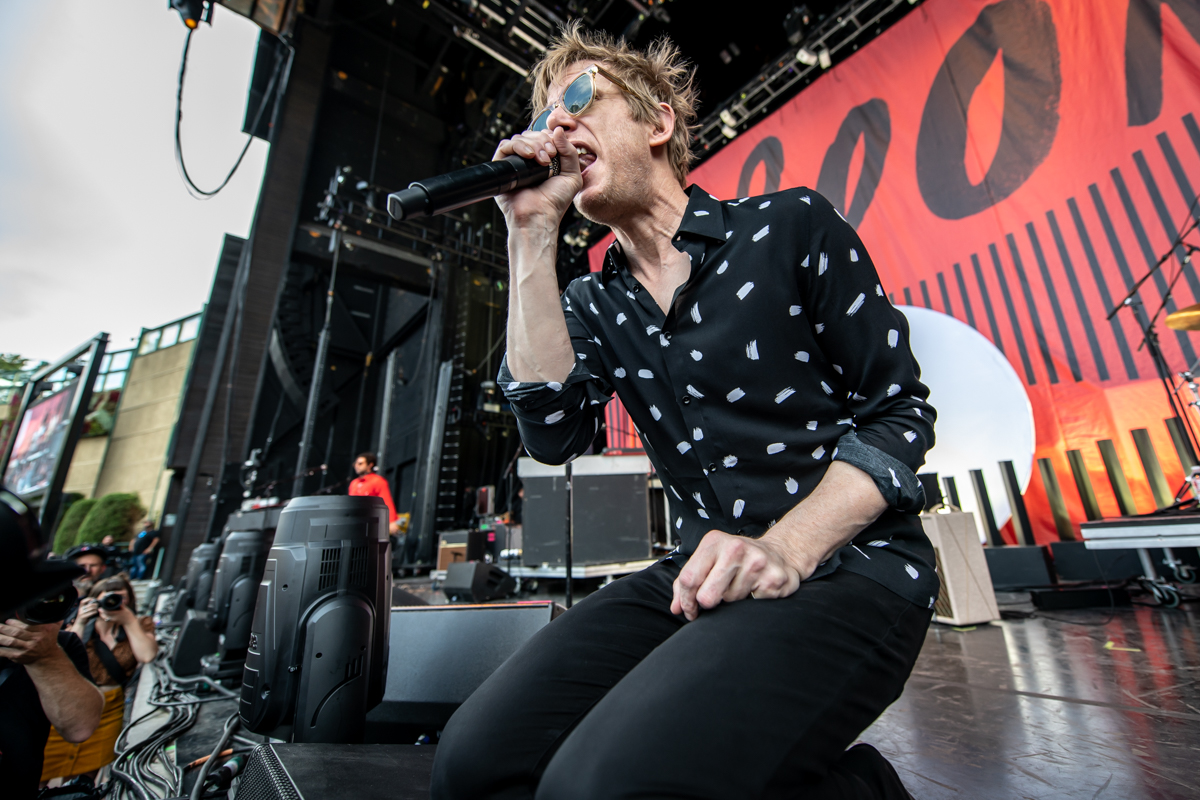 The Austin-based indie rock band makes music that you just can’t help feet-tapping or head-bopping to. But by the time the group started playing “The Underdog,” the majority of the crowd was up on their feet and quite a few people were making good use of the space the empty seats beside them provided. Daniel took a brief moment to announce the upcoming release of their greatest hits album – Everything Hits at Once: The Best of Spoon – before playing on, keeping people on their feet. The fun, upbeat vibe in the amphitheater was infectious and by the time they left the stage, ending with “Rent I Pay,” the crowd was more than warmed up for Cage the Elephant.

The brother-led band took the stage to “Cry Baby” and a flurry of guitar strumming courtesy of Brad Shultz. Matt Shultz came bounding out on stage in a gray suit and wearing a helmet with pantyhose stretched down over it and obscuring his face. He finished the song out offstage, surrounded by the crowd and dancing with audience members. 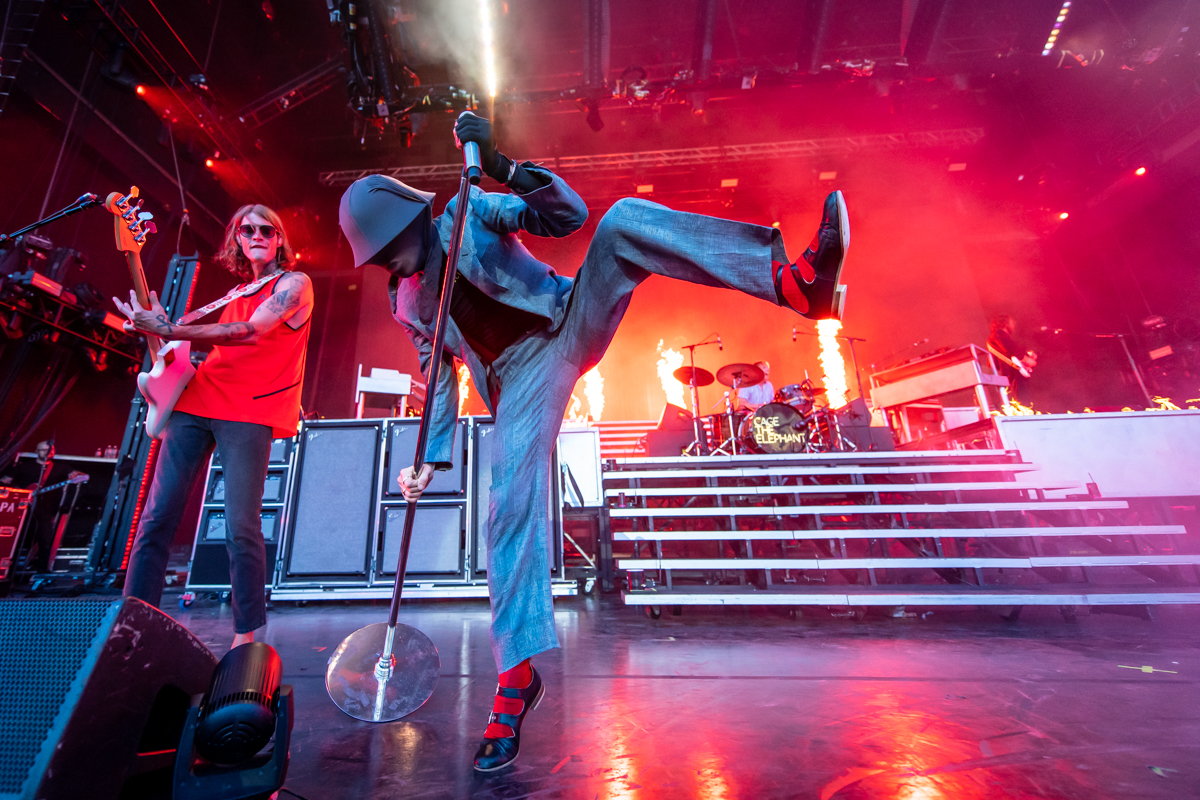 Shultz’s performances are marked by his manic energy and plenty of cathartic screams. He forgoes speaking to the crowd, preferring his audience interactions to be more physical, and this performance was no different. More than a few lucky fans got the opportunity to get up close and personal with Shultz as he danced, ran and crawled over seats and audience members. Shultz took the opportunity from his crowd interaction to steal a bucket hat from a member of the security staff, wearing it for the rest of the show.

Meanwhile, Brad Shultz matched his brother’s energy on stage, screaming the lyrics to the crowd alongside Matt Shultz’s vocals. He entered the audience once, during the guitar-heavy “Ain’t No Rest for the Wicked,” delighting the crowd that was grooving along and screaming the words right back to him. 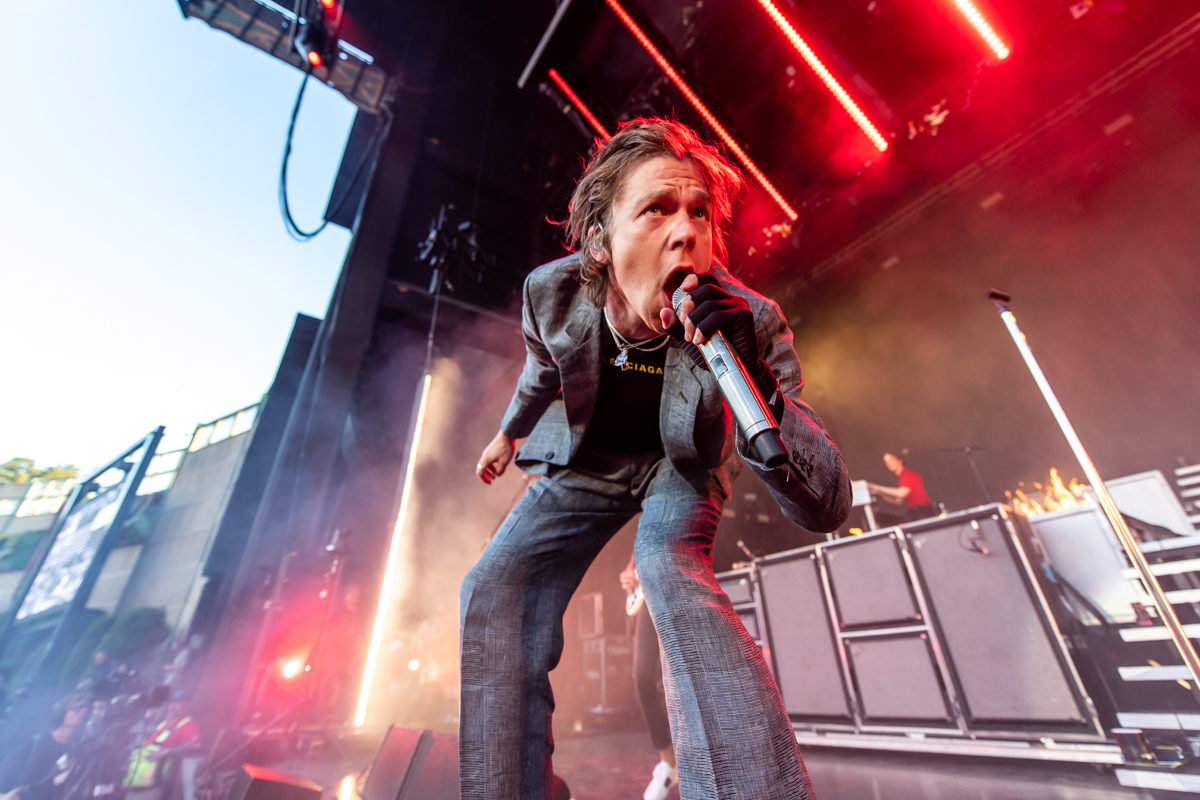 The band finished their set with “Cigarette Daydreams” and “Teeth,” both songs for which Matt Shultz literally stripped-down, losing his gray suit and t-shirt for a pair of sheer, skin-colored long underwear. As their set came to a close, Shultz once again entered the crowd, crawling over the audience to make his way to the back of the venue as “We Are The Champions” played over the speakers. As stagehands began to prepare the stage for Beck, Shultz climbed one of the towers that housed the spotlight operators, raising his hands triumphantly to cheers from the audience.

Despite the night having started over three hours before Beck took the stage, the amphitheater was still buzzing with excitement for the experimental rock legend. When he finally did make it to the stage, the familiar guitar lick that starts off “Loser” began to play,  appropriately starting his set with the hit that launched his career. Long-time sideman and guitarist Jason Faulkner skillfully played along, clearly having a good time and happy to play around with Beck and the crowd. 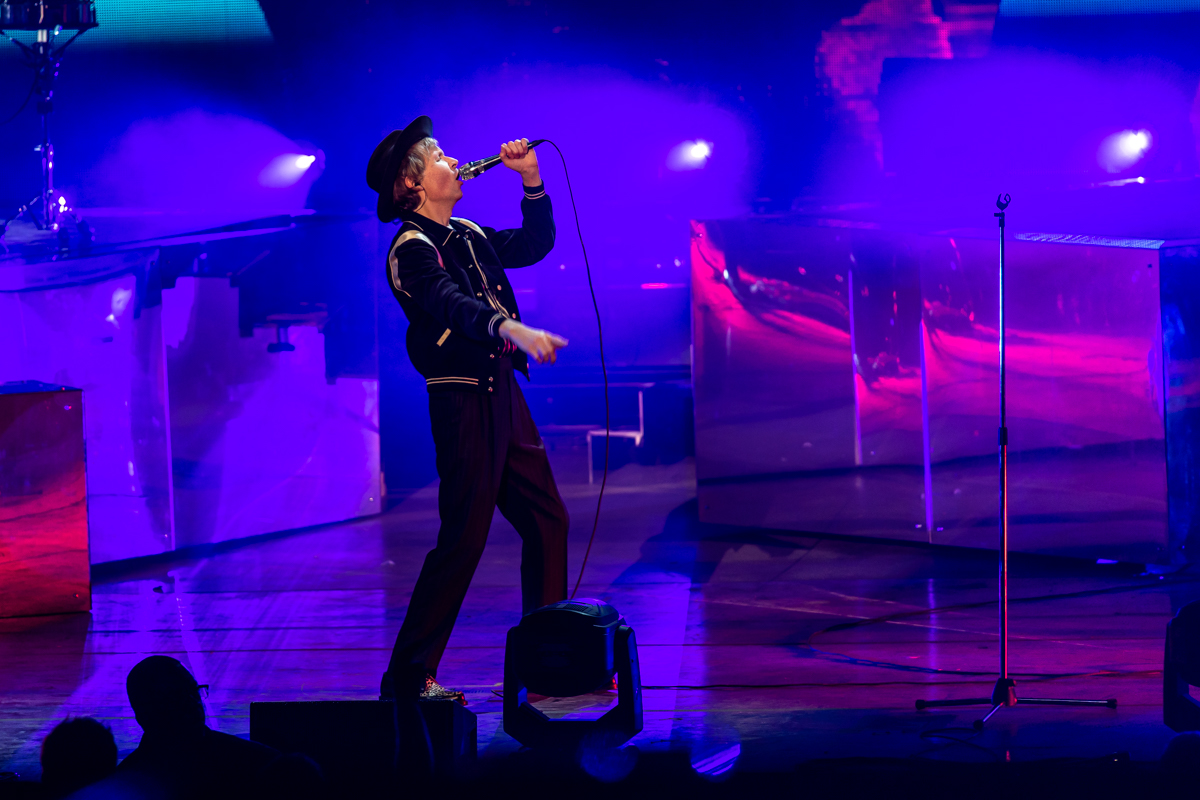 Beck spent a fair amount of time talking to his audience during his set, despite ending up having to cut a song of two from his list due to lack of time. He took a moment after the first song to acknowledge the fact that it felt strange to not be playing at Red Rocks but mentioned that Colorado crowds tend to be “some of the most generous people we’ve had at shows.” Beck monologued throughout his R&B hit “Debra” as he traditionally does in his live shows, telling the audience that there was “room for all of us in the Hyundai tonight.”

Beck’s set was just as much visual as it was musical. An LED screen served as the backdrop to the stage and there was also no shortage of laser light beams.  Acid-trip inspired visuals accompanied almost every song and peaked during “Wow,” while Hansen stood atop a platform in front of the screen asking the audience if they were ready to ride wild horses. 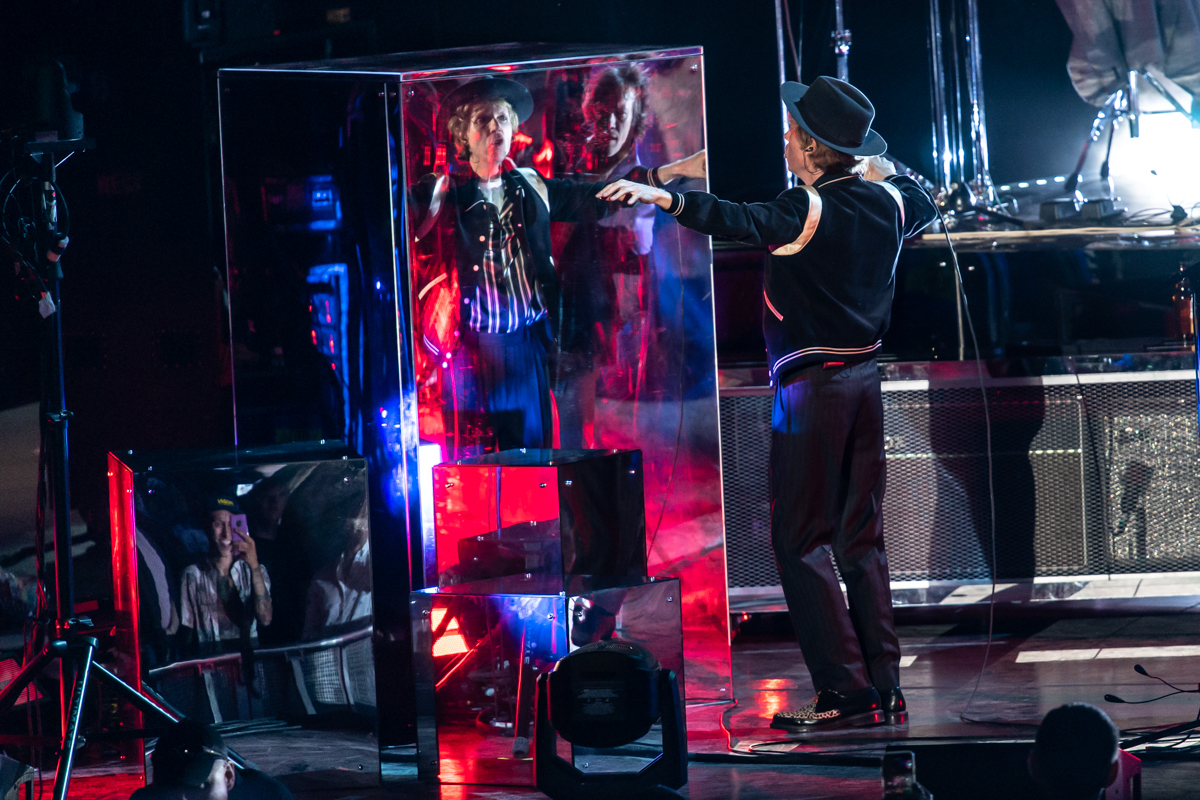 Navigating a discography as extensive as Beck’s is no small feat. However, he was able to please his fans with the genre-bending setlist he played, moving from rock to hip-hop and electronica to folk and back to rock again with ease. Amongst the other hits from his illustrious career he wasn’t able to play in full — he teased — to hip-shaking and cheers from the crowd.

Eventually, Beck brought Shultz to the stage to sing their collaboration and the reason for their joint tour, “Night Running.” Shultz danced around the stage as Hansen finished out the set with his harmonica on “One Foot in the Grave” and forgoing an official encore, a confetti and balloon-filled “Where It’s At.” As the crowds left the amphitheater, ears ringing and feet tired from dancing, it was clear that this marathon of a show is one everyone would run again.