All it took was a well-timed tweet to send a throng of people dancing into the streets. It was Friday afternoon and the sun had just begun to make its slow descent from the sky when Grant Kwiecinski aka GRiZ tweeted out a hint. “Hey Denver, #FreeShowsForThePeople in an hour or so?” he wrote, sending thousands of fingers on an all-out assault of their keyboards, and mobile devices, all with the same question in mind — when and where. Hours passed and anticipation vaulted, as plans were canceled and friends placed on stand by. 6:00 p.m. struck and Kwiecinski finally broke the silence — 7:30 p.m. at Foreign Form in RiNo, it was going down, standing room only. People pre-gamed, cast aside their 9-to-5 attire and suited up as the weekend warriors they are, racing out of their homes on scooters and mobbing over in Ubers to catch the famed DJ. 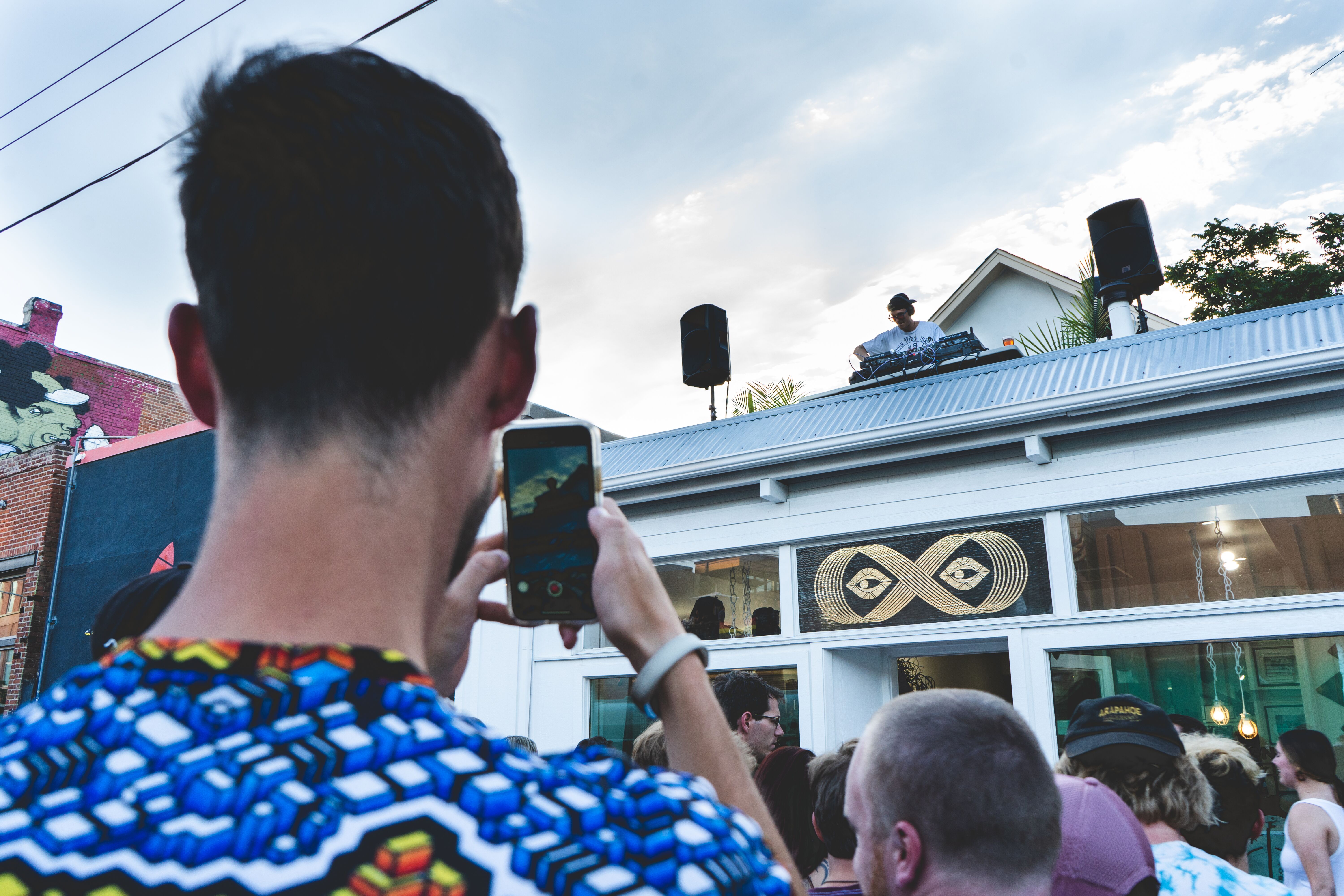 Perched atop the all-white storefront, Kwiecinski dove into a house-heavy set as his modest but fervent fans began filling in the sidewalks. Onlookers gawked, diners craned their neck to view the commotion as confusion spread from those out of the loop while GRiZ’s booming tunes banged out overhead. As news continued to spread, the adjacent roof of American Bonded packed out, Larimer Lounge’s patio hit capacity and people clung to both sidewalks as traffic coursed through the street. House tunes transitioned to feel-good hits like Cher’s “Believe” and Outkast’s “Roses” transforming the sidewalk into a cement dancefloor.

“We’ve been good friends with Grant for a while — we love creating and coming up with ideas together,” says Jason Siegel, a co-owner of Foreign Form. “When we opened the store and we saw an opportunity to do something like this, we jumped on it. We wanted to utilize the space to do something awesome for the community. Both ourselves and Grant are community forward — it’s the idea behind both our projects. To be able to team up and offer something fun, exciting and free for the community is really cool.”

Cool, however, was an understatement. Fans danced aboard moving Bike Bars and spun contact staffs through the electric air, opening up dance circles all the while a smattering of drones hovered over the masses. Dancing from atop the roof, you could peer down and watch as the party turned itself out, everyone reciprocating the good vibes GRiZ threw their way.

A turning point came as a semi-truck cruised through the street, stopping and letting its horn blare as the audience cheered and danced around in excitement. From there, people spilled into the bike lanes and clustered around passing cars, while GRiZ taking note, dropped hard-hitting bass and future house mixes that flipped the switch from house party to raging block party. The bustling crowd threw themselves full stop into the momentum of the music — headbanging and gyrating along with GRiZ, who was doing the same atop the store. For a set that was only supposed to be an hour or so, the audience congregated in the streets egged GRiZ to nearly double that, to the point where not even the fire department’s involvement could slow the crowds roll.

“I think we both anticipated quite a few people coming but I don’t think we anticipated that many people coming up. We were trying to get a guestimate and landed around 1500 people in the matter of an hour of one single tweet,” recalls Sammy Steen, co-owner fo Foreign Form. “I think it was really a testament too to how amazing GRiZ’s fans are and how well behaved they were. What could have been a really big shit show wasn’t. People were smiling, respecting the neighborhood and respecting the free show that he was offering up to the community.”

With the fire department allowing GRiZ to finish his set up, the crowd poured into the street to cheer for the DJ. As the cheers and the crowd began to dissipate, GRiZ shot out the backdoor of Foreign Form and out through the alley, wishing a quick goodbye and leaving as if nothing ever happened.

“The free shows for the people vibe is just about doing a good thing and having fun. This all creates a space where I can let go of all the BS of life and just enjoy being myself and make some people’s day (including mine), ” says GRiZ about the impromptu set. “The content is all freestyle. I have a ton of music I’m always keeping fresh and love to read the vibe of the space and play to that. Foreign Form is a product of creating your own current in an ocean. That’s the kind of energy and attitude I’m attracted towards — I’m going to support that as much as possible.”

The whole episode was a fever dream of dancing and good vibrations courtesy of one of Denver’s favorite DJs. Many had never experienced anything quite like it, but rest assured, Foreign Form has more up their sleeves.

“We’re going to be creative and continue to do things people don’t expect. The goal with this is to keep people guessing. Anytime someone gets excited about one of our events they know they’re going to experience something unique and be around some old and new friends, and just good people.”

All photography by MJ Kampe

*Editor’s Note: Article was updated to reflect statements from Foreign Form and GRiZ.