The Chalk Art Fest Endured a Weekend of Rain

Every year, Larimer Square becomes a center for street art — but not like the murals and graffiti you see in RiNo. This street art is literally on the streets, as chalk artists spend two days painstakingly drawing on the ground to produce magnificent works of art.

Unfortunately, this year the festival was interrupted with two different rain storms — one on Saturday and another on Sunday — which washed away much of the detail that the artists spent hours creating. However, that didn’t stop the artists — if they’re painting in chalk they must understand the temporary nature of their craft — and many of them took a second and third chance at cleaning up their piece. The rain also didn’t stop the juried portion of the festival, which delivered awards to eight adults and four youth participants. We’ve included a list of all the winners and photos of some of the ones that maintained their integrity.

Maeva McCarthy created a photo-realistic face with just the right colors for skin tones and hair. The striking beauty caught people in their tracks, and the freckles weren’t easily forgotten. When McCarthy’s award was called out, people in the crowd gasped because they remembered her piece as a highlight throughout the weekend.

The original piece that Christina Jalaly created suffered from the second round of rain, but she managed to bring back something whimsical in its place. Her choice of vibrant, saccharine colors popped out of the recently wetted pavement.

“Circle of Life” created by Jared Linton won the best use of color, and unlike previous winners in this category, his composition wasn’t over saturated. Instead of relying on the quantity of color, Linton used a clever pattern to represent shadows and highlights through color. At first glance, his piece wasn’t a showstopper — but upon closer inspection, it was one of the best of the festival, no questions asked. 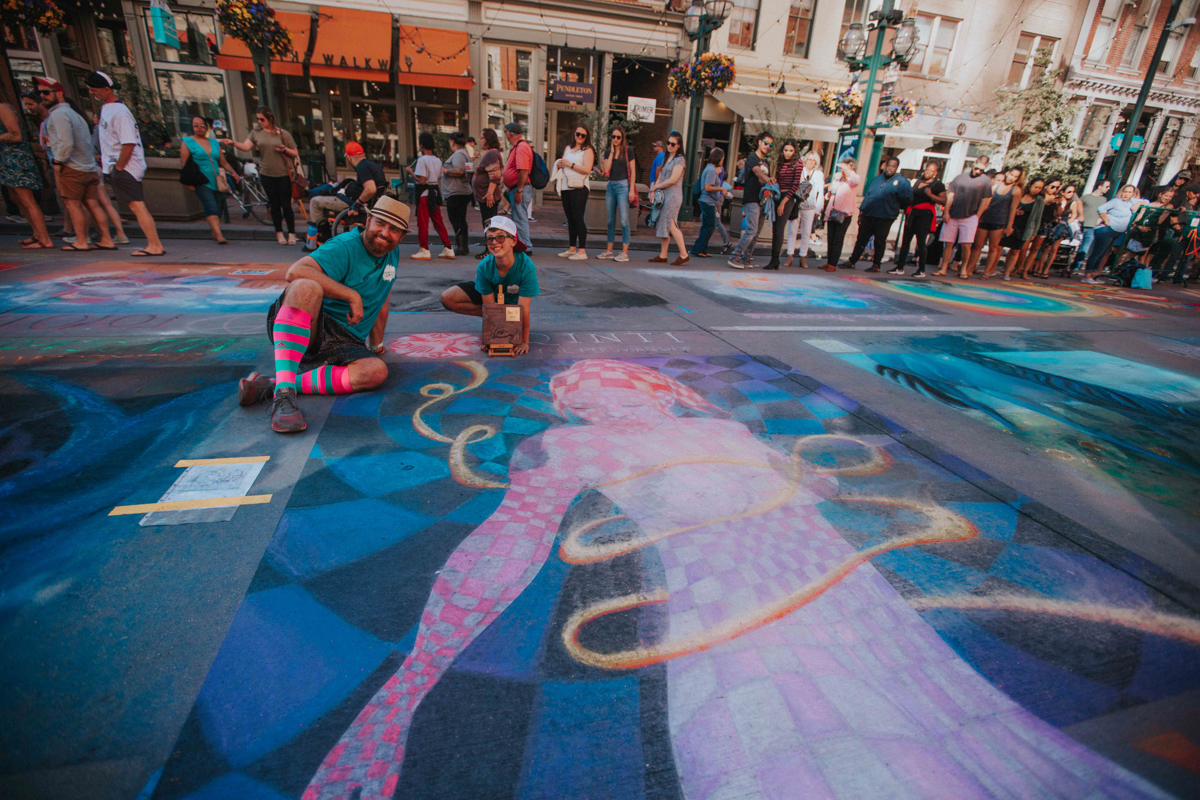 “Rhapsody in Squares” by Joshua Rau

Joshua Rau’s piece relied on the geometry of squares to present a 3D effect. After the second storm, the suggestion of three-dimensionality remained, and the color and composition of the piece was still proof of Rau’s skill with chalk.

The Rest of The Awards

At some point, these pieces were magnificent. But, with the second bout of rain, they were too washed out for our own photos to do justice. Here’s a glimpse of what they were like when the judges made their rounds. 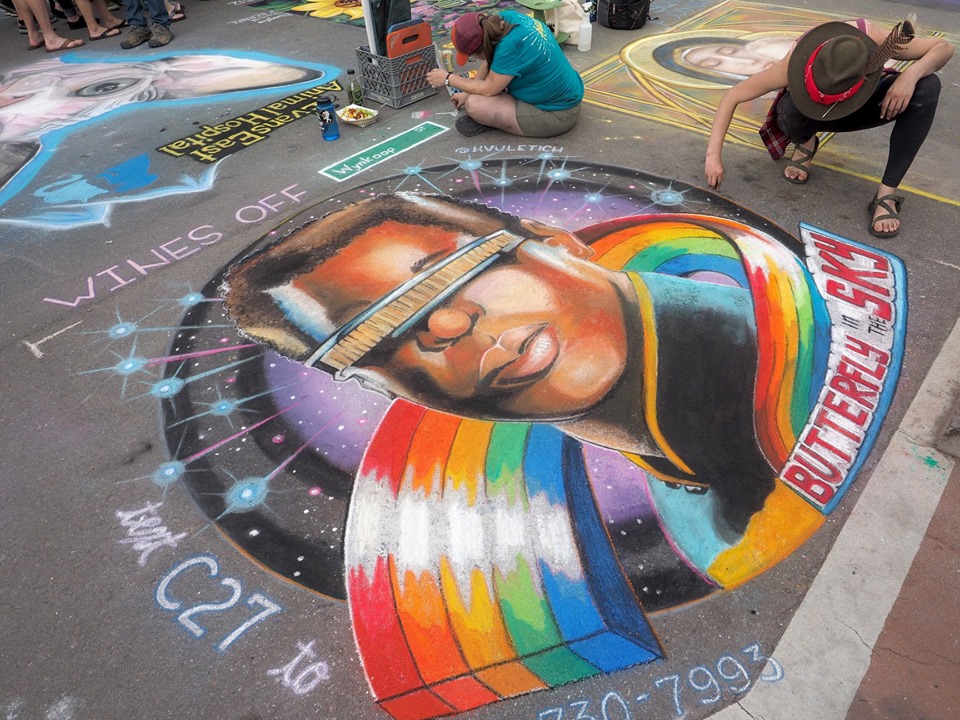 Katerina Vuletich, “Butterflies in the Sky.” Vuletich painted one of our personal favorites last year, the Bob Ross portrait. In 2017, she won the Best Use of Color category. This year, her flair and style returned in force, and the judges awarded it accordingly with a second place Best in Show. We’re expecting to see her win first place next year. 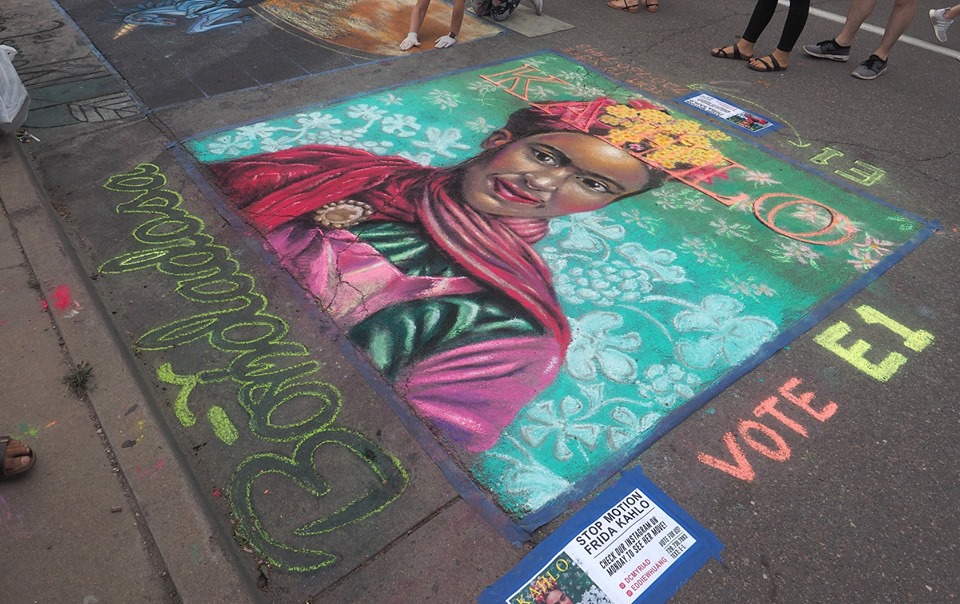 Daniel Chavez “Frida Stop Motion.” Last year, Daniel Chavez won second place in the Best in Show category for a collaboration he did with Eddie Huang. Chavez is talented at portraits and the Frida Kahlo he captured was beautiful before it was washed away.

Best Reproduction of a Master’s Work 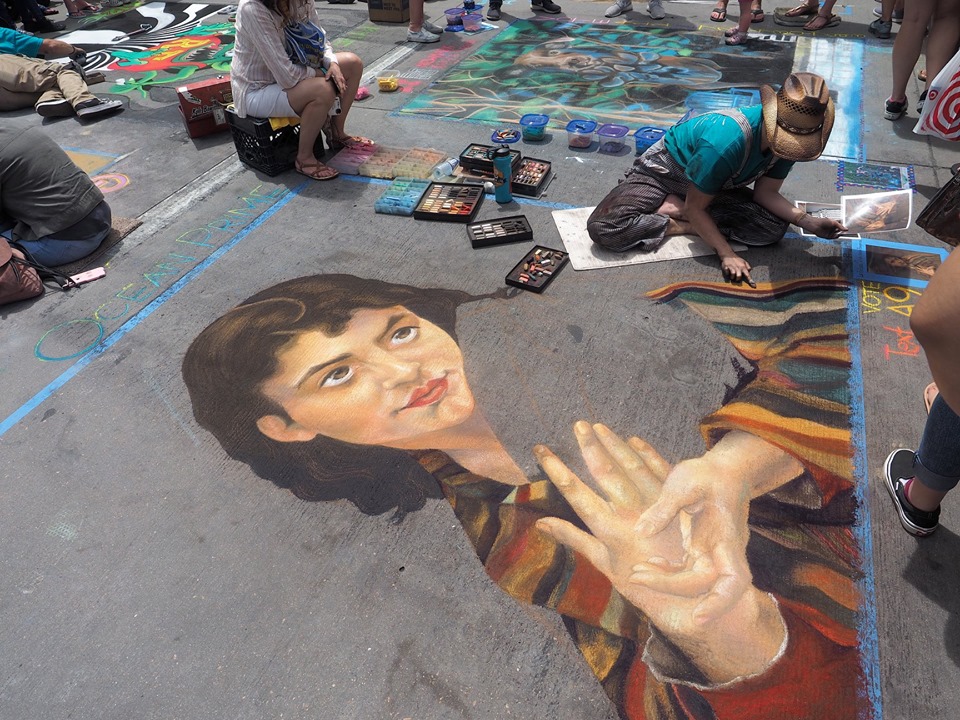 Olivia McLeod “La Frileuse.” Returning for a second win in this category is McLeod, who won in 2017 with an equally stunning reproduction. McLeod knows her old masters and she is nearly unmatched in her ability to portray them with chalk. 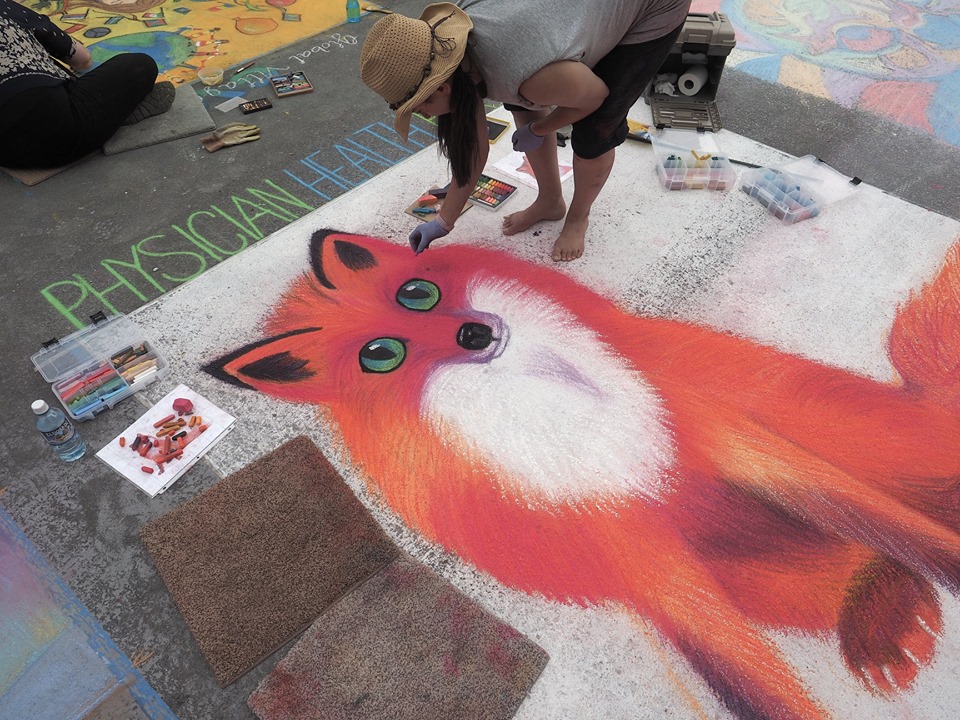 Natalie Gillespie “Red Fox.” Gillespie knows how to please the visitors to the Chalk Art Fest because this is the second year in a row she’s won People’s Choice. Last year, she created a colorful lion and this time she used the big, cute eyes of a fox to enchant viewers.

All photos by Annelise Blackwood, unless otherwise noted.