Tucked away inside an old church between Baker and Wash Park is a breathtaking set of murals by celebrated Spanish artist Okuda San Miguel. Bold, geometric technicolor shapes spill from the ceiling to the walls, covering nearly every inch of the International Church of Cannabis — home to the Elevationists. This mesmerizing building has captivated both the congregation and visitors from near and far (some come in the name of weed, others in the name of art) for the last two years, but starting this weekend the entire experience will be elevated even more. Launching, appropriately, on the weekend of 4/20, BEYOND is an immersive journey through the church which includes projection mapping on top of Okuda’s murals, laser lights and audio displays. The entire experience is aimed at facilitating meditation, though it certainly won’t be your average sit-on-a-floor-cushion session.

“I believe the combination of artistic innovation with ritual meditation is the future of spiritual life,” co-founding member Lee Molloy said. “But, more importantly, I believe that life is wonderful, and church doesn’t have to be boring or dogmatic. What we have created is a transcendental experience and we know the people of Denver will be proud.” 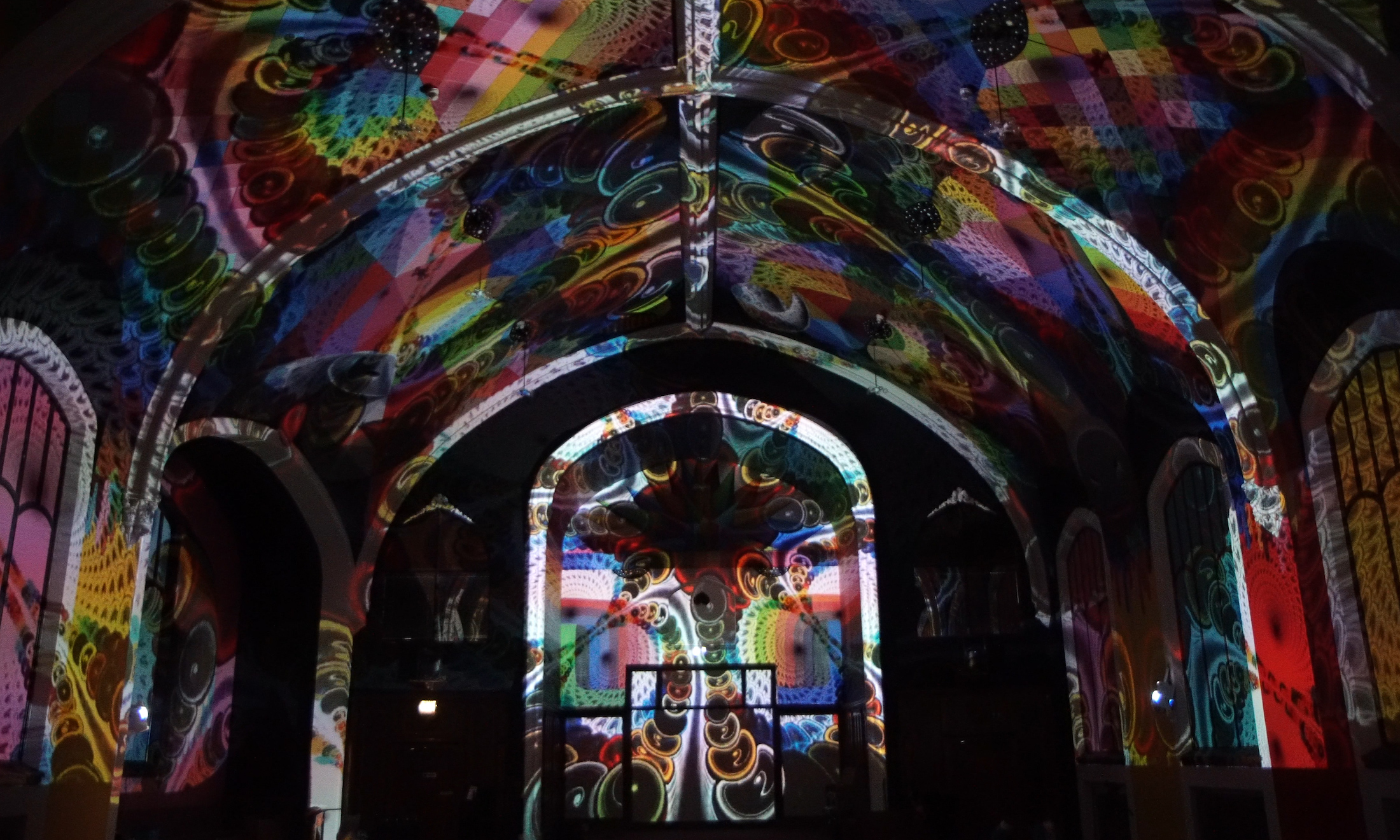 When the Elevationists secured Okuda to paint the inside of their church in 2017, Denver was in a different place culturally speaking. In the two years since, the city has experienced explosive growth in the art and culture sectors. Major museums have curated grand exhibitions like Dior, well-known galleries have opened satellite locations in Denver from other cultural destinations (like Mirus from San Francisco and Station 16 from Montreal) and the street art festival CRUSH Walls enjoyed its biggest year (in attendance) to date. Not surprisingly, Mirus even hosted Okuda for a solo show in their Denver gallery at the end of last year — an event that was well-attended by star-struck Denver fans.

But even with all of the other improvements to Denver’s cultural landscape, the paintings inside the International Church of Cannabis have held their own. Okuda has become even more well-known than before as well, traveling all over the world to install sculptures and paint monumental murals. His modern-day frescos are a treasured — and foundational — part of the church. 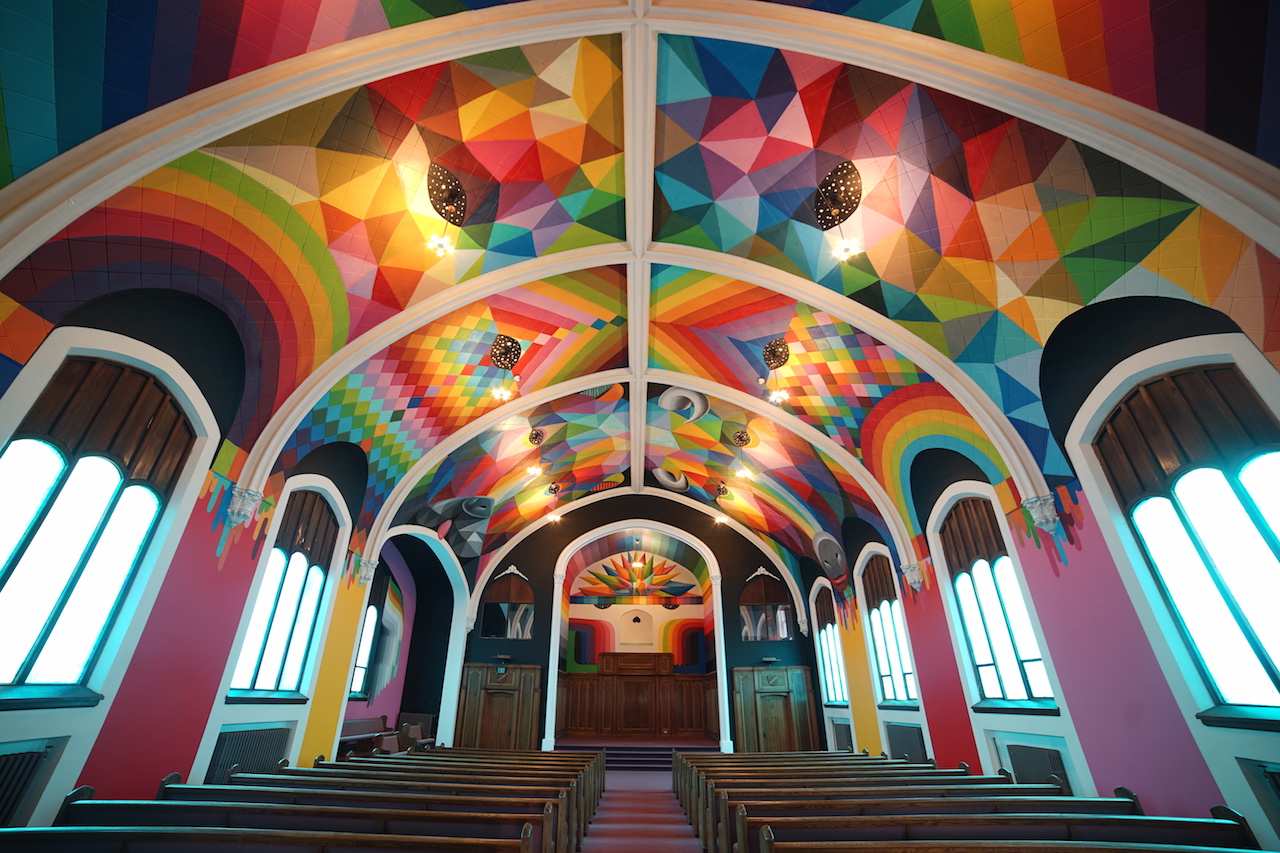 “Members and visitors alike have looked up at our gorgeous ceilings for years and asked ‘how do you top that?’ The truth is, we can’t,” the official press release stated. “However, after adjusting our thinking, we looked up, thought again, and knew we had an amazing place to start.”

BEYOND will take visitors on a fully-guided meditation where they will encounter “enchanting music, wondrous sound and an awe-inspiring laser and projection light experience.” Part of the “wondrous sound” is a planetarium-style Classic Rock laser light show featuring anthems from such celebrated bands as The Doors, The Beatles, Led Zeppelin, Jefferson Airplane and, of course, Pink Floyd. “It goes so far beyond any planetarium or laser light show you’ve ever seen… The projection map technology and custom visuals make BEYOND not only unique but truly mind-expanding,” co-founder Steve Berke remarked. All of the visuals that are projected onto the murals were created by an in-house team led by Adam Mutchler.

Starting Friday, April 19, visitors can show up every hour on the hour from 1 to 9 p.m. to catch the entirety of the “show” which, as the church wanted to point out, is a non-consumption event. Part of the reason it will be non-consumption (read: no cannabis is allowed on the premises) is due to the ongoing court cases with several of the co-founding members of the church who were cited* on April 20, 2017 for violating the Colorado Clean Air Act. One of the members who was charged has already been found guilty (Steve Berke, who must pay a $50 fine) and another one left the state and is asking for a plea deal. The third, Molloy, will be going to court for his charges this Friday — making for “an interesting 4/20 eve” as he stated in a press release.

The following day, on Saturday, April 20 there are only four shows from 6 to 9 p.m., with special guest musician Melody Monroe performing live. On Sunday the doors are open from noon to 6 p.m. Tickets are required for entry. The Elevationists hinted that BEYOND will become more than a 4/20 event, and if we were to guess, this kind of interesting activation of Okuda’s art could become a regularly scheduled immersive experience.

For more information and to purchase tickets, go here.

Photos courtesy of the International Church of Cannabis, unless otherwise noted.

*Editor’s note: Originally this article stated that the co-founders were arrested on April 20, 2017, but they were cited. That correction has been made.