“Buena onda over everything.”

Twenty years ago, powerhouse Lorena Cantarovici moved to the United States from Argentina with a grand total of 300 dollars in her pocket and barely a word of English under her belt. Today, she is the proud owner of the wildly successful and beloved restaurant, Maria Empanada, with five locations now spread throughout Denver and its surrounding neighborhoods. Her success, however, was achieved through hard work and navigation of a multitude of financial and cultural challenges.

A storyteller at heart, Cantarovici has created a beautiful niche in what she and Victor Arango, Director of Marketing, Communications, and PR, fondly call an “economy of nostalgia.” Cantarovici’s warmth and passionate energy were infectious as she recounted her time growing up in Argentina and making empanadas with family. She shared how Maria Empanada came to be — and how the business actually speaks to her — along with advice for young women starting their own businesses. She even revealed her personal favorite empanadas on the menu and what buena onda — loosely translated as good vibes — really means. 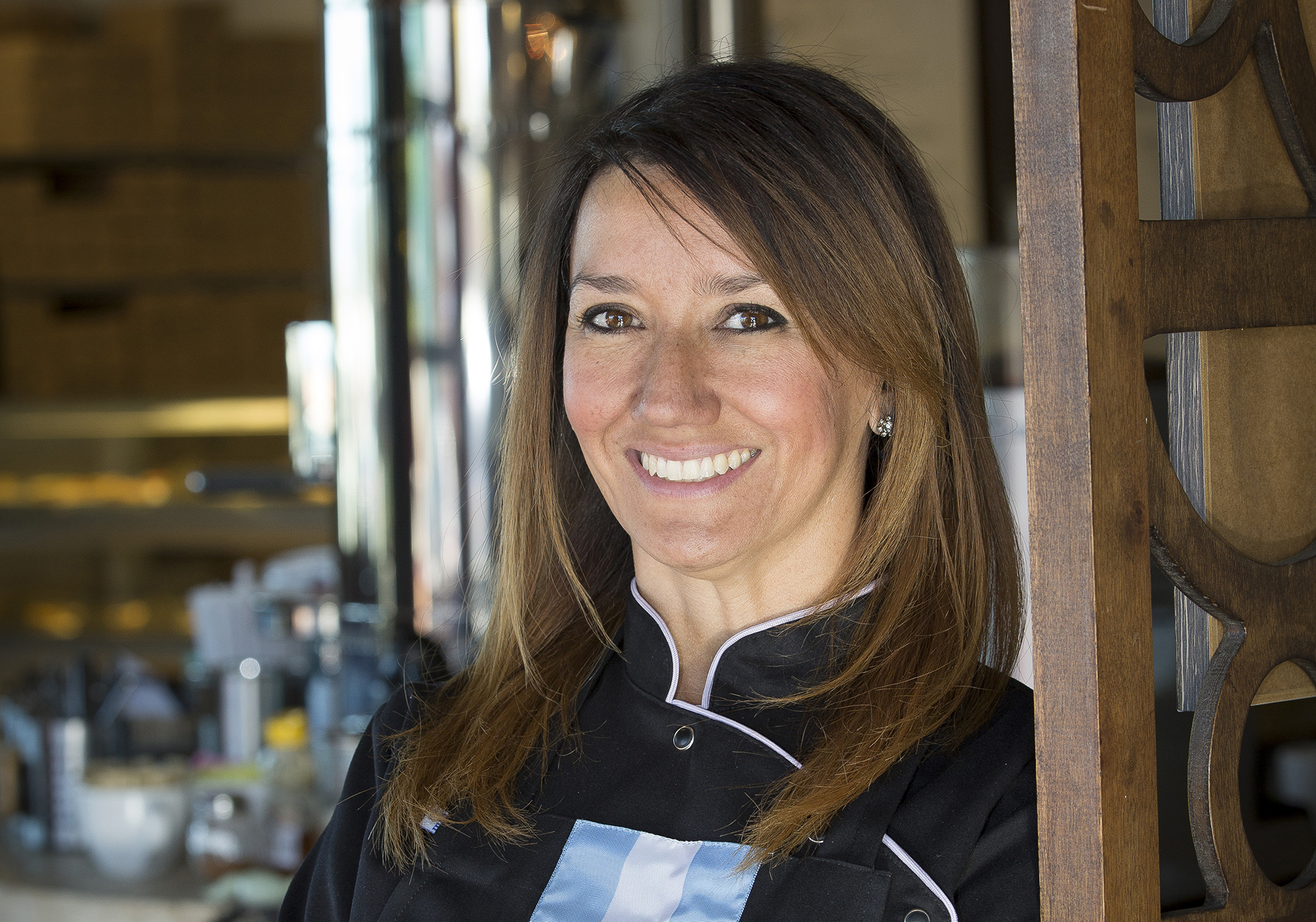 Cantarovici’s initial motivation to move to the United States from Argentina stemmed from her weariness of seeing so much financial and economic crisis in her country and for her family. However, she admits that she was also wooed by American movies. “It was the dream of watching American movies and everything looks perfect, beautiful and organized. Why can’t I be one of them? I just had a wish to do more,” she reminisced of her early decision.

However, the financial stress of having to stretch the money she had brought with her was not her only challenge. Cantarovici also did not speak English. “That was so challenging at the beginning because one of the things I really enjoy is talking. I love having a mate and talking to my friends, coworkers and my family. I’m a communicator constantly, and being unable to speak was very frustrating and sad,” she admitted.

Cantarovici ended up in Colorado by accident. She knew nothing about Colorado or Denver, but she had a friend here. “As soon as I woke up and opened my eyes, in the morning I saw the mountains, and I could not even believe it,” she fondly recalled. Mountains held a special attraction for Cantarovici from a young age when she would vacation in Cordoba, Argentina to visit her grandparents. Her grandparents’ home had no electricity or bathrooms, but she recalled the beautiful, rustic feel of it. Cordoba was home to idyllic mountains, so Denver immediately felt nostalgic and refreshing. 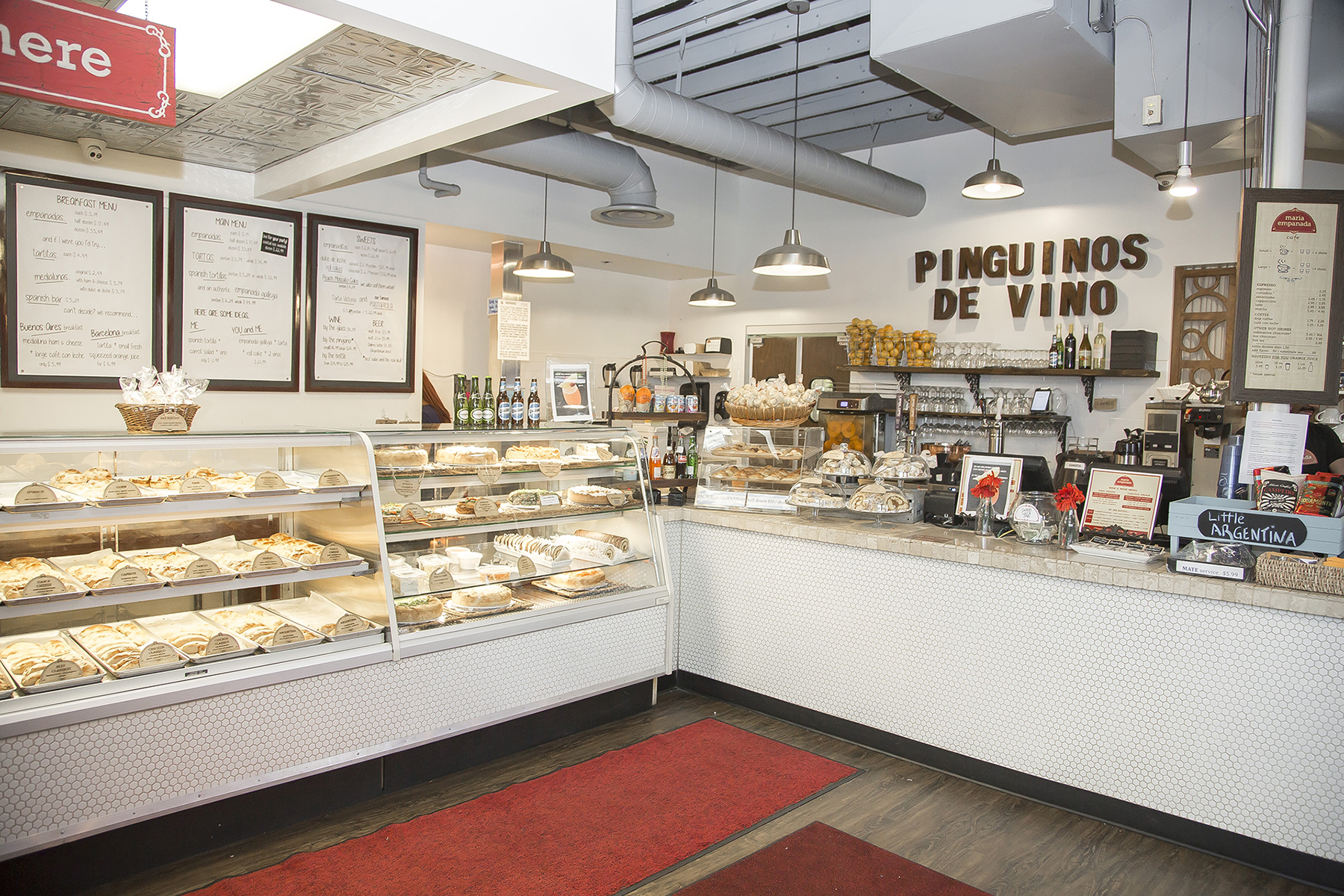 Ironically, Cantarovici’s first job was at a Mexican restaurant on Belleview Avenue by the name of Garcia’s where she was a server out front and was forced to speak to people instead of in the back in the kitchen where she would have felt more comfortable. However, Cantarovici embraced this challenge set in front of her. “I learned a bit of English in the restaurant industry through Mexican food,” she laughed at the odd yet successful combination of culture and language. Cantarovici adored her time at Garcia’s, referring to it as her “castle” and loving the owner. After she left Garcia’s and years had passed, she lost touch with the owner until an accidental rendezvous at the Global Chamber of Commerce’s entrepreneurship gathering. At the time, Cantarovici was a mere two weeks away from opening up her first location of Maria Empanada, which happened to be three blocks down from Garcia’s. In a twist of fate, the owner of Garcia’s revealed that she was actually closing the doors of her restaurant, just as Cantarovici was opening hers. 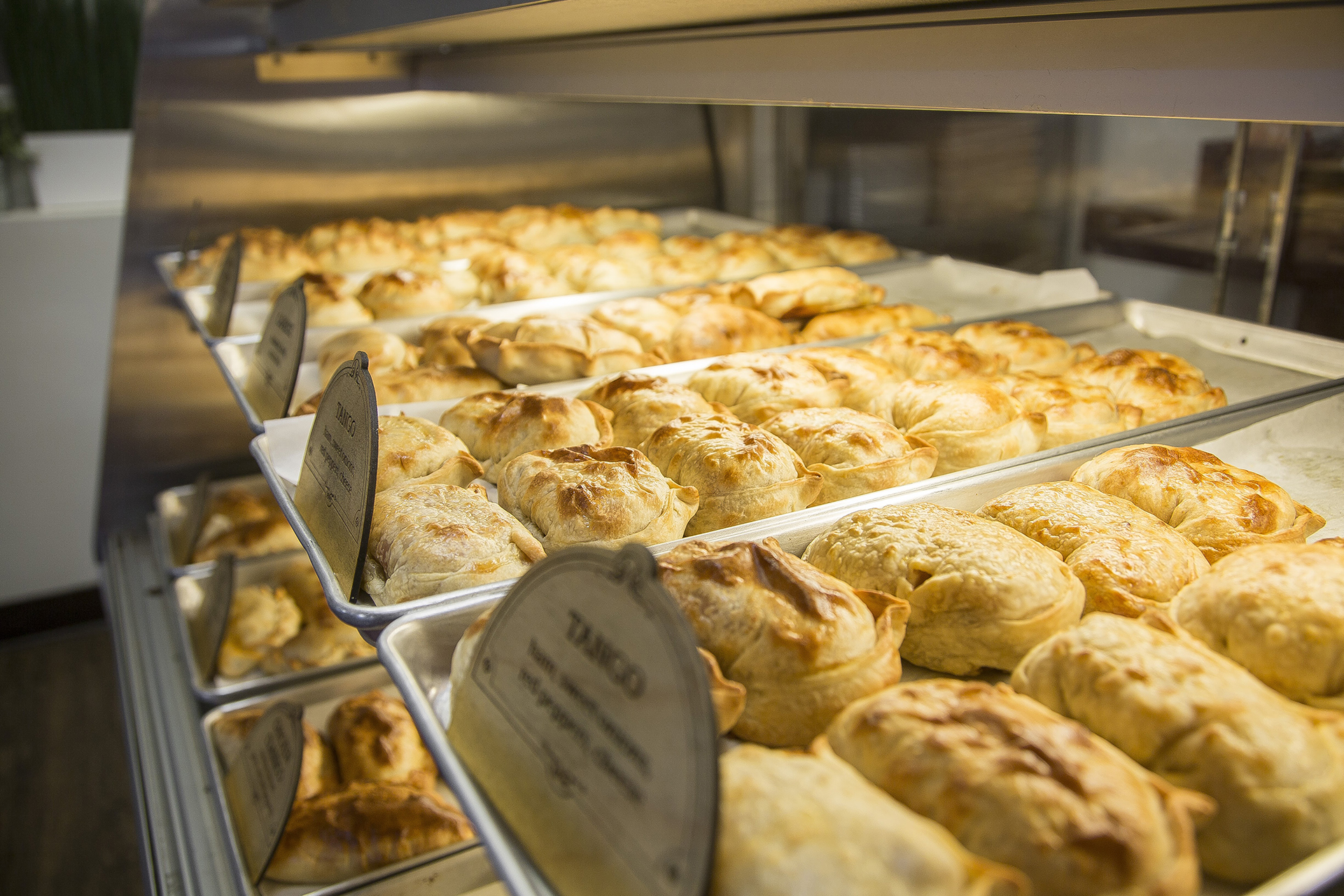 The question of “Why empanadas?” can be answered twofold.

“The creation was inspired by the nostalgia of my food, of my culture, of my going to work [in Argentina]. An empanada? In my country, you can find them everywhere. Not in the street like tacos. They are in little shops, like mom and pop shops, maybe two per block. I remember there was a bus stop two blocks from my house that took me to work. Next to it was a door that was bringing the aroma of empanadas and it said ‘Casa de Empanadas’. Of course, if I miss the bus, I need to wait a little bit, and I was always going in, getting one empanada,” she recalls loving the spinach one.

However, Cantarovici also used to make empanadas with her mother in Buenos Aires and her grandmother in Cordoba. “It is so tedious to make empanadas, let’s be honest,” Cantarovici laughed. “But I love it because, after you do the dough, after you do the filling, you close the dough. That’s the part all adults give to the kids, to create the closure. We call this repulgue, and that’s the part that we, the kids, love most because that’s when the art comes in. I love to do that part. That was beautiful. Then we fry them, put them in the brick oven. Then, of course, we had more members of the family coming over because you don’t eat them by yourself.” As such, Maria Empanada was lovingly named after Cantarovici’s mother, Maria, who she describes as her role model. She lauds her mother for teaching her to fear nothing. The restaurant’s name also pays homage to her grandmother of the same name. 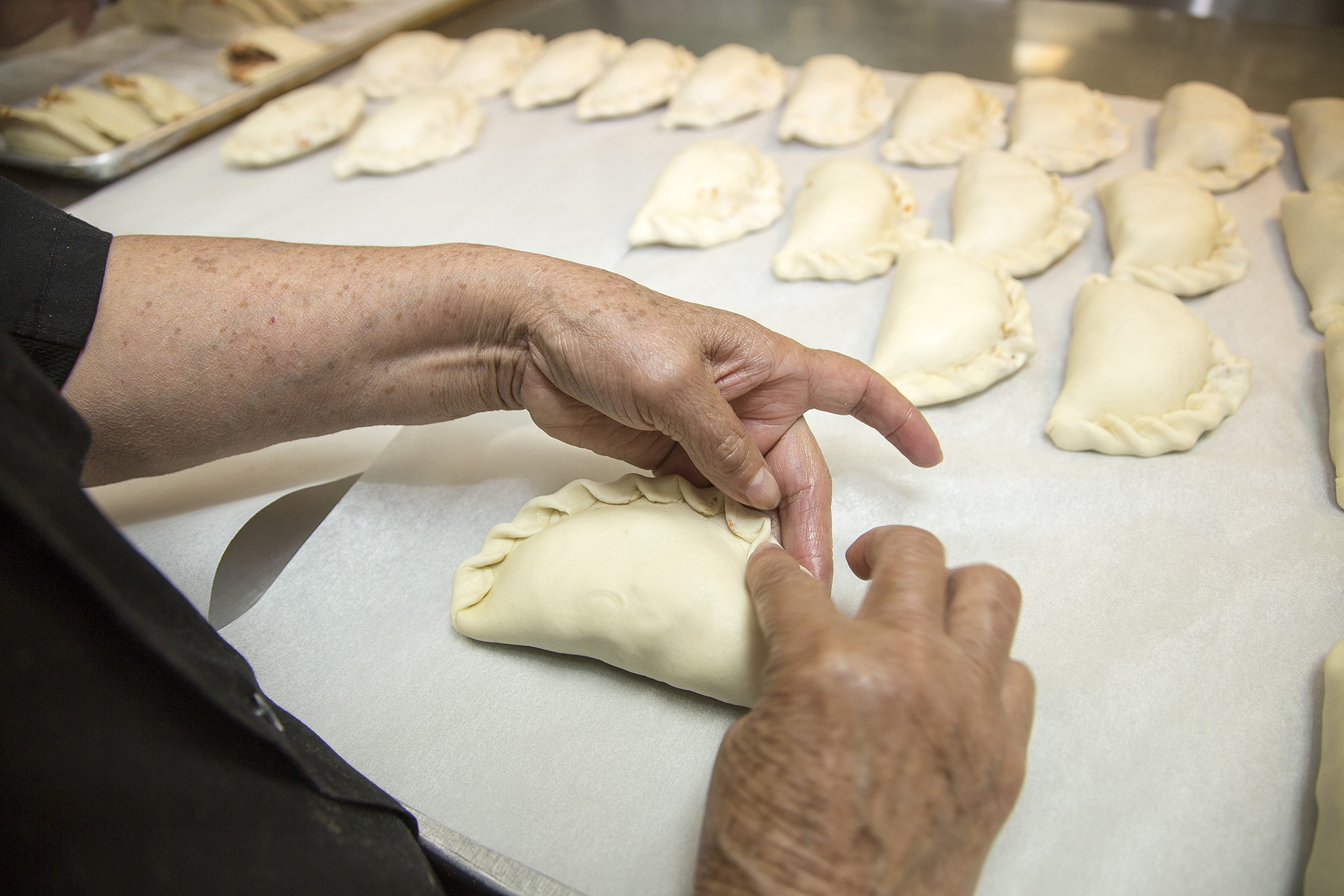 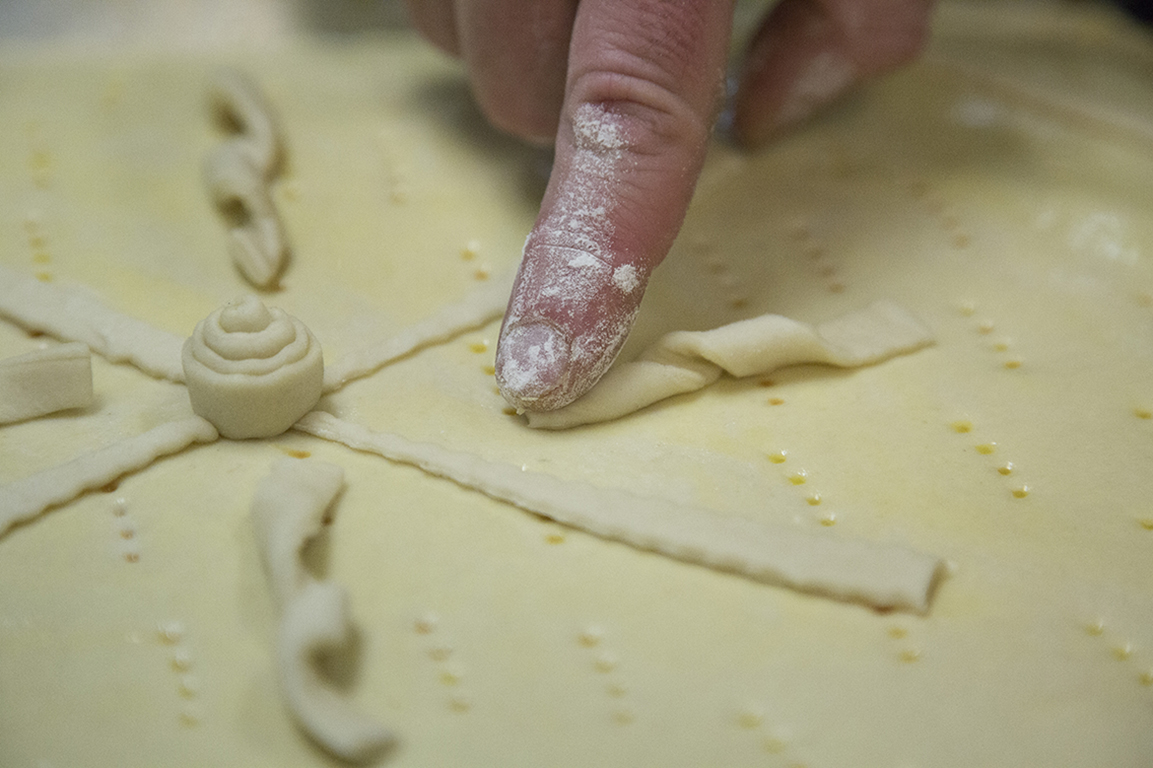 Her vivid stories painted a beautiful picture of her younger years, and that passion bubbled over into the humble beginnings of the restaurant. In 2008, Cantarovici recalls being hit hard by the economic recession with two baby boys to care for. Her husband was working at the time, but it was not enough. She describes feeling as though she could not sit still, needing to do something to help out her family. As a result, she started selling empanadas from home with friends being her first clients. After a little bit of time, she started to get more and more calls for her empanadas. Though she was excited about the large influx of orders, her oven just couldn’t handle the constant use anymore. Resourceful as ever and able to save some money from those first few sales, she bought a small, commercial oven that could cook faster and turn out a higher quantity of empanadas. However, her power grid couldn’t quite handle that, and she had to make the choice between plugging in her air conditioner or the oven. As such, her family lived without air conditioning for a while.

Those were her first baby steps with the restaurant. From there, Cantarovici describes Maria Empanada as being like an entity with its own mind that was pushing and ready to come about on its own. She humorously equates Maria Empanada to a baby that was going to be naturally born regardless of any say she might have had in the matter. “Why would I stop this?” she asked herself. As someone believing in signs, she felt that this was a natural and necessary beginning. She signed a lease for the first location in Lakewood for $4,000 and described it as the scariest time of her life.

“The only person who can’t quit is you. You need to know as much as you can before you do it. Once you have that, the passion is what will keep you moving.” 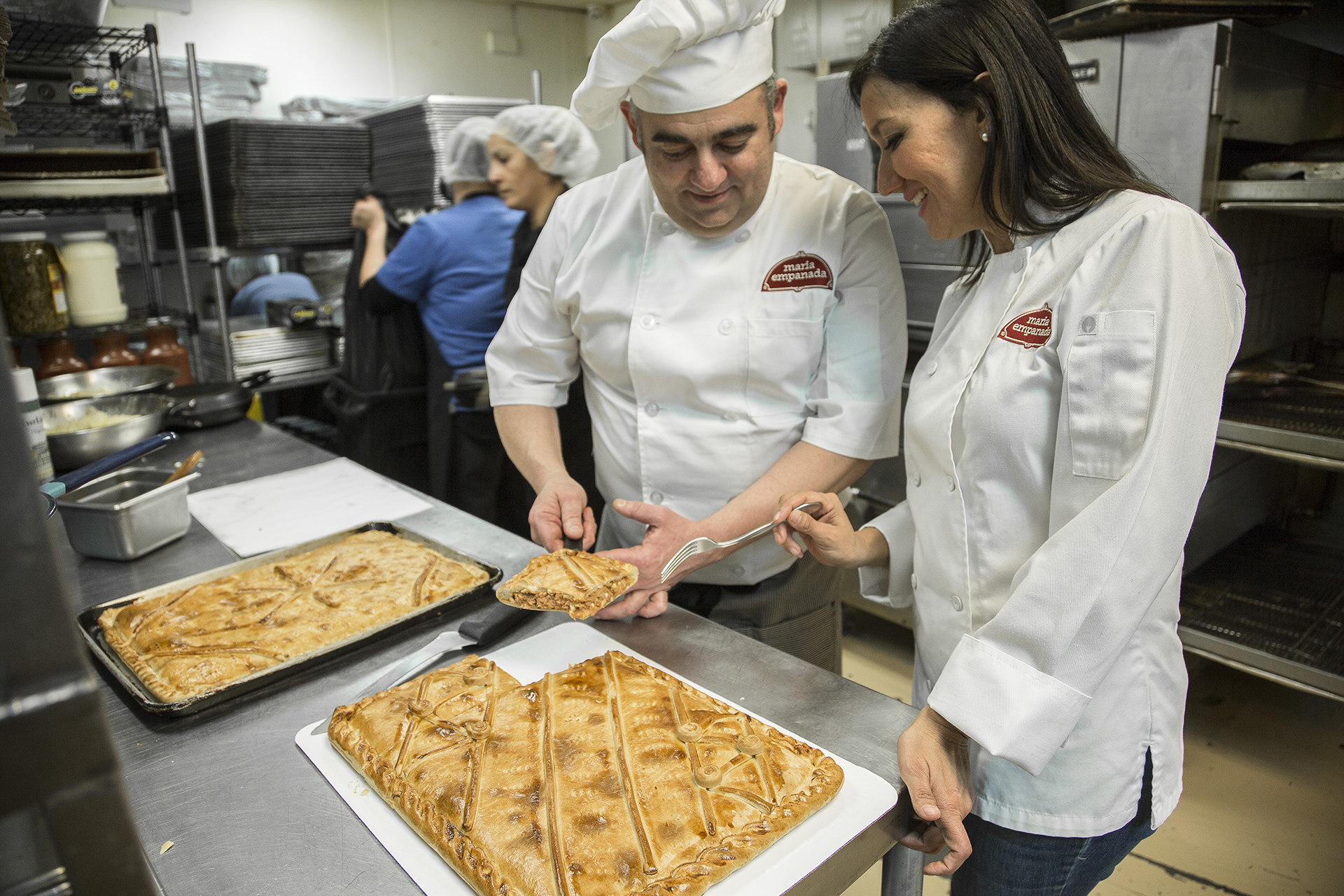 Highly intuitive and intelligent, Cantarovici and her business talk to each other. She listens to the heartbeat of her business to hear if it is ready for changes and advancement. Cantarovici extends this advice to young women looking to start their own businesses.

“The only person who can’t quit is you. You need to know as much as you can before you do it. Once you have that, the passion is what will keep you moving. Now, it’s you and the business. You have to complement each other: you and the business. Maria Empanada is my best friend. But I fight sometimes with her, you know? Sometimes, we don’t like each other. Sometimes, we go together with the same purpose, and sometimes we don’t.” It wasn’t always a natural fit. In the beginning, when the business wasn’t doing as well, she felt tempted to add cilantro, frijoles or rice alongside the empanadas to make them more palatable to her new American audience. “But no. I stay completely Argentinian,” she had to remind herself.

While listening to what your business needs, Cantarovici believes it is important to keep realistic expectations — be prepared for the business to fail and recognize the hard work it takes. Keep in mind that the business needs to work without you one day. Arango also prides Cantarovici on inventing a whole new category of fast-casual food that they have coined “Craft Casual.” Maria Empanada employs no machines, and Cantarovici derives joy in creating a labor of love for the food made completely by hand. 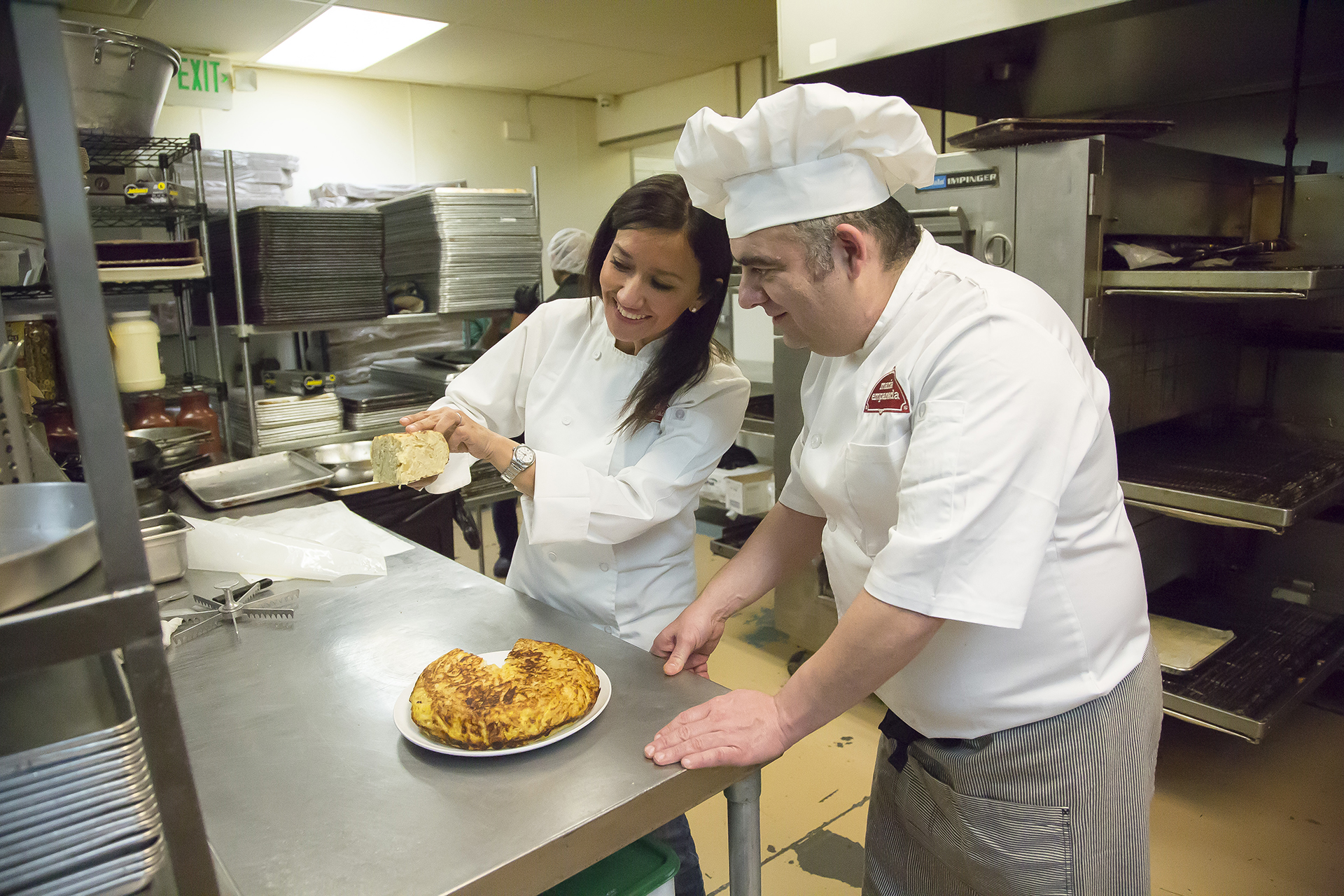 Though she now holds a successful and powerful position in the restaurant scene of Denver (and rapidly expanding from there), Cantarovici has not forgotten her early days in this new country. When she first arrived in the US she noticed not as many people liked to hug. To resolve that, she forever writes un abrazo, a hug, in her email signature. She loves to hug everyone when she arrives at Maria Empanada. “So arriving to my office probably can take 15 minutes,” she exclaimed happily. “Because a hug is not just a hug. It’s a conversation. It creates something, right? I attacked that problem. I will hug every time.”

The hugs are just one element of what Cantarovici and her team have worked hard to create: buena onda. While it can loosely be translated to good vibes, it is about so much more than that. Cantarovici wants people walking in through the doors of Maria Empanada to be transported into a different place where troubles are left elsewhere. She wants them to be immersed in the environment with the music, the soccer always on the TV and the people. Cantarovici extends her hugs beyond just her employees and family: “after three times, we hug that person when they walk in.” 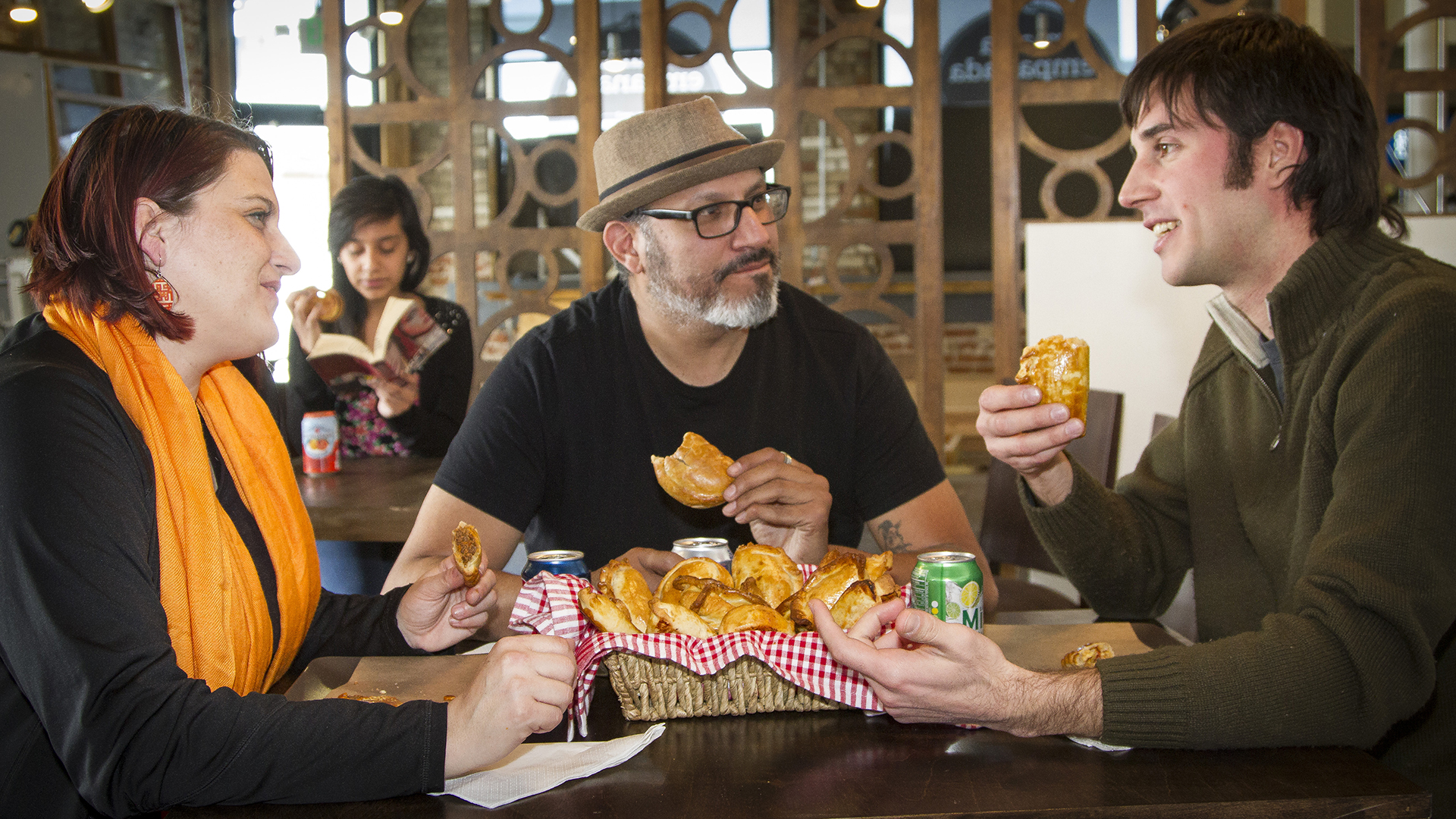 This is where Maria Empanada’s idea of an “economy of nostalgia” comes into play. Arango describes it as a “need to connect to your land, to your people.” He believes that people seek that connection, and “if you don’t find it, you create that.” This economy feeds on nostalgia, which lies at the heart of Maria Empanada. She loves being able to share a part of her heart with the local Denver community — whether it be in the form of a hug or an empanada.

Oh, and her personal order off her menu? The empanada gallega, the beef empanada, and the spinach empanada — but creamier and more delicious than the one at her old bus stop in Argentina.

All photos courtesy of Victor Arango at studiocandela.com