This is the second story of the ongoing series Deep Cuts, which highlights a local DJ here in Denver every month. The series includes a profile on important underground DJs around Denver as well as a playlist of five of their current favorite tracks.

Nightcap brings the focus of DJing back to the tracks themselves. There’s no ego, no bullshit, because the duo — which is comprised of Matthew Shogi and Kevin Cavanaugh — is fairly new to DJing as well. Both are seasoned producers and music fanatics, the latter being an element crucial to any good DJ, and Shogi and Cavanaugh understand the social connections that blossom over shared musical interests. Music brings people together, and Nightcap is a refreshing reminder that the focus of DJing is on the shared love of music.

“We were hanging out at my shift at Squire and there was nothing really going on music-wise so I just kind of brought them in,” said Kendra Cochran, who bartends at the Squire Lounge and helps facilitate Nightcap’s events at the bar. Nightcap started off as a monthly event in March of 2017 and has snowballed ever since then.

Matthew Shogi, one half of Nightcap. Photo provided by Shogi

“When I got on-board around October or November [of 2017], that’s when they offered us a bi-monthly,” said Matthew Shogi, one half of Nightcap. “We did one or two of those and they did really well,” and by January of 2018, the team began hosting weekly events — and they’re still at it, to this day. For over a year, Shogi and Cavanaugh have hosted Nightcap every Thursday night from 9 p.m. to 2 a.m. Sometimes it’s just the two of them, but more often than not the pair will invite guest DJs. The first two hours at Squire are set up in a freeform style, where anyone with a USB stick can hop on the decks and mix a few tracks. The first week of every month is open deck all night, inviting everyone — no matter what their ability is — to play a 30-minute set.

“We get a variety of skills during our open deck,” said Shogi, from people who have been DJing for years, even decades, to people just getting on the decks for the very first time. “It’s a laid-back environment, and people just hanging out at the bar are supportive of everyone who gets up there,” added Cochran.

Cavanaugh and Shogi spend much of their free time digging for new tracks, booking DJs and promoting the party. Every week, without fail, they haul over their gear — two Pioneer CDJ Nexus 2000s and an Allen & Heath Xone:92 mixer — across town to any of the four bars they host parties at on a regular basis. And yet, with no hint of irony, Cavanaugh describes himself as, “extremely lazy,” despite the constant creative energy and passion he and Shogi pour into the party.

All three — Cochran, Cavanaugh and Shogi — are far too humble, downplaying the exhaustive effort they put in every week to make sure their party is fun, inclusive and accessible. Every party is free of a cover charge and they encourage their guest DJs to reach out to other artists themselves, facilitating an environment that encourages growth and appreciation. They provide recordings of the mixes from their open decks to bourgeoning DJs, and every week Cavanaugh, who taught himself how to use Photoshop, designs a new flyer for the event. 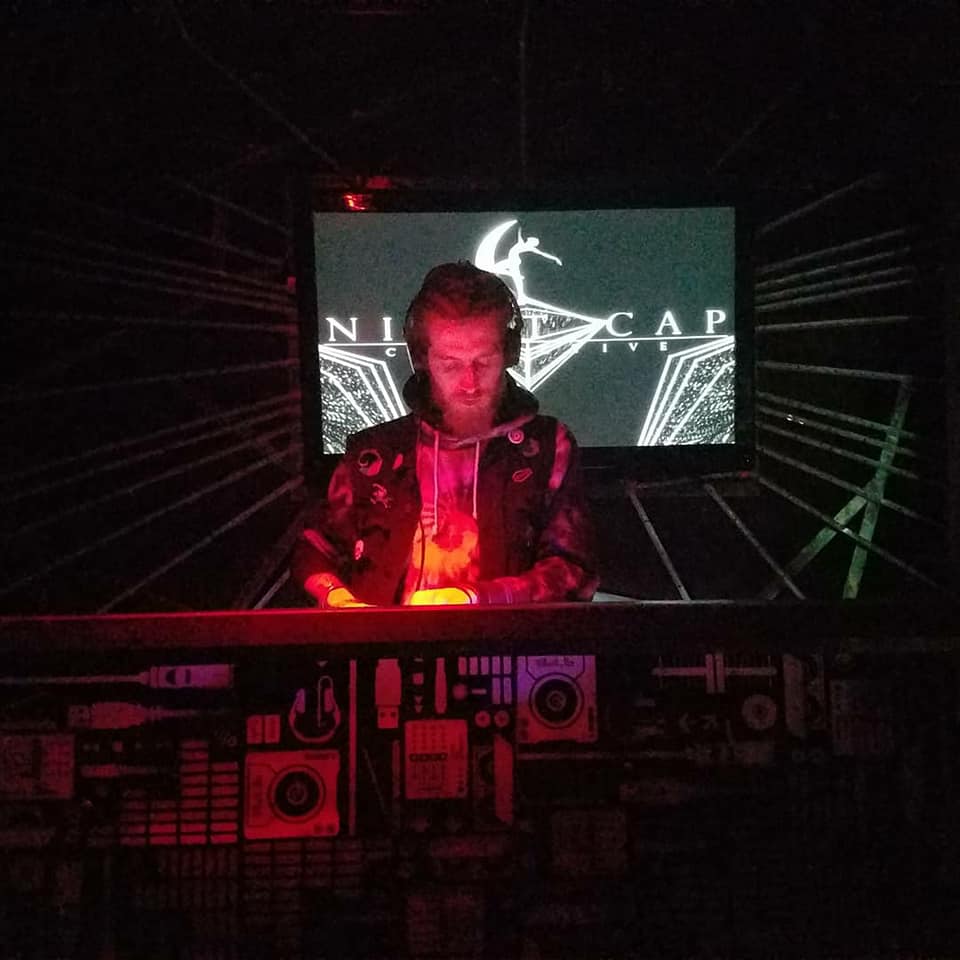 “Putting [Nightcap] together and having compelling shows to offer every week is really a testament to how rich Denver is, in terms of talent,” said Shogi. When they aren’t behind the decks, Shogi and Cavanaugh can be spotted boogying on the dance floor at a multitude of other parties. “The best party I’ve been to recently was Sorted when they brought out Special Request,” said Shogi, whereas Cavanaugh giddily gushed about last month’s sets from Alex Whittier (of Nocturnal) and John Templeton, who founded the now-defunct Great American Techno Festival. Lately, Shogi has been fixing for more acid-house and break-filled tracks, whereas Cavanaugh has been feeling more of a pull towards minimal techno.

In addition to the weekly event every Thursday at Squire, Nightcap also hosts a monthly event the first Saturday of every month at Fort Greene as well as a rotating event at Middleman every so often, where local vendors like Terra Apothecary will set up a pop-up shop. They also play regularly at Lost Lake and Matchbox, spreading their infectious dance grooves to bars all over Denver.