Every year, 303 Magazine nominates musicians, restaurants, designers and even Instagrammers in Denver with awards to celebrate the creative culture of the Mile High City. This year for the first time, we’re including street artists as one of our categories. This comes as a response to the overwhelming support and appreciation of street art and murals in Denver, exemplified in the record attendance and knowledge of the street art festival CRUSH Walls annual in RiNo last year, as well as the ever-growing inclusion of street artists in art shows and galleries. In the last five years, the street art and mural scene has rapidly evolved, putting Denver on the map as a destination to see and experience art in the streets. Although we can’t get enough of all of the street art and the local artists shaping the community, we narrowed it down to five influential people. 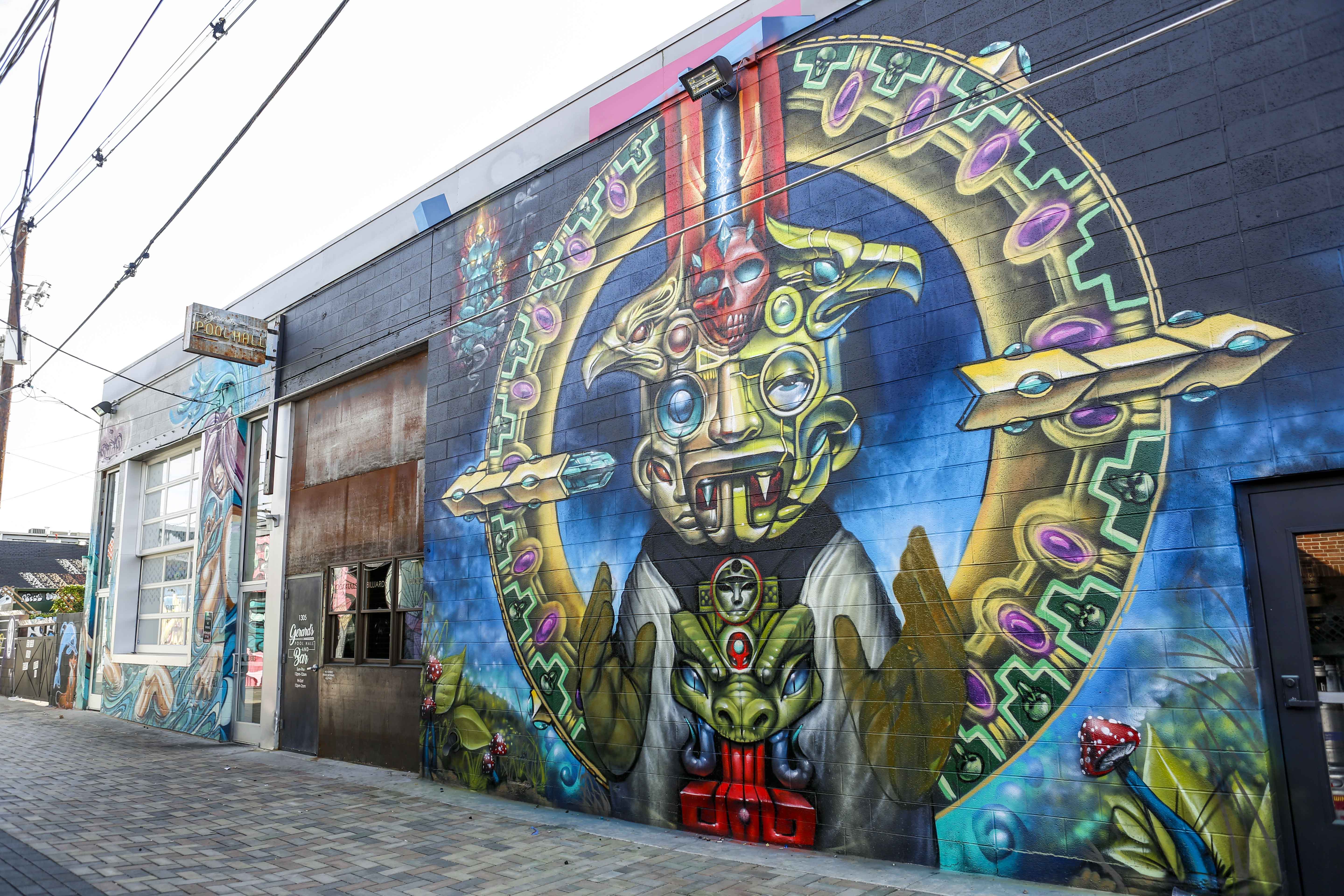 If you want to know about street art, graffiti and anything else on the walls in RiNo, Munro is the guy to ask. Since he founded the annual street art festival CRUSH Walls nearly a decade ago, the acceptance and support of his preferred style of art has dramatically evolved. Munro is not simply a muralist, even if he can accomplish gallery-worthy art on walls with spray paint, because he comes from a background of graffiti writing. Both his street art murals and graffiti lettering skills come together in exemplary works that can be seen all over Denver. 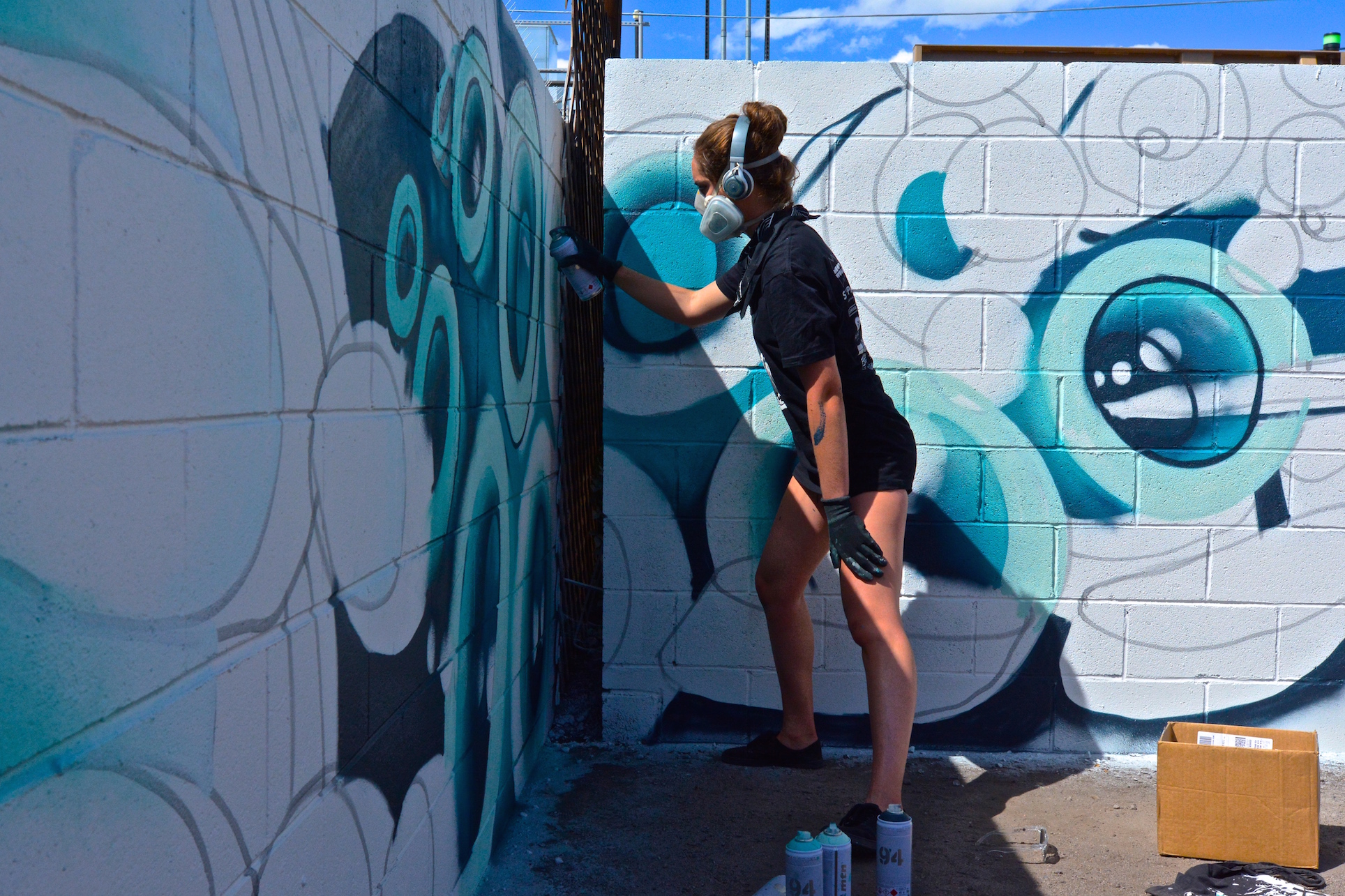 Charney is a traditionally trained artist who stepped into the street art scene a few years ago. Since then, each mural she paints is a new chance for her to master her approach — a mix of illusions and organic shapes. She’s participated in CRUSH Walls, she’s painted live at the Arise Music Festival and she’s designed packaging for a local cannabis company, among many other artistic pursuits. One of her most iconic murals is on the Colorado Ballet building on Santa Fe Drive, and another one is on a half-wall near Matchbox in RiNo (a spot she has painted two consecutive years during CRUSH). Her list of privately commissioned murals keeps growing as well, with projects on or in residential units, coworking spaces, salons and more. 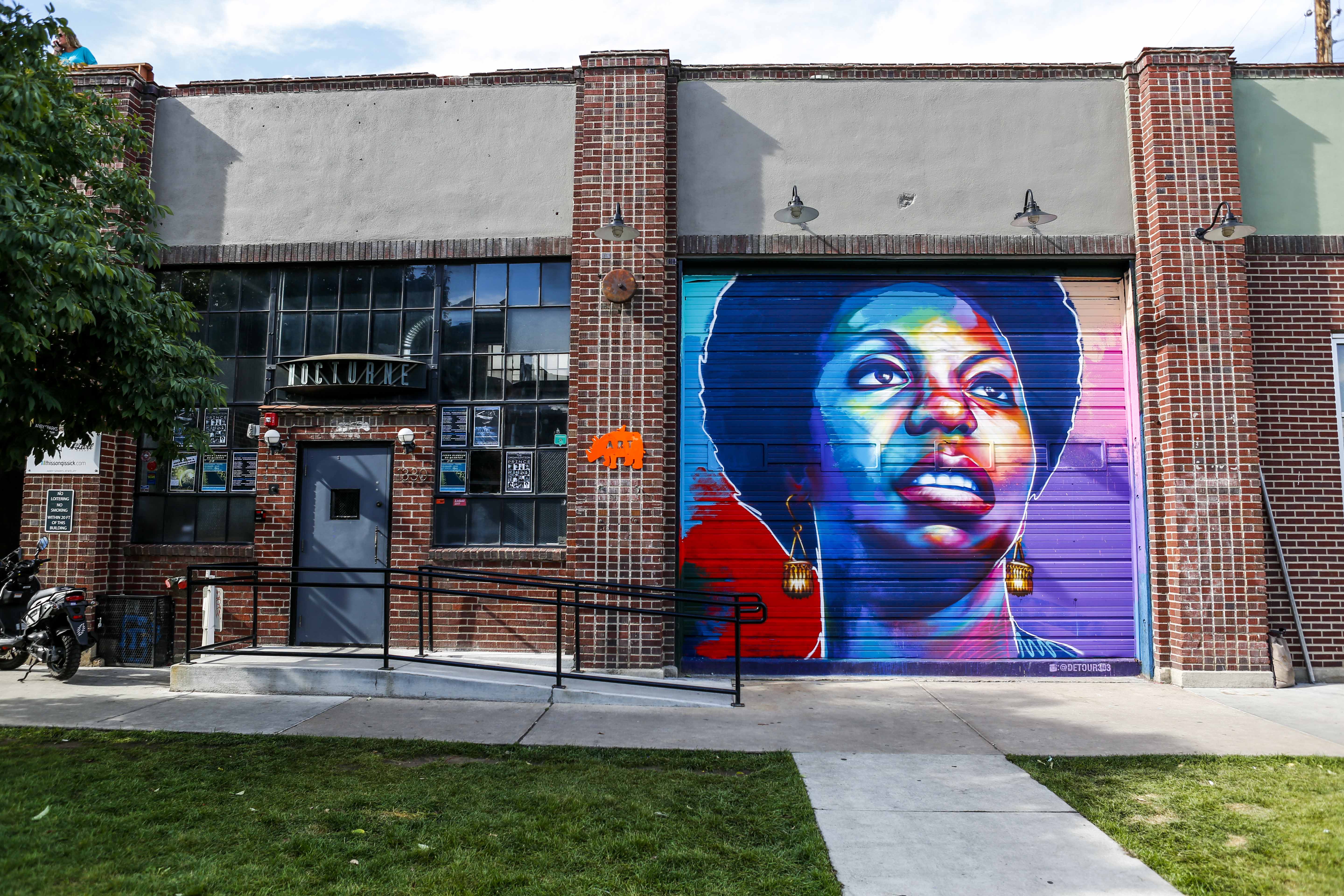 Although Evans first made his appearance in the Denver art scene with breakdancing and DJ sets, for the last five years or so his reputation has grown as a visual artist. His mainstays are larger-than-life portraits that use gestural strokes of colors on the face and skin, with patterned backgrounds ranging from roses to geometry to paint splatters. One of his most iconic mural locations is on the garage bay of Nocturne Jazz in RiNo (pictured above), where each year he paints a famous jazz musician from history. Another is best seen when driving on I-70 near Colorado Boulevard. Some of his other notable projects in recent years include a commission to paint a portrait in his style of Jay-Z and David Letterman for Letterman’s Netflix show, My Next Guest Needs No Introduction, and an ongoing series for the Denver Nuggets to paint alumni players and present them at halftime. 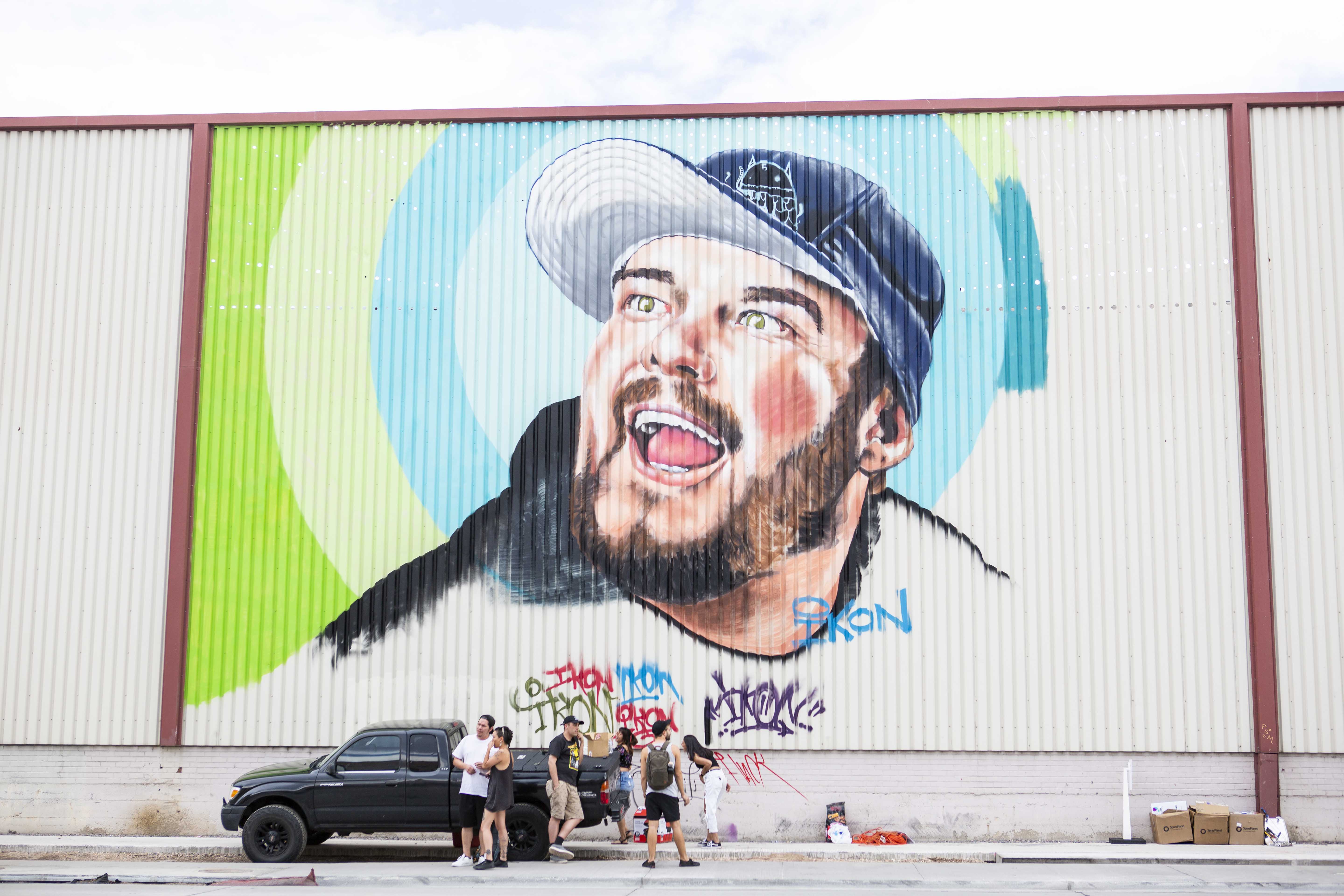 A tribute piece to a graffiti writer who passed away, created by Gamma Gallery during CRUSH 2018. Photo by Amanda Piela

Almost three years ago, Denver-based artist Gamma Acosta celebrated a decade of painting in the streets with a solo exhibition in his home town. As he approaches the middle of his second decade as a street artist, his tireless work and proliferation of Denver neighborhoods easily earn him a spot as one of our nominees. Gamma is adamant about using only free-hand tactics when spray painting, meaning he does not project outlines digitally onto the wall, employ tape or stencils or use any tools aside from the spray paint can itself. His estimates for the number of murals he’s painted in his lifetime extend beyond 500 and some of the ones in Denver have gained national popularity. If you’ve seen any of the neighborhoods steeped in street art in Denver, you’ve most likely seen a piece by Gamma. 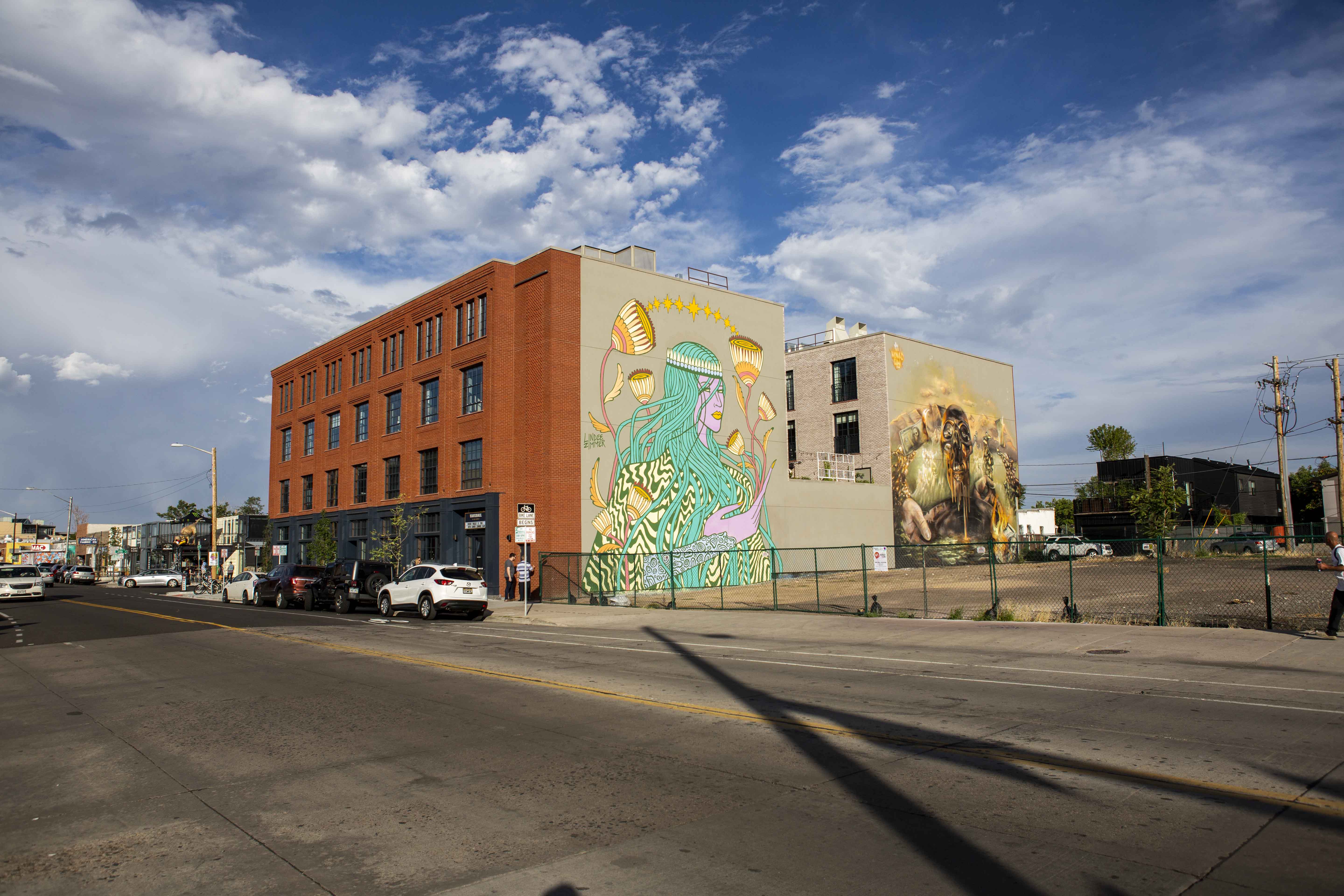 Although Zimmer became a maven of the Fort Collins mural scene during her decade there — and after founding the Fort Collins Mural Project — last year she moved to Denver to pursue more walls and a different community. Just last year alone, she painted 22 murals including the towering woman on Larimer (pictured above). Large format works of art are her forte, with her first mural in Fort Collins measuring at something around 90 feet by 11 feet. Part of Zimmer’s charm lies in her desire to make art accessible to those who weren’t afforded a traditional art education, which leads her to coordinate educational opportunities while she paints.