It seems more and more every month that Denver embraces its art scene. Which is why last week’s proclamation by Mayor Hancock comes less like a surprise and more as a much-deserved award. Hancock officially named January 29, an official Denver holiday to celebrate local art advisory firm NINE dot ARTS.  The firm has spent the better part of a decade shaping and supporting transformative art from the private to the public realm, in Denver and also increasingly in other major cities like Boston, Chicago and Seattle. 2019 also marks NINE dot ARTS’ nine-year anniversary, and so on January 29, the founders want to spend the day giving back to the local art community with an art supply drive. 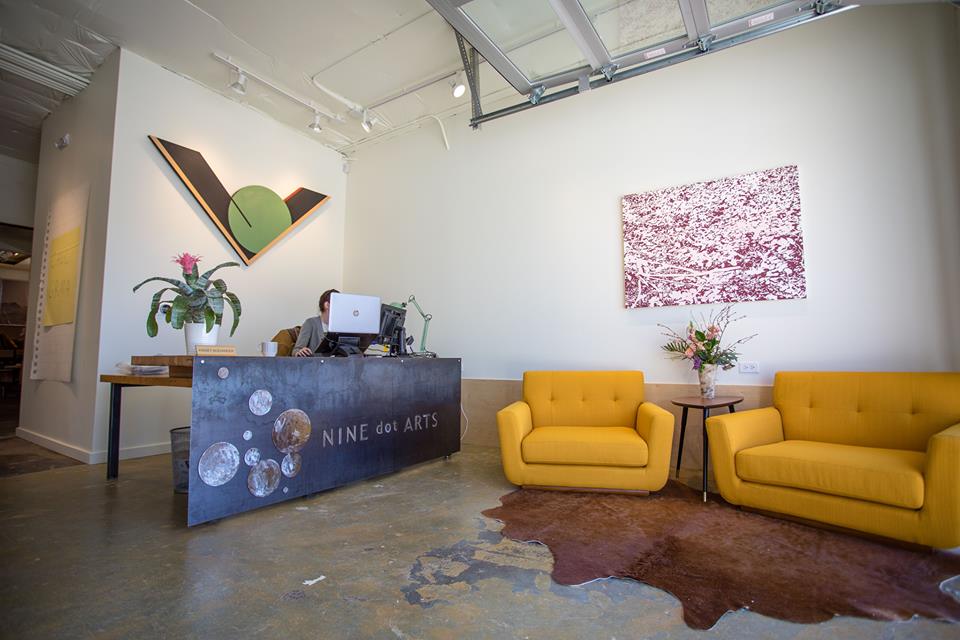 NINE dot ARTS is adept at creating must-see locales in Denver — like The Maven Hotel, the Alley at Dairy Block, The Ramble Hotel and The Crawford Hotel. A space designed with their curatorial expertise serves as more than a restaurant or hotel lobby — it emerges as a destination, an experience and a showcase of incredible artists. In the public art domain, NINE dot ARTS has coordinated with other art organizations like the Denver Theatre District to create The Blue Trees in 2017 — an installation by Konstantin Dimopoulos where trees around the city were painted with biodegradable blue paint — and the Happy City transformation in 2018, among others. To date, the firm has grown from the two co-founders, Molly Casey and Martha Weidmann, to a team of 20 with 300 projects under their belts. “Nine years ago, we embarked on our mission to use the power of art to transform the average business environment… we attribute part of our success to the fact that we started right here in Denver, a community that consistently demonstrates a shared commitment to the arts,” Weidmann said in a press release.

That commitment has only grown with the expansion of Denver’s overall population in the last few years. In 2017, according to a study by the Colorado Business Committee for the Arts (CBCA), employment in the art and culture scene of Denver was at an all-time high and the total economic activity totaled $1.9 billion. People who live in Denver are paying more attention to the arts, and people outside of Denver are starting to come here as an art destination. And NINE dot ARTS wants to set a national, perhaps international, standard for art curation and installations, stemming from their local projects. “While our team has curated art for projects across the country, this new national focus showcases our vision to be the world’s leading art consulting firm, and a commitment to setting industry standards for innovation and creativity,” Weidmann commented.

So on Tuesday, January 29, the city of Denver should do two things to show their appreciation for NINE dot ARTS’ efforts. The first is stopping by the firm’s headquarters (a beautiful space that opened last year) and dropping off any unwanted or unneeded art supplies — a list of the most-wanted items can be found here. The second way to pay homage to the company is to appreciate some of the installations and projects the team has been in charge of over the years. You may still see some of the blue paint from The Blue Trees if you walk by the Convention Center. And there are still artistically designed alleyways along 16th Street Mall from the Happy City transformation. To finish the day, find your way to one of Denver’s most art-filled blocks, where NINE dot ARTS landed 31 artists to create 715 pieces of artwork in total.

From 9 a.m. to 6 p.m. — on the city-wide holiday dedicated to it — NINE dot ARTS will accept art supply donations at the headquarters at 3734 Osage Street.