If you’ve ever eaten a taco in Denver, you’ve likely already tasted Richard Schneider’s work. His family’s company Raquelitas Tortillas sells its products to thousands of restaurants across the state. But, he’ll be the first to correct you if you attribute it all to him. Although he handles a lot of the public-facing side of the Raquelitas Tortillas business, “Little Rich” is quick to tell you that it’s a true family affair.

Raquelitas has been making tortillas in Denver since the 1940s, with Schneider’s family at the helm since the ’60s. They’ve operated out of the same colorfully-painted facility on Larimer Street in RiNo for almost 50 years. Inside, the team makes between 12 and 14,000 pounds of different tortillas per day, using almost all Colorado ingredients. The company estimates that more than 750 Colorado families have been positively impacted by its choice to source ingredients locally.

Schneider’s official title within the company is “Tortilla Savant,” and you’ll find him promoting their products across Denver with his humor, charm and contagious love for their products, mission and values.

“We know when we make tortillas that we’re making the canvas,” he explains to folks often. “We’re just trying to make a compelling canvas. We aren’t the star here, the chefs are.” 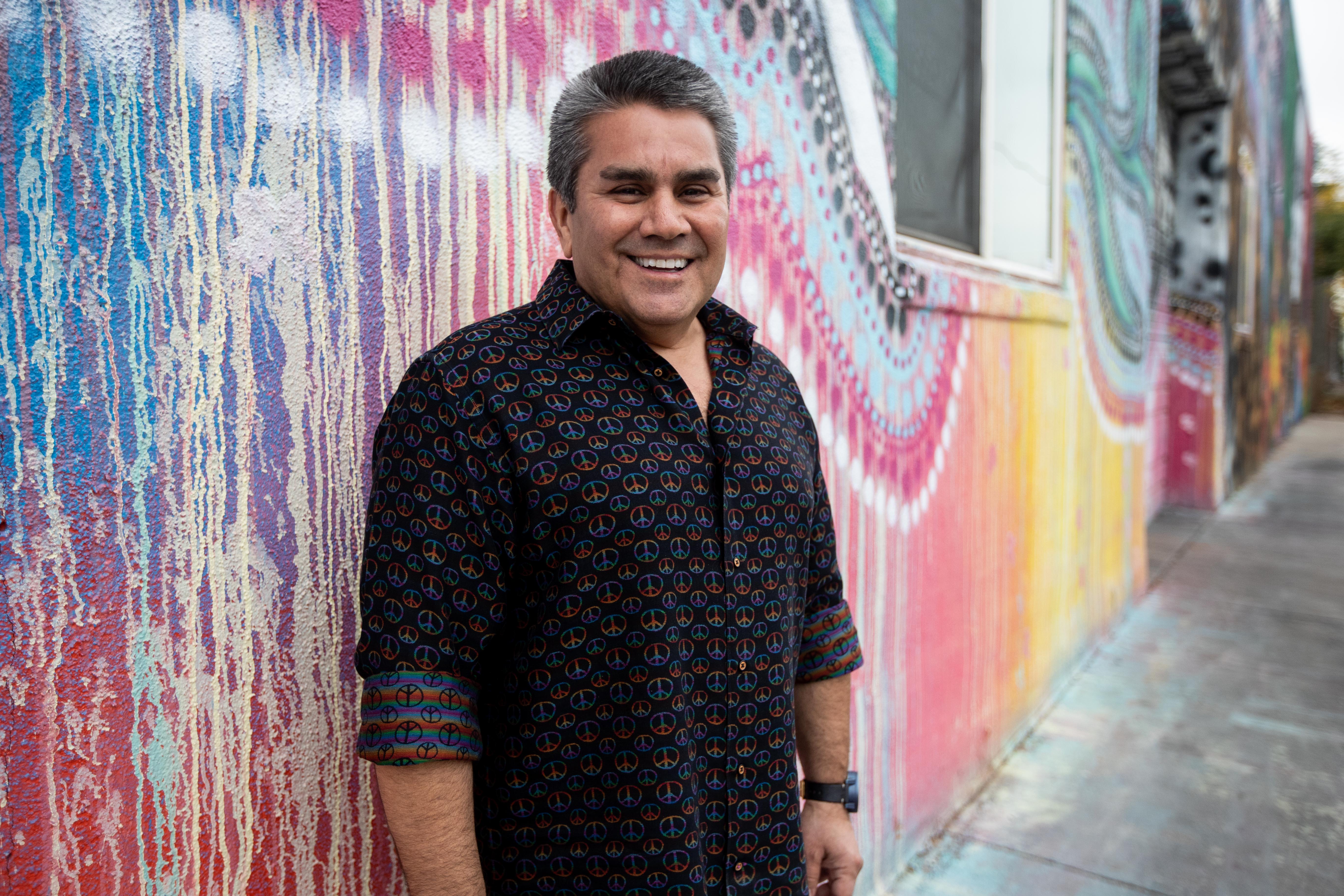 303: When you were younger, what did you want to be when you grew up?

Richard Schneider: It had nothing to do with tortillas, that’s for sure. When I was young, I wanted to get into broadcasting. I loved the idea of stand-up comedy, and I had a lot of fun with that in my past.

303: Did you ever have any other job? Or have you always worked in the family business?

RS: I came into this after high school, but I’ve tried several other things in my adult life. I tried real estate, I tried stand-up comedy, I invested in a nutritional supplement company.

I was always working with Raquelitas during those times, except when I worked on the nutritional supplement company… I tried to start that business not knowing a thing about marketing, brand positioning or anything. Trying to go into a space like supplements, which is all about that, without that knowledge? Let’s just say I thoroughly got my ass kicked.

I lost everything I had. I came limping back. I remember sitting down in a restaurant with my brother and saying, “Is there still a place for me here?” And he was like, “There’s always going to be a place for you here if you want to come back.” We’d never tried any marketing of the tortilla products, so that experience with supplements made me want to dive into that when I returned. We’ve always had a story here, we just weren’t telling it. Now we are.

303: Your older brother Raul De La Torre is the president of the company. What is it like working with your brother?

RS: I’ve been working shoulder to shoulder with my brother for most of 40 years. I don’t know if there’s ever been a time that we’re closer than we are right now. We’ve grown to appreciate what the other one can bring — we’re like yin and yang. There are things that each of us loves to do, and now we just let each other focus on those things. It’s been the best thing ever — I wouldn’t want it any other way. Most of the time, we even go on vacation together.

303: What advice do you have for people who want to go into business with family?

RS: This is where it gets interesting because I don’t know that I would tell people to do what I have done. For most people to go in that direction, I’d say no. A lot of times I see that it doesn’t work. It’s not always the right combination of yin and yang. For a lot of people it doesn’t work, but for me and my brother and this business? It’s been wonderful. Irreplaceable, really.

It’s easier for Raul and me because we have the same goals. We obviously want our business to be profitable, but we want to be known for something. We want to leave the industry a little better than how we found it. We want to create positive change and impact others. That’s how we want to measure success.

RS: No. I burn the shit out of everything. For the safety of myself and those around me, I don’t cook. I eat in the restaurants that we work with all the time instead. Very seldom do I eat at home.

I was in the kitchen with one of our restaurant partners the other day, and they handed me a chefs jacket to put on to play sous chef for the day. I wouldn’t even wear it. I haven’t earned that. I don’t have those skills. I’m not a chef. Wearing that would be a disrespect to them. I’m the guy that makes the paints, but I’m no artist.

303: If you could eat one thing for the rest of your life, other than tortillas, what would it be?

RS: Argh. That’s hard. What came to my mind first was tacos and nachos. But I really like Italian food. I like the bold, stronger flavors. Right now, I love Cranelli’s in Lone Tree.

RS: We want to make the “tortilla pie” bigger in Denver. Not just fight for our business to grow, but to truly just have more restaurants using tortillas. Tokyo Joe’s, Bijou’s — we’ve got some untraditional restaurants coming on board and redefining what can be eaten on a tortilla. Now, will that action help some of our competitors instead of us? Probably. And, that’s okay. We can’t make every tortilla in the world — we don’t want to. I think people often misidentify their competitors. Our competitor isn’t other tortilla companies, it’s bread.

303: But, in recent years you’ve decided to focus more on selling in Denver than other cities and states, right?

RS: Yes. We used to sell to restaurants across the country — in Arizona, Texas, the Carolinas… but we’ve retreated back. Production hasn’t slowed, but there’s more of a demand at home now. At the end of the day, we want to dance with the folks that brought us to the dance. If we can exclusively serve this market now, why wouldn’t we?

303: A lot of people in the restaurant community know you. But, what’s something about you that most people don’t know?

RS: I’m pretty much ‘what you see is what you get.’ But, if I had to choose something, I’d say that people probably have no idea how strong my faith is. You can read a lot of business books, but I get a lot of what I do from the Bible. Following my faith, applying those principles and being careful with who I do business with have all helped us every time.

303: What is something that you think the Denver restaurant community needs to hear right now?

RS: Overall, I don’t think the general market conditions here aren’t going to improve as much as they have in our rearview mirror. In other words, to try to sustain all of the restaurants that have opened up… I don’t think that’s sustainable long-term. But, I do think that the food here is better than ever. It’s just going to keep improving in innovation and quality. I think the people who recognize that and adjust their path will succeed. Those who stick with, “Well this is how I’ve always done it,” will fall into that ocean of mediocracy and probably fade into an oblivion.

303: This last question comes from our last interviewee, Robert Muratore — Were there any particular stories from art, literature or cinema that inspired you to become a successful entrepreneur?

RS: If I can include architecture in art, I would say Frank Lloyd Wright. I’m extremely motivated and inspired by his work. He was so forward-thinking and ahead of his time. I don’t think people really appreciated what he was building and designing until long after he was gone. Every year I take a road trip to see different structures he’s built. I really appreciate his focus on functionality and use of indigenous materials — it’s something that we do with our tortilla ingredients too.