Redefining the Bakery at Rebel Bread

Rebel Bread — the most recent addition to The Denver Dough Collective (DDC) — is now serving the Mile High a slew of unusual baked goods from a storefront location at 24th and Curtis Street. Head baker and co-owner Zach Martinucci leads the project and pushes creative boundaries when it comes to redefining Denver’s dough and personalizing the centuries-old art of the oven.  With an expanding list of niche Denver clientele, a mission to educate the community and a rebellious approach to classic baking standards — Martinucci launched his one-of-a-kind bakery in October with the hope it’ll push the norms when it comes to breaking bread at the dinner (or breakfast) table.

“There is a strange, telling element around food, but part of challenging the relationship is that this is more here than something to eat. There is more of a connection here,” said Martinucci.

Rebel Bread made its debut in early August on the shelves of some of our favorite coffee shops and today it can still be found behind the counter at Huckleberry Roasters, Sapor Coffee + Concepts, Blue Sparrow and Amethyst Coffee. As of this month, you can now bypass the middleman and go straight to the source four days a week by visiting the new tasting room. 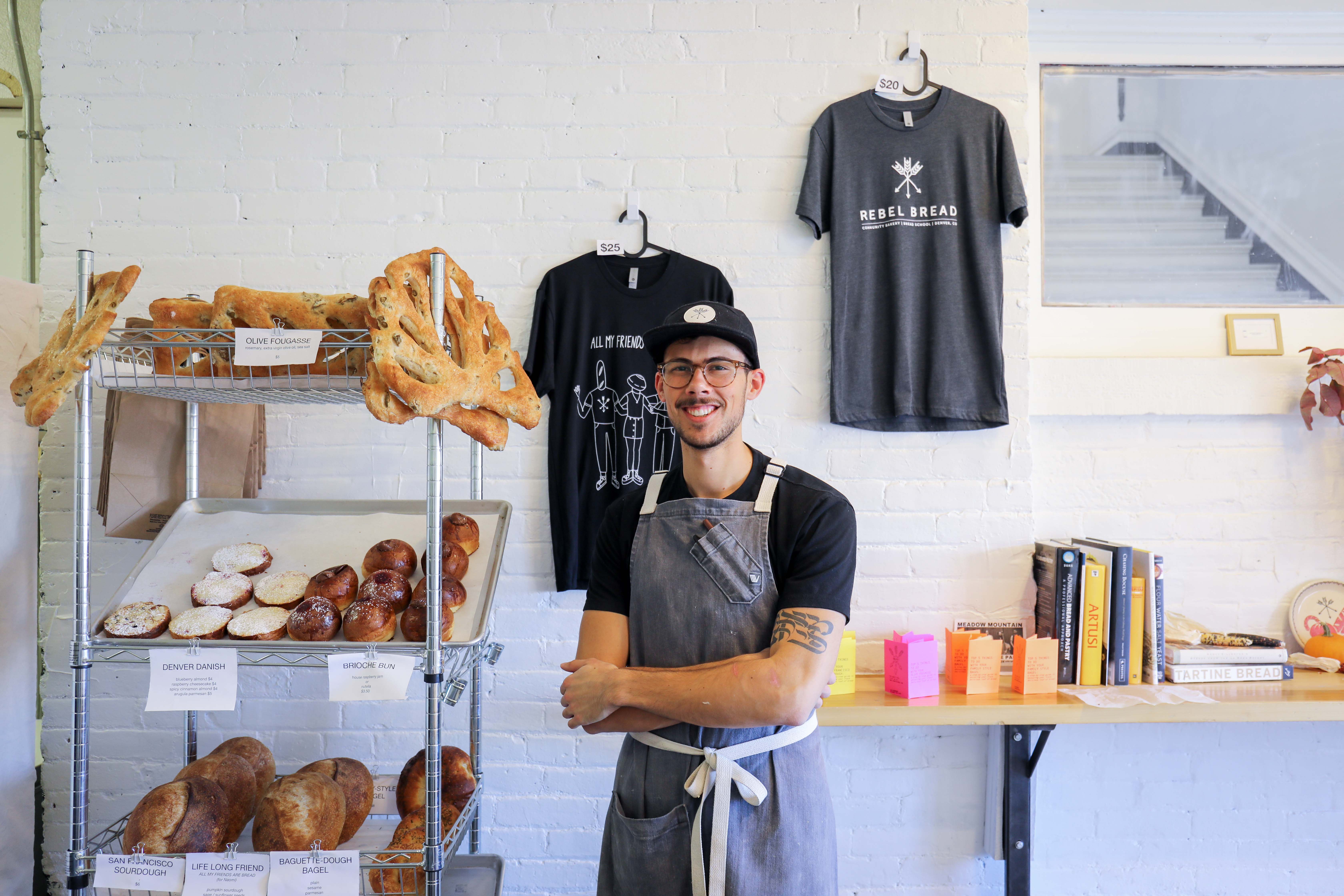 Martinucci curated an affinity for baked goods on the west coast — studying culinary anthropology at UCLA and eventually graduating from the San Francisco Baking Institute before landing himself in Denver in late 2017. It was while cooking in college Martinucci seized an opportunity to expand his studies overseas, exploring Tuscany and anchoring down in Bologna where he solidified a classic foundation and respect for the fundamentals from which he developed his unique taste for innovation. An innovative personality has become a defining characteristic of the Rebel brand — whether it be gigantic family-sized bagels, a long-lost classical French pastry or just downright unexpected flavor combinations — Rebel bread defines outside-of-the-box baking.

From the curbside, it’s apparent that Rebel Bread identifies as something more than the traditional mom-and-pop-style bakery. If the wafting smells  of fresh baked goodness don’t coax you to the front door — keep an eye out for their black and white sign that reads “Let’s be Bread Friends.”

This motto, though, is more than a cheeky saying — camaraderie is at the heart of the bakery. Rebel has made a home for itself amongst four other brands at a blacked-out corner kitchen addition to the bricked commercial building in Five Points previously occupied by Temple Bakery. Standing at the front door, guests glimpse the entire operation. A counter style service leaves nothing to the imagination — an honest view over the counter, through the kitchen to the back door is humbling. Open ceilings, polished wood counters and a stainless steel espresso machine complement a rolling display of the day’s selection of baked goods. Pick from the display, order a coffee and be on your way to work, home with a fresh loaf or if you’re lucky, you can snag a seat at one of the four chairs, at the two tables on the patio —at the moment the only available seating on-site.

The storefront paint job reads “Bakery” but that is just the tip of the iceberg. The corner kitchen identifies as Rebel Bread in the mornings before transitioning to Five Points Pizza in the evening. Little Bites Bakery makes up the third component of the collective and while this concept does not sell product on site, it does cater off-site events and contracted delivery orders. Rebel and the DBC also call  Heirloom Catering and Element Coffee “roommate companies” as they too operate on the same premise. Element Coffee turns small-batch craft beans and is offered over the counter at Rebel which currently functions as an exclusive tasting room for the local roaster.

Highlights from over the counter include the olive fougasse ($5) — a salty/savory herbed dinner bread which is baked with minced pieces of green olive. The kitchen also offers four variations of The Denver Danish ( $4 – $5) which should make a Denverite proud to call this their designated hometown pastry. Sweet, spicy and savory versions include blueberry almond, raspberry cheesecake, spicy cinnamon almond or arugula parmesan and have been designed in a method similar to the French Bostock. What makes the Bostock is the texture — it bites soft, then turns chewy while offering an even spread of cream cheese at each bite. Must haves on the savory side of the line include the rosemary bagel ($2) — chewy-soft and coated in the herb — this is a hybrid bagel/artisan creation. The San Francisco sourdough ($6) is a gift. Every gluten connoisseur should recognize San Fran as king of the sour — who better to bring us our own variation of the iconic yeast strain than a Bay Area-bred baker?

Martinucci loves pushing the standard for a classically trained baker but offering unusually delicious confections is truly only the surface of his Rebel Bread Concept. Educating and enriching the community make up the fundamental backbone of the bakery.

“Our mission here [at Rebel Bread] is to challenge the relationship that people have with their food. It is important that we are a presence outside of the doors of the bakery… we have to have some kind of influence on the community” said Martinucci.

Martinucci accomplishes this through educational classes. He kicked off his Rebel grand opening by teaching a series of bagel workshops. Over the course of a few hours guests explored the method and history of the bagel and how to replicate the results it in a home setting. The educational element of Rebel Bread offers the public a range of different classes revolving around fundamental baking methodology and ideally teaches attendees a skill they can take home, teach their friends and use for the rest of their life. Martinucci aims to cover the essentials — how bread works, from preferments to scaling to proofing and baking. The next scheduled workshop is set for November 2 and will offer guests a tutorial on Tigella — a doughy, grilled, English-Muffin-like flatbread — and will include cured meat pairing pairings from Il Porcellino.

There are plans in place to host routine educational classes which will including intensive two-day courses that cover complex methods and recipes like sourdough. During bake times attendees will stroll to the neighboring Woods Boss Brewing taproom to sip craft beers while their confections bake a few blocks away — get a buzz on — and arrive back at to the Rebel Kitchen to fresh baked goods they baked themselves earlier that same afternoon.

Rebel Bread offers a new type of innovation when it comes to raising dough in Mile High. Not only does the concept blend modern and classical methods of baking — but its millennial owner Martinucci has nuanced his communal bakery to include a tasteful respect for the fundamentals and a passion for educating the community around him.