For the last decade, the Museum of Contemporary Art (MCA) Denver had Adam Lerner at the helm. During that time, the museum doubled its audience, attracted a younger crowd, forged new paths for all artistic institutions nationally and exhibited masterful artists like Marilyn Minter and Jean-Michel Basquiat. One of Lerner’s most-talked-about accomplishments was putting together the first solo exhibition of DEVO co-founder Mark Mothersbaugh (Myopia, 2014) which was accompanied by a book and traveled to other cities after Denver. Under Lerner’s guidance and direction, the MCA became an even-more unique hub to showcase creativity in Denver — which makes the news of him stepping down from his position even harder to take.

This morning, Lerner announced that he will not renew his contract with the MCA in June 2019. 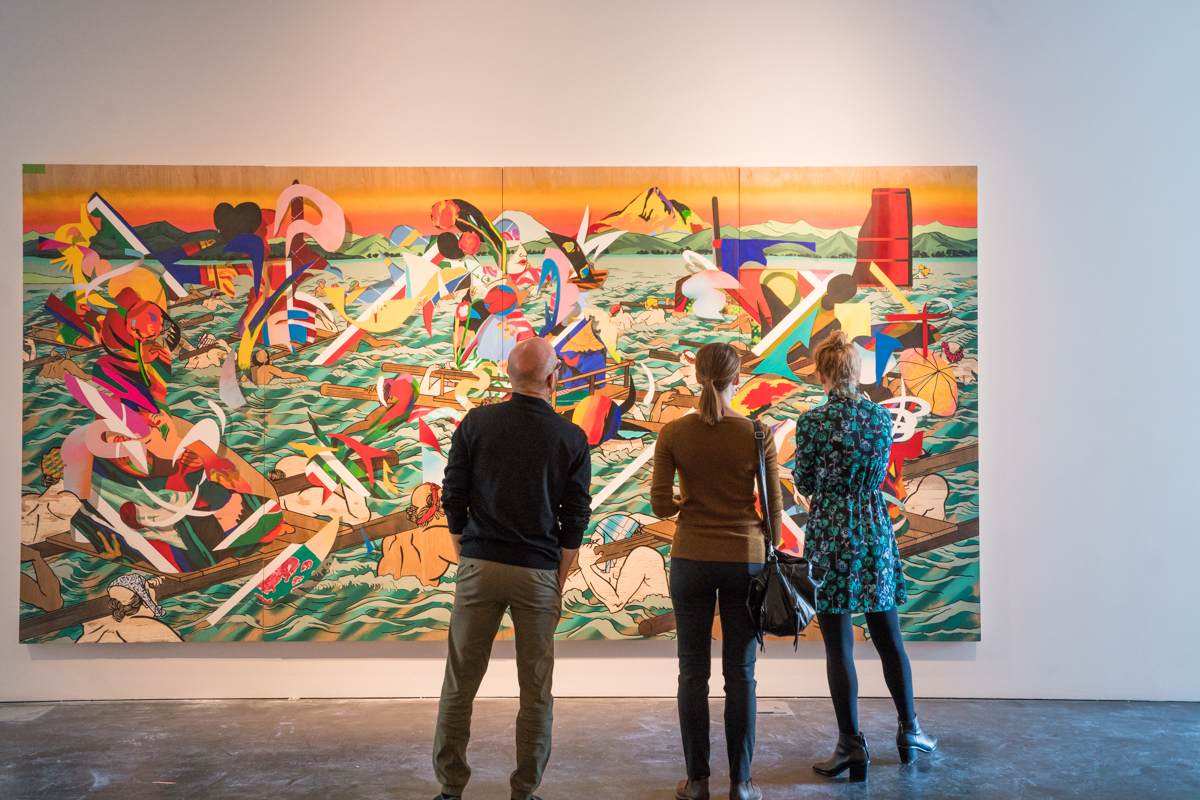 Lerner (left) discussing a piece by Diego Rodriguez Warner to Cori Anderson and an MCA employee. Photo by Meg O’Neill

“I took very seriously my decision not to renew my contract. For the past 10 years, I have greatly enjoyed fostering the growth of a museum that now pulses with energy and captures the imagination of wide audiences,” said Lerner in the official press release. “I am grateful to my board for entrusting me to reimagine what an art museum can be, but now I want to try my hand developing creative ventures from outside the platform of a museum. My success so far has always come from my willingness to depart from established paths and I’d like to continue off-roading. I’m excited to explore new endeavors, working with creatives and artists, broadly defined, to further enrich our city and impact people’s lives.”

The silver lining, for fans of Lerner’s curatorial experience and exploratory tactics, is that he plans on staying in Denver after his departure from the MCA. Lerner’s achievements at the MCA display his unmatched ability to seek out innovative and groundbreaking art and presenting it in an approachable — and fun — manner.  This model, which combines education and artistic production with curating exhibitions, not only levitated the MCA’s status in Denver and internationally, it reshaped the conversation of art museum employees, curators and directors permanently. Because of Lerner’s approaches, the MCA was able to secure major exhibitions and then travel with those shows to 26 museums around the world. And even though the high-profile artists and exhibitions were a key part of Lerner’s tenure, he also took many risks with the art, programming and other events at the MCA. Any institution in Denver, once he leaves the museum, would be lucky to have him on board.

Mark Falcone, former MCA Denver board chair and trustee emeritus commented, “Adam understands that art and creative expression cannot exist in a vacuum and throughout his career in Denver, from roles at the Denver Art Museum to The Lab at Belmar to the MCA, he has worked to break down barriers and create unforgettable experiences for visitors. Our Museum and the Denver cultural community have been changed for the better thanks to his imagination, vision and collaborative spirit.”

Although Lerner will leave the MCA, his mark on the museum will remain. His adventurous spirit and keen eye for emerging artistic trends (or perhaps for starting the trends himself) will be missed, even if many visitors did not ever know Lerner by name.

The Board of MCA Denver will form a search committee to conduct a national and international search for the Museum’s next Director.