Vintage Sticker Collages Take Over Station 16 Gallery at The Source

–
Stickers have become so common, it’s hard to imagine a time when they weren’t. Now, we see stickers on cars, signposts, windows, water bottles, computers — and there are even entire brands devoted to producing them. But, perhaps because they are so prevalent, many people overlook the place stickers hold in popular culture and the design efforts included in making them.

Artist Reed Weily, however, uses stickers as the medium for his creations. Gathering stickers from all over the world and from times now past, Weily highlights the mesmerizing and addictive nature of sticking an image onto a surface. Fascinated by the small details and vibrant colors of vintage stickers, Weily layers thousands of them to produce a single image. These collages are mosaics of pop culture, featuring cameos from big corporations like Pepsi, Ford and Polaroid as well as stickers from indie brands, of comic book heroes and the ones used by school teachers to give kudos to their students. There are so many stickers in each one of his pieces, stacked and added to one another, it’s nearly impossible to see the entire roster. Layering also adds a sculptural element to Weily’s pieces, especially the ones that resemble skulls or human heads. 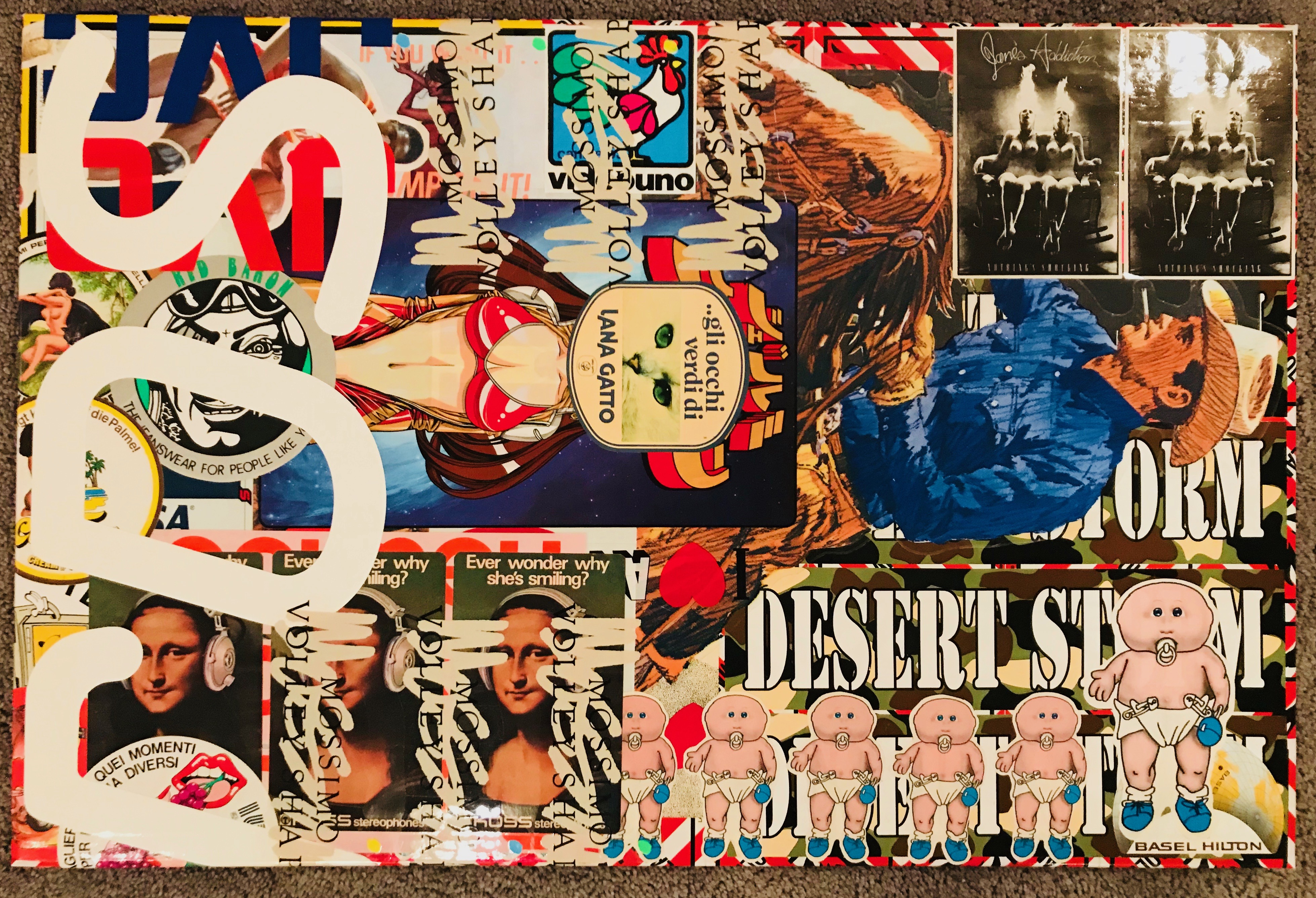 But in order to fully appreciate Weily’s work, viewers must stand in front of one and try to filter through the smorgasbord themselves. Starting tonight and for the next three weeks, a selection of his collages is on view at the new Station 16 Gallery in The Source Hotel in an exhibition called STICKER SHOCK. Station 16 is a gallery based out of Montréal — known for its connections with street artists and the urban art world — and was one of the organizers of Denver’s CRUSH festival at the beginning of September. Weily’s show marks the official grand opening of the gallery’s first satellite location outside of Canada, and his use of stickers is a fitting tribute to a section of pop culture Station 16 adores, while still presenting a gallery-worthy exhibition.

Stickers, aside from their use in advertising and marketing, have been widely adopted by graffiti writers and street artists for decades. One of the most notable sticker campaigns was Shepard Fairey’s OBEY series — which he started in 1989 when he was going to the Rhode Island School of Design (RISD) — where he simply printed the same sticker en masse and posted it wherever he could. This action is now called “sticker bombing” and often results in certain surfaces receiving hundreds of layers of different stickers. Just take a stroll down the alleys in RiNo and you’ll notice electric boxes and dumpsters that barely show their original surfaces.

In this way, Weily pays tribute to the place sticker bombing has made for itself in the rise and acceptance of street art. Instead of a common gathering board for different people to put their stickers, Weily places each sticker himself but does so with the same irreverent stacking — some stickers only showing part of their design, others taking center stage. Though this kind of layering can at times be chaotic, Weily manages to create cohesive compositions, and striking ones at that.

STICKER SHOCK is on view October 4 through 21, 2018 at Station 16 Gallery, located inside The Source Hotel.

All photography courtesy of Station 16