All photography by Kate Russell

With all the hype about Meow Wolf, and especially with the Denver addition to their permanent exhibition repertoire, it’s refreshing to know they are focused on speaking candidly about their corporate social responsibility. But after attending a meeting at STEAM on the Platte about that very topic, it became clear that Meow Wolf’s efforts toward creating a “gold standard” for all creative-fueled industries may have partly stemmed from Denver’s concerns. And it’s not the City of Denver, it’s the people in the communities that may be impacted by Meow Wolf — artists, activists, business owners, disabled citizens and parents, to name a few. With a lengthy list of goals, Meow Wolf outlined how they hope to become a good neighbor to the communities they will affect in Denver and how those hopes have been informed by the communities themselves. 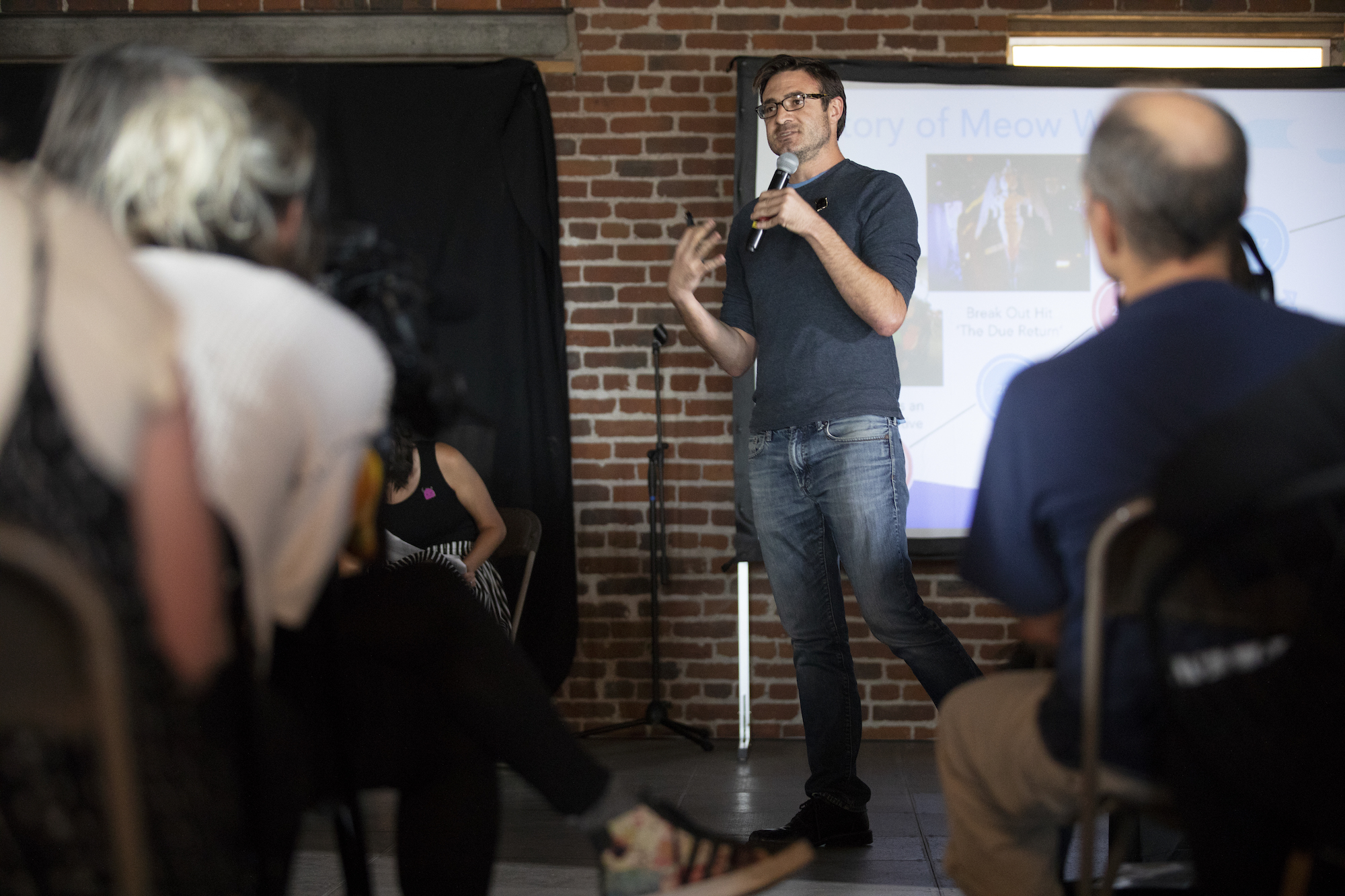 Vince Kadlubek, CEO and co-founder of Meow Wolf speaking at the meeting.

When Meow Wolf announced their plans to construct a 90,000 square foot exhibition in Denver’s lowest-income neighborhood, Sun Valley, there was an immediate — and unexpected, according to CEO and co-founder Vince Kadlubek — response.

“The first day we announced [Meow Wolf Denver] I got a Facebook comment from Zoe Williams saying ‘what are you going to do about the people in Sun Valley?’ And I replied to her as Meow Wolf saying ‘I don’t know, can you help?’ Then I privately messaged saying ‘seriously though, we can use your help.’ Our Denver team was also wanting someone to help with the transition and so her reaching out like she did was an amazing moment. It developed the relationships that have led to a day like today.”

READ: How Sun Valley Will Change in the Next Five Years

Though the comment could have been construed as some kind of backlashing, Kadlubek insisted that it made Meow Wolf think twice. 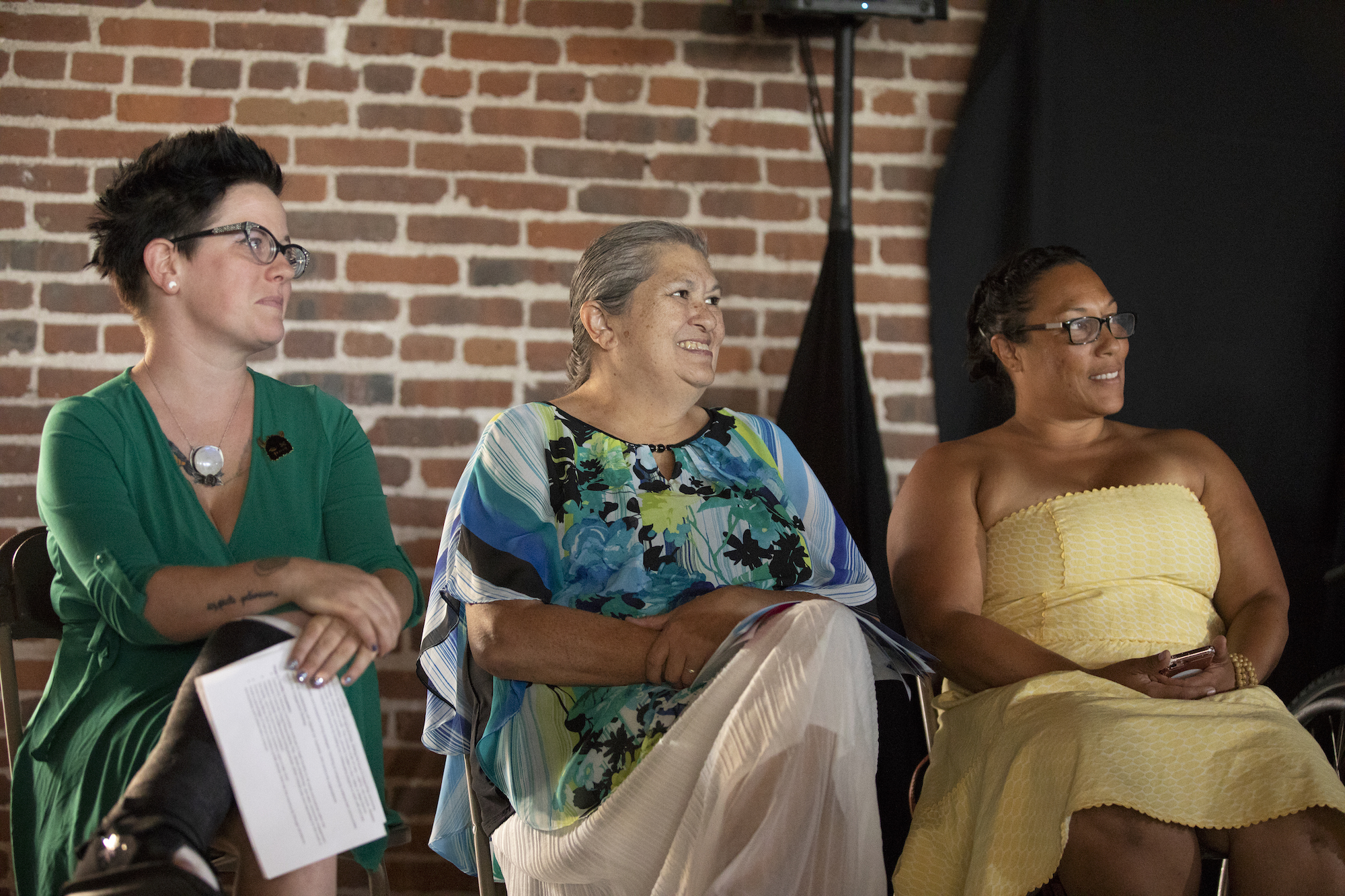 Hit with the realization that their immersive art installations are now far more than the ragtag exhibits they used to make after dumpster-diving and scrounging around for materials, Meow Wolf has responded to Denver’s concerns with an increasingly organized plan. They stressed their commitment to Denver at the meeting by having their Denver team members speak about the major guidelines that make up their corporate social responsibility strategy. Fifteen of those team members are part of the Community Advisory Committee (CAC) which formed in May 2018 and is comprised of Sun Valley residents.

Mary Lovejoy, an artist and activist in Sun Valley and member of the Meow Wolf CAC stated, “the privilege of being on this committee is wonderful because not only do I have a voice and not only do I get to express the concerns of the community and not only do I have questions to answer, I also have experience in being here [in Sun Valley]. They have taken this process and made it so it benefits us and Denver and the community. And now we are related to New Mexico with this sister museum. That’s something that I learn as I get older — we are all so connected.” 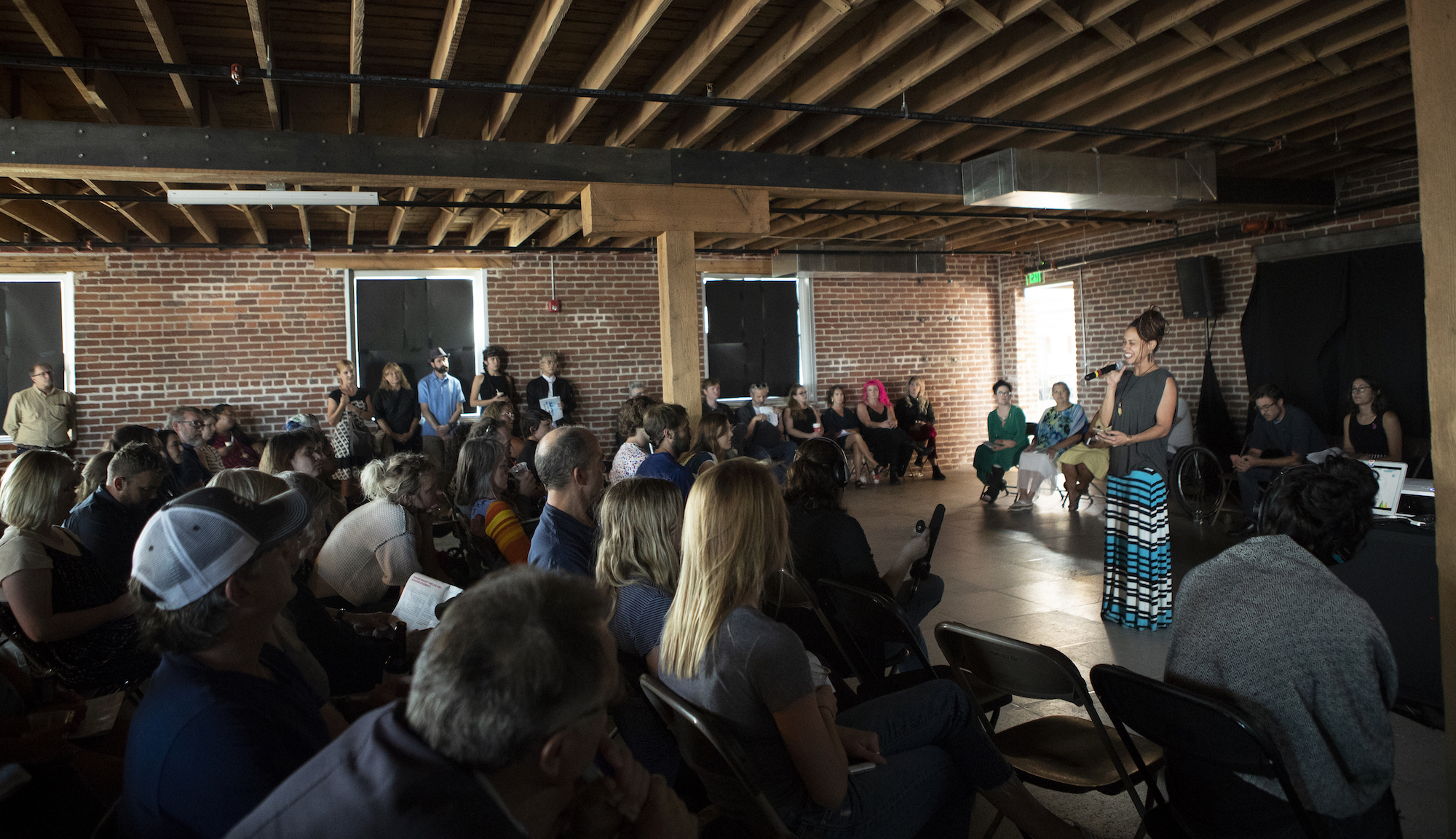 Broken into four major pillars, Meow Wolf’s corporate social responsibilities follow the main cornerstones that Sun Valley is focused on, with the redevelopment of the neighborhood beyond Meow Wolf’s construction. Respect for the community, the artists, the environment and for an inclusive economy are how Meow Wolf phrases the guidelines, although once each one is dissected it’s easier to see how similar to Sun Valley’s goals they are. And that makes sense, considering the CAC helped make the plan — along with other Meow Wolf managers and employees — based on their concerns about gentrification and displacement due to the intrusion of developers, like other communities in Denver have faced.

Respect for the Denver community was placed first in the slideshow at the meeting, where the Meow Wolf team detailed the duty of the CAC and discussed the impressive amount of money they’ve funneled into nonprofit organizations, event sponsorships, programs and workshops, education and in-kind support ($250,000 in 2018). That section also included the announcement that the Denver exhibition will offer resident discounts and also be 90 percent ADA accessible, up 20 percent from their Santa Fe installation.

“When we started this business, it was not about money. It was about a platform, and creating a platform for good in the world and for good to artists. The money helps — we’ve given back over $500,000 in our first two years to 501(c)(3)s, to DIY spaces, to art projects — the more money we make, the more we give back. But our intention has always been about what good we can do,” said  Kadlubek.

Respect for the artists outlined Meow Wolf’s ultimate goal — to pay artists good wages and support the artists they can’t employ directly. But the somewhat unexpected — and much appreciated — addition to this section was the guarantee that Meow Wolf’s Denver exhibition will have 40 percent of the design elements dedicated to Colorado-based artists.

Respecting the environment, according to Meow Wolf’s goals, includes everything from using completely biodegradable serving materials, recycling at all the locations, using local vendors whenever possible, reducing waste during construction by reusing demolished materials and selecting drought-tolerant plant species for green space around the building. But the one that caused a small applause during the meeting was the goal to have solar panels on the Denver facility by 2025 — though the rest of the goal lowered expectations by stating “striving for 30 percent energy generation from renewable sources.”

The final pillar — respect for an inclusive economy — is where some of the most direct impacts on Denver and the Sun Valley community can be found. The bullet points are gender and racial equity, women and minority-owned contractors, a safe workplace, living wages, employee benefits, local hires and disability inclusion. Within those bullet points, Meow Wolf went so far as to commit to having 30 percent of their subcontracts come from women and minority-owned businesses, which is higher than the industry average. Williams — the (now well-known) Facebook commenter and community organizer in Colorado for 20 years — explained at the meeting, “one of the most important things I was thinking about when I heard a big company was coming to Denver, a company that was planning on hiring a lot of people was  — what kind of jobs are there going to be and who is going to get them?”

Meow Wolf responded with strides in the right direction, promising to provide health insurance, access to mental health care, LGBTQ support, paid time off and a myriad of other benefits that the artistic crowd usually never sees from their employers — if they have employers. Plus, the plan set forth a timeline for “designing hiring practices that ensure jobs for Sun Valley residents and neighboring zip codes.” 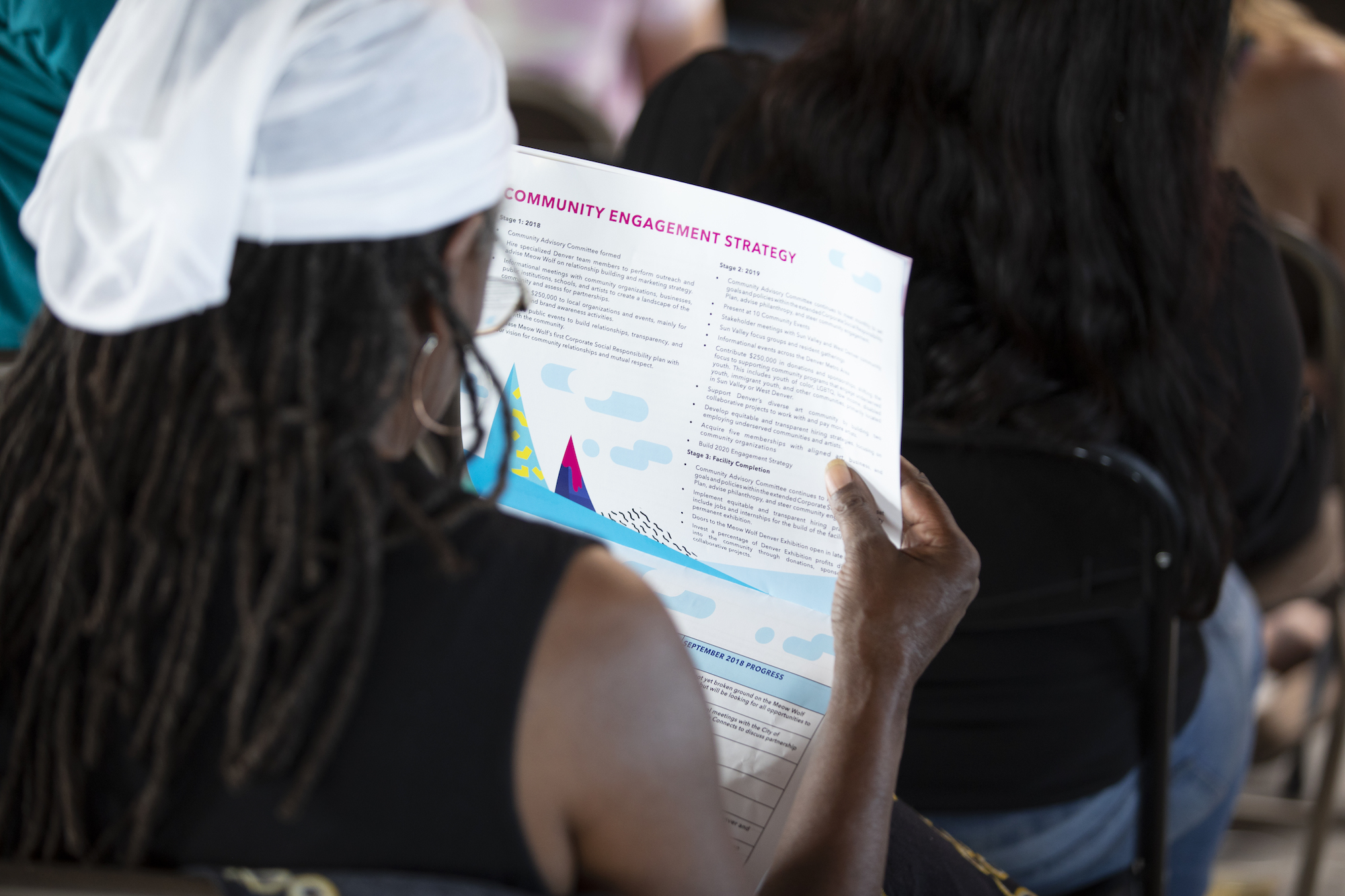 At the meeting, most of the people in attendance were in agreement with Meow Wolf’s plan and offered positive encouragement. In the end, even if some in the Denver communities may have doubts about the artist-collective-turned-multi-million-dollar-enterprise, Meow Wolf’s commitment to receiving constructive criticism and trying to address it might be proof enough that their artistic productions may not be the only thing they wow people with. But in the meantime, we can be sure that Sun Valley and the rest of the Denver communities who care about Meow Wolf’s development will be keeping a close watch.

All photography by Kate Russell, courtesy of Meow Wolf