If eating a multi-course meal while watching a segment of an animal be sliced into its various component parts sounds off-putting, then Blackbelly’s Bites with Butchers dinner may not be for you. For those who are not squeamish, or are willing to tolerate a certain amount of gore in the name of truly remarkable cuisine and a better understanding of where your meat comes from,  then the monthly series hosted by the renowned Boulder-based farm-to-table restaurant and butcher shop is a sure bet.

Each month chef Hosea Rosenberg and head butcher Nate Singer select a section of the animal to be portioned out live on stage, while a five-course meal made from the corresponding bits is served family-style to a standing audience. This summer was devoted to the pig — the front in July, the middle in August and the hind-section rounding out the hog on September 26. The event can seem a little strange at first, but one bite of any of the expertly-made dishes makes even the most gruesome bits of the dissection surprisingly palatable.

With the recent departure of head chef Brad Daniels — who just a few weeks back took a position at a Vegas outpost from his former Philadelphia-based restaurant group Vetri — Rosenberg had to take a slightly more boots-on-the-ground approach to the evening’s dinner. “We’re gonna start at the foot, which might scare some people, but a lot of what we do at these dinners might scare some people,” said the chef. He prepared and explained dishes, made jokes and took questions over the course of the hour and a half event. The main portion was listed as going from 5:30 – 7 p.m., but a certain amount of meandering, applauding and schmoozing made the whole affair run closer to two hours.

Neither Singer or Rosenberg can remember how long the event has been running. However, both recall that the series was developed as a result of multiple customers approaching the butcher hoping they could convince him to host some classes. “Everybody wants a free lesson,” joked Singer. Both Singer and Rosenberg realized that the classes would not be the best use of anyone’s time — with the butcher taking valuable hours out of his busy schedule to teach people who would more than likely not use the skills in a truly practical way. After the two discussed how to frame a series that was both fun and explanatory, the original version was born. The first event consisted of an hour-long butcher demo followed by a seated meal with multiple courses.

After realizing the dinners required a full-staff to be kept late into the night, they took a hiatus and redeveloped the series, reintroducing it in its modern form. With the new version’s demo and meal taking place simultaneously, the event is both delightful and informative without ever dragging. It also allows patrons to focus their attention on both the food and the animal — the quality of the flavors often overshadowing the more grisly aspects of Singer’s dexterous performance. If the slicing, ripping and sawing are ever overwhelming, there’s sure to be a dish near at hand to satiate the distressed. The complimentary ciders provided by Stem also help to break the tension. 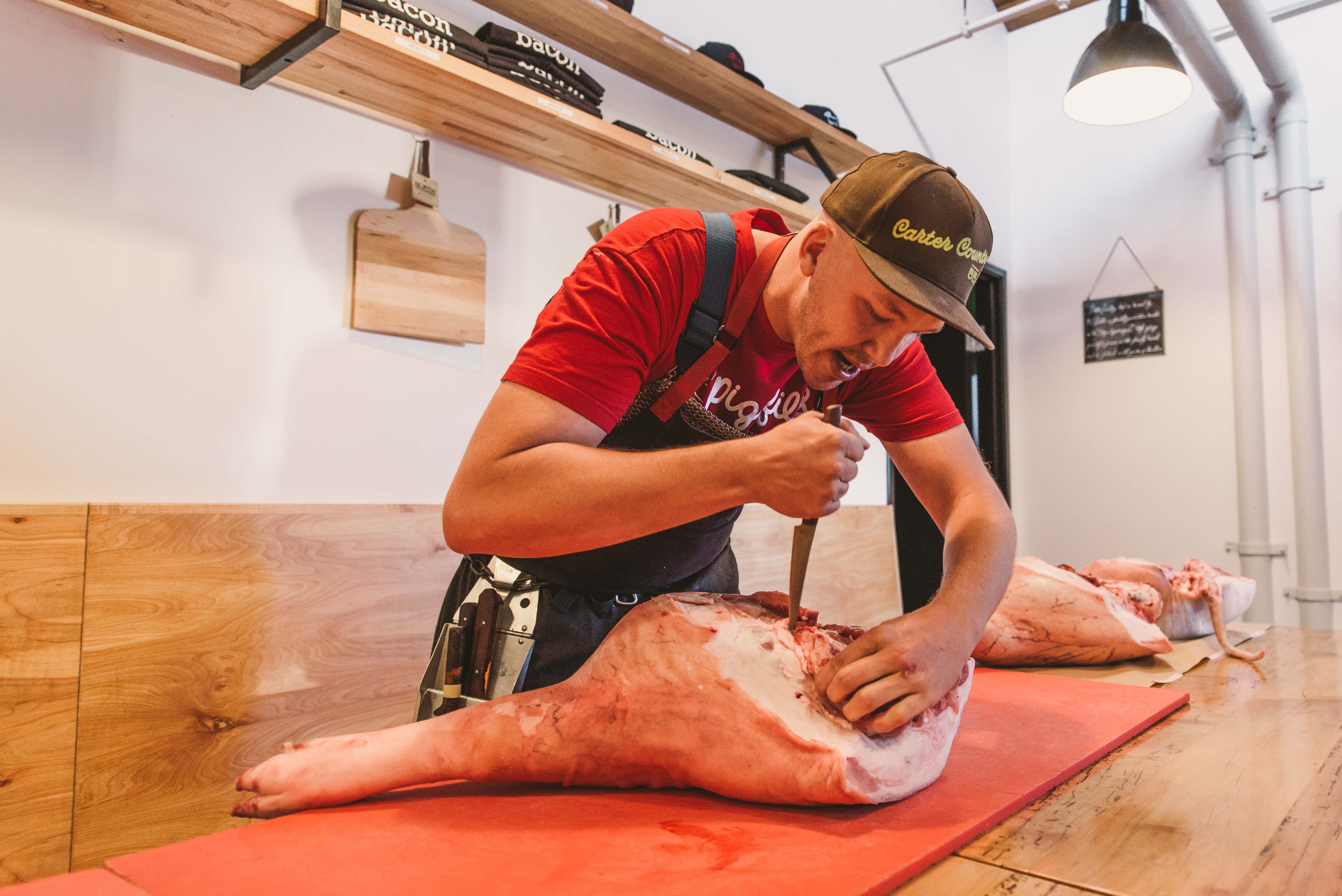 Singer opened the proceedings saying, “we’re going to discuss heritage breed hogs and what we do with them here at Blackbelly.” His presentation involved a fair amount of discussion about tools and technique that was more informative than practical for the audience — none of whom were serious butchers. He sliced and diced with precision, discussing the German-made chain mail he wears under his apron, his background as a steakhouse butcher and his tenure at Blackbelly practicing a different, European style of butchery. The crowd was made up of a group of people on a company outing, a trivia prize winner, a mailing list recipient, a home-chef interested in learning about types of cuts and a guy who wandered in because he “shared [the] same parking lot” — not a career meat vendor in sight.

The September menu was a strong and filling example of what Rosenberg and Singer often have in store. The evening opened with a selection of house-cured meats. Koji ham, long ham and culatello were presented alongside house-pickled vegetables. The koji ham had a miso-like flavor imparted from having been aged with the Japanese mold. The culatello was prosciutto-like, undergoing a much longer aging process — 18 months on-site. Next up were the crispy pig’s feet — small breaded pastries made from aspic and served with sauce gribiche, a savory condiment made from pickled cucumbers, capers, parsley, chervil and tarragon. Course three was red pastrami on rye with a skin kraut. What was arguably the meal’s tour de force involved small, open-faced sandwiches with house-cured pastrami and a kraut made from pickled pig’s skin. In lesser hands, the relish could have come off as overzealous hipster nonsense, but the flavor proved that this was not just novelty disguised as quality. Lots of experimental food winds up being more trendy than good — but not here.

The unrelenting meal only got more sturdy as it went along. Course four was the grilled ham steak over hock-braised collards. The dish was certainly succulent and balanced, and despite its inherent quality it wound up being somewhat trite when set against the revelation that was the pastrami. However, course five proved that the food did not need to be innovative to be sublime. The BBQ plate was ribs, pulled pork, house-made beans and cornbread with whipped honey-butter. The massive platter’s arrival was a frightful reminder that the previous dishes had been all too easy to graze on — these were the only plates that left without being fully gobbled up.

Next month’s event will open with the hind section of the cow, with the following sessions moving up the other two segments. Rosenberg said he is interested in potentially doing birds starting next year, citing the greater probability that the information could be more valuable for a home kitchen. In the meanwhile, the events provide an interesting way for people to establish a greater connection with their food, by vividly displaying one of the important links found between farm and table.