If you have had a fresh catch in our lovely land-locked state then you are likely to owe that experience in large part to Seattle Fish Company. Don’t let the name fool you, Seattle Fish is a third generation Colorado, family-owned business that began on the platform at Union Station in 1918. The company strives for sustainable practices and in celebration of 100 years as Mile high’s seafood specialist, it is hosting a 100-year Symposium and Anniversary party at the McNichols Civic Center. The symposium (happening August 15 and 16) will round-up innovators, leaders, suppliers, chefs, policymakers, and ambassadors of sustainability for a two-day convention to discuss what we can do now to sustain 100 more years of fresh seafood.

303 Magazine stopped into the Seattle Fish Co. headquarters prior to the symposium to sit down with James Iacino, the third generation President and CEO of the company and hear more about his family’s history in the Mile-high and their work towards sustainable practices.

Seattle Fish Company got its name from Iacino’s grandfather Mose — who began his family business hand selling oysters bartered from chefs heading east on the railway from Washington. At the time, train cars had chefs assigned to accommodate travelers on their journey over the Rocky Mountains — Mose built a relationship with one chef in particular who was making consistent trips from Seattle through Union Station in downtown Denver. Mose wheeled his fresh oysters over ice and on a cart through LoDo. He had something no one else was offering — coastal cuisine. Delicacies the mile high market had largely been unacquainted with slowly became popular by demand as the supply to the city became more and more consistent. After finding success in pushing oysters on the street, Iacino’s grandfather expanded his service to a small market space. At the early age of 16, he founded Seattle Fish Co. and made a name for himself supplying some of the city’s first fine dining venues like The Oxford Hotel and The Brown  Palace.

Iacino’s father took over the business during a technological revolution and witnessed the dawning of the freezer to the company’s advantage. The advancements in refrigeration expanded the reach of Seattle Fish Company outside of the state lines of Colorado and even more importantly, beyond the scope of the fine dining community. Seattle Fish was operating the largest freezer west of the Mississippi at the time and with that capacity came to an expansion into retail sales.

Today, Iacino and the modern day Seattle Fish Co. are servicing 17 states — sourcing product from all three American coasts and also from countries as far away as Iceland. The mission is not only to help supply Denver’s top restaurants and chefs with a fresh, inspirational product, but also to serve the home cook. If you shop for groceries at King Soopers or Whole Foods in the region you are eating Seattle Fish Co. products. 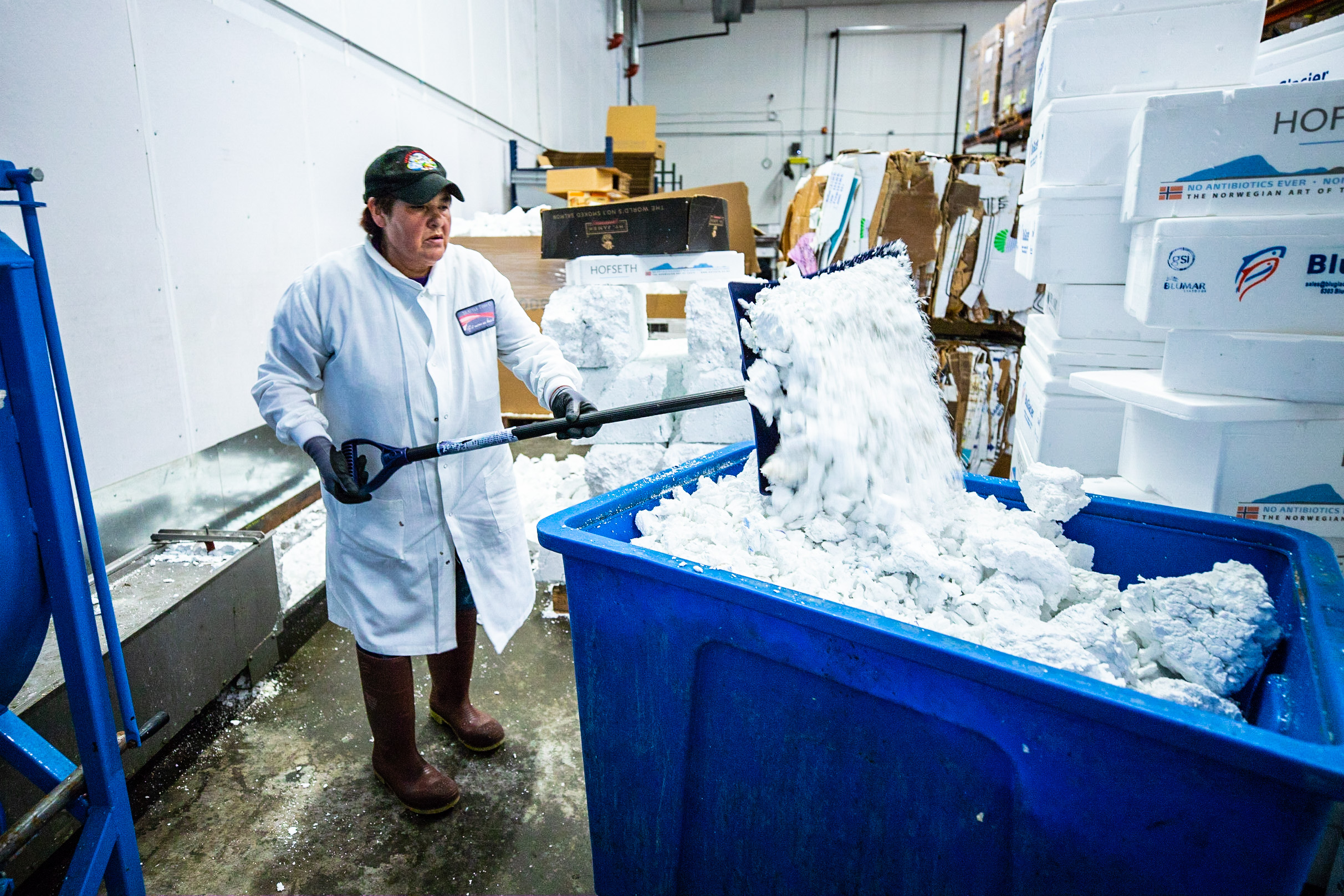 Our tour of the facility quickly became a step-by-step walkthrough of the company’s sustainable practices. The first stop on our tour was “the styrofoam room” where the company condenses its styrofoam packaging for repurposing. By repurposing the styrofoam byproduct occurred from a 24/7 global fish trade, Seattle Fish Co reduces 83 percent of its landfill production yearly. After breaking down styrofoam on-site the company packs it out to China where it can be repurposed and recycle.

“As The Colorado restaurant scene has grown, we have been the ones helping chefs find the seafood to get creative as they want to be creative…while pushing for an edge on sustainability and really talking about these issues,” said Iacino

Our second point of interest on the tour was dry storage. While the company has its roots in the sea, it also has a history of working in cooperation with local businesses on the ground to get the product to consumer efficiently. This may not seem like a big step, but by sharing freight line, the company is reducing the food industry’s overall carbon footprint. With that much in motion and trucks rolling seven days a week Seattle Fish Co. is making sure to get the most out of miles traveled.

The remainder of our tour was frigid but impressive. The warehouse is truly a haven for the pescetarian — gigantic coolers house everything from Red Snapper to Loch Duart salmon and Alaskan King Crab — stock even includes up to 70 different types of oysters during the season. We saw copious amounts of exotic and domestic seafood — alive, frozen and fresh on the chopping block — it is all here.  While product variety is key, the company also specializes in tailoring specific butchering programs for individual clients needs to help reduce waste and increase efficiency. Because any and all processing is done in-house, it gives chefs and clients the ability to call in specific orders. Programs can be as unprocessed as an entire albacore tuna or as specifically tailored as pin-bone out trout fillet. A chef can even call for less common cuts like, for instance, halibut collars (pictured below) — which can be used for things like bone broth. 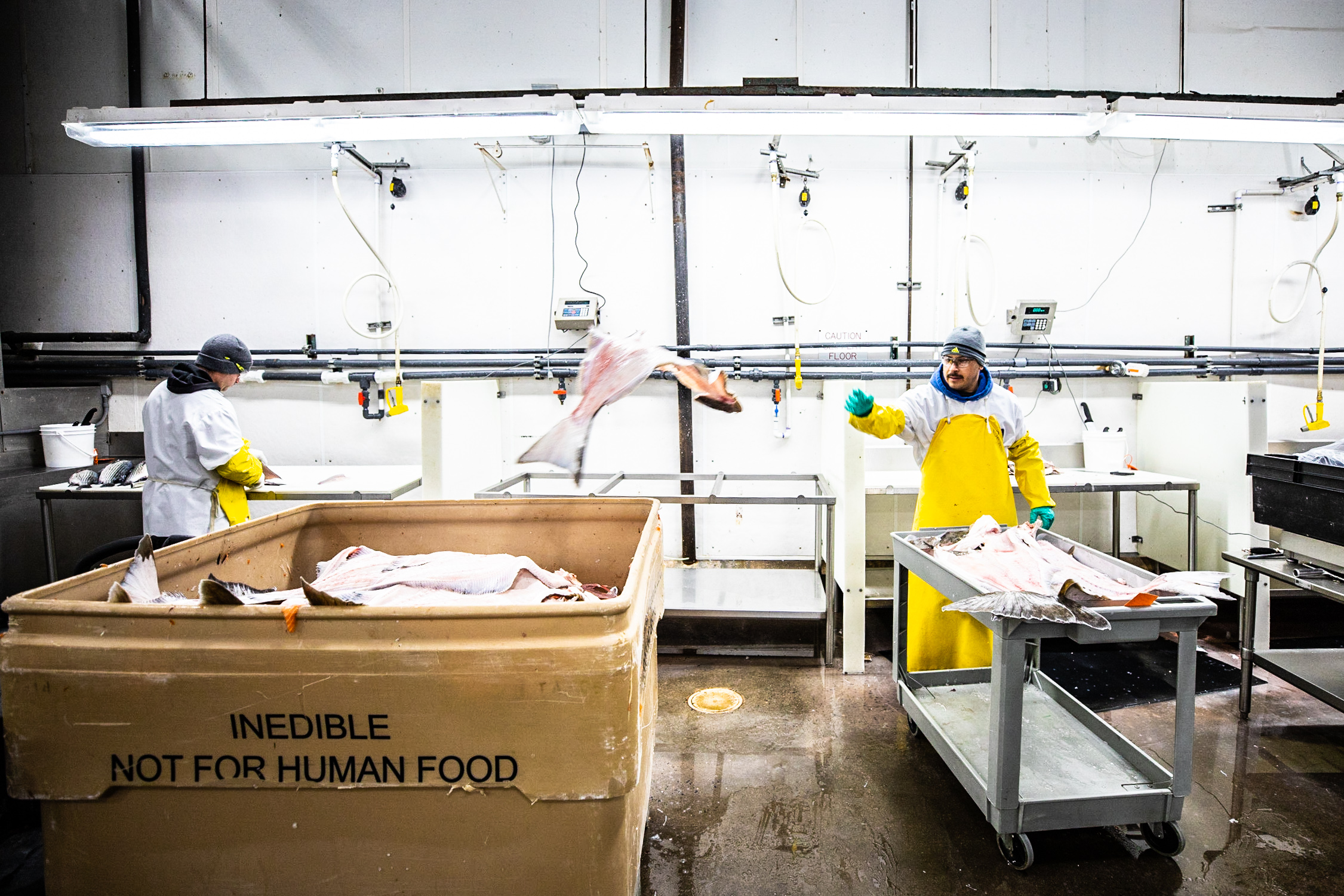 Amongst other ongoing efforts to promote sustainable practices, the company has invented a scoring system to help chefs measure the sustainability of their menu ingredients. The process combines data from a series of conservation studies to create a scoring system to rate a menu, and although all of the company’s products are responsibly sourced and mindfully curated, some offerings are more sustainable than others depending on factors like location and seasonality. In addition to helping chefs curate a menu with sustainable ingredients, the company supports the community through several local non-profits — Cooking Matters Colorado specializes in educating families on how to extend a healthy food budget in the home — and also Project Angel Heart, which helps to tailor meals on wheels for the chronically ill.

“Farm raised fish is the future. It is the most efficient of all animal proteins to produce,” said Iacino.

According to Iacino, 50 percent of the global seafood supply today is wild caught. While this an impressive number, it is a number that must be moderated in the approaching years. Population is projected to skyrocket in the next several decades and with temperatures expected to rise, the future of global hunger is likely to rest in the open water.

The 100-year Symposium will address issues like the ones we touched on above, but it will also dual function as an anniversary party and an open forum for conversation about a sustainable food industry. The cost of admission is free, you just need to register online for access to a dozen hosted panels geared to discuss hot topics like “Everything you wanted to know about fish” and “Twenty-first Century food trends” The event will also give stage time to keynote speakers Barton Seaver and New York Times best-selling author Paul Greenberg both of whom have hosted previous TED talks on similar topics of interest. The Symposium is a two-day event beginning at noon with a networking session at the McNichols Civic center today, August 15. Any working professionals in the industry are encouraged to participate and everyone is welcome. Most panels will open to audience questions so come prepared to ask a few of your own.

Events begin at noon on Wednesday, August 15 and again on Thursday, August 16 with events beginning at 9 a.m. The McNichols Civic Center Building is located at 144 W Colfax Ave, Denver, CO 80202.