Art is not usually seen as a competitive activity. Mostly, artists are solitary workers who enjoy the freedom to express without pressure or limits. Even though the general art market may present some competitive situations, street art has always topped the gallery and fine art market in its tendency toward rivalries. Much like the hip-hop and skate cultures that graffiti spawned from, the world of graffiti and street art is best experienced with a little adrenaline and a little struggle. And the best way to incorporate that struggle in a tight-knit art community is through a friendly live-painting competition — in Denver’s case, it’s Patio Battle.

Hosted at Meadowlark Kitchen, Patio Battle pits four or five artists against each other in a two-hour artistic standoff. Using the same sized canvas, and limited to paints and markers (no spray paint is allowed), the artists must complete an original piece in those two hours, while a raucous crowd cheers and jeers behind them. It’s not an event for a sensitive artist, but also there is a sense that the artists are all on a team together, even if the crowd sees it differently.

“We are so surrounded with great artists here [in RiNo] and I just want a space to showcase all these talented people,” Casey Karns, owners of Meadowlark Kitchen commented. “All these talented people are in the neighborhood all the time. It’s really impressive, especially how they can complete a painting in two hours. It’s just really worth showing off to our customers and our community.” 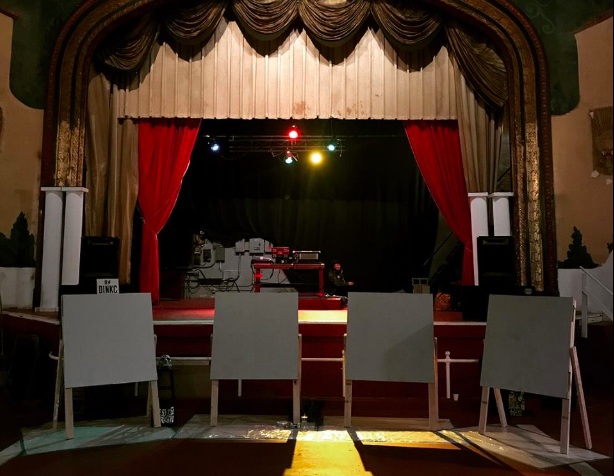 The setup for an art battle. Photo courtesy DINKC on Facebook

The first Patio Battle happened in April, when artist DINKC asked some other Denver-based street artists to compete. “I fell in love with my first ‘Art Brawl’ I did in NYC for Dia De Los Muertos in 2016 and since then have participated in random ones here and there, including Secret Walls,” DINKC explained. “I enjoy the raw vibes, feeding off the crowd, and really testing your skills with other amazing creatives going head to head. I always wanted to host my own version and Meadowlark Kitchen trusted me enough with it, and so it began! I never expected the first one to go so well but it was definitely humbling seeing Denver showing up to support the artists. I can only hope to continue pushing the envelope for it to grow, showcasing new talented artists, and keeping the spirit of raw illustrative battles alive!”

His competitors for that first match were Patrick Kane McGregor, Scot LeFavor, Casey Kawaguchi and Markham Maes (Shitty Kitten). McGregor took home the championship title — and for that first battle, it was truly only a title. He was decided as the winner based on cheers from onlookers. The canvases from each artist were sold after the event. 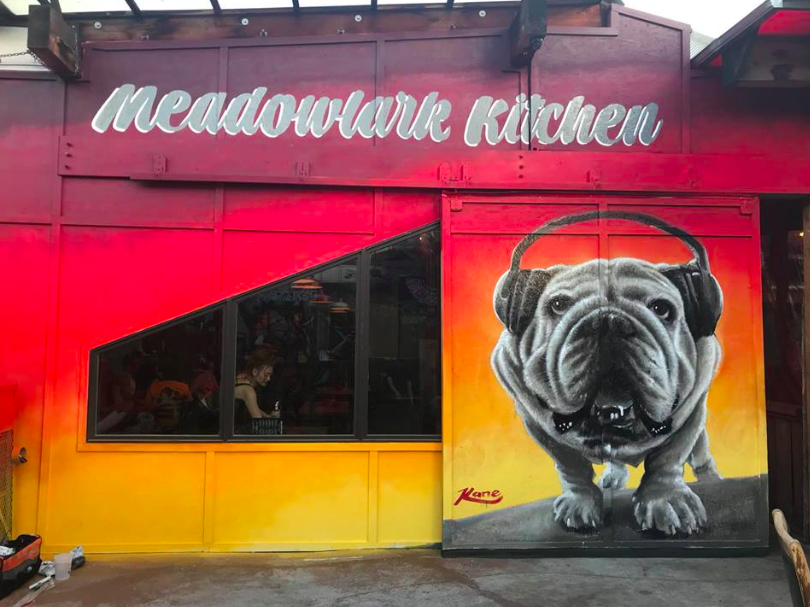 This upcoming battle on Thursday, August 30 will have slightly higher stakes and a different cast. Though DINKC is an obvious player — he started it, after all — McGregor is also competing again to defend his title. To change the lineup, this Patio Battle will also include Chris Haven, Grow Love and Kiri Leigh — the last two marking the first women to participate. Since the first battle happened on the eve of 420, most of the paintings centered on something weed related. But this time around, the theme is “Old School” — a loosely-defined suggestion that can be liberally developed by each artist.

During the battle, attendees must vote on their favorite artist — and though they can cheer and jeer all they want, the votes will be counted for accuracy this time around. Also, instead of selling the canvases after, there will be an ongoing auction open to everyone in attendance during the two-hours of painting. And the Patio Battle champ? This time, they’ll receive a grand prize, a trophy and a championship belt to hold onto until the next Patio Battle.