Comedians are Taking Over MCA Denver with “Shit Talk Tours”

–
Art galleries and museums are not necessarily known as places to have a good laugh. Unless you’re like the Museum of Contemporary Art (MCA) Denver and you invite comedians to give tours of the art. The new series is called “Shit Talk Tours” and it is happening four times this summer. The humorous talents of Pussy Bros. comedy troupe — a Denver-based group started in 2016 — will take over the museum. Pussy Bros. consists of Christie Buchele, Janae Burris and Rachel Weeks, all of whom will give a tour at the MCA.

“I think that people who are cynical, put-off, overwhelmed, scared, confused, or otherwise not interested in contemporary art will love this program the most,” explained Thad Mighell, the manager of programs at MCA. “I also think that people who are in love with contemporary art will appreciate the deprecating self-awareness that Shit Talk Tours offers, which aficionados will agree is not common in the industry. Humor is a universally effective tool to introduce people to things they may be unfamiliar with, which is exactly what this program aims to do.”

The first “Shit Talk Tour” is Friday, July 13 starting at 5 p.m. With just the cost of regular admission ($8 before 5 p.m. and $5 after) you are invited on the comedian-led tour of the galleries, where the featured comedian will offer their opinion of the current exhibitions. Don’t take the title wrong, though, the comedians won’t be “talking shit” about the art — rather, they’ll focus on the “pretentions that surround art museums” as Mighell clarified.

READ: Four Artists Take Over the MCA with TV, Discussions of Race and Gallons of Honey

As far as we know, no other museum or gallery has taken this approach to their art exhibitions, although the MCA was inspired by the Hammer Museum, who created a video of Will Ferrell and Joel McHale visiting the Hammer Museum a highly conceptual installation called Stories of Almost Everyone. Mighell described how the concept began in earnest for MCA.

“During this year’s Fem Fest, a festival celebrating women and gender, all of the art in the museum at that time was created by male artists, so there was a natural tension between what was on view and the ethos of the festival. Instead of ignoring that dynamic, we thought it would be responsible and also kind of funny to call attention to it. So we asked one of our favorite local comedians, Miriam Moreno, to basically go through docent training to get a deep knowledge of the art, then use that information to lead a tour that pointed out the kind of impolite things we imagined people might be thinking, while also giving them a solid background about the work on view. Well, it worked better than we could have expected, and it was one of the highest points of participation for the Fem Fest audience, so as a result, we decided to spin that element of Fem Fest off into its own standalone program.”

And Shit Talk Tours was born. 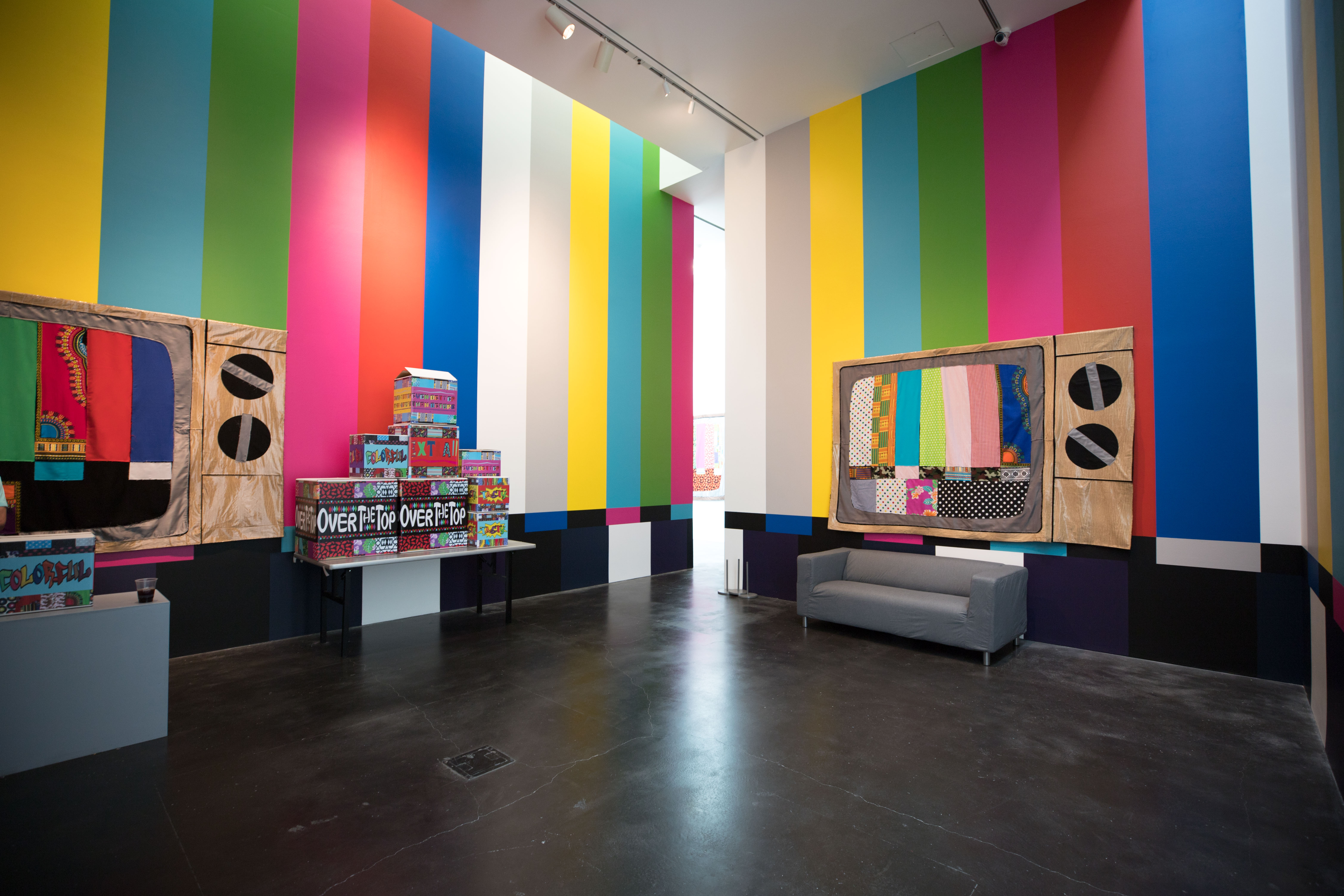 Art by Derrick Adams as one of the current MCA exhibitions. Photo by Heather Fairchild

The first comedian for the tours will be Christie Buchele, with a bio on the MCA website reading “she hates you, but she still needs your approval and would also like your money.” Buchele, a Denver native, often creates her jokes from a mixture of heavy sarcasm and biting realism — accentuated by her blatant discussions about her disability. She’s been featured at Denver’s High Plains Comedy Fest and Hell Yes Festival in New Orleans and also co-hosts a relationship advice podcast, Empty Girlfriend.

After that, there will be three more tours, two led by Burris (July 27 and August 10) and one led by Weeks (August 24). Burris is originally from Los Angeles but now calls Denver home. She regularly performs at Comedy Works and is a co-host of The Denver Post‘s “The Cannabist Show” online. Weeks came from Chicago to Denver and also performs frequently at Comedy Works, as well as having appeared on NBC’s First Look, Seeso’s Hidden America with Jonah Ray and the RISK! podcast.

So whether you decide to stop by to have a laugh or to enjoy the art, the MCA will just be glad you stopped by because ultimately, the tours are designed to foster more appreciation for the art (rather than take away from it). As a final explanation, Mighell said “we didn’t get permission from the artists to talk shit about them or their art. I hope they have a sense of humor… and in my experience artists do. For example, one of the best moments of my job came when artist Brian Bress stopped by our office and read aloud some of our scathingly negative Yelp reviews. Some of the feedback was even specifically directed at his work, yet he never took it personally. We take our love of art pretty seriously, therefore we don’t have to take ourselves so seriously.”

Read our review of the current exhibitions here.

The MCA is located at 1485 Delgany Street, Denver. No reservations are required for “Shit Talk Tours” — just show up with a good sense of humor.