Since the ’70s, Eagles have been known as one of America’s most popular bands. The group has gone through decades of ups and downs, including member changes and deaths, record-breaking album sales and more than one reunion tour. After their infamously messy breakup in 1980, Eagles fans rejoice in pleasant shock every time the band graces a stage in their area. In 2018, they brought another reunion, this time to a scorching hot Coors Field along with Jimmy Buffett and the Coral Reefer Band.

Before Jimmy Buffett would open the night to the parrotheads in the audience, singer/songwriter Caroline Jones gave the early birds of the evening a quick performance. After a melodic (albeit somewhat campy) track about living her life with bare feet, she chartered her audience with both a Joni Mitchell cover and ended her set with a Mac McAnally song, along with the Coral Reefer himself.

Jimmy Buffett is a man of all trades, having careers in music, writing and restaurant ownership, but at Coors Field last night his expertise remained solely of the tropic-rock kind. While the Caribbean-rock creator entered the stage on time, which is foreign to island-folk, Buffett’s ensemble channeled a fresh-off-the-boat look, with a blue, airy button up and a lack of footwear. Beach balls catapulted all over the atmosphere on the floor while intricate backdrops showcased scenes of the ocean, beach and all things tropical, which felt appropriate in 105-degree heat.

No one can accuse Jimmy Buffett of not knowing how to throw a good time, and his performance last night was continued proof that this sailor’s still got it. “Pencil Thin Mustache,” one of the first bits of the set, garnered thousands of voices singing along, which echoed throughout the stadium. After the island vibes had flowed for a few more songs, Buffett brought out Jones to assist him in “Come Monday.” “Cheeseburger in Paradise” stole the show from his tracklisting of the night, which came as no surprise. Along with hats shaped as parrots and sharks, many adults wore cheeseburger-shaped duds on their heads, and it did not look remotely as ridiculous as it sounds. Jones joined the band again for “Margaritaville,” a timeless classic which grooved many of the fans into an ideal mental retreat in the smoking Denver weather. 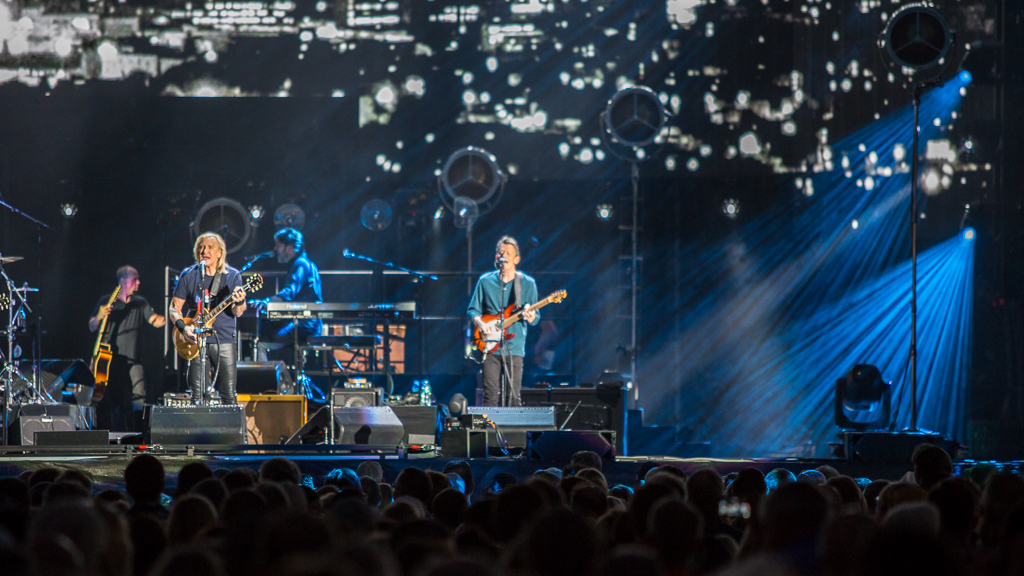 Eagles quietly took the stage after Buffet, and gently slipped the crowd into their set with “Seven Bridges Road.” After picking up the pace with the next few tracks, some of the members showcased their ties to Colorado, which included Joe Walsh confessing that at one point he owned the Pioneer Inn in Nederland, Colorado. In addition, Deacon Frey, son of deceased frontman Glen Frey, took his dad’s place on stage in a Bronco’s shirt and mentioned he has spent time in Boulder. After the cheers of support died down, the band shook the charmed venue with mega-hit, “Take it Easy.”

Also on stage supporting the lost place of Frey was legendary songwriter Vince Gill. Gill rocked out fan favorite “Take it to the Limit,” as a set of stringed instruments flourished behind the band, which already consisted of five guitarists. Much like Buffett’s set before it, the backgrounds shifted behind the icons to show relevant scenes to coincide with the vibes of the long-adored songs. However, one trait that is unique to the Eagles is their ability to share the stage which allowed each member to sing, solo and joke with the crowd for a full experience. Walsh hammered out “In the City,” Timothy B. Schmit softly coraled the crowd with “I Can’t Tell You Why,” Vince Gill returned with “New Kid in Town” and Deacon played homage to his dad once again with “Peaceful Easy Feeling,” after which a photo of Frey was displayed and a moment was taken to honor the departed star. 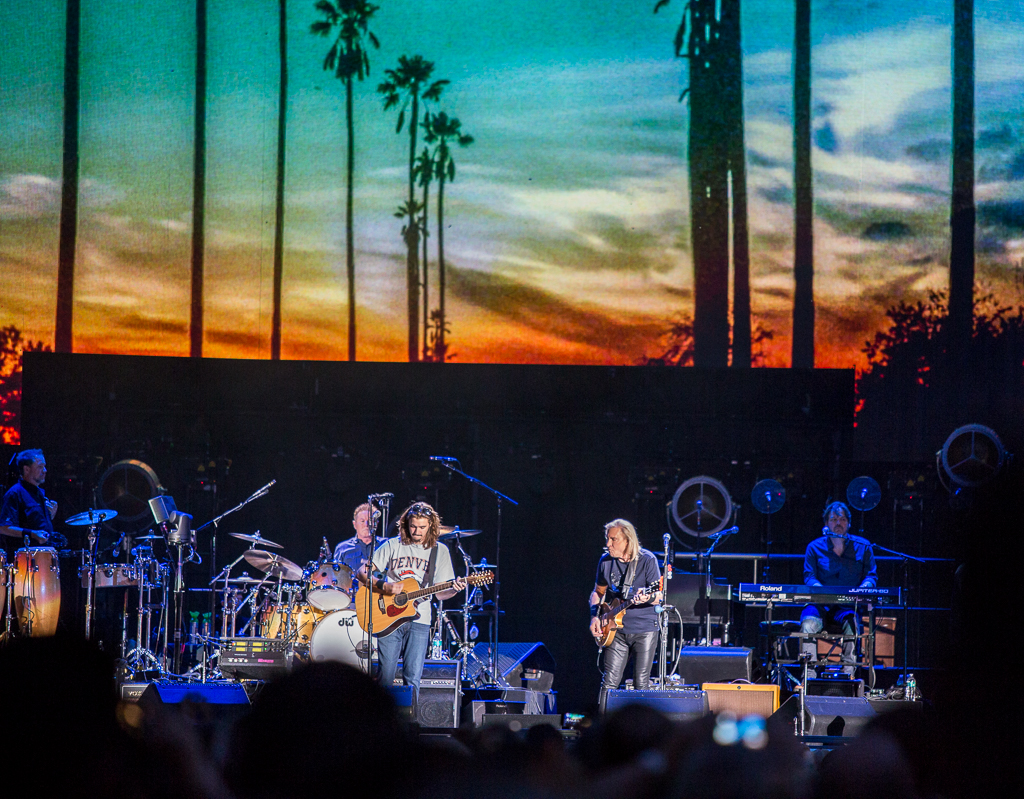 Any song Eagles play is sure to be a hit that induces nostalgia from some floating memory of the past. No track played last night fell short of uproarious support from the crowd. When the band left the stage after “Life in the Fast Lane,” the air had not cooled down at all and screams to get them back out nearly punctured eardrums. The horn section burst the encore of “Hotel California” to get them to return, and another retreat backstage followed. However, they were not finished. After returning a second time, it was the appropriately executed “Rocky Mountain Way” and “Desperado” that closed out the night.

After a double-slab of two classic favorites, it was hard not to saunter out of the hot Coors Field without the fuzzy glow of nostalgia pulsating through one’s veins. Shows like this remind fans why they keep coming back for more, decade after decade. We know we’ll be lined up again for either of these expert entertainers.