In order to be a great chef, skills are important. Culinary school helps – proper form and an understanding of the tools of the trade can make or break a restaurateur’s success. Some very important aspects of cooking can be taught, and in order to triumph, they must be learned. But you can’t teach passion — perhaps the most important ingredient in any great art. Chef Natascha Hess, the mastermind behind one of the front range’s most exciting young food trucks, makes innovative pan-Asian cuisine with palpable enthusiasm that is wildly apparent in every aspect of the impressive project. They say food is love, and in the Ginger Pig’s case, you can feel the warmth, the devotion and the layers of community that underlie the project in each bite.

Hess’ culinary background is non-traditional, to say the least. She moved to Colorado the day after graduating college, spending her time working both in sports broadcasting and the highly admirable drudgery of divorce law. During college, she studied Chinese and lived in China with a host family. While overseas Hess cooked with the family each day, quickly falling in love with the fresh ingredients they routinely brought home from the market. So while her entry to the restaurant game was rather serendipitous, her love for Asian cuisine and her familiarity with the ingredients and styles was nothing new.

During a period of particularly pronounced disillusionment with the legal profession, Hess and her husband went to enjoy a meal at the acclaimed Denver restaurant Brazen. The two sat at the chef’s counter where they struck up a conversation with then executive chef Carrie Baird, of Top Chef fame. After Hess expressed an interest in cooking, Baird recommended that if she was indeed serious, an internship at a restaurant would be the best way to get in the game. Hess was intimidated by a lack of experience and made her concern clear to Baird. It was at this point that Baird offered to take Hess under her wing. What began as a chance encounter over dinner became the integral moment to a strong professional relationship and friendship that has allowed the Ginger Pig not only to exist but to thrive. 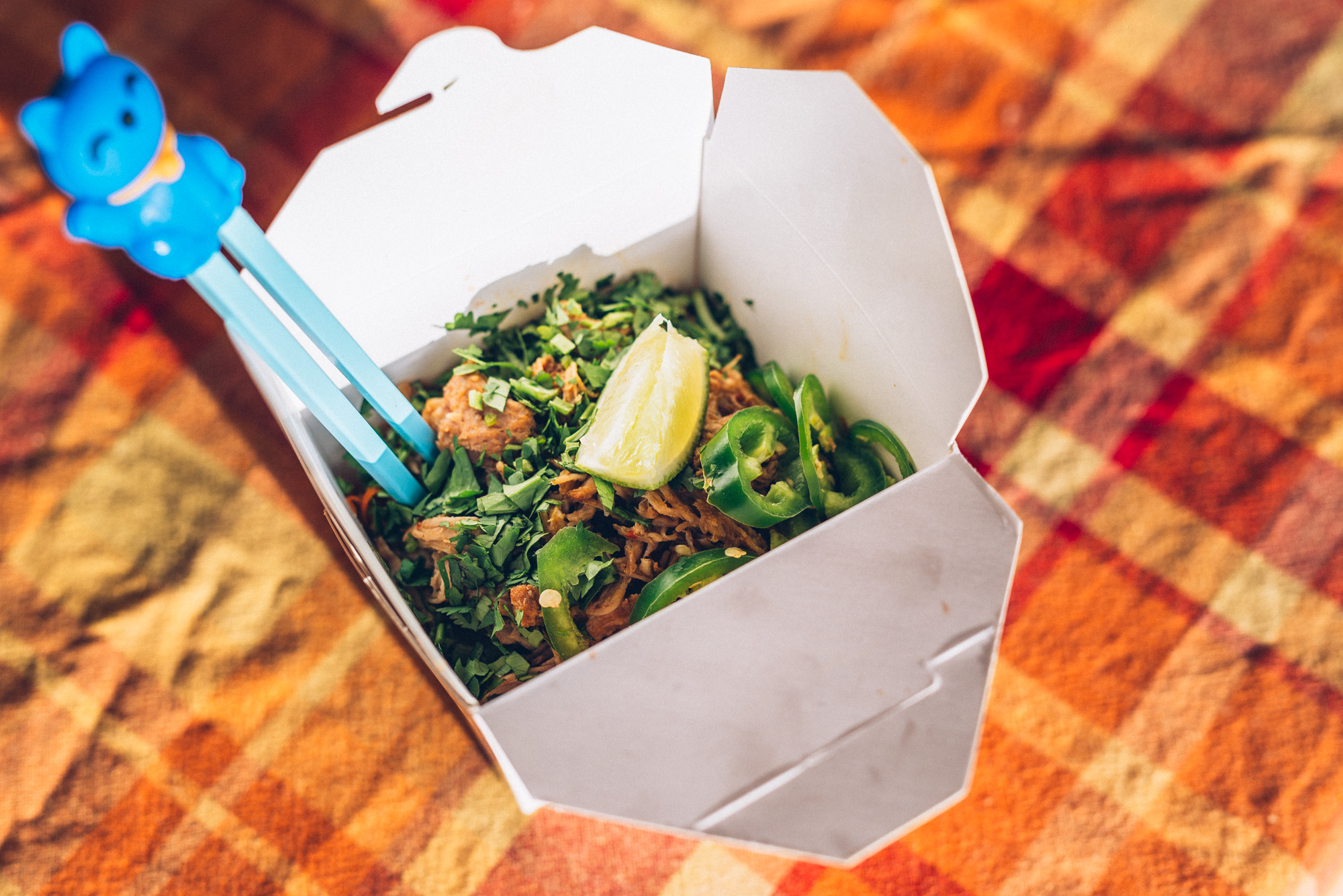 Hess spent five months working under Baird in a “boot camp” of sorts, quickly learning the essential skills, but more importantly realizing just how much love she had for the craft. Having grown up playing Division I hockey, Hess was excited to return to an environment where teamwork was paramount, something she had been missing immensely while working in law. Baird went on to join Hess for an additional four months on the truck, helping to get the Ginger Pig open in the summer of 2016. Hess utilizes local ingredients and has an extensive relationship with Isabelle Farm in Lafayette, where the truck can sometimes be found serving fresh food, making the farm-to-table aspect all the more dramatic.

The menu features a rotating set of seasonally inspired fare, complete with funny names that Hess hopes will make the cuisine more approachable to a food-truck crowd more familiar with loaded fries than banh mi and char siu. The Bangkok Balls ($7) are Thai red curry rice balls, a red curry drizzle and cilantro served with a house-made kaffir lime aioli — a truly standout sauce. The May the Pork Be With You ($13) is Chinese char siu BBQ pork served with jasmine rice and smashed cucumber salad. The pork is placed in a sous vide for 14 hours, giving the meat an incomparable tenderness. The PBR ($13) or pork banh mi rice bowl, is tender sesame-ginger braised pork, cucumbers, house-pickled carrots and daikon, spicy aioli, soy vinegar ginger dip, cilantro, jalapeno and jasmine rice. The bowl is also available with tofu ($11), and for the grain-free, the truck offers cauliflower rice for a $2 up-charge.

The truck can be found at the every Wednesday all summer long at the Boulder Farmer’s Market and every other Thursday at the Lafayette counterpart. It also frequently pops up at the Rayback Collective and will make a special appearance in Denver on June 16 for the TedxMileHigh event. The truck frequently does corporate catering events, and recently did a special event at the Tennyson House, a Denver based institution for disenfranchised children. “I definitely didn’t do this just to go to a brewery every day,” said Hess.

Most chefs are passionate and dedicated artists who devote long and difficult hours to a craft that provides little stability and no guarantees. Conviction is commonplace. But in Hess’ case, the zeal shines through undimmed — she is clearly somebody not only motivated by but deeply inspired from the opportunity to be able to share her creativity with the world. Shy to take all the credit for the ongoing quality, Hess cites the layers of humanity that underpin the project — the farmers, her mentor, her Chinese hosts and the customers who make the whole thing worth it. If food is love, Hess’ heart is on her sleeve — the items a clear extension of a dream come true. 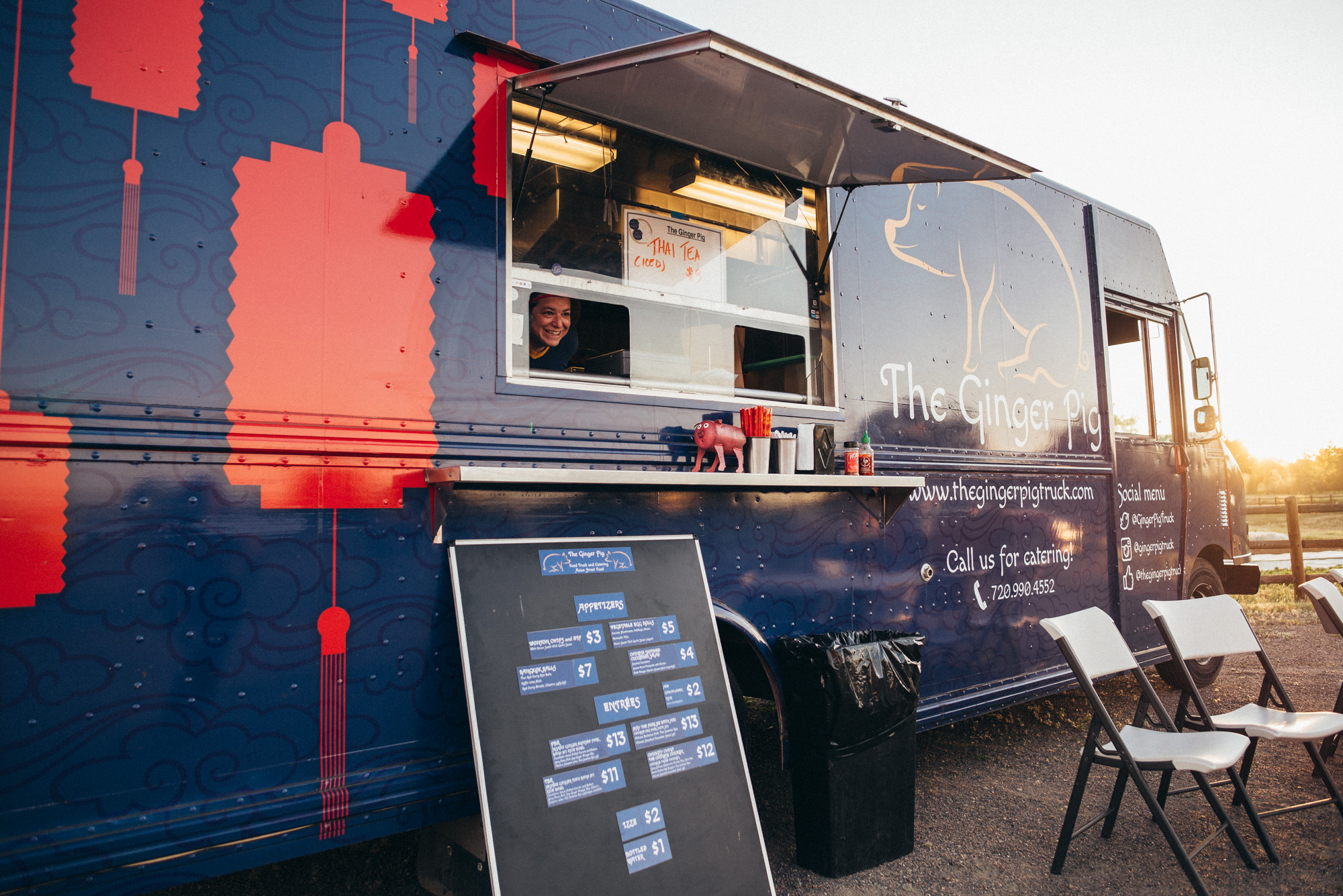